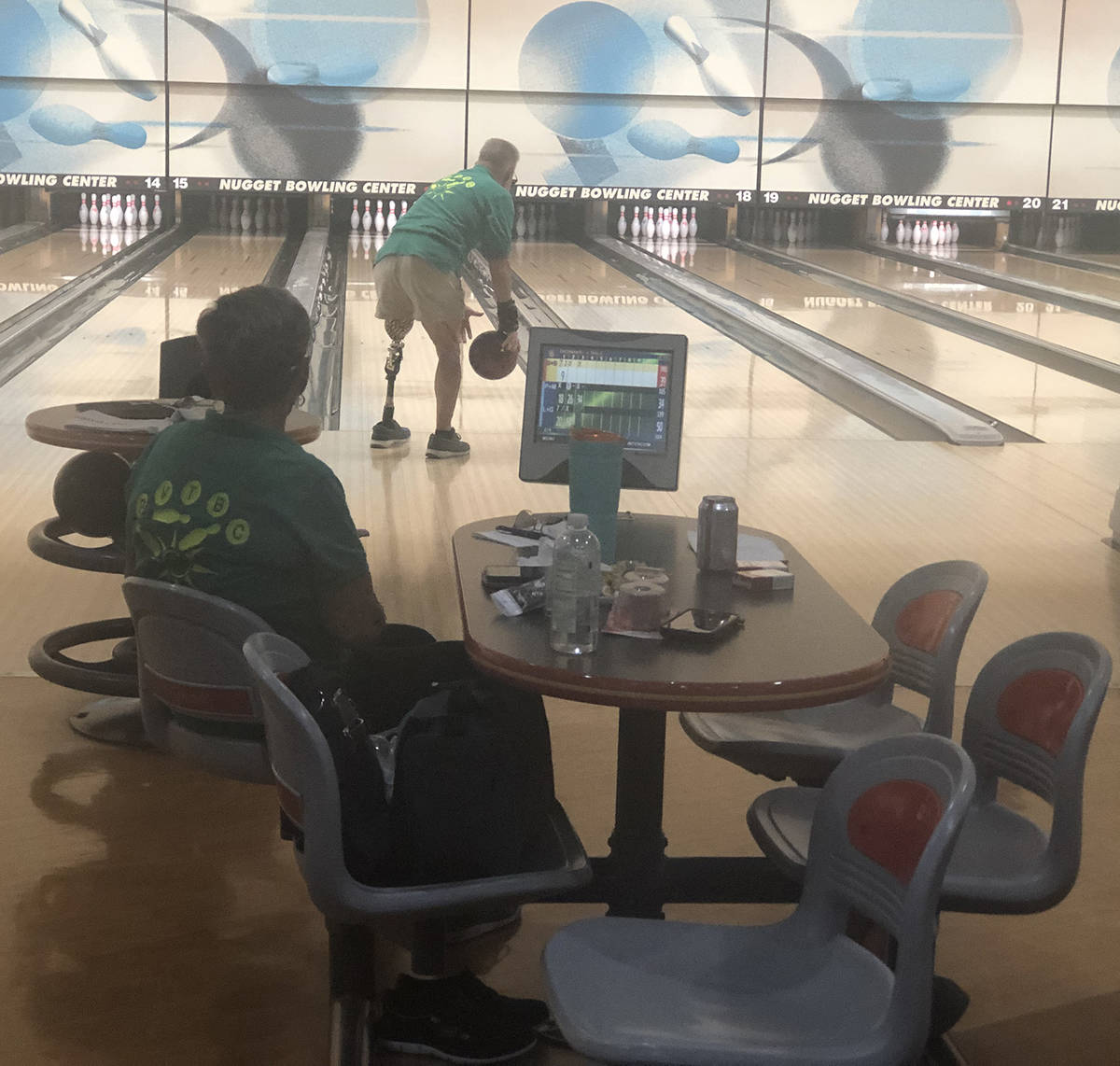 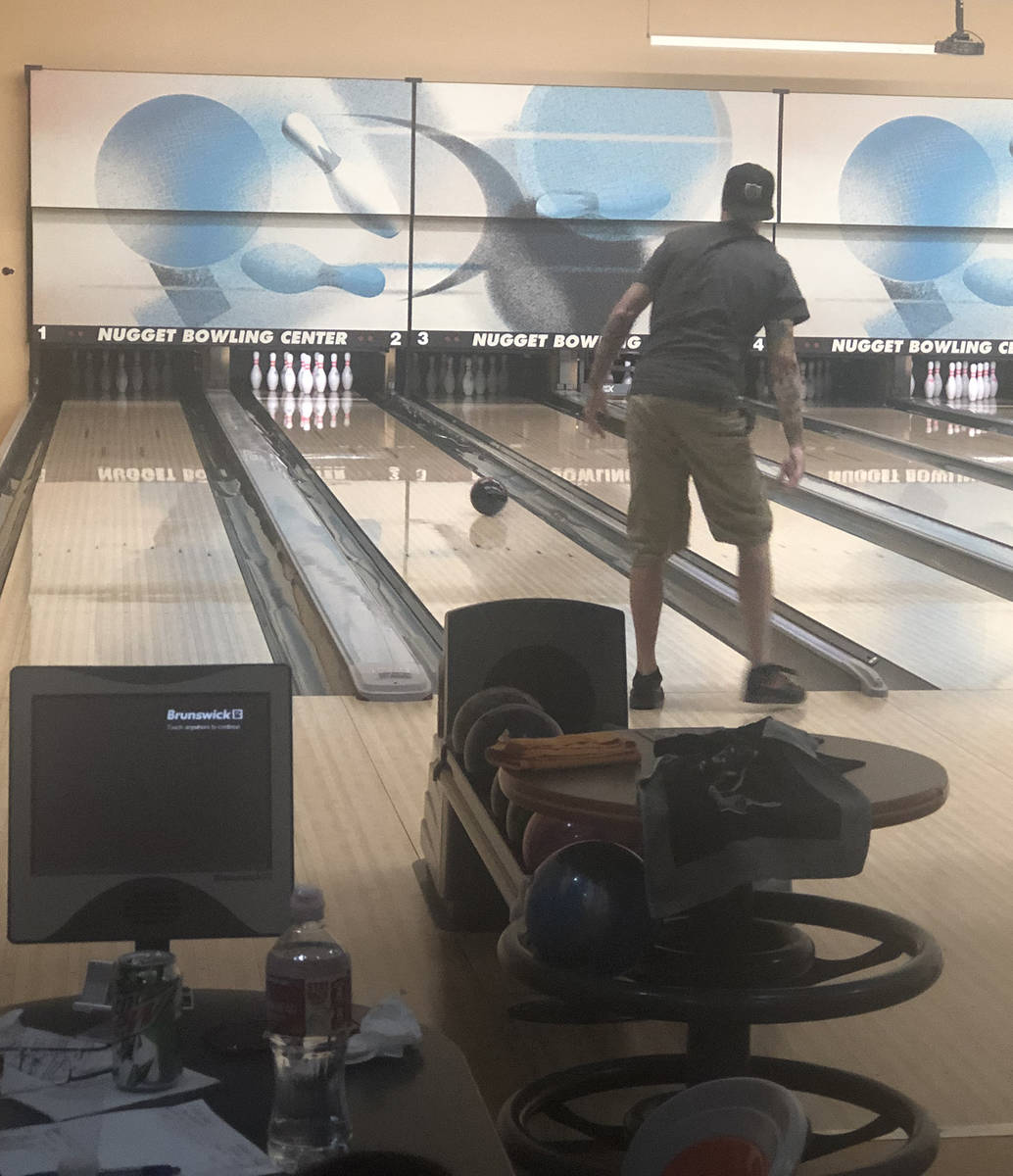 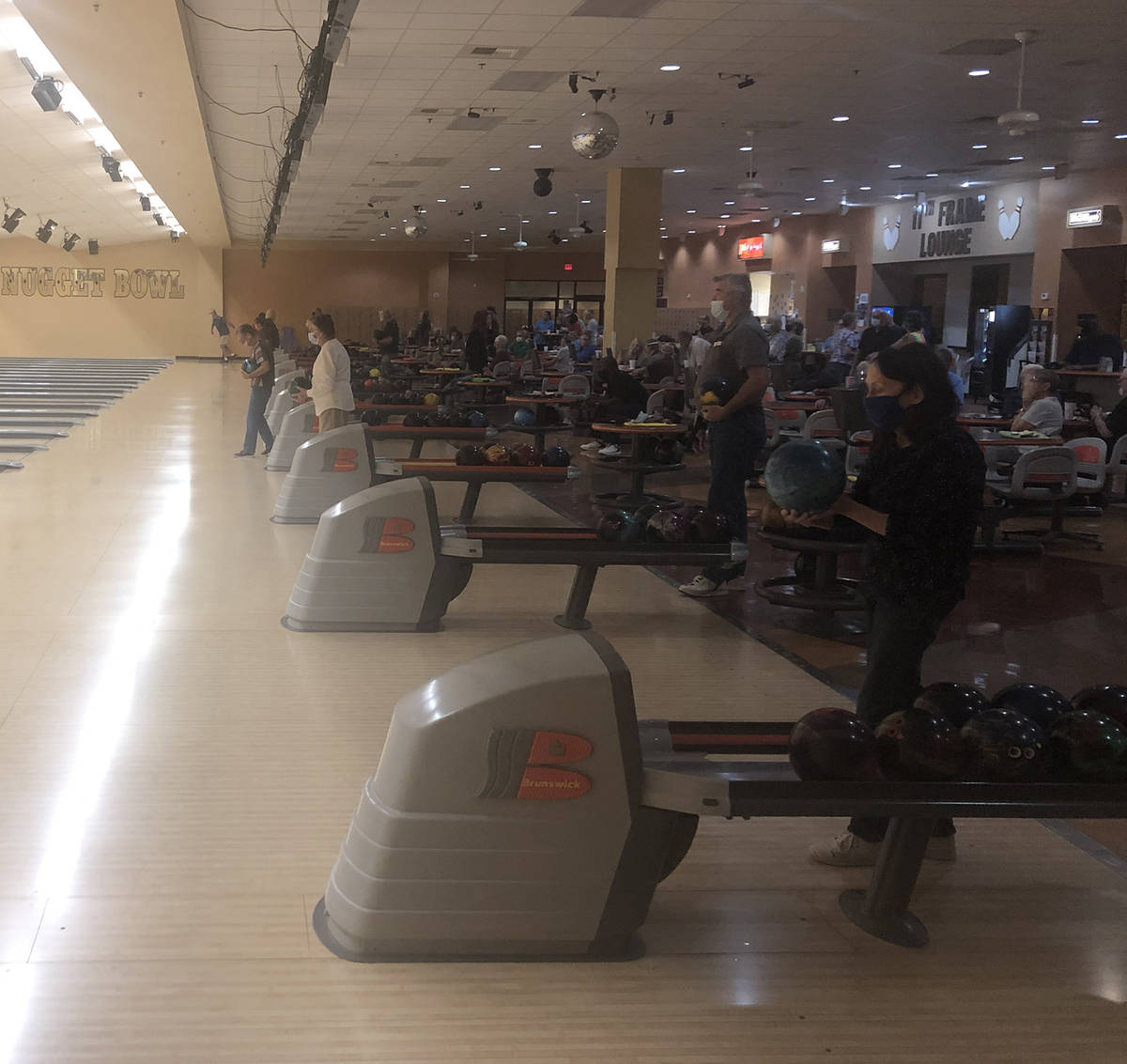 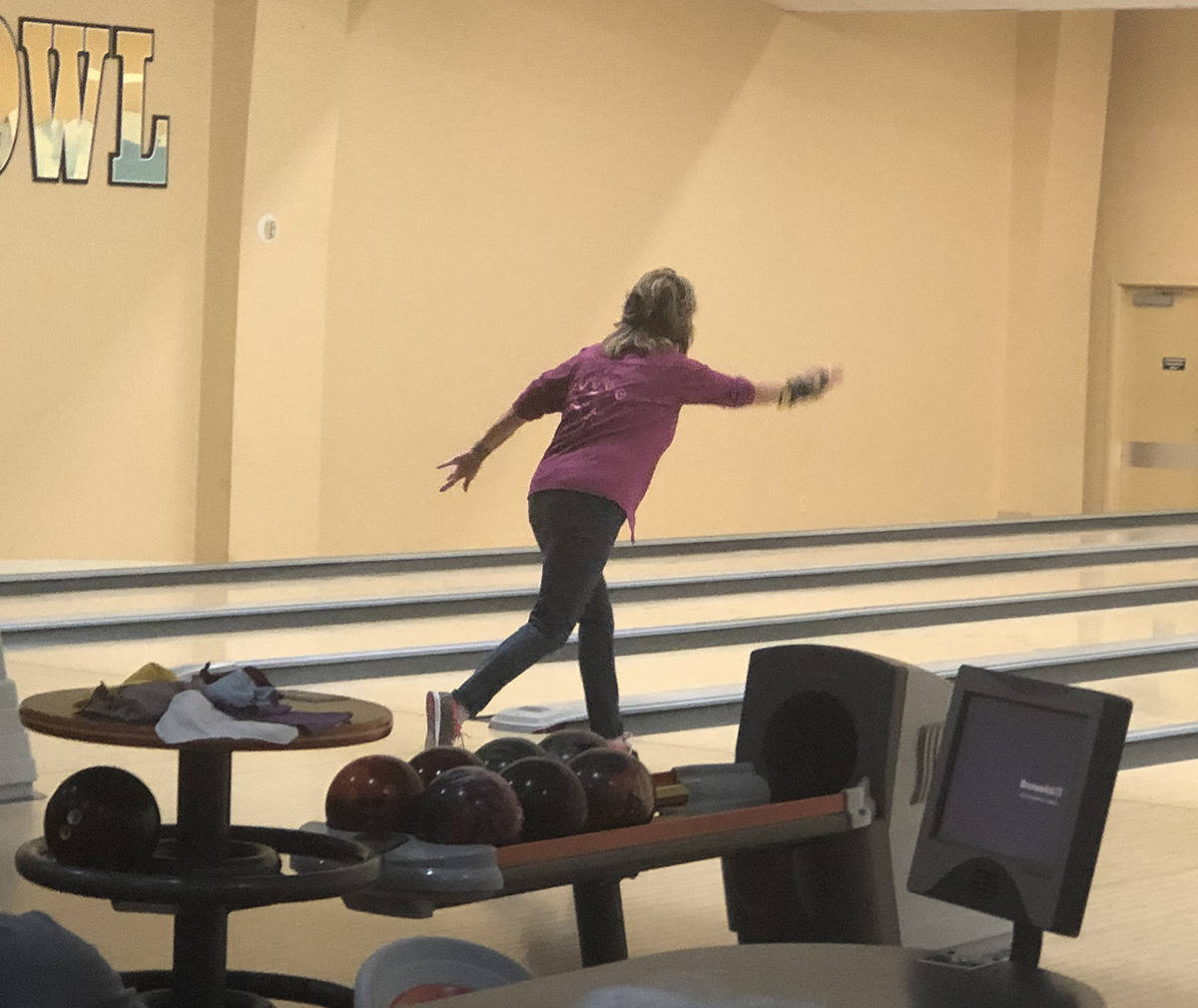 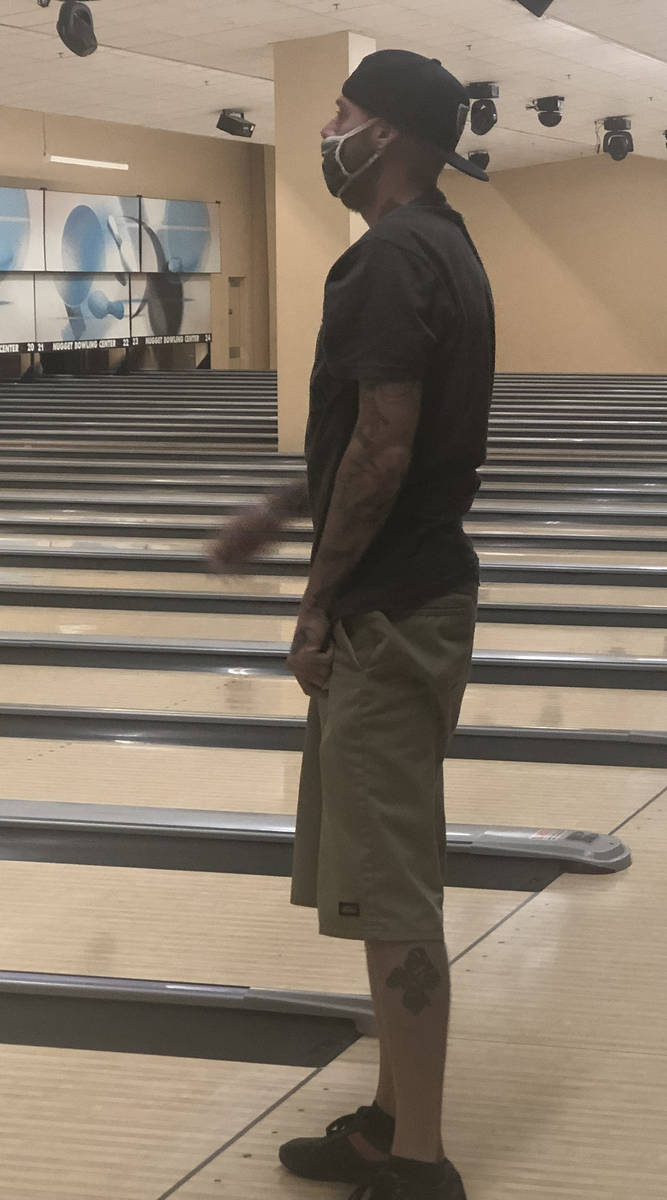 Tom Rysinski/Pahrump Valley Times Troy Smith stares at the result of his shot Saturday at the Pahrump Nugget. Smith and Linda Auger teamed to finish fifth in Division A in the Scotch doubles, no-tap tournament.

This time it was Scotch doubles-no tap, the former meaning bowlers were in teams of two, with one picking up what the other left, and the latter meaning rolling a 9 would count as a strike. Tournaments change formats, adding a bit of fun to the event.

Neilson bowled with his wife, Bonnie, which was not unusual. Many of the teams at the Nugget were married couples; a glance at the lane assignments suggests at least half of the teams were previously attached. So that’s not unusual.

The Neilsons are both 75, but there are bowlers of all ages in the PVTBC, so nothing unusual there.

But when Bill Neilson walks up to take his turn, that’s when he stands out in the crowd of bowlers. Neilson is bowling on one leg, with a prosthesis in place of his left one.

“It was an infection I got in my knee when I was in the military,” he said, noting he lost the leg in 1998. “The infection ate my leg off.”

So, naturally, take up bowling. Well, he had a little help with that idea.

“He had bowled in the past before he lost his leg, and when we got married and he’d go to the bowling alley with me and he noticed some of the seniors didn’t make the stepping approach,” Bonnie Neilson said. “They would go to the foul line and then bowl. And I said, you can do it.”

So it was that bowling became part of their honeymoon in Vegas. No, really.

“So when we were on our honeymoon out here in Vegas, I bought him a used ball and had it drilled for him,” said Bonnie, a league bowler since she was 16. “And I said, try it.”

“She encouraged me to try it again, and I said well I can’t take the four- or five-step traditional approach up to the foul line,” Bill Neilson said. “I’ll just have to go up there and stand there and throw the ball, and that’s what I do. And I’m having more fun than I ever had before.”

The Neilsons had a bit of extra fun Sunday, rolling games of 190, 233 and 222 that, with their 234 handicap, gave them an 879 series, good enough to win Division B and take home $140. The divisions are based on averages, with the higher ones in Division A, so most Division A bowlers have lower handicaps. On this day, handicaps ranged from 89 to 186.

One of the teams with the 89 handicap was Charity Musial and Joe Matassa, and both of them are among the more avid bowlers in the club.

“Probably about 50 years,” Musial said when asked how long she has bowled. But experience guarantees nothing, and Musial was one of several bowlers who said she was in a bit of a slump. What do you do then?

“A lot of people do a lot of different things,” she said. “If you have access to lessons, sometimes you go take a couple of lessons to kind of figure yourself out. In my case, a lot of times it’s called buy a new bowling ball. I bowl a lot. I bowl four times a week in leagues, so my bowling balls get used a lot.”

Musial said she bowled in a lot of tournaments before COVID-19 changed everything.

“I was struggling my first couple of weeks with this new system,” Matassa said, referring to the protocols put in place when the bowling alley reopened during the pandemic. “When you have to bowl on one lane with everybody it’s tough compared to bowling on two different lanes.”

“If we had both lanes, there would be way more people,” added Troy Smith, one of the Nugget’s more recent 300 bowlers. “But this is actually the biggest turnout we’ve had in a while. People didn’t want to come because people didn’t want to wear masks. But you can’t run away from bowling. If it’s your life, you’re going to come back.”

Smith is another one who regularly bowls in more competitive situations, as is Matassa, who bowls three nights each week in leagues with his son, Anthony, another recent 300 bowler at the Nugget — twice, actually — who now works the desk there.

“I’ve been here eight years, and this is where I’ve met everybody I know, right here at the bowling alley,” Joe Matassa said. “We have fun, and that’s all it is. If you can’t have fun, you don’t need to be here.”

And while they do keep score, and there is a pot from which the top competitors win money, but the PVTBC is more about the fun than any of that.

“They run a lot of different types of fun things, like gimmick tournaments,” Musial said. “Today we’re doing a nine-pin no-tap, which means if you get nine pins you get a strike. They do a snake bite, where if you leave a split you get a strike. And there’s whoops tickets, where you get to buy six tickets, and if you don’t like what happened in a frame you can use the ticket and re-do the frame.

“The tournaments make it fun and interesting and competitive for all types of bowlers.”

The structure must be working, because every lane the PVTBC could use was occupied on Sunday.

“I’m at capacity, which is 72 bowlers,” said Debbie Varner, the PVTBC’s secretary/treasurer. “We’re in every other lane, the masks are required, either the paper mask or the shields, and the social distancing is up to them but they have another area they can sit down at.”

With every other lane empty, there was seating available at adjacent lanes and, of course, seating behind the lanes where many bowlers retreated for snacks and drinks between frames.

“Before the virus, I would have 80-plus bowlers, which is pretty good,” Varner said. “It would be four to a lane, and I would have all the lanes.”

Varner’s efforts do not go unnoticed.

“Debbie Varner’s always got the best tournaments,” said Smith, who teamed with Linda Auger to place fifth in Division A and share $50. “She’s always got good layouts and great turnouts.”

The PVTBC will be back at the Pahrump Nugget at 1 p.m. Nov. 21 for a certified snake-bite/10 pin/no-tap singles tournament open to all club members.

“The first game, for every split you will reset the pins and take a strike for that frame,” Varner explained. “The second game is a regular 10 pin, the third game is a nine-pin no-tap. It is also our Turkey Shoot for all three games. Get a natural strike in the third, sixth or ninth frame of any game and win a Smith’s gift card. Only one per bowler.”