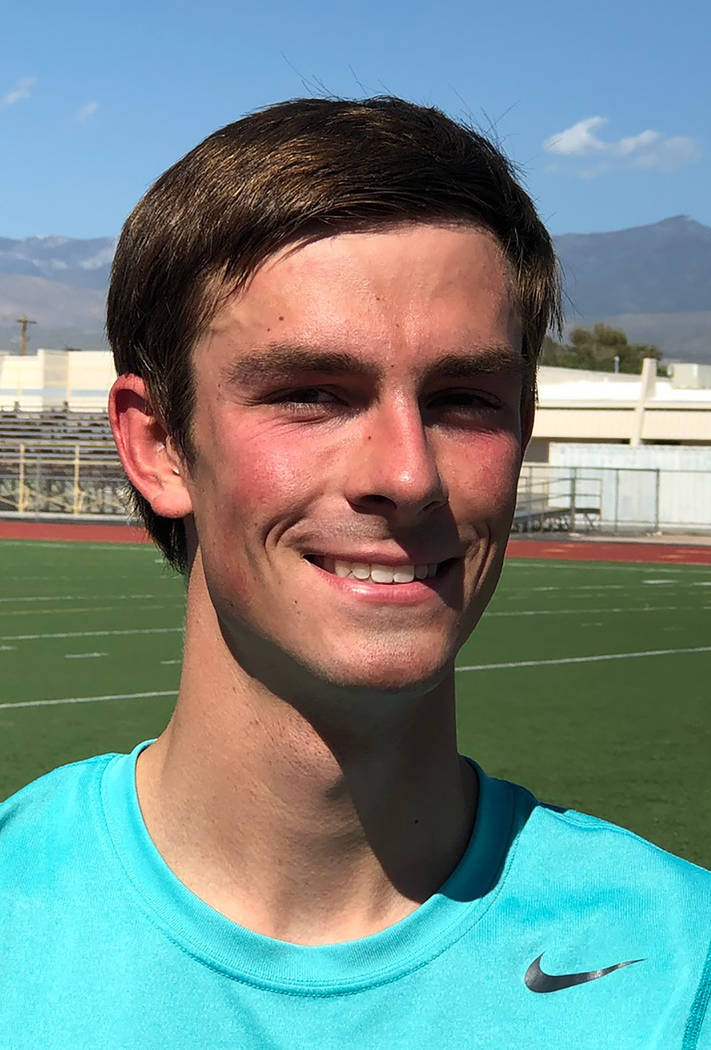 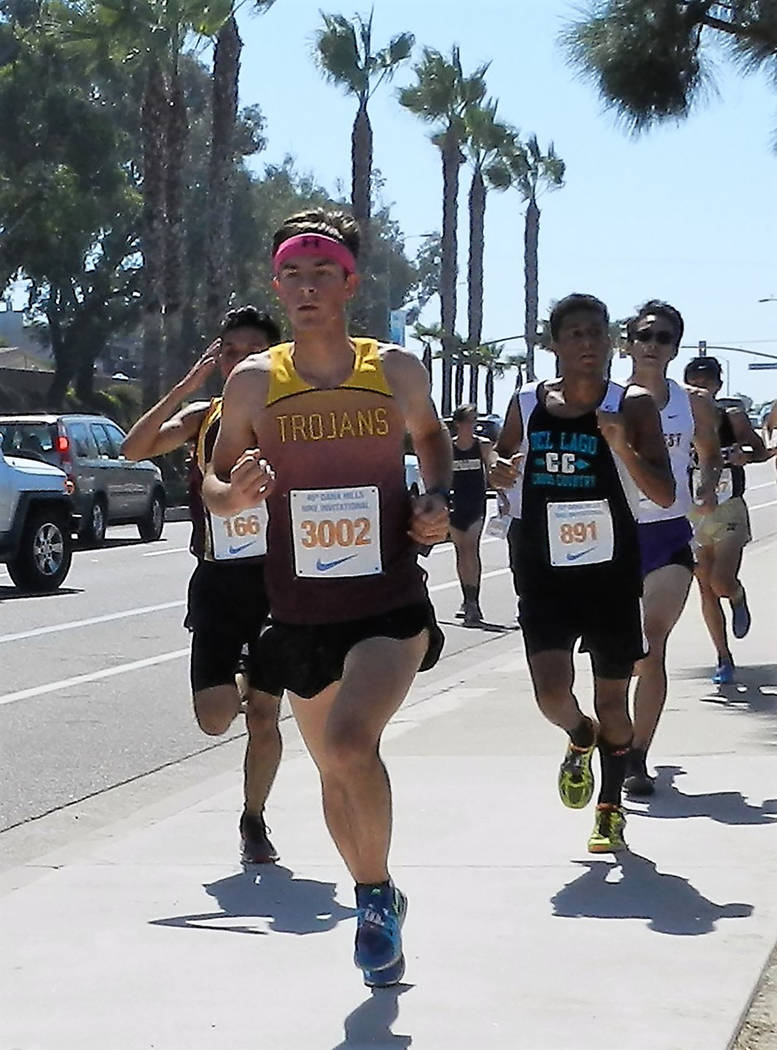 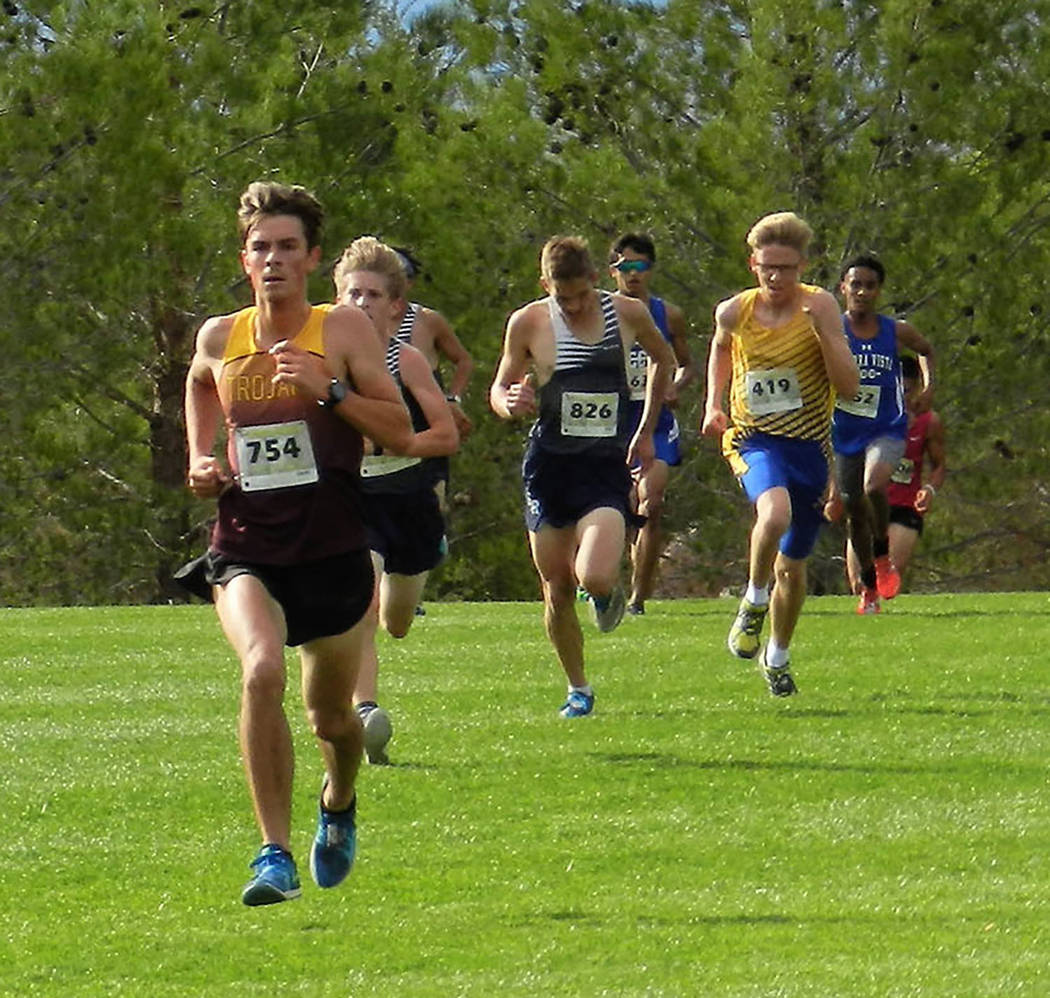 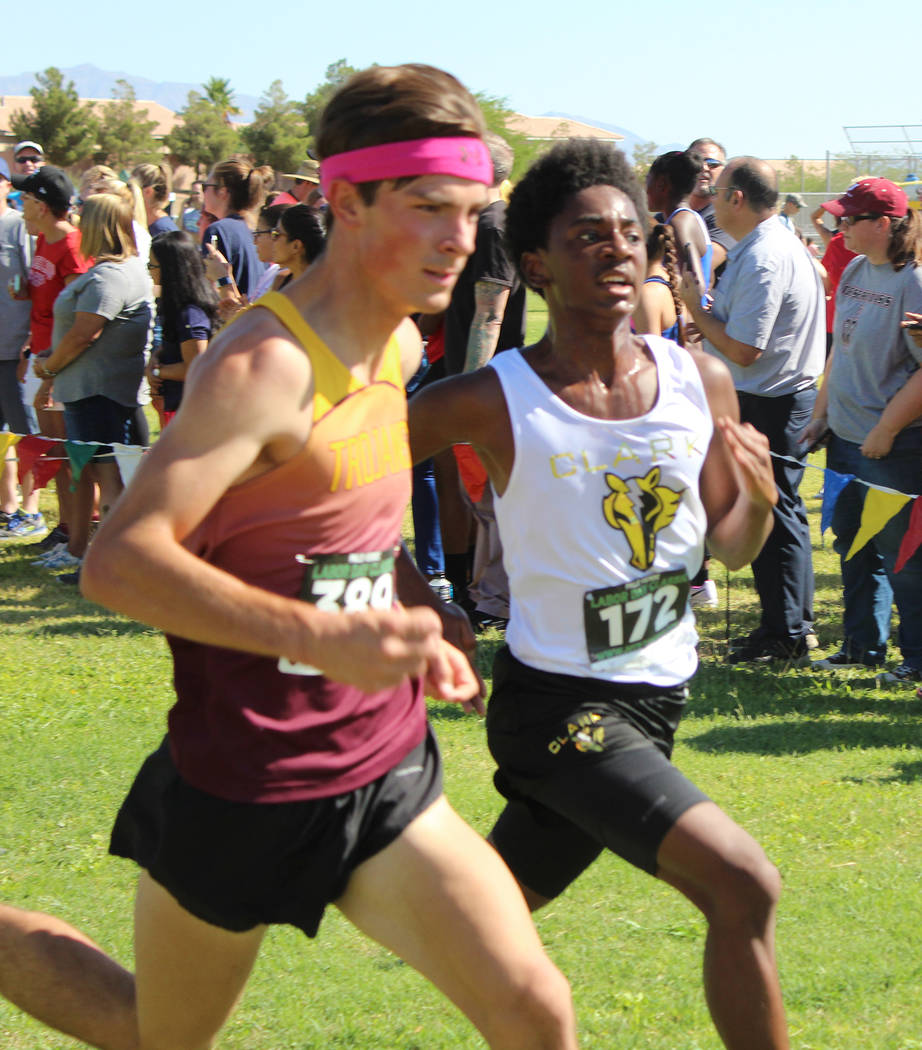 Ask Jacob Cipollini about what school subject gives him the most trouble, and it doesn’t take him long to come up with an answer.

“Social studies, history … not so much boring, but it’s hard for me to memorize everything that happens,” Cipollini said.

Ask him about his best sports memories during his athletic career at Pahrump Valley High School, and they come easily to him.

“My junior year in cross country when we won the regional championship,” Cipollini recalled. “The top five score in cross country, and I was the fifth guy that day. Coming across the line before anyone else’s No. 5, you could tell it was just a really good day and we had a good shot at winning, so everyone was really excited.”

How about from track and field?

“The first time I broke 5 (minutes) in the mile, last year at regionals,” he said. “I was in the second heat, the slower heat, and I just went out and stayed in first. If anyone tried to pass me I just sped up, and I came across in 4:52.”

About that memory thing …

Perhaps it’s just that much more impressive that Cipollini, who ranks fourth in a class of 279 as graduation nears, accomplishes so much in the classroom despite claiming to have more trouble, relatively speaking, in classes that require memorizing things.

Applying that work ethic to athletics as well as academics earned him recognition from the Nevada Interscholastic Activities Association as one of the top 10 student-athletes in Southern Nevada. The awards, which have been given out since 1998, cover all schools regardless of size.

“I was really happy because I knew it was a prestigious award that a lot of successful people in the past from our high school have won,” Cipollini said. “It was really cool to think that I’d be one of them now.”

“The spirit of the Silver State is embodied in high school athletics and activities,” NIAA Executive Director Bart Thompson said. “The top 10 winners we honored this year have achieved and maintained an exceptionally high level of excellence in all aspects of their lives.”

All candidates for the award must be seniors. They are judged on scholastic achievement, overall sports participation, other contributions, an essay and letters of recommendation. Winners received commemorative awards from the NIAA and One Nevada Credit Union, the sponsor of the awards banquet and the title sponsor of all NIAA postseason tournaments beginning with the 2019-2020 academic year.

Because of One Nevada’s support, the NIAA student-athlete scholarship awards increased from $500 to $1,000. The winners from Northern and Southern Nevada were honored April 26 at the Orleans in Las Vegas.

”There were probably about 100 people, some higher-ups from the NIAA and the CEO from One Nevada Credit Union,” Cipollini recalled.

“We’re proud to celebrate these student-athletes for their outstanding achievements in athletics, in their classrooms and in their communities,” One Nevada President and CEO Paul Parrish said. “Their commitment to showing up for themselves, their teams and their communities will help us build one Nevada that’s stronger than ever. That’s why we’re so pleased to award each of them a college scholarship in support of their educational journey.”

Cipollini’s favorite subjects are in the sciences, especially physics.

“Pretty much everything that happens in the world has to do with physics, and you get to learn about why things do what they do,” he said. “I think I took naturally to it. It’s a lot more straightforward to me than English. In social sciences you have to remember a lot of stuff, whereas in the sciences it’s more about learning a concept and then applying it to different problems.”

Of course, that works in sports. You learn concepts and strategies in practice and take what you’ve learned to conquer the course or the track. But Cipollini brought more than that during his senior season, with two of his coaches pointing to his ability as a leader.

“Jacob has a tremendous work ethic,” outgoing Pahrump Valley cross-country coach Matt Kolodzieczyk said. “Since joining cross country his freshman year, both his form and his confidence improved. He was always an integral part of the team, and as the lone senior this past season, his leadership was instrumental in our success.”

Craig Rieger, who coaches the distance runners during the outdoor season, had a similar view of Cipollini.

“Jacob took on a leadership role this year being one of the seniors,” Rieger said. “He did a great job at practice discussing workouts, leading cool-downs and stretching. Jacob is a great student and will be missed at PVHS.”

Trojans track coach Fred Schmidt looked at Cipollini as someone who could be relied on day in and day out.

“Jacob is one of those athletes that is consistent, so we know what we can expect,” Schmidt said. “He is a respectful and polite young man. He is respected by his teammates. This season he ran against very strong competition, and I am glad to see his efforts get recognized.”

Cipollini said he benefited from the different styles and expertise of his coaches.

“For cross county, coach Kolodzieczyk is more of a quiet guy, tells us what to do, and we get it done,” Cipollini said. “He gives us the plan, and we execute it. Coach (Erik) Odegard from cross country is the same way.

“Then, coming into track, coach Rieger is pretty hands-on. He’ll always be right there on the side of the track, giving you tips, telling you who to go with, who to let go, when we should pass them. It’s pretty easy to adapt to both.”

Cipollini was quick to say what the best part of participating in sports was at Pahrump Valley High School.

“My friends, mostly,” he said. “It’s awesome to come out and be competitive with them and just have good quality time.”

And what he’ll miss as he goes off to college?

“Probably having closer relationships with people because it’s a lot smaller community,” he said.

Cipollini will be part of a much larger community starting in August, when he heads to Salt Lake City to attend the University of Utah to major in civil engineering.

“I figured I’d capitalize on what I’m best at,” he said. “I’ve heard it’s challenging, but I know people who are engineers, and they have plenty of good things to say about it.”

“It’s close enough to be able to drive to, to visit home for a weekend, but it’s also far enough away where I can do my own thing, and on top of that it’s a pretty prestigious school for engineering,” he said.

Cipollini is the 13th Pahrump Valley athlete to be named to the top 10 student-athlete list. The first was in 2003 when Matt Stevens, who played baseball and soccer, was picked, and the most recent before this year were golfer Craig Moore and Cipollini’s teammate in cross country and track, Bryce Odegard, in 2018.