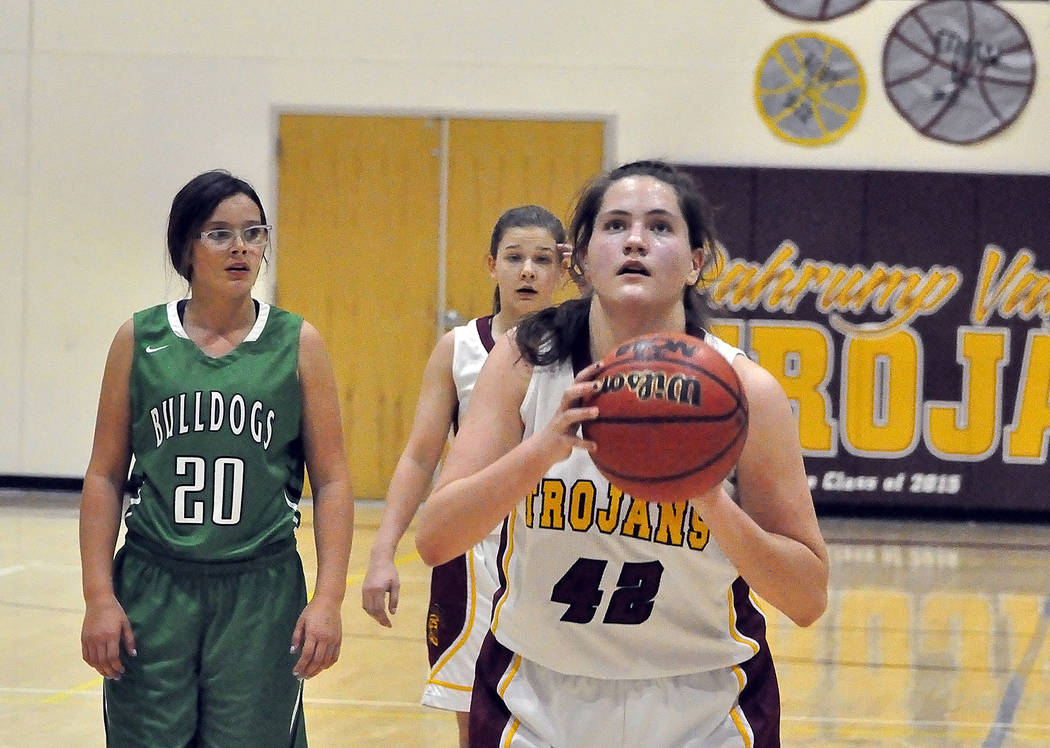 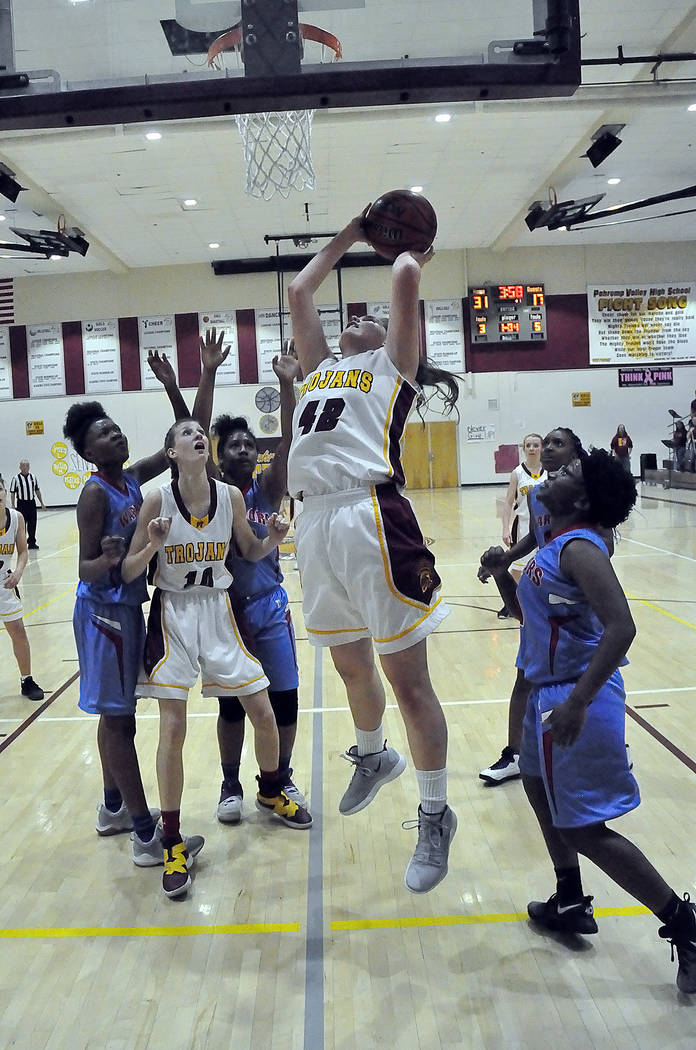 Horace Langford Jr./Pahrump Valley Times Sophomore Kate Daffer goes up for a 2 of her game-high 22 points during a 35-21 win over Western on Feb. 11. Daffer, Pahrump Valley's leading scorer and rebounder, was named first-team all-region and second-team all-state among Class 3A players. 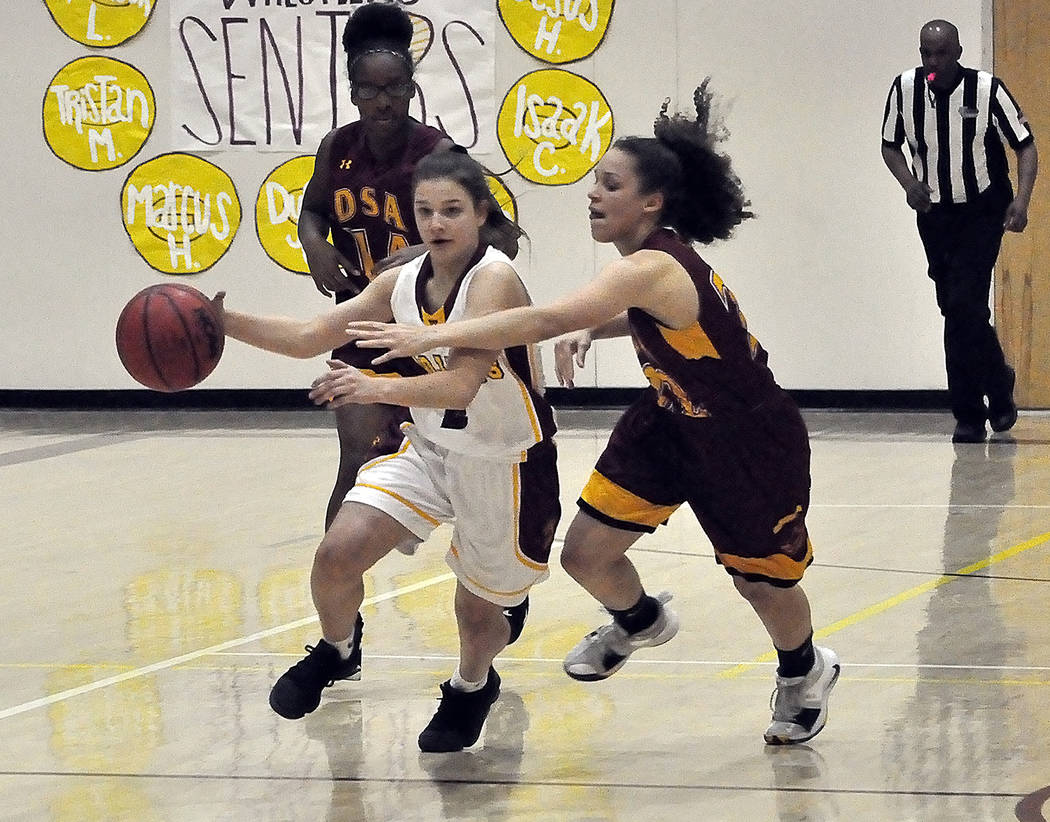 Sophomore forward Kate Daffer was named to the Class 3A All-State Second Team by a vote of 3A coaches, while freshman guard Tayla Wombaker earned second-team all-Southern Region honors.

Daffer led the team in scoring (8.1 points per game) and rebounding (6.6) as the Trojans went 20-14 and won their second consecutive Sunset League title with a 9-1 record. She pulled down a team-best 10 of Pahrump Valley’s 26 rebounds in the league-clinching 43-37 win over Mojave in the last game of the regular season and scored a team-high 12 points in a 47-26 win over Virgin Valley in the first round of the Class 3A Southern Region Tournament.

Daffer was also the best shooter among the regulars, hitting on 41 percent of her shots from the floor.

Wombaker moved into the starting lineup during the season and proved to be an adept ball-handler. She was second to Daffer in scoring with 5.8 points per game while averaging almost 3 rebounds and 2.4 steals for a defense that held opponents to 32.6 points per game.

Wombaker poured in a season-high 22 points in that victory over Mojave. She also made the most 3-pointers for the Trojans this season, hitting 16 of them, and a team-best 77 steals.

The honors did not stop there, as Hopkins was named the Sunset League coach of the year. Daffer and Wombaker were first team all-league, while sophomore guardMakayla Gent and senior guard Jackie Stobbe were each named to the second team.

Gent’s numbers might appear pedestrian at 3.1 points, 1.2 assists, 2.5 rebounds and 1.4 steals per game, but on offense, she often had the ball in her hands and she was outstanding on the defensive end of the floor. But she could score when the Trojans needed her, netting a season-high 11 points against Lincoln County and getting 10 in the playoff win over Virgin Valley. She also was one of only five Trojans to appear in all 34 games.

Stobbe, one of four seniors on the squad, posted averages of 4.3 points, 1.4 assists, 3.2 rebounds and 1.7 steals per game but, like Gent, received notice for her defense. She also had a season-high of 11 points in a game, which she accomplished against Lincoln County, Valley and Del Sol, the latter two were in back-to-back victories.

Although the Pahrump Valley boys struggled to a 6-19 record, 1-9 in the Sunset League, Class 3A coaches recognized senior Brayden Severt’s performance and named him second-team all-Sunset League.

Severt led the Trojans in scoring at 11.8 points per game and was second on the team in rebounding average with his 6.2. Interestingly, he finished with almost exactly as many offensive rebounds (77) as defensive rebounds (78). The 6-foot-4 Severt scored in double figures 15 times, including 24 points in a loss to Del Sol and 22 in the Trojans’ 54-50 win over Western on Senior Night in Pahrump.

A 69-percent free throw shooter, he easily led the team in both free throws made (87) and attempted (127). He was also the busiest Trojan, racking up 764 minutes played, an average of more than 30 per game.