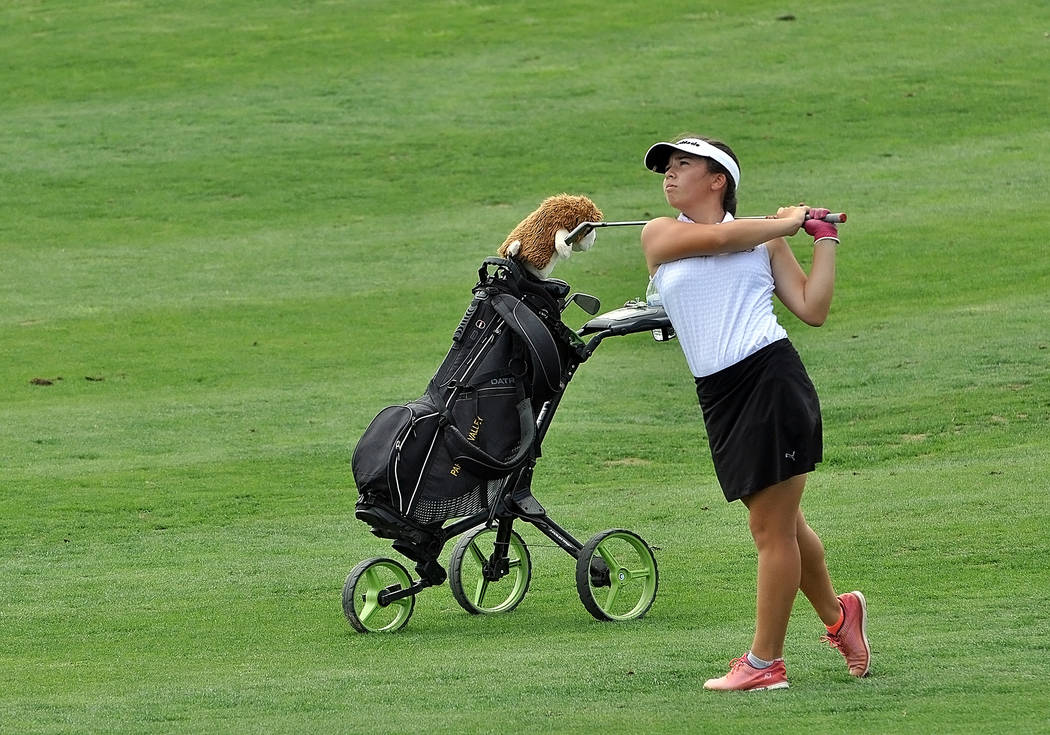 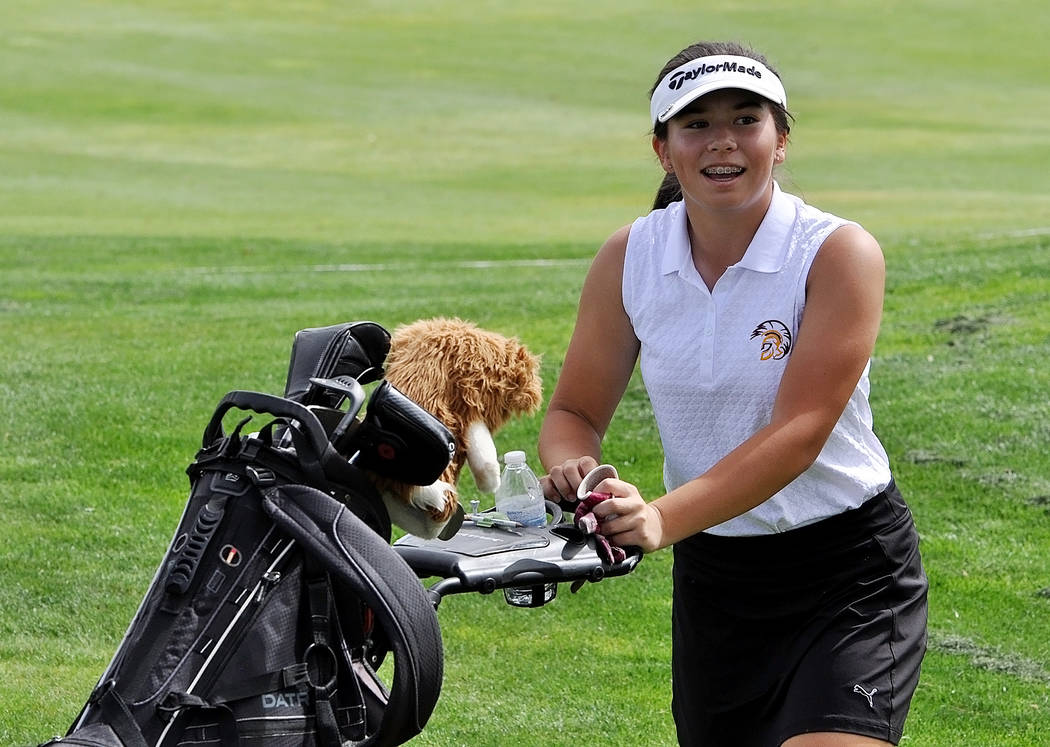 Horace Langford Jr./Pahrump Valley Times Golfer Breanne Nygaard flashes a quick smile at the camera and then she is all business, hitting four birdies on the first four holes. 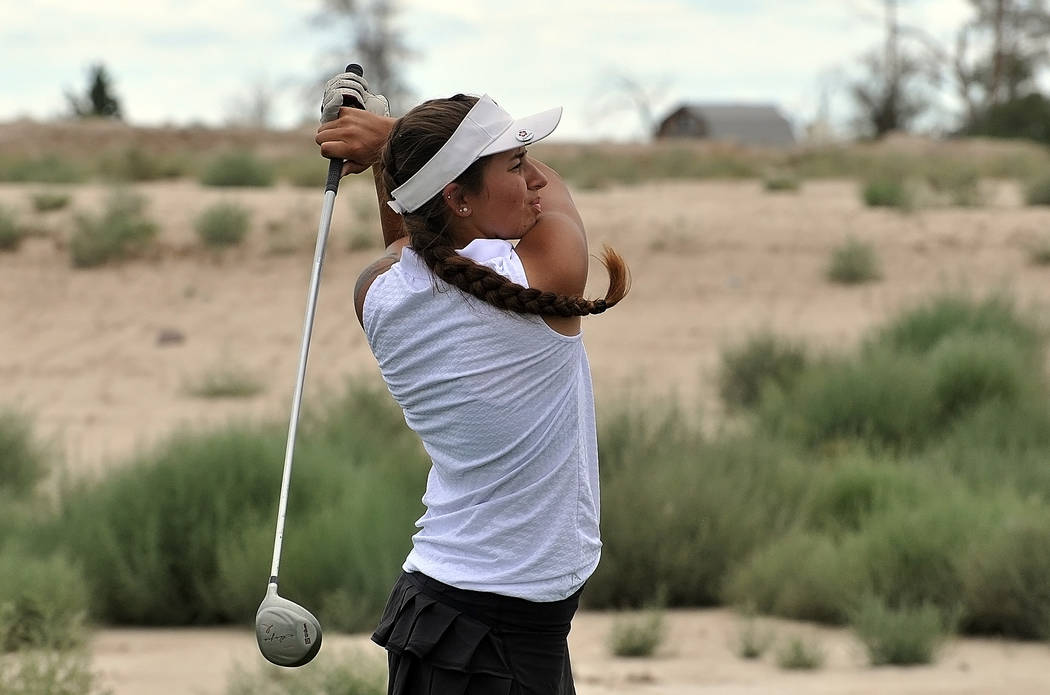 Jessica Pearson has only been playing golf for barely two years. She is highly competitive and likes her new sport. Pearson finished fifth overall in match play. 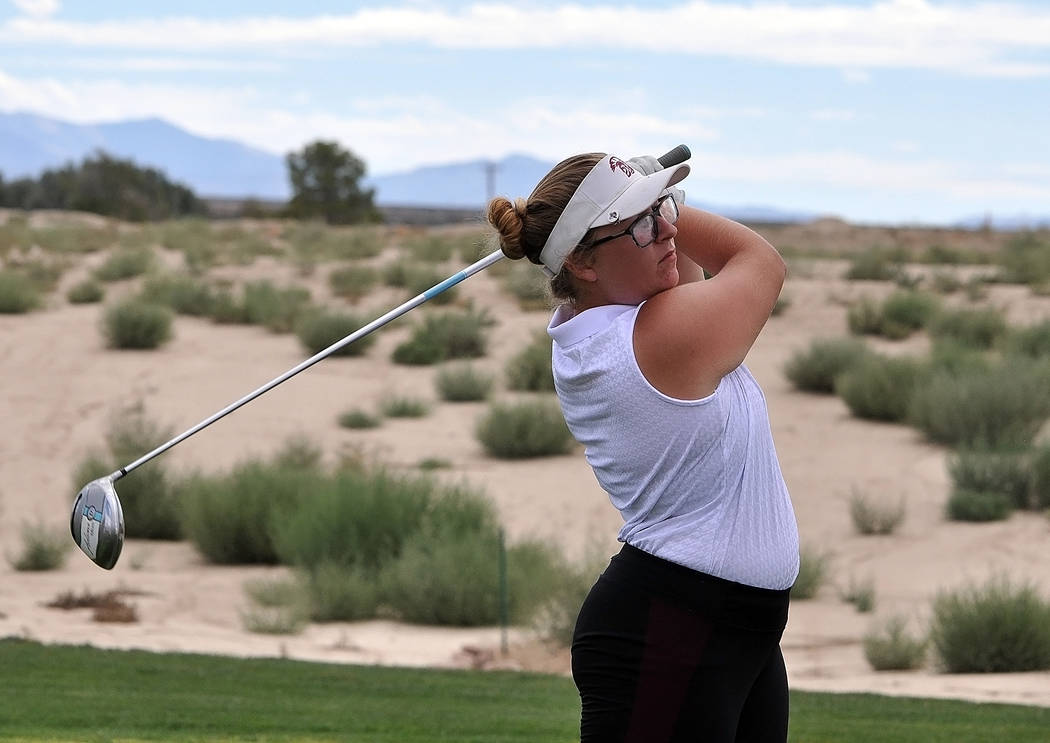 Pahrump Valley golfer Breanne Nygaard knew she had a good game going after she birdied the first three holes at Mountain Falls Golf Course, but you wouldn’t know it from her attitude.

She was cool, calm and showed little emotion as she went through the first three holes, hitting each ball smoothly and with little effort.

After she birdied the third hole, she took a breath to say a few words.

“I think the most I have birdied is four holes, but I am not sure,” said Nygaard, a freshman. Then it was on to the next hole.

She drove the ball on the next hole, laying the ball up just before the green. This hole is a short 108-yard par four, but it is intimidating because one has to hit over water. Nygaard’s drive was straight and true. She then hit a chip shot that landed just inches from the hole. It just required a tap and she had her fourth birdie in a row.

It was off to hole five. There was no celebration. To her, it was just another day at the golf course.

“That’s the way she has been,” her father and assistant golf coach for the Trojans said. “She will birdie three holes on the front nine and then fold under pressure on the back nine. Golfing with old dad is fine but she needs to work on being under pressure. Oh, she can now beat me in golf.”

Secretly she must have heard old dad talking for she finished the day 6-over-par 78 to help Pahrump beat all the Sunset League golfers there.

“I think a golfer that can shoot four birdies in the first five holes can handle the pressure,” Trojans head golf coach Bob Hopkins said. “Once she goes low she shouldn’t have problems doing it again.”

The girls team finished with a 389 to take first place on Wednesday afternoon. No other team had an official score.

“I am satisfied how the girls did,” the coach said. “Breanne (Nygaard) had a good round of golf. I am worried about the other girls. Petrie needs to shoot in the high 80s and low 90s. And the rest of the girls need to be under 100.”

On Sept. 19 the girls are at a Sunset League match against Southern Nevada Golf Course Superintendents Association in Las Vegas.

Then Nygaard and the rest of the team will take on Bishop Gorman’s Hunter Pate on their home course at Bear’s Best Golf Course at 1 p.m. on Sept. 20.