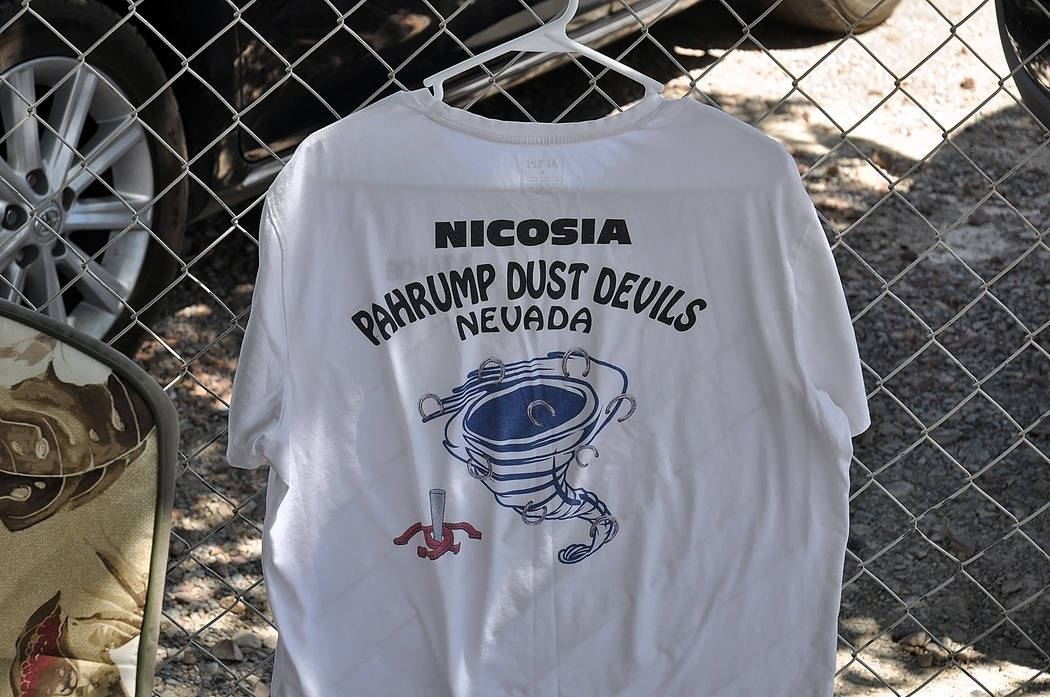 Horace Langford Jr./Pahrump Valley Times The logo of the Pahrump Dust Devils is seen on the back of Mike Nicosia's shirt hanging on a fence Wednesday at Petrack Park. 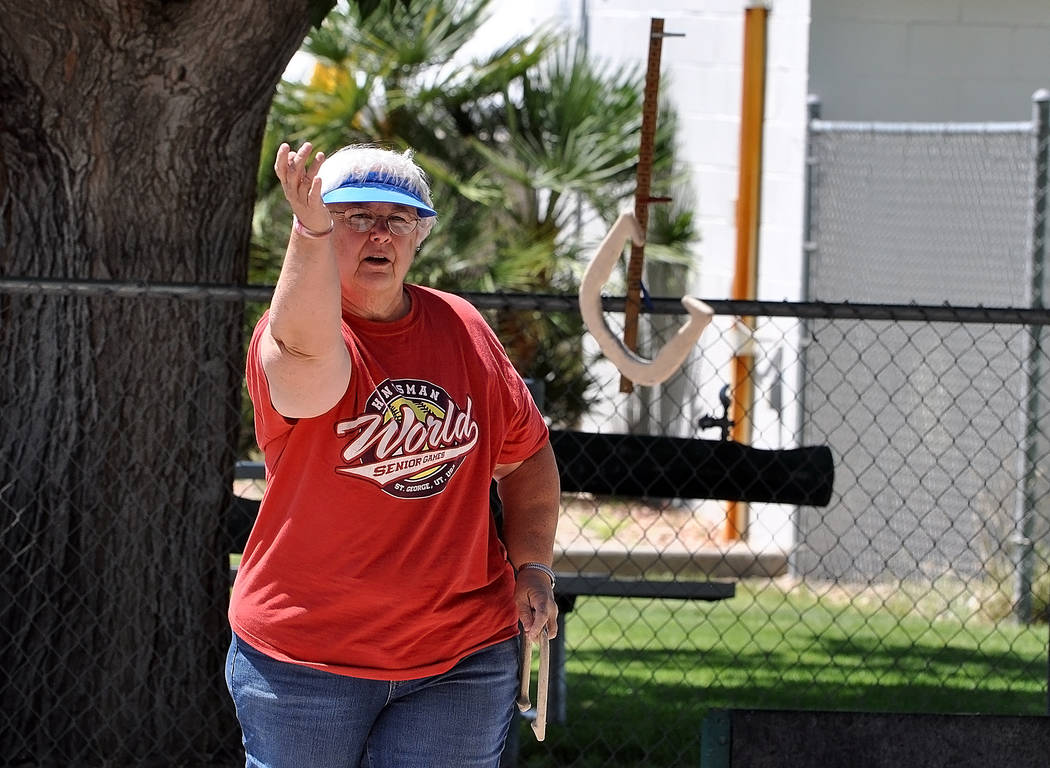 Horace Langford Jr./Pahrump Valley Times Kim Bradshaw of Pahrump will be taking her horseshoes to St. George, Utah for the annual Huntsman World Senior Games, her first time going for horseshoes after a decade of going for softball. 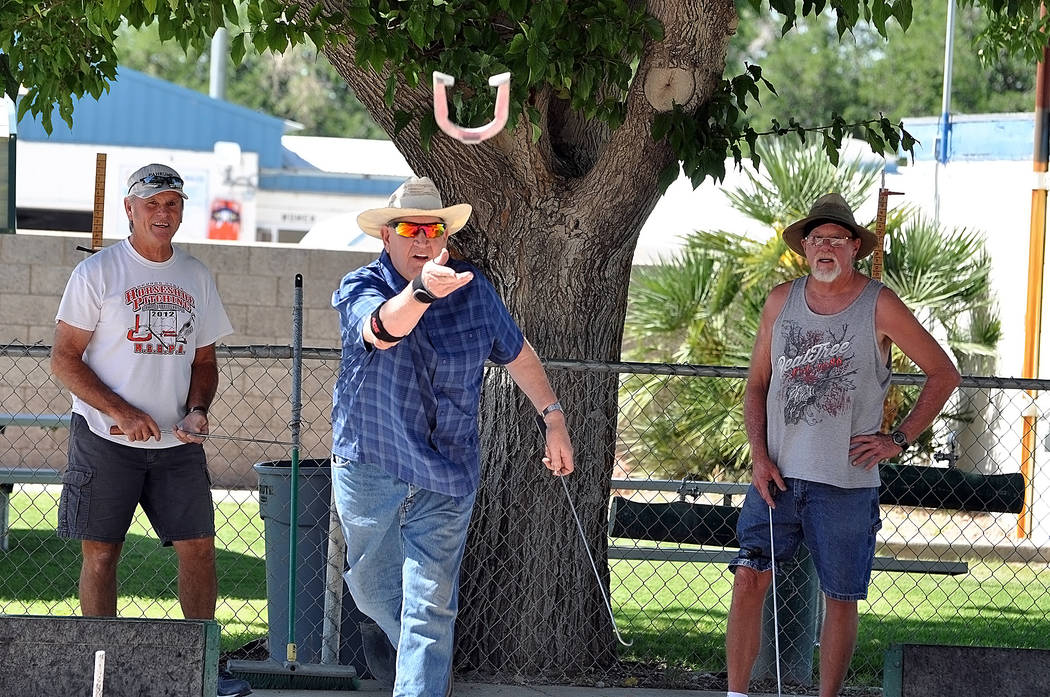 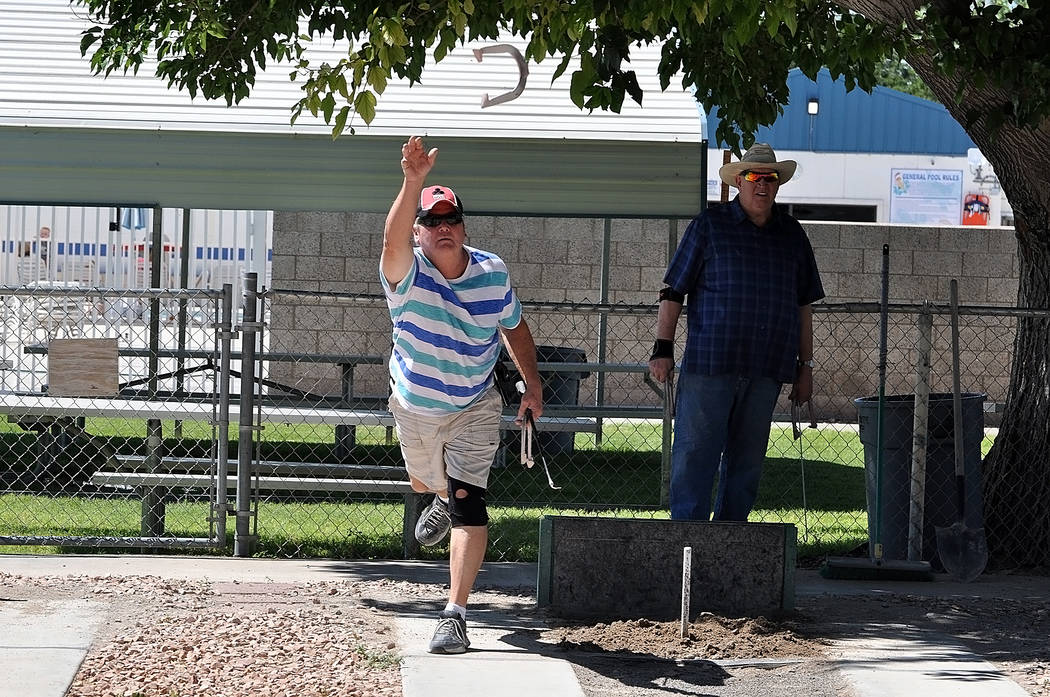 It wasn’t long ago that Mark Kaczmarek had the same notion about horseshoes that most noncompetitive pitchers have.

“When I first came out here, it was interesting,” he said. “I had never thrown horseshoes. You throw them at a picnic, when you’re having a barbecue, and you don’t know what you’re doing. You’re just trying to hit the stake. Here, you start throwing, you start getting better, you get excited just like any other sport. The better you get, the more excited you get.”

In his first year of competitive horseshoes, Kaczmarek has done quite well for himself. Most recently, he won five of six games, throwing 66 ringers along the way to win the High Desert Showdown in Tonopah. He has won four tournaments sanctioned by the National Horseshoe Pitchers Association to go along with wins in three nonsanctioned events.

“It’s pretty good for only playing for a year,” Kaczmarek said.

Other Pahrump residents have been pitching horseshoes for much longer. Don Brown, the president of the Nevada State Horseshoe Pitchers Association, an affiliate of the national group, remembers there being pits in town back in the 1970s. The current pits at Petrack Park were put in 14 years ago by Pahrump’s Buildings and Grounds Department manager Matt Luis.

Luis gets rave reviews from the Pahrump Dust Devils, as the horseshoes team is known.

“Any time I ask him to do something he’s right there,” said Mike Norton, the state organization’s secretary-treasurer and the person responsible for keeping results up to date on its website. “One of the sprinklers was coming over and drowning out the pits. I told him about it, and an hour later somebody was out there taking care of it.

“You talk about support, anything we need, we ask him and it’s done,” Brown added. “He’s happy we’re using them.”

But ask just about any of the Dust Devils, and they will tell you the best thing about Pahrump’s pits is shade. Most of the pits are shaded by trees, making horseshoe pitching far more comfortable during summers in the desert.

“You go up to Hawthorne for the state tournament, and they’ve got no shade,” said Mike Nicosia, who has been pitching competitively since 2010 and got his wife Stacie to join in this year. “We’ve got to bring our EZ-Ups. We’ve got more shade than anybody.”

“They’re beautiful,” Brown said of the trees. “I’m telling you right now, our pits, in the state of Nevada, have the best natural shade of any of them. Vegas put in overhead shades last year or two years ago. It’s nice, but it’s see-through canvas-like stuff and not the natural shade we have. Tonopah’s nice, but the trees are not close. Actually, Beatty has a very nice setup, but nobody uses it.

“If we had more pits down here, guaranteed we’d have state down here. It’s a little hard to do with six pits. … If they gave us a new park with more pits, we’d probably lose this natural shade. It might be 100 out there, but it’s only 90 under here.”

With the breeze, the Petrack Park horseshoe pits are just about the most comfortable place you can be outdoors in Nye County. Undoubtedly, that’s part of what keeps people coming out twice a week.

“When I first got here, hardly anybody was using them,” Norton said. “Then we had one of those Fall Festival tournaments, probably about 10 years ago, and a guy put $1,000 into the prize money. We had 30 players out here.

“The Fall Festival is usually our biggest one of the year. That’s really fun, and the Chamber (of Commerce) puts in extra money. Last year we had 11 teams. That’s 22 people. We were out here most of the day.”

Brown also remembers fall as a key time for generating enthusiasm for horseshoes in Pahrump.

“We had a harvest festival one time where everybody got together, and we were like, ‘Hey, we’ve got some other people out here who like to play horseshoes,’ ” Brown recalled. “We started meeting regularly, and for a long time it was just four who would show up, and maybe five. Then gradually we’ve been adding people … and now we’re getting up to 10, 12, 13 people out here. It’s pretty nice.”

Brown said newspaper stories, online advertising, web surfers coming upon the organization’s site and plain old word of mouth help bring newcomers into the fold. It was the last one that brought in Kaczmarek.

“I used to ride motorcycles when I first retired here,” Kaczmarek said. “Through that I met people, and I met people playing golf, and those golfers knew people who threw horseshoes. They invited me to come out, and I’ve been here ever since.”

Kaczmarek, a Buffalo, New York native who spent most of his adult life in California, definitely associates mornings pitching horseshoes with the small-town life he sought in retirement.

“It’s a great small town,” he said of Pahrump. “I love it here. I grew up in the city in New York, and when I came to California I lived in a city there. As we got older, we were getting kind of tired of the city life. It was time to move to something a little smaller, and this is great.”

Nicosia came to Pahrump earlier, moving into town in 2000 after living in Las Vegas since 1973.

“As soon as I retired I wanted to join NHPA and play sanctioned tournaments,” Nicosia said. “When you’re working you don’t have enough time to do too many things. Since I retired, that was one of my goals, to join and go all over the state playing tournaments. And it’s really hard in this state because we are so spread out.”

Brown joked that he’s busier now than he was while working.

“I play golf three times a week, throw horseshoes twice a week, and I bowl once a week,” said Brown, who said he has been a sanctioned player for about 10 years. “When I worked I got three days off. Now I’m retired, and I have two days off.”

But horseshoe pitching is not just a bunch of old guys drinking beer in between trying to toss 2.5 pounds of metal around a stake 37 feet away. Women do it, too. Norton pointed to Kim Bradshaw as one of the better pitchers in town.

A longtime softball player, Bradshaw is in her second year pitching competitively. In between her two years with the Dust Devils, she took time off to get her knee done, and she says she’s pitching better with her new knee. In fact, she will be taking her horseshoes to the Huntsman World Senior Games in St. George, Utah and next year’s National Senior Games in Albuquerque, New Mexico.

“I’ve done 11 years in the Huntsman Games,” Bradshaw said. “I’m going to do horseshoes this year because I don’t have a (softball) team that’s going to Huntsman. So I’m doing horseshoes for the first time. If you do 15 years, you get a ring. I’m going to make 15 in some sport if I have to walk. And I can!

None of that means Bradshaw is ready to give up softball.

“My last position was third, but I love to play second because I love to turn double plays,” she said. “Seniors practice out here twice a week, so I’m keeping up my skills even though I don’t have a team.”

The Dust Devils are always eager to get more people interested in pitching horseshoes competitively. Anyone is welcome to come to the Petrack Park horseshoe pits from 10 a.m.-noon Wednesdays and Saturdays. For information, contact Norton at 775-537-0542.