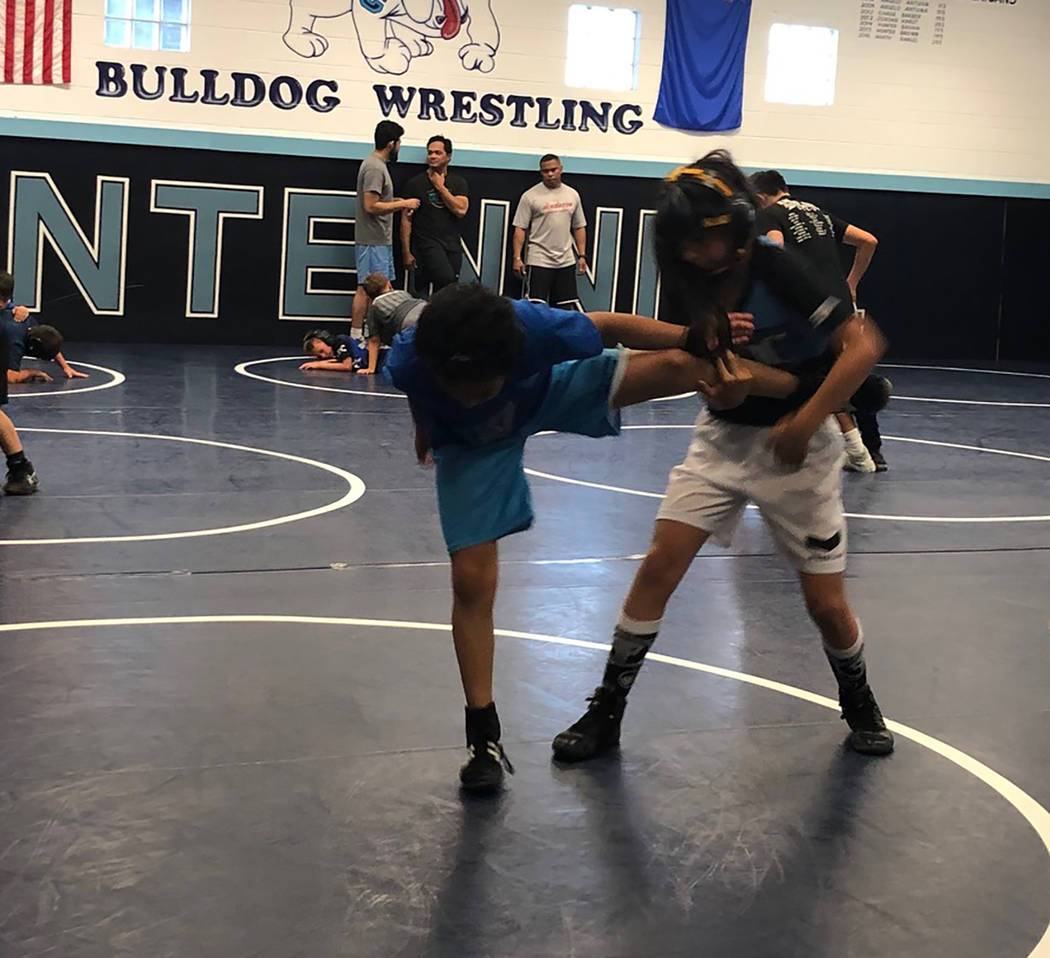 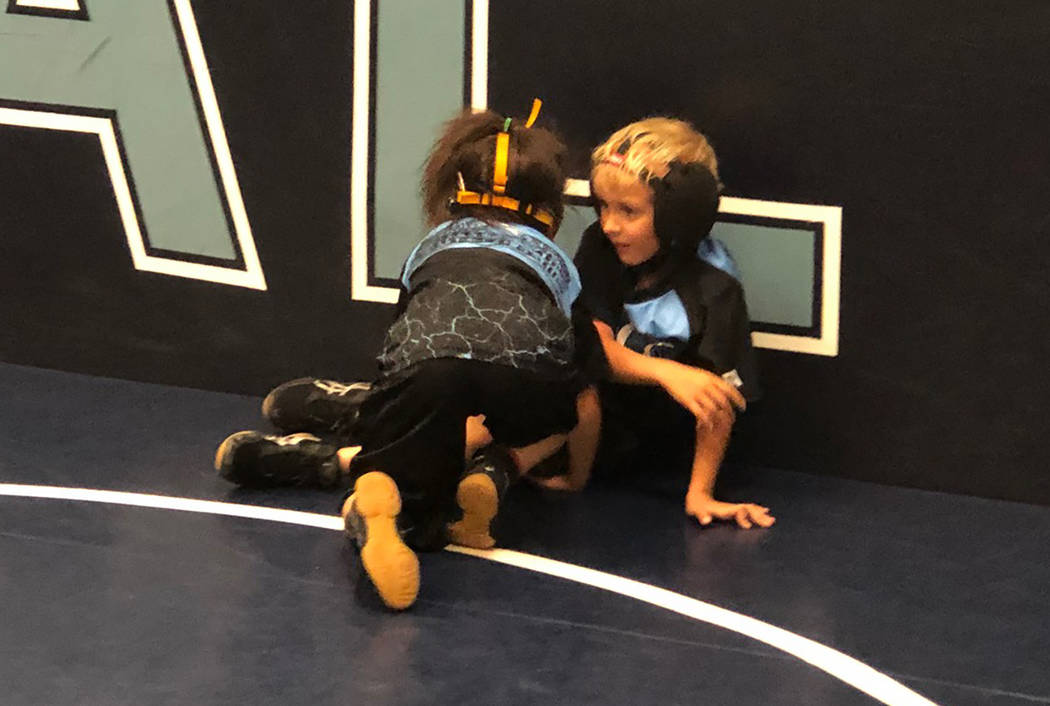 One anecdote neatly sums up both the attitude young female wrestlers face and a great way to combat it.

“Sometimes I hear coaches,” 10-year-old Pahrump resident Mika Yoffee said. “One time I heard this coach, and I lost to the boy, and his coach said, ‘This is why girls shouldn’t wrestle.’ It made me really upset. And the next time I wrestled him, I just pinned him.”

“I remember this time we were at the SLAM Tournament, and I was going to wrestle this kid,” Suri recalled. “He was going soft on me, so I did a hammer throw on him.”

Another lesson learned. Don’t mess with Suri, either.

Mika and Suri were speaking outside Centennial High School in Las Vegas, where each wrestles with the House of Centennial wrestling club. The club is for wrestlers ages 5-15.

“This is the first year for girls,” said Jay Alejandro, a club coach who recruited the Yoffee sisters to wrestle there. “Prior to that, they had been wrestling with the boys. Our big objective when we talk wrestling at Centennial High School is for these girls to come in and we can say, ‘You don’t have to wrestle boys, you can wrestle girls, too.’

Marianne Yoffee is an enthusiastic supporter of her daughters’ desire to wrestle. In fact, she quit her job to make sure she would be able to get them to practices.

“I used to work as a clerk in Nye County, but when they got the opportunity to wrestle for House of Centennial, my husband and I had to decide if I should continue working or dedicate this for the kids,” she said. “My kids really want to wrestle … I want to do what they want to do, and they feel like this is something they want to dedicate themselves to.”

Dedicate is the right word. Despite their young age, both girls are extremely serious about wrestling, with Mika already talking about wrestling in high school. Their level of commitment is what led Marianne to agree to shuttle the girls to House of Centennial.

“There’s more opportunities,” she said. “They’re part of Team Nevada Girls. It’s House of Centennial, but they are trying to foster this program for Team Nevada Girls so they can groom the girls for when they do go to those other competitions, they’ll be ready for that.

All that work leads to things such as USA Wrestling’s women’s freestyle national championships earlier this month in Irving, Texas. Both sisters had good showings, with Mika finishing fourth in the 75-pound weight class in the 12U division and Suri placing third at 45 pounds in the 9U division.

Those divisions mean that in addition to wrestling boys, the sisters often are wrestling older, more experienced opponents. Yet they continue to bring home medals, and the Texas event also allowed them to meet Olympic wrestlers, including Leigh Jayne, Adeline Gray, Clarissa Chun and Suri’s favorite, Emma Randall.

In a sport without many female role models, that is pretty serious stuff. But while both sisters say they were inspired by male wrestlers — their 12-year-old brother, Kenzo, for one — they intend to help blaze a trail rather than follow in anyone’s footsteps.

But they do have female wrestlers to follow much closer to home than any Olympiad. Alejandro’s daughters, Jenavi and Juliana, have accomplished a great deal already.

“I was coaching my son through the same program, and I had two little girls,” Alejandro recalls. “And I said, just go work out. You don’t have to compete. We did that for about two years. Then ‘Daddy, I want to do cheerleading, I want to golf.’ Two years of that, and they came back and it was, ‘I want to go into wrestling.’

“My daughter, Jenavi, is a freshman at Centennial, made the varsity team, first girls champion, all-American. My daughter Juliana just made the world team. It’s a great thing for girls in Nevada because they’re paving the way for younger girls like Mika and Suri who are on the same path.”

“They admire them,” Marianne Yoffee said. “We see them, and they’ll be like, ‘We’ve got to watch the Alejandros.’”

Mika has been wrestling for just two years, starting in 2017 with the Pahrump Junior Trojans, while Suri joined her on the mat last year. Mika jokes about thinking wrestling was much like what she watched on television with Kenzo.

“I thought it was fake wrestling like WWE because I used to watch that with my brother,” she said, giggling at the memory. “But I got inspired by one of our friends, Cory O’Neal. He was really good at it.”

Even at 7 years old, Suri has a favorite move.

A few years older, Mika has a few more moves she like to employ on the mat.

“I really like leglaces, sweep single-legs, fly-bys and duck-unders,” she said. “A duck-under, basically you’re in a tie-up, and while there’s pressure pushing into you, you change levels, push your arm over your head and get around.”

Being able to execute a variety of moves at that age is impressive, but being able to explain them to a wrestling know-nothing is even more impressive. But Marianne isn’t surprised by anything her daughters do.

The discipline of wrestling carries over into the classroom, as both girls — Mika finishing fifth grade, Suri completing first grade — are straight-A students at Manse Elementary School. That discipline and desire to work hard is what Alejandro noticed in them.

“I see greatness,” he said. “Their attitude’s awesome, they’re hard workers, the family’s backing them up. These girls are doing really great things.”

While they are starting to make things happen on the women’s wrestling scene, back home there are still boys with whom to contend, and it’s still not always smooth sailing.

“Last year, there was this boy, and his dad grew up with my dad,” Mika recalled. “My first win I pinned him in a cow catcher, but I wrestled him just so much and beat him every time I wrestled him. He never came back. Or maybe he changed weight brackets or something. I haven’t seen him at any tournaments.”

And at least once, a male opponent freaked her out and, in the process, left her with lasting evidence of the bout.

“There’s this one time I got scraped across the face,” Mika said. “He got like really weird and at the end he backed up and just ran at me and went right across my face. So I had this scrape across my face for a really long time.”

It’s hard to say if that happened because she was a girl or if the other kid was just strange, but the odds are good it was the former.

“I think they’re still kind of upset that a girl is winning,” Mika said. “I had to earn my way in.”

But it’s not just matches against boys that leave her licking her wounds.

“One time I was wrestling one of my teammates in a tournament, and she’s really tough,” she continued. “She did this weird kind of throw and I hit my knee on the mat, and when I got off the mat I looked at my knee and there was something wrong.”

Neither sister has seen enough girls on the mats, although the sport is growing. According to the National Wrestling Coaches Association, between 1994 and 2018 the number of girls wrestling in high school grew from 804 to 16,562, and 13 states offer a girls state championship.

Those numbers indicate a solid future for the sport, but for Mika and Suri Yoffee, they’re just enjoying the ride.

“I get to spend a lot of time with my family, and we get to go on trips together,” Suri said.

And Alejandro can’t wait to see what the girls do next.

“The most important thing is that they have the desire to work hard and want to win,” he said. “You can’t teach that.”