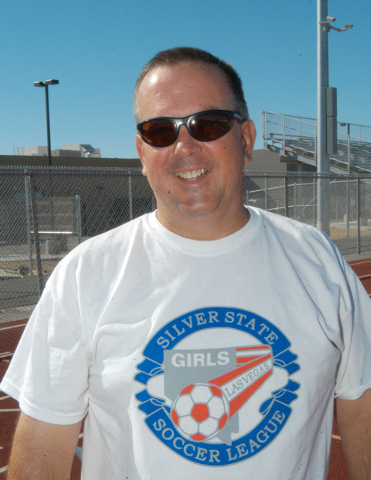 Joe Sladek will be starting a new club soccer team starting around the April time frame. Sladek was the assistant coach for the Trojans from 2010-2013.

Sladek’s soccer resume is as vast as his knowledge.

He definitely has the “street credentials to coach.” He has over 10 years of experience and in 2013 was the first coach from Las Vegas to take a U-18 Players Club team to the nationals from the state of Nevada. He was also the first team in a long time to take the Southwest regionals in the same division that year. There were only three other teams to do it but they were younger ages. In addition to those club soccer accolades, he deserves credit for helping with the 2011 and 2012 state championship teams.

“You know it always helps to have a Sydney Sladek (his daughter) on the team,” he said chuckling. “I also have learned from the best. I have been to every tournament level for girls and have seen a high level of play over the last decade and this has taught me a lot.”

The practices will be at the high school and the age group will be from 7-12. The program will be free of charge, but he said there will be a lot of fundraising and the need for parent participation. He is also looking to train some new coaches.

“If we get enough coaches, I can see us having 30-40 kids involved with the program,” he said. “I have talked to Players and they are letting us do this without having to pay dues since they will be trained over here. Also because I coached over there (Las Vegas) and never asked for a salary.”

The program will start off with girls and add boys down the road.

The team will be run through the Players Club organization. Sladek has been with Players for the past three years. Signups will be open starting in March.

“I would like to create a soccer dynasty out here, so it won’t just be one group but it will continue on from year to year. I want to start with the younger because they are the easiest to train the way they need to be trained,” he said.

These girls will be training 9-10 months out of the year and then as they get older they will play more.

He says the benefits of doing this program is the girls will get better competition and training. All the training will be done out here, but the tournaments will be in Las Vegas, Arizona and California.

It may be free of cost to play and join but the team will still need to pay for entrance fees to tournaments.

He said he will be doing eight tournaments and of those, four of them will be in the Las Vegas area.

Other benefits of the team will be the kids will learn from a coach who has experience getting kids college scholarships. Sladek is the father of the Sydney Sladek who scored 78 goals in 2013 in her last year with the Trojans and broke all kinds of records. Sydney is now attending USC as a freshmen and is already starting for the Trojans in the Pacific 12 conference. She is one of many kids who have gone to college on a soccer scholarship under his guidance.

Joe wants this particular age group to benefit from training that they can’t get from AYSO.

“Don’t get me wrong,” he said. “AYSO is a great organization. The coaching at the U-12 to U-14 just have less teams and so much turnover so the knowledge base and the coaching skills don’t get developed.”

He says he has developed over the years the patience to coach teens.

“The reward is great. You have to have a passion for it. My reward is to watch the kids grow and make it to college,” Joe said.

In addition to the kids, Joe is willing to also train soccer coaches what he knows.

“I want to get some coaches underneath me,” Joe said. “I have learned a lot from guys who were willing to teach me. I am more than happy to do the same. I love to win and love for the girls to do well, but I really don’t want to take credit for anything.”