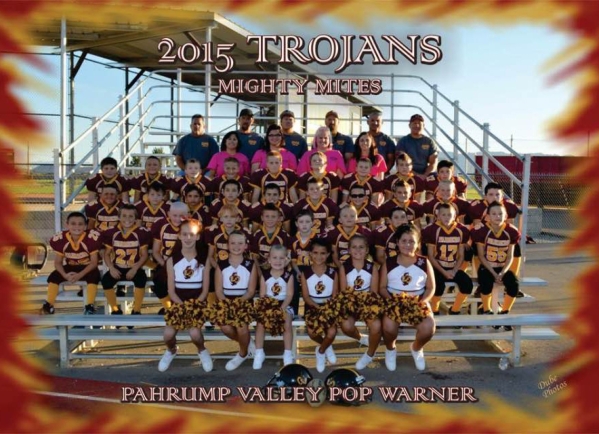 The 2015 Pop Warner Mitey Mite Trojans are made up of 7, 8 and 9 year olds. This season the team reached the second round of the Southern Nevada Pop Warner Playoffs, led by first year coach Dean Capron.

The fourth seeded Trojans defeated the fifth seeded Lil Rebels 7-6 in the first round on Nov. 7.

The Trojans then moved on to the semifinal game played Nov.14 against the number one seed, an undefeated Las Vegas team, the Apaches.

The opposing team played the first half with all their starters, scoring four TDs as Pahrump used a different strategy, playing most of their substitutes in the first two quarters.

The second half was a different story. The Apaches had to play their subs as mandated by the League. Pahrump was able to score on the first play of the third quarter as QB Chase Otteson completed a 10-yard pass to River Cable.

The Trojan defense played tough football, and stopped the high-powered Apache offense. With impressive play from corners River Cable and Brennan Benedict, the Apaches were forced to run up the middle where they were met with hard hits from linebackers Cameron Briscoe, Kayne Horibe and Chase Otteson. Unsung heros Austin Sandoval, Cory O’Neal, Blake Wescoatt, and Blyson Marquez dominated the defensive line.

The Trojans ended their season on a high note. Marching down the field and scoring on the last play of the game. Wide receiver Joseph Barton caught the ball, ran for a first down and delivered a devastating hit on a defender to keep the drive alive. Right wing Kayne Horibe scored on an inside reverse as time expired to end the game and close the Mitey Mite 2015 season.

The team had a great season and is already looking forward to next year. There will be football camp in June. There are no tryouts in Pop Warner, so the camp is a great way for the youth of Pahrump to give it a try before the next season gets underway. Check us out on Facebook, Pahrump Valley Mitey Mites. As the camp gets closer, we will have the info up on the Facebook site.