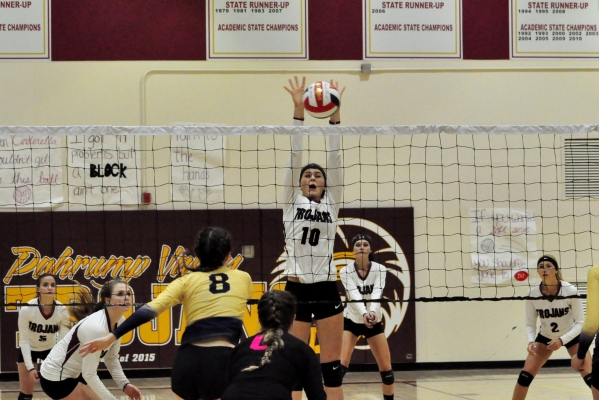 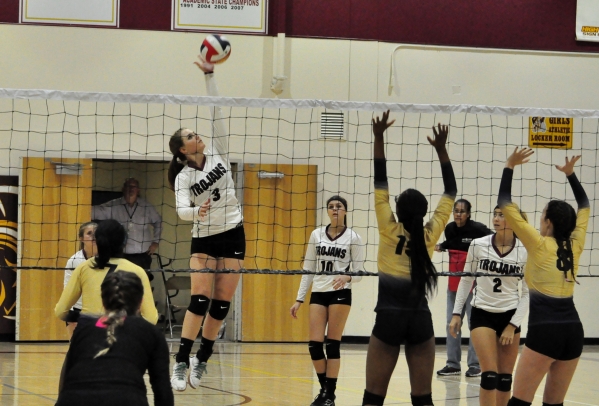 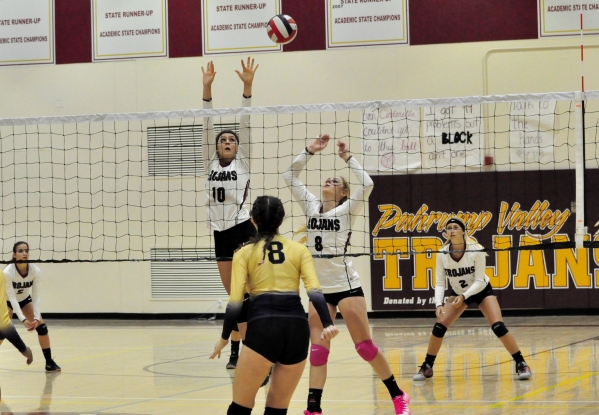 The Trojans spikers dominated Cheyenne in a home volleyball match on Tuesday and swept the Desert Shields in three quick sets, 25-12, 25-16 and 25-13.

The girls are on a two-game winning streak, sweeping their last two games in three sets. This comes at a good time for Trojans coach Jill Harris, who wanted some momentum going into Thursday’s game against division leader, Faith Lutheran (12-9 overall, 6-0 Sunset League), which was past deadline. The team is slowly climbing up the standings after losing to the top four teams and is fighting hard to get the third place playoff spot or the fourth place spot.

The Faith Lutheran game will be the first meeting between the squads in league play and signifies the end of the first half of the season.

Harris wants her girls to just come out and enjoy the competition.

“Our girls need to play and have some fun,” she said. “We have nothing to lose. Faith is ahead of us, so the pressure is on them. We just have to come out and play our game.”

Despite winning the last two games, the Trojans have to prove they can win the big game. Meaning they need to beat one of the top four teams in the second half of the season if they want to play in the postseason. This means beating Faith Lutheran, Sierra Vista, Spring Valley or Mojave.

Earlier in the year, Harris’s squad had Spring Valley on the ropes, leading 2 games to 1 but couldn’t get the win.

“We are not where I want them,” Harris said. “I have seen them play better. I am never satisfied. I will always want to see my girls play better.”

When asked if she thinks if her team could beat Mojave or Spring Valley now, she replied, “I think we can.”

Regardless, the Trojans servers were just too much for Cheyenne. Alexis Trieb had a great night of serving and was responsible for giving the Trojans a huge lead whenever she served. In the last set she gave the girls a seven-point lead that the Desert Shields couldn’t come back from.

“Trieb served well tonight,” Harris said. “It was hard though to really tell how good she really was because Cheyenne was so bad at returning serves, but she served well.”

For Faith Lutheran, Harris wants her team to execute better and clean up some unforced errors in play.

“Against Clark we didn’t do as well as we should have,” Bishop said. “This game we played a lot better, but we still need to work on the serving. We missed a lot of serves in the game before — ones we shouldn’t have missed. I think we need to work on our serves and ball placement.”