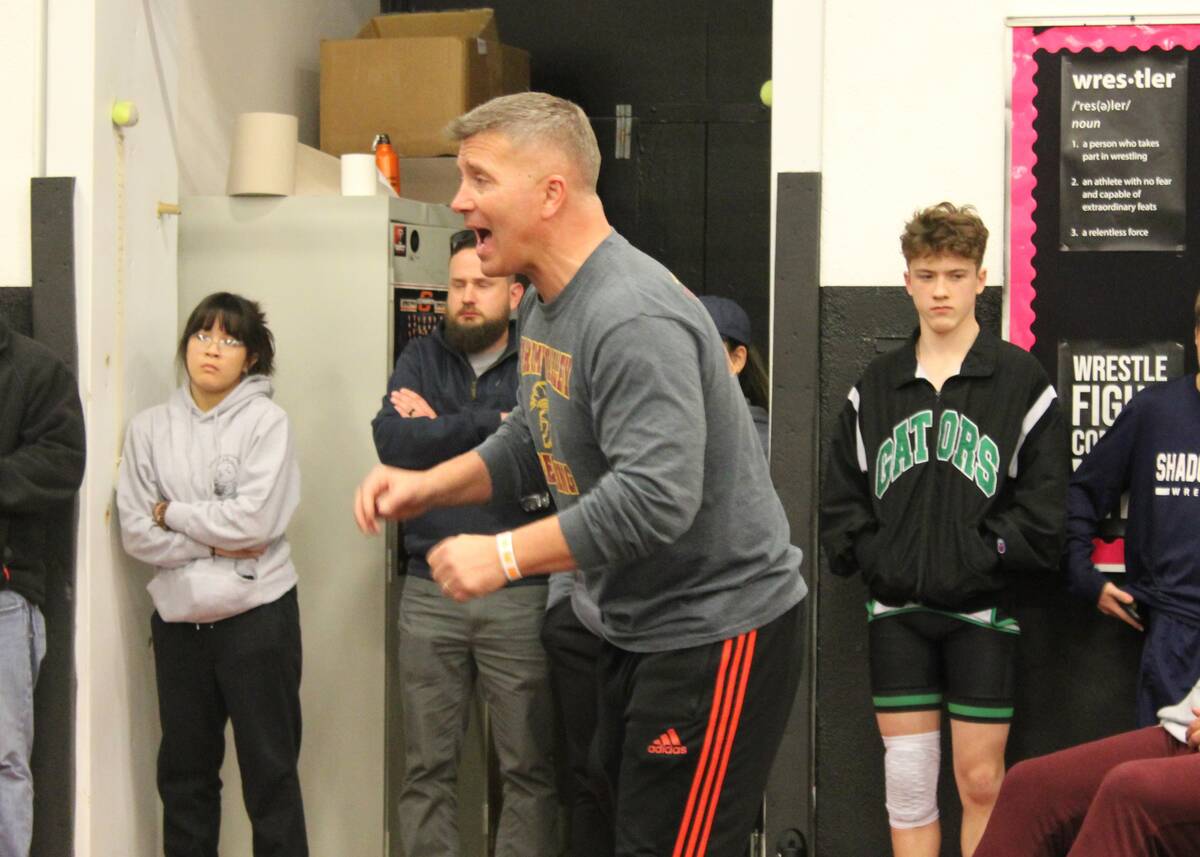 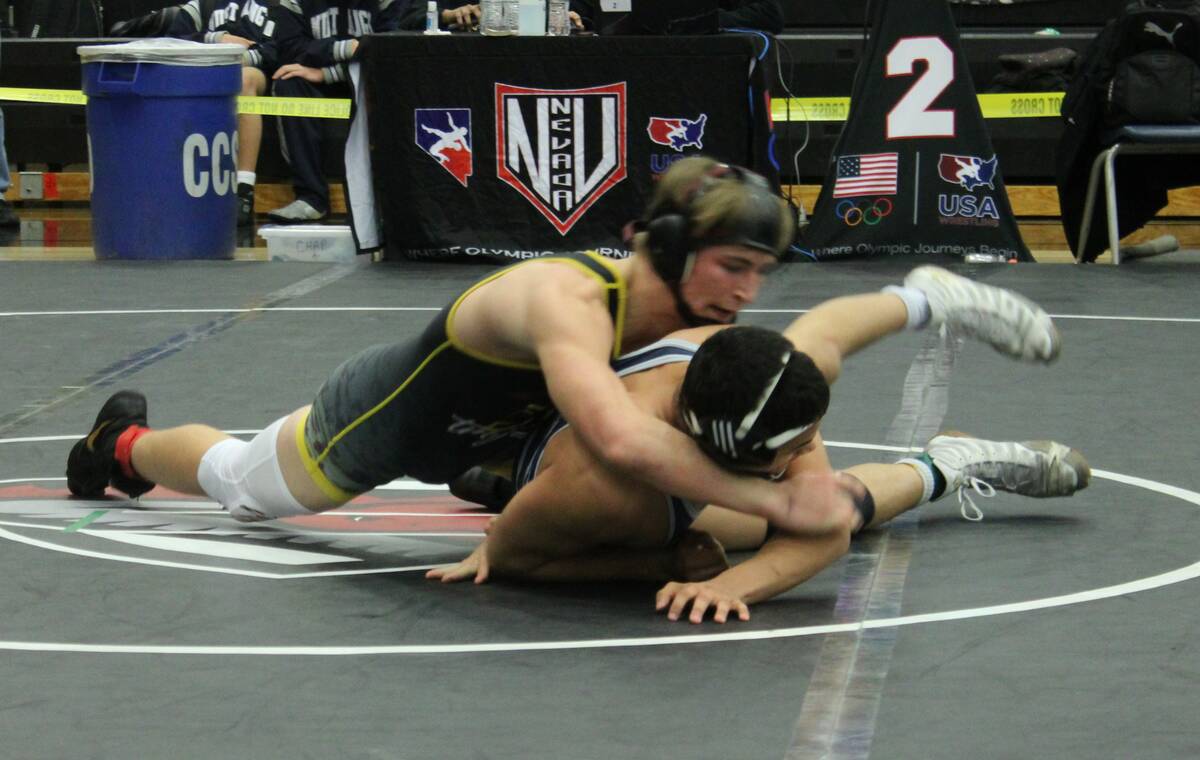 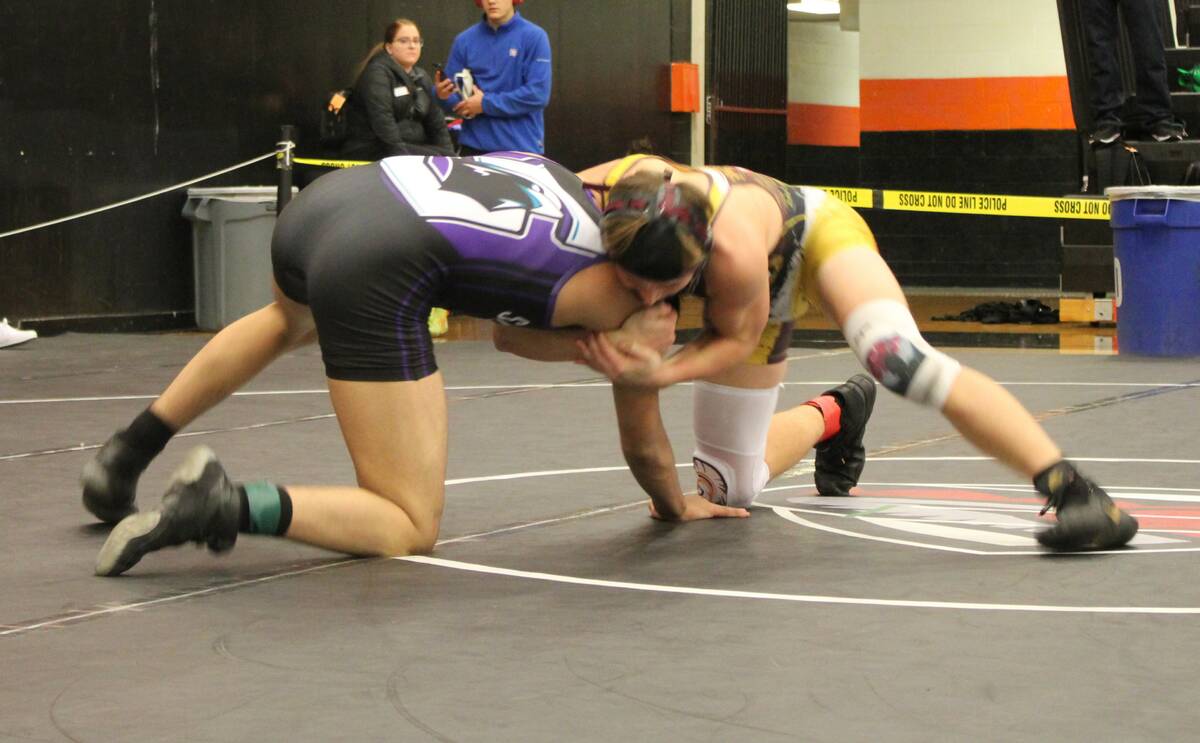 Danny Smyth/Pahrump Valley Times Brennen Benedict holding his opponent, Zyon Trujillo of Silverado, while trying to get positioning in the match. Benedict would go on to finish the tournament in 3rd place of the 150-pound weight class.

Most of the 33 schools participating in the event were from the Las Vegas valley, however, a few schools, including Pahrump, traveled to the valley for the tournament.

The 33 schools combined to have 310 wrestlers competing in the invitational.

SLAM Nevada – the 5A defending state champions – took home the top spot in the team portion of the tournament. They finished with 227.5 points, just beating out Pleasant Grove’s 221 points.

No other team in the tournament scored more than 150 points.

The Trojans had a representative in 13 of the 14 weight classes. The only one they didn’t have a wrestler in was the 144-pound division.

Junior Brennen Benedict was the only Pahrump Valley wrestler to get a top-3 finish in the tournament.

He came into the tournament with a perfect 24-0 record this season. Unfortunately, the unbeaten streak wouldn’t hold up through the weekend.

Benedict suffered his first loss of the year in the semifinal round of the 150-pound weight class. However, he would bounce back to win both of his matches in the consolation bracket.

Benedict won the third-place match in overtime after securing a takedown to win the match 4-2.

Benedict is now 29-1 on the year with one regular season match left.

Senior Jacob Grey and sophomore Ethan Hutchinson were the only other Trojans to place in the top six of their weight classes.

Grey was pinned with just eight seconds remaining in the first round of the 126-pound fifth-place match by his opponent Nasier Parker of Silverado High School.

Hutchinson nearly got a win in his 190-pound fifth-place match. Unfortunately, his opponent, Daniel Lunday of Basic High School, was able to reverse the near pin in the second period.

Just after escaping Lunday’s pin attempt, Hutchinson was taken down and pinned with just three seconds left in the second period.

The Trojans will end their regular season with a road matchup in Boulder City on Wednesday, Jan. 25 to face off against the Eagles.

Following this match, Pahrump will have just over a week to get ready for the 3A Southern Regional tournament taking place on Saturday, Feb. 4 at Moapa Valley.

Wednesday’s matches are scheduled to begin at 7 p.m.