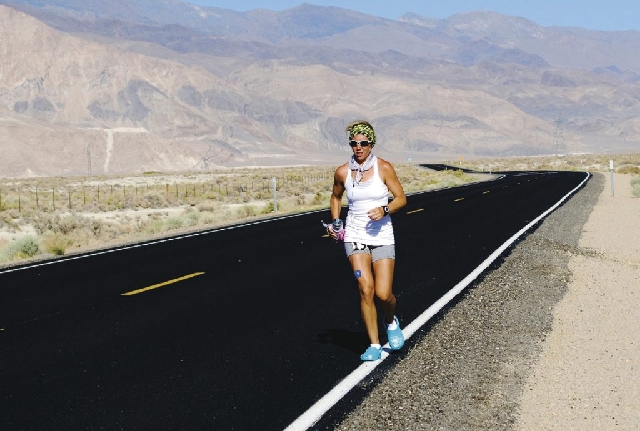 Ultra-marathoner Alexa Dickerson finished her first Badwater Ultra Marathon last year, when she finished 56th out of 96 runners and was the 10th female runner with a time of 38:53.

The AdventureCorps event is a grueling 135-mile trek through Death Valley — the hottest place on Earth. The race is billed as the toughest race on Earth. This year’s race will be on July 15.

Dickerson is the youngest female in the group, at 25, to compete in the run this year, and is a rising star in the ultra-marathon community.

The tough runner lives and trains in Irvine, Calif. She went to college at California State University, Fullerton and majored in kinesiology.

Today, she has a business coaching other ultra-marathoners and she is a certified personal trainer.

Dickerson spoke with the Pahrump Valley Times to explain her need to run ultra-marathons, her love of running and how she trains and survives these feats of strength and endurance.

It was your first time last year running Badwater. You finished, but many people have problems with water and nutrition during the race. Is there anything you would change about your nutrition program this year?

No, I really like the way the nutrition came out. I trained well for Badwater and got good advice from people. I am sponsored by Vitargo and the fuel kept me going the entire race. My crew did an excellent job with the water and electrolytes and I really had no problems running the race.

I have to ask this question. Why does anyone get into ultra-marathon running and how did you get into the sport?

I did track and cross country at El Toro High School. In my first years of college, when I was 19, I ran my first marathon.

I found out about ultras and did a 50k, which was horrible. I had no idea what I was doing. It was in the San Gabriel Mountains and over 100 degrees. I did not know about electrolytes and did not hydrate properly. It took me nine hours to do my first 50k.  It was really slow. I liked it though and signed up for more 50ks and did a 50-mile race. After that I ran a 100-mile race and I then just applied to Badwater.

Badwater is the ultimate in running. How do you train for a run in 120-degree heat? You live in Southern California so finding a place to train is not that hard. What do you do to prepare your body for such brutal treatment in the heat?

I did a little bit of heat training. I have not set foot in a sauna this year. I run in the heat. It has been in the high 90s where I live. For example, I went down to Palm Springs, and we did 21 miles in 124-degree weather.

Obviously the heat does not bother you when you run. The weather forecasters predict Death Valley will be around 120 degrees this year. Last year it was a bit cooler at around 114 degrees. Will this affect you in any way and will it change the way you run your race?

Anything over 110 and 115 degrees — I see no difference. It is just hot. I feel good in the heat. I was running strong in 124-degree heat. I am not too worried.

It may slow me down a bit. I will up my electrolytes and I will slow it down a bit between Badwater and Stovepipe. I am not too worried.

Your boyfriend is ultra-marathoner Mark Matiyazic. He finished 5th in the race, and you travel with him. Does this mean you run and work out together?

I don’t train like my boyfriend. He does things a lot differently as far as nutrition, and his training is different. We don’t run side-by-side. We have different training schedules. Our work schedules are different, and he is faster. He said I am too slow. When we go to Palm Springs, we go out at the same time and we will be within a couple of miles of each other.

Have you found racers in the Badwater community to be tight and are they willing to share information? Where do you get most of your answers to technical questions about the race?

I asked a lot of questions. A lot of it is common sense, but you learn things from your own experiences. You need to know what works for you and what does not. I have a coach for Badwater, Lisa Smith-Batchen. She has run the race for 10 years. She has coached me for the past two years. I have never run into a runner who was not willing to help or answer questions even on the race course. All the crews are out there helping everyone out. Everyone is super  nice and helpful to each other.

After the race you must feel the pain in your body. How long does it take for you to recover so you can actually run another race and can you run right after Death Valley? Is this race easier for you now that you have done one and several other ultra-marathons?

It will definitely be a hard race. I will feel it.  I will have more of an idea what to expect and I will be more confident going into the race. I had crewed for the race before, but running it and crewing the race are two different things. I did the Brazil 135 to prepare me for this race and I finished it and so I feel confident for this race.

Last year it took me a really long time to recover. I was really sore. Once I got moving, it was OK. It was only sore a little bit after sitting for a bit. I was really tired after the race, and it took me a couple of months to get my energy back. I would do short runs five to six miles and my heart rate was really high. I am hoping my body recovers faster this year. Everyone is different. I feel it takes me longer to recover. Some ultra-runners can go into this race and do another shortly after. I personally would not want to do that.  Some can do them back to back. Some runners just take two weeks. My boyfriend ran after Badwater — a month after.

Is running ultra-marathons an addiction for you, and are you addicted to the pain and the high the running gives you?

I don’t crave the pain by any means. It is a really good feeling of accomplishment once you finish. Some of the races that we have done just allow you to see cool places that you would not see if you were not on your own two feet. We have been all over. I have been down to Costa Rica and Brazil and Cabo. It is cool to explore, and it is a cool satisfaction knowing you can run it on your own two feet. Just doing it and having your crew there is fun. You are never there alone.

The 135 miles is a long time. What do you think about when you are running such a long race?

I remember last year for the first 40 miles of running I listened to my I-pod. I was just taking in the whole race. It was just surreal that I was running Badwater. I could not believe it. Then whoever was pacing me would help the time go by. We talked about random stuff just to keep my mind off the heat and how much further we had to go. I would go back and forth talking to them and the music. I was not running at a super-fast pace. My mother even walked with me up the Whitney Portal. I was so exhausted. She did that to take my mind away from how much pain I was in.

I talked to runners who ran this race last year from Australia, Japan, France and Mexico. They all said the Death Valley race was the toughest race in the world. You have a different opinion. What is the baddest race and why?

I thought that the Brazil 135 was the toughest. The Death Valley race is a lot more runnable. Brazil has more steep climbs. If you are straight out running Badwater is tougher. The hills were just insanely steep in Brazil. Death Valley has a 17-mile climb but you have 30,000 feet of elevation gain in Brazil, where Badwater has 15,000 feet. They are just different races, but it always seems harder when I am doing a race. I am sure when I am doing it I will think Badwater is the tougher one.