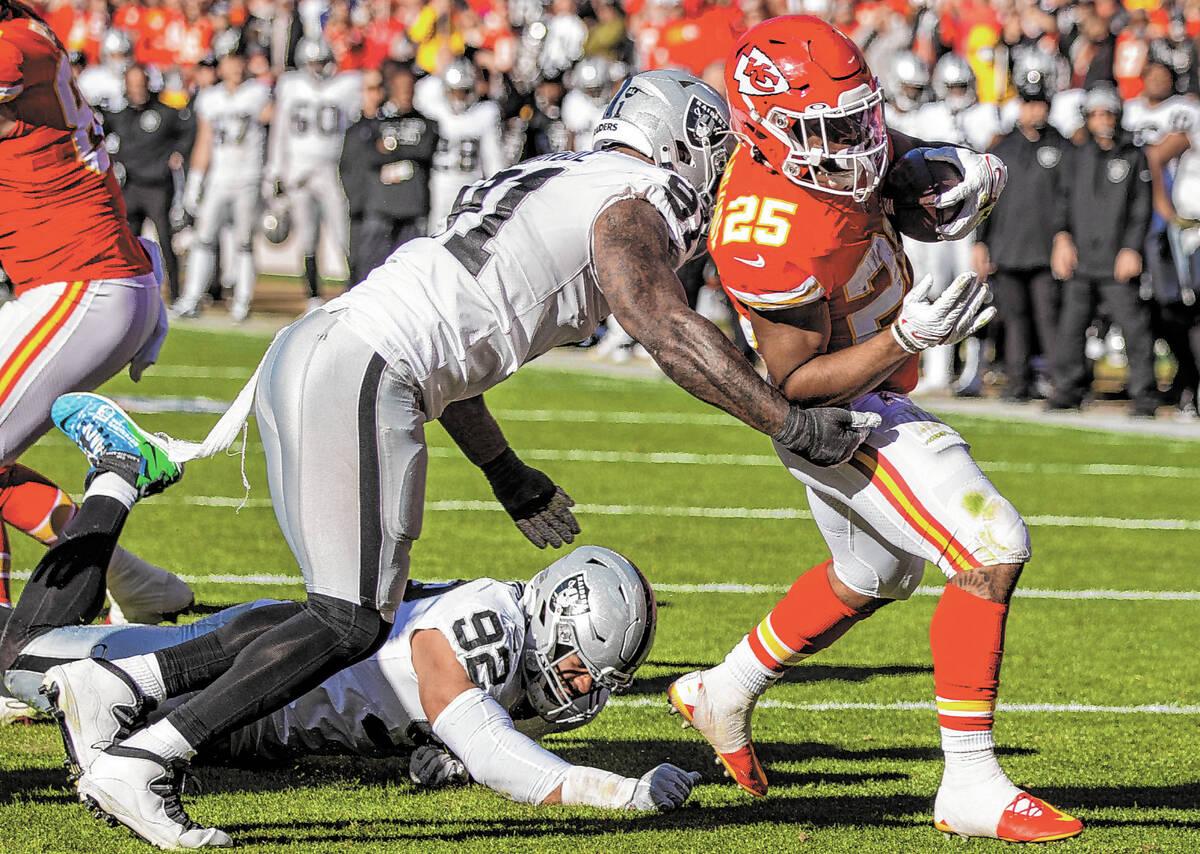 Kansas City Chiefs running back Clyde Edwards-Helaire (25) steps over the goal line as Raiders defensive end Yannick Ngakoue (91) and teammate defensive end Solomon Thomas (92) are unable to stop him during the first half of an NFL game in Arrowhead Stadium on Sunday, Dec.12, 2021, in Kansas City, MO. (L.E. Baskow/Las Vegas Review-Journal) @Left_Eye_Images 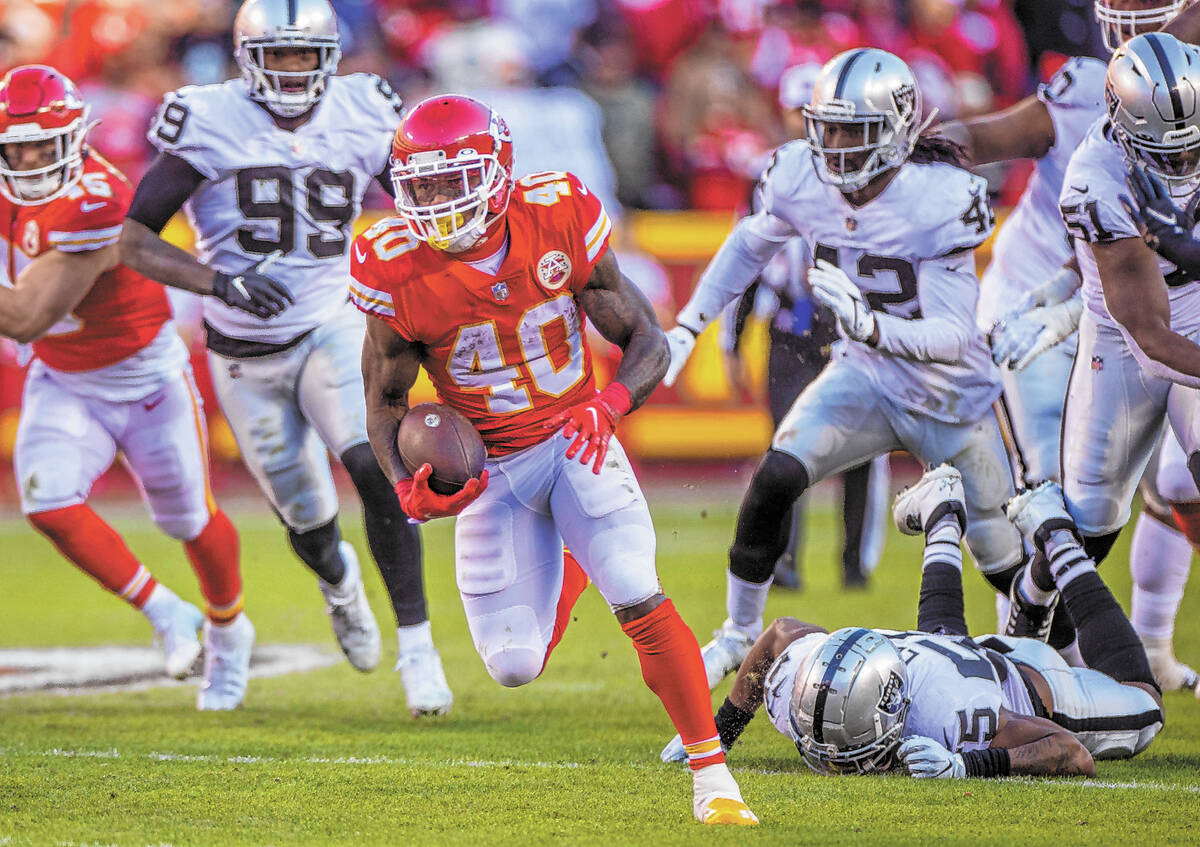 Kansas City Chiefs running back Derrick Gore (40) breaks for open ground and the end zone over the Raiders defense during the second half of an NFL game in Arrowhead Stadium on Sunday, Dec.12, 2021, in Kansas City, MO. (L.E. Baskow/Las Vegas Review-Journal) @Left_Eye_Images

The Las Vegas Raiders lost to the Kansas City Chiefs for the second time this season after losing on the road in Kansas City 48-9.

With this weekend’s loss, the Raiders have dropped to under .500 for the first time this season. They currently sit fourth in the AFC West with a record of 6-7 and only have four games remaining on their regular season schedule.

If the Raiders hope to have any shot at the playoffs, they need to win at least three, if not all four, of their remaining games. What was once a promising start to the season is now looking like a complete downward spiral.

In the early parts of the season, all anyone around the organization kept saying was that this year’s team was different from previous seasons. That doesn’t look to be the case.

Unless the Raiders can turn things around quickly, this will be the third consecutive season they had at least six wins by week 12 and finished at or below the .500 mark.

With this week’s loss to the Chiefs, it marks the third time in the last four seasons that the Raiders were swept in the regular season by Kansas City. The only year they weren’t swept was last year as the Raiders’ first season in Las Vegas.

Many people know that game as when Gruden and the rest of the team took a victory lap around Arrowhead Stadium in Kansas City after their win.

On Sunday, the game went downhill for Las Vegas from the opening whistle.

After receiving the opening kickoff, the Raiders started with the ball on their own 25-yard line. On the first play of the game, running back Josh Jacobs took a handoff to the left side of the field. As soon as he was hit, the ball popped out and the Chiefs defense returned the fumble recovery for a touchdown less than 20 seconds into the game.

The Raiders turned the ball over a season-high five times on Sunday. Four of the five turnovers were fumbles. After the game, interim head coach Rich Bisaccia expressed his frustrations with the high amount of turnovers.

“It was bad in all phases,” Bisaccia said. “No chance of winning a football game when you turn it over five times. I think the last turnover going down on the last drive was probably a microcosm of what the whole game looked like.”

Even with the very slow offensive start, quarterback Derek Carr still managed to throw for 263 passing yards in the game. He only had one touchdown pass, which came in the final minutes of the third quarter.

Carr’s touchdown throw was the only touchdown for the Raiders the whole game. Their only other score came on a last-second field goal to end the first half. The Raiders went into halftime trailing 35-3.

With tight end Darren Waller still dealing with a knee injury, wide receiver Hunter Renfrow was Carr’s go-to receiver. Renfrow finished with 13 catches on 14 targets for a game-high 117 yards and one touchdown.

“I’m just so proud of him,” Carr said of Renfrow. “I’m so happy for him, the success that he’s having. He’ll be the first one to tell you, he’d trade any of these 100-yard days or catches for wins. I think that’s what I love about him the most.”

Kansas City’s rushing attack was led by rookie running back Derrick Gore. He had 66 rushing yards on nine carries and one touchdown. His score came on a 51-yard rush in the middle of the fourth quarter.

The Raiders are hoping to right their ship next weekend when they travel to Cleveland to take on the Browns in a Saturday afternoon showdown. The Browns are coming into the game after getting a huge win against the AFC North leading Baltimore Ravens.

Kickoff for the game is scheduled for 1:30 p.m.