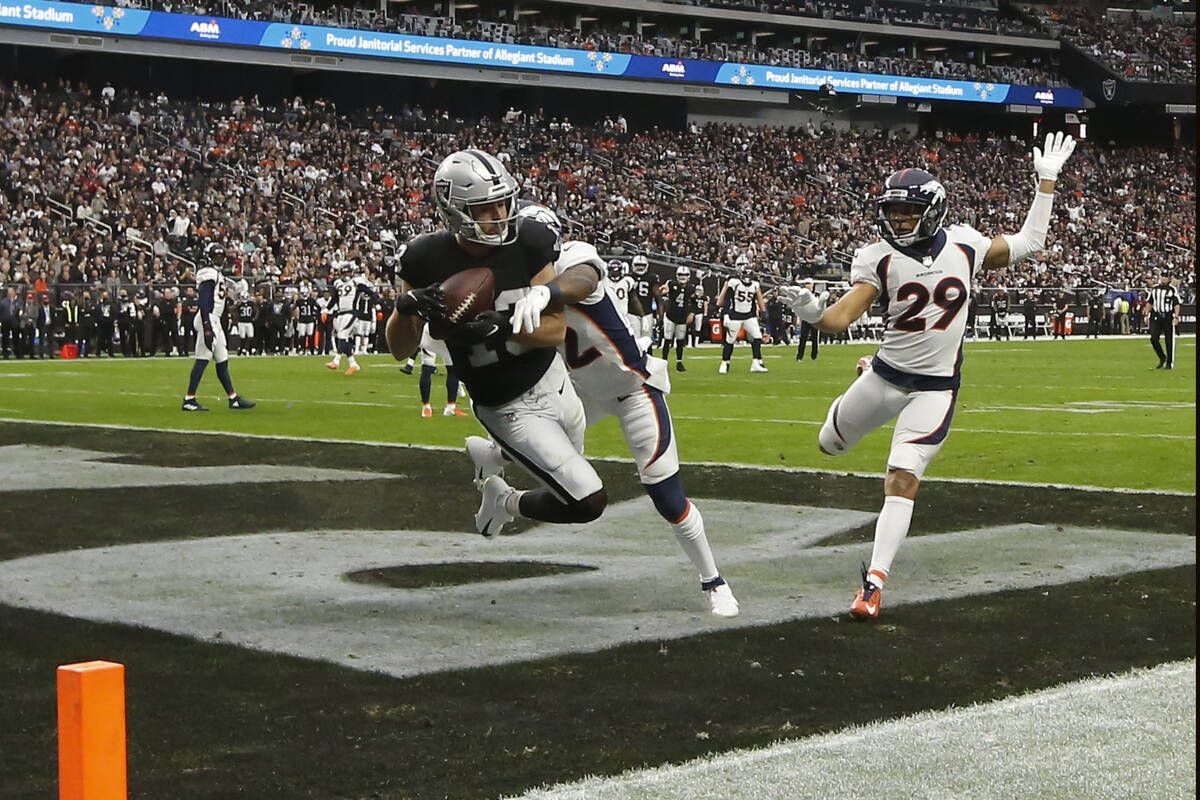 With their 17-13 win on Sunday afternoon, the Las Vegas Raiders have swept the Denver Broncos for the second consecutive season.

On top of sweeping the Broncos, the Raiders have improved their record to over .500 for the first time since their Thanksgiving win over the Dallas Cowboys and they have also kept their playoff hopes alive.

Las Vegas is looking at an 8-7 record for the year and are currently just one game back of the final wild card spot.

On Sunday, the Raiders put together one of their best defensive efforts of the whole season. They held the Broncos scoreless in three of the four quarters, with the second quarter being the only one where Denver got points.

“I really haven’t come up with a word yet of how to describe it,” interim head coach Rich Bisaccia said regarding the team’s defense. “First and foremost, I would say it was outstanding, it was phenomenal, it was awesome. It was a relentless, competitive effort down in and down in. Can’t say enough about how excited we are about the way our defense played.”

10 of the 13 points by the Broncos came from two Las Vegas turnovers in their own territory.

The first turnover was a fumble by Raiders running back Josh Jacobs, which led to a Denver field goal, and the second turnover was a Derek Carr interception in the final seconds of the second quarter that was returned to the 1-yard line by Bradley Chubb.

The very next play, the Broncos punched the ball in on a 1-yard touchdown run by Javonte Williams to give Denver a 13-7 lead going into halftime.

Despite these two costly turnovers by the Raiders’ offense, they were able to rally in the second half thanks to an opening touchdown drive ending in a 5-yard Peyton Barber rushing touchdown.

Las Vegas’ defensive end Maxx Crosby played a stellar performance against a team that he has thrived against since entering the league. He finished the day with three tackles and one critical sack early in the game after the Raiders’ defense was flagged for two huge penalties.

“From practice, to the weight room, to meetings, I always try to keep things positive and keep things light,” Crosby said after the game. “We have a golden opportunity. At the end of the day, we basically control our destiny. We gotta just take it one week at a time. I love playing this game.”

Carr finished the day completing 20 of his 25 pass attempts for 201 yards and one touchdown pass to wide receiver Hunter Renfrow. Carr has now thrown for over 200 yards in all but one game this season.

With the rushing attack lacking all season, Jacobs tied his career-high in rushing yards with 129 yards. This was the first time this year that Jacobs crossed the 100-yard mark.

If Las Vegas can win both of their remaining games, they’ll be in prime position to take the 7th seed and sneak into the playoffs.

But, that’s a steep hill for the team to climb.

Next Sunday, the Raiders will be traveling to Indianapolis to take on the red-hot Colts, who have won eight of their last ten games. The Colts have been plagued by the COVID bug over the last week, but were still able to get an upset win in Arizona on Christmas Day over the Cardinals. Las Vegas will need to play at the top of their game if they hope to knock off the Colts and continue their path to the playoffs.

Kickoff is scheduled for 10 a.m.