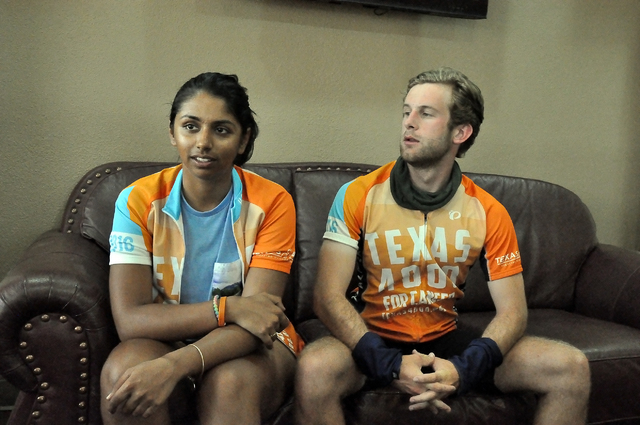 Horace Langford Jr / Pahrump Valley Times Two exhausted riders from the Texas 4000, Geetika Rao and Matthew Schneider talk about their trip to Anchorage, Alaska in the lobby of the Best Western Hotel. General manager John Cousins donated two rooms so that the riders could shower. 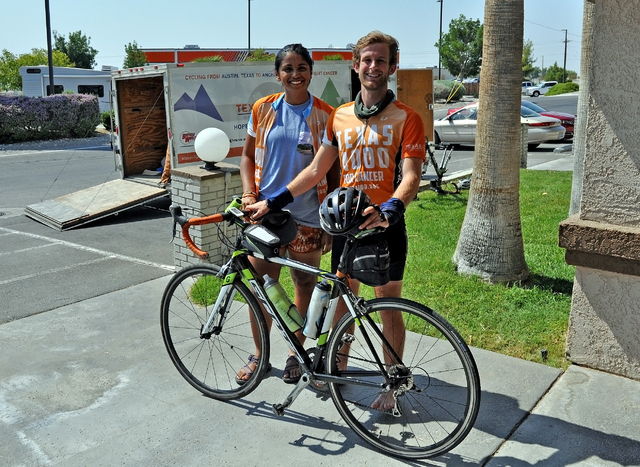 Horace Langford Jr / Pahrump Valley Times Texas 4000 riders Geetika Rao and Matthew Schneider pose with Schneider’s Scott Bike. The Texas 4000 got a deal on the bikes from a local Texas bike dealer that gave the organization 30 percent off. 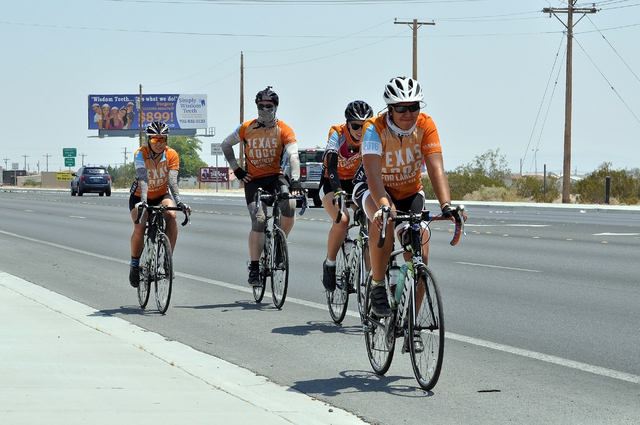 Battling fatigue and intense 106-degree heat, 23 cancer awareness riders from the organization Texas 4000 arrived in Pahrump around 1:30 p.m. from Las Vegas on Saturday.

The riders were on their 22nd day of riding and originated from Austin, Texas and are traveling to Anchorage, Alaska in a 70-day trip to raise money for cancer research. All the riders are students at the University of Texas.

The organization stops each day and spends one day in a host town. This was the first time the Texas 4000 had come to Pahrump. The reason for this is one of the riders, Mike Tatalovich hails from Las Vegas and so the group stayed one night at Tatalovichs home town. The route changes from year to year.

Over the weekend, the group not only battled the desert heat, but also dense smoke from California brush fires.

The smoke was bad and it was hard to breathe, rider Matthew Schneider said. I wore this garment around my face which helped a little bit but my throat still hurt after the ride (pointing to a bandana).

Schneider said the training for the ride is an 18-month process, which started for him in 2014. He said he joined the organization because his father had prostate cancer.

My father passed away in July of 2015, which was a year after I joined, Schneider said. I ride for him. I think my joining the organization helped him. He was so proud of me and he is now riding with me.

Schneider said he felt good after the first 22 days.

I feel great, he said. And I am surprised how good I feel. I think the first two weeks for me were the hardest on my body because it had to adjust to the fatigue.

The riding affects everyone differently but the group had no problem tackling the steep Spring Mountain pass in the Las Vegas heat. They had already crossed similar mountain ranges in Utah and Arizona.

If you look at the mountain from a distance it can be intimidating, he said. Its a mental game and once you start on the hill, the climbing is not so bad.

Geetika Rao, a fellow rider, talked about the intense training the cyclists received prior to the trip.

Prior to the trip, all 66 riders received leadership classes, do community service and attend various seminars to prepare for the trip, she said. We also all have to complete 2,000 miles of bike training too.

According to Rao, 63 out of 66 of the riders were not serious cyclists prior to the trip.

Rao said the riders were affected by the desert heat but were used to it.

The heat of Texas and Arizona prepared us for this heat, Rao said. I try to treat each ride as a separate ride. I feel good so far and really only have a tightness in my quads. The heat just slows us down a bit.

She said she also joined for a personal reason. She studies human biology at the University of Texas and got involved in a cancer research lab and this motivated her to join the organization.

Then my dads close friend came down with stage four pancreatic cancer and she passed away the day I got in, she said. So this ride became very personal.

Both riders agreed that part of their mission on the ride is to engage the communities they ride through and this leads to conversations with some inspirational and interesting people.

One such person they had met in St. George, Utah.

We met this bike mechanic, John, Schneider said. He donated all his time to work on all our bikes and looked at each one at his cost. He told us he had lost someone close to cancer.

While on their ride on the Sierra Route, which is one of three routes that the Texas 4000 uses, crowds of people gave them food and provisions in some towns. Three routes are used so that the 66 riders can maximize exposure and impact on the ride to Anchorage.

The other riders that are taking the other routes to Anchorage say we are spoiled because we get so much attention, Rao said. Some towns we have been going to since 2004 and so they know we are coming and they give us lots of food. Publicity helps too.

According to Rao, the PVT article on the ride got the general manager of Best Western, John Cousins, to donate two rooms so that the riders could take a shower and clean up.

Cousins even rode with the Texas 4000 in support of their cause.

The riders spent the night at the Pahrump Valley Methodist Church, where they were fed and gave a presentation. Lori Wilson, one of the church organizers, said the church had no problems feeding them and giving them a place to stay.

We let them stay at the church, but they had to stay on bed rolls, she said.

The group headed for Hawthorne on Tuesday and then from there they ride out of Nevada and into California, visiting Yosemite and Lake Tahoe.