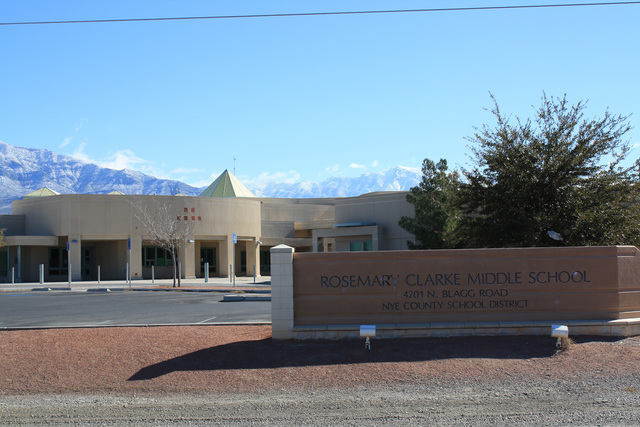 The Rosemary Clarke Middle School boys basketball A-team was on the road last week playing against Faith Lutheran and then competing in a tough tournament in Las Vegas. Special to the Pahrump Valley Times

The Rosemary Clarke Middle School boys basketball A-team was on the road last week playing against Faith Lutheran and then competing in a tough tournament in Las Vegas.

Sharks coach Adam Lightfoot said the week’s games were tough and his boys finished the competition winning one of six games.

The A-team, which is eighth graders, played at Faith Lutheran Thursday and lost, 43-21.

The first was on Friday and the Sharks A-team lost to Schofield 47-29. Andrew Avena and DC Hollis were the high scorers in that game; Avena made eight points and Hollis made six points.

The second game was on Saturday against Cortney and the Sharks A-team lost 40 to 12. Avena scored 6 points and there was a tie between Cameron Gabrylczyk and Daniel Gomez for second with 2 points apiece.

The third game was on Saturday against Tarkanian, and the Sharks lost 43 to 24. Avena and Gomez were the team’s high scorers again, Avena made eight and Gomez scored five.

The fourth game was a win. The Sharks beat Burkholder with a final score of 36 to 28. The high scorers were Avena with 13 and Hollis with seven.

The fifth game was another loss. This time the team played Webb Middle School. The final score was 52 to 15. The high scorers were Hollis with five, and Jacob Lopez and Andrew Avena tied with four apiece.

Note: The A-team was the only RCMS team able to prepare stats and scores for this summary before deadline. PVT sports was aware the boys B-team and girls A and B teams also played and will work with the school to get more info.