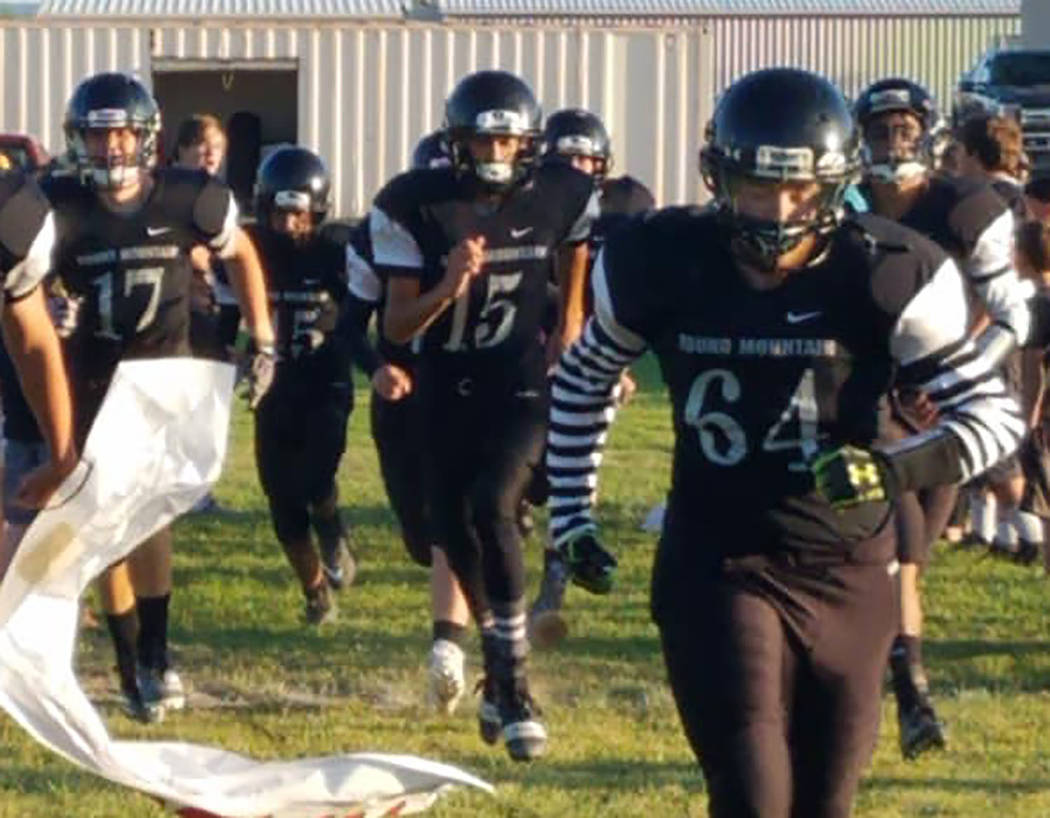 Special to Times-Bonanza & Goldfield News Round Mountain High School football players take the field for their opener against Carlin. Because of injuries, the Knights were forced to forfeit during the second quarter and eventually cancel the season. 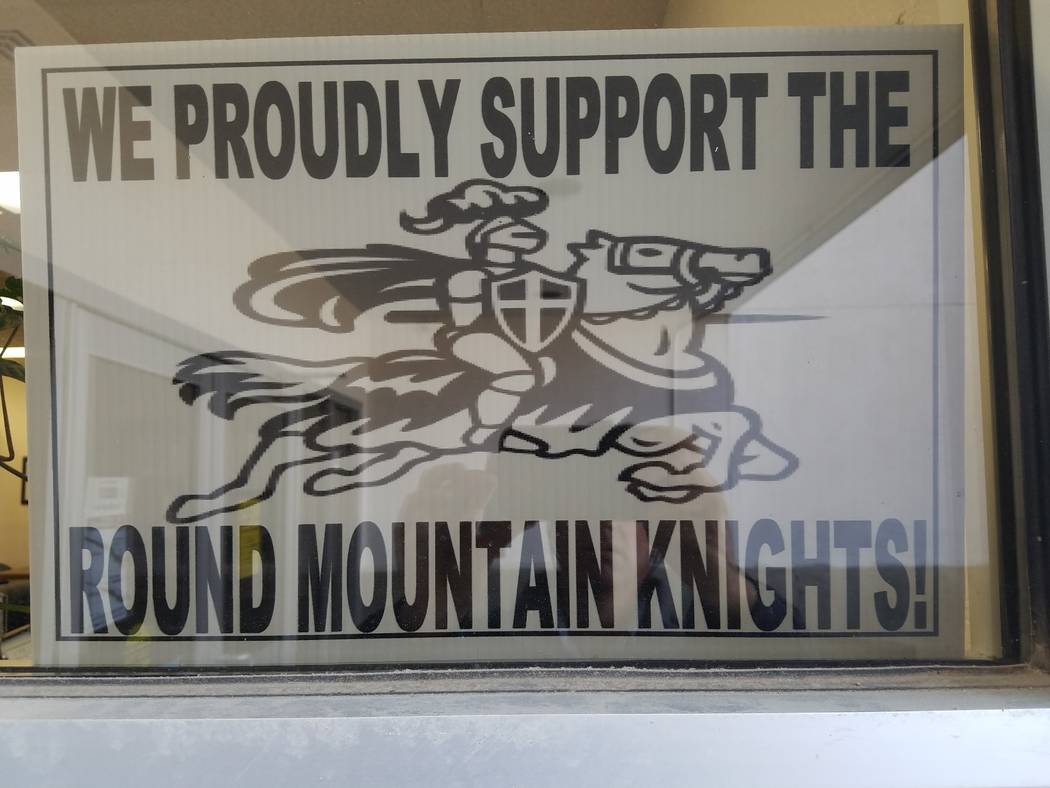 David Jacobs/Times-Bonanza & Goldfield News A sign, as shown in a file photo, shows support for the Round Mountain Knights. The Knights opened the 2019 season with 11 players on the roster, but four players were injured in the opener. 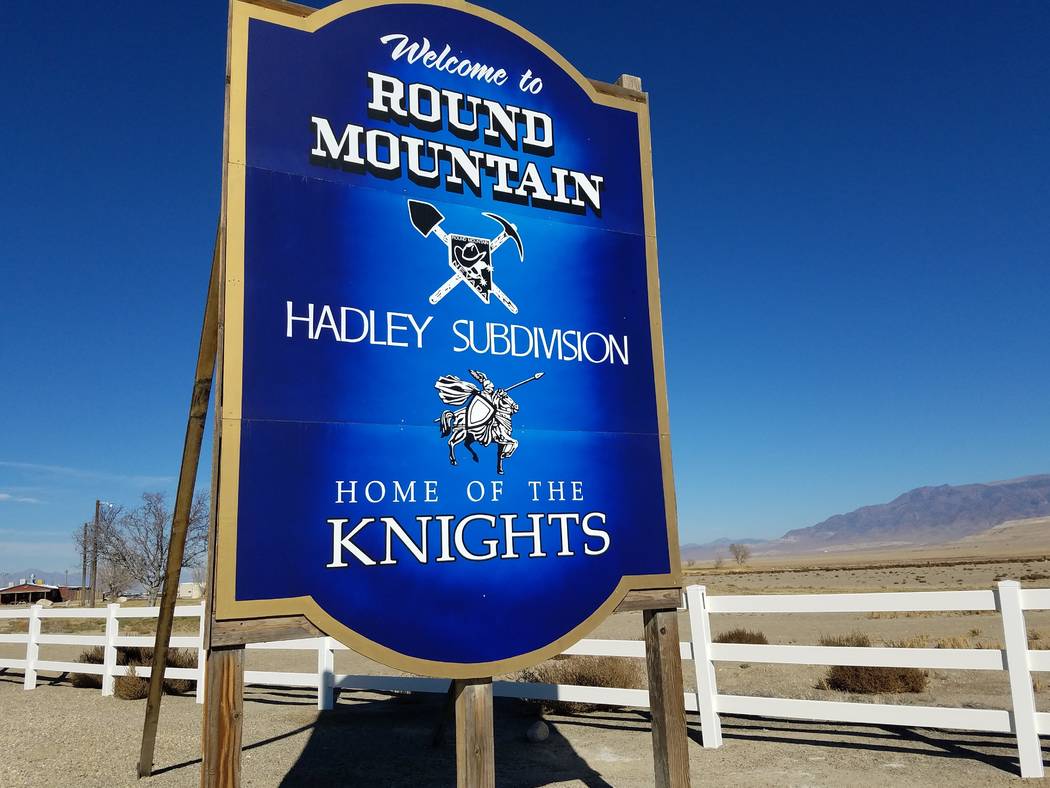 David Jacobs/Times-Bonanza & Goldfield News A sign welcomes people to the community as shown in this file photo. The football season is now canceled in the town.

Football season has been a mixed bag for Nye County high schools.

While Pahrump Valley got its first win Friday night after two losses, playing three games that are eerily similar to the first three games of the 2018 season, Tonopah had its opener canceled, won by 50 in its first game and won a wild 76-70 game Friday night. Beatty, which already was the last county school to have a game scheduled, will not open until Friday afternoon because its opening night foe, Round Mountain, canceled the game because of a lack of players.

Round Mountain went one step further Wednesday morning, as Jake Topholm, the school’s athletic director, announced the season would be canceled.

“I had to make a very difficult decision today, and that decision was to cancel the high school football season for the 2019 season,” Topholm posted on the Round Mountain Football page on Facebook. “The decision was based on the number of players and safety for our kids.”

The Knights opened the season with 11 players on the roster, but four players were injured in the opener against Carlin, forcing a forfeit. Games against Wells and Beatty were canceled, but there was some hope players could return in time for the league opener Oct. 5 at Coleville.

On Aug. 30, the date the Wells game was supposed to be played, a message asking for students interested in playing football was posted on Facebook. Assistant coach Rickey Stewart said they had hoped injured players would be able to play and some new players might be recruited, but at a school that is tiny even by Class 1A standards, that was an unlikely prospect.

Even so, Topholm said that it wasn’t an easy call to make.

“Hardest decision I have had to make in 19 years,” he said. “It was not an easy decision to make. I went back and forth with it for over a week.”

“We need at least 12 and could not get there,” Topholm said. “We tried to play the Carlin game with 11 and did not even make it to halftime.”

Even so, the decision to cancel the season was tough for the players, said assistant football coach Rickey Stewart.

“Not very well, especially the seniors,” Stewart said of how the Knights took the news. “This is the problem with remote small towns, unfortunately.”

Despite the small enrollment, Topholm said Round Mountain has been able to field teams in football, girls volleyball, girls golf, boys and girls basketball, baseball and softball without a numbers crisis.

“We have not had this problem before,” he said. “We have always made it through all seasons since I have been in Round Mountain.”

Stewart is still going to coach football this fall with an eye toward the Knights getting back on the field in 2020.

“I am going to help with the junior high football team,” he said. “That is our future, six eighth-graders, so they will be our next year’s majority.”

Stewart said the middle school team has 11 kids and was scheduled to open its season last Friday night in Tonopah.

“Sadly, the high school season is over, but I do ask that you all support our volleyball, golf and junior high football teams that still have seasons to play. Thank you all for supporting us, and go Knights!”