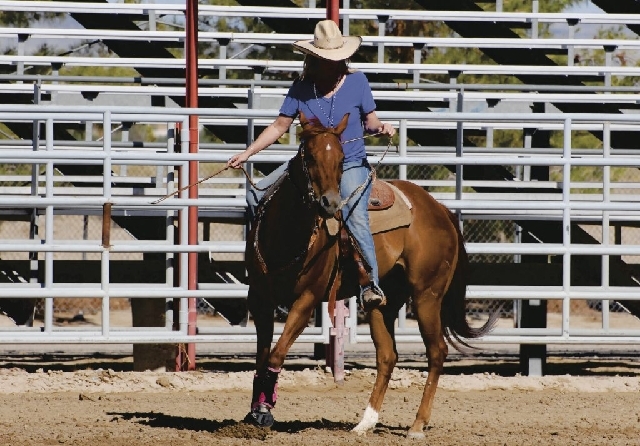 Barrel racing coach Robin Roberts is a newcomer to Pahrump.

Many people know her simply because she is well known in Las Vegas.

She didn’t grow up on a ranch surrounded by horses, but grew up in a city environment in Las Vegas.

Her parents raised five children and she was the only one that took up riding.

This horse lover spent her childhood struggling to soak up everything she could about horses.

Roberts was born in Wyoming and they set her on a horse as soon as she was able.

At 11, she got her first horse, but that was after they moved to Las Vegas.

To immerse herself in horses, Roberts often traveled back to Wyoming.

“My uncle had a cattle ranch. I would spend all summer on the ranch,” she said.

When she was 12, she started her own 4-H club to learn even more.

“There were six of us and we created our own little 4-H club. None of us really knew what we were doing, but we got the handbook out and we did what we thought was our version of 4-H. We also put on a gymkhana. We just got a book out and did it. So I have been putting on horse functions since I was 12.”

The gymkhanas she did were full of fun events such as a boot race, which required participants to race to their boot and then jump on a horse. There also was an egg race, where each rider put the raw egg in their mouth and completed a pattern on horseback and hope the egg did not break. Of course, the fastest times in each event won.

“They are thinking of doing some more things like that out here, but the sissies out here put the egg on a spoon,” she said.

When Roberts reached her 20s, she was still starving for more information about horses. She dabbled in horse shows for a while and trained under Don Triolo, the well- known Las Vegas show trainer.

“At that time, I tried a little bit of everything. I rode English saddle, did shows, I have also dabbled in reining,” Roberts said. All these disciplines shape the way she teaches today.

Showing horses at an early age has given her solid background and a different way of training barrel horses.

After a horse is broken, many barrel racers go right into teaching barrel racing. Roberts has a different approach. She teaches them how to be a show horse first. She says many of the turns and elements of showing are also the rudiments of barrel racing.

“If the horse does not work out as a barrel racer, it doesn’t know much, but if it has learned to show it has something to fall back on,” she said.

Roberts would like to start taking on students in Pahrump. She was teaching in Las Vegas and moved out here because Las Vegas just had too many restrictions on horse owners.

“I teach basic riding. I know a lot of people specialize,” she explained. “I know not everybody wants to compete. If you want to go on and barrel race, I will teach you that. I would like to hit those people who just want a horse and are just starting to ride.”

As an instructor, she has come across some common misconceptions about riding lessons.

Roberts said the biggest misconception is students expect the horse to be saddled and ready to go.

“I am not a dude ranch. If you can’t clean their feet and let me teach you how to put the saddle on, then the lessons will end there,” she exclaimed.

Another big misconception is people think they can take one to three lessons and it is all done, or they can bring their horse in and just start up barrel racing.

“People would come and say ‘I want to barrel race’ right off and they don’t even know how to ride yet. They don’t realize they will need at least a year of lessons before they can get to that,” Roberts said. “People want everything all at once, and it can’t be taught like that. This happens a lot especially with adults. Children can be more patient.”

Over the years, Roberts has run into well-meaning people who have never owned a horse and they want to do the right thing so they adopt a wild mustang. She says this is a big mistake and another misconception. People think it’s easy to take a wild horse and tame it.

“That is like somebody who never owned a dog before and they adopt a wolf. He may not eat you but he can and will kill you. It will probably be an accident.

“A mustang will turn around and kick you in the end and not think twice of it. If people come up to me and tell me they need to learn to ride because they adopted a mustang, I will not teach them because they will end up dead and I will not be part of that,” she said seriously.

Roberts believes she is excellent with children.

“I love teaching kids,” the instructor said. “I love kids because most of them haven’t had a chance to form bad habits. Things have changed on how kids learn to ride. It’s easier to teach someone fresh than unteach them and retrain them. Sometimes I would get an abrasive adult who refuses to change and says, ‘I have always done it that way.’ I am not going to teach you an incorrect way.

“I will also give them lessons on their own horse, but the problem I run into a lot of times is the horse is not suited for that person. If that is the case, I can get on them and fix that, but if it is really young and bucking I will refer it to someone I know.”

If you would like to have more information on riding lessons call Roberts at 702-517-7376.