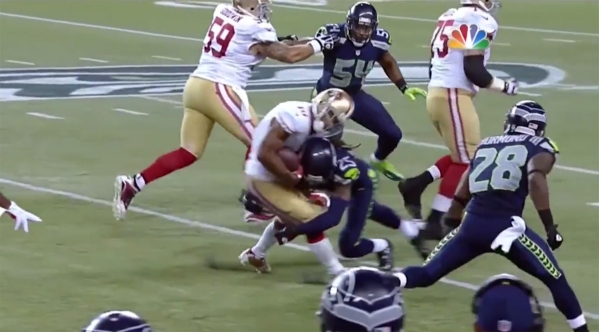 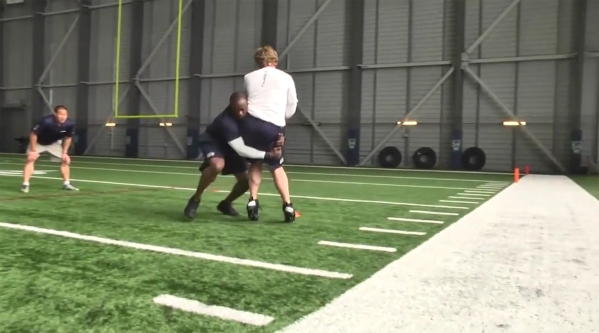 People who grew up playing the game of football probably remember their coach yelling at them, “Stick your head right into his chest.” Those days are now gone with the recent focus on prevention of head injuries. Nye County schools find themselves seeking new ways of tackling to make the game safer.

The old tackling methods required kids to use their head. One method required players to put their facemask right on the chest of the opposing player. Another had kids throwing their head across the body of the other player.

According to local football coaches, those tackling methods are on their way out.

A big proponent for change is Rosemary Clarke Middle School coach Dave Wright. He said his program has adopted a new method, which is being supported by Seattle Seahawks coach Pete Carroll, who has found a method which eliminates the head when tackling.

Change started to come In the National Football League in 2010 when the league expanded the defenseless player rules to basically eliminate hits above the shoulders.

Carroll felt he had to change the way his players tackled so he researched new methods of tackling and this led him to rugby. What he found in rugby impressed him so much he adopted their method.

“Carroll looked at rugby because they do not use helmets, tackle a lot in the game, but have few head injuries,” Wright said. “He found that the key to this is the way they tackle.”

Wright said Carroll found that rugby players don’t lead with their heads when they tackle.

“In the rugby tackle, you are taught to drive your shoulders through the thighs of the opponent,” Wright said.

This method is not only adopted by the middle school, but is being taught at the Pop Warner level and at Pahrump Valley High School.

The middle school coach credits Trojans coach Adam Gent for getting him on board with Carroll’s method.

Gent likes Carroll’s method because it takes the head out of the equation and it is easier to teach and learn.

“I remember in college my old school coach yelling at me for not getting my head across,” he said. “I have always felt that method was awkward. Pete Carroll’s way is very physical and Carroll has a reputation for good tough defenses.”

Gent said he used the method in Provo, Utah with great success.

“The method is very natural. We tell the boys, ‘Eyes through the thighs,’ and our tackling has improved drastically this year,” Gent said. “There is a reason why rugby has less head injuries than football and that’s because they take the head out of tackling. Pete Carroll preaches and teaches ‘the strike zone’ and keeping the head out of football.”

Gent said, “It allows you to be safe, but still very physical. I’ve seen a lot of different ways to coach tackling. Some ways look better on paper, head across the bow, and some ways just flat out work better and are more consistent.”

Other schools in the Nye County School District are emphasizing this technique or other methods involving leg tackling.

Taking the head out of the equation is also popular with Beatty and Tonopah. Muckers coach Duffy Otteson agrees that leg tackling is much safer.

“That is some good stuff (Pete Carroll’s method),” he said. “We haven’t done it this way, but very similar. Our tackling stems from a wrestling double leg. You hardly ever have a head injury from that and always in a good stance and can move side to side.”

“I have been using it for quite a few years,” Verzilli said. “We started using it to help prevent neck injuries, now it’s all about concussions. We teach head in front of ball carrier (if tackling at an angle), face up (head up does not translate well so we say face up) neck bulled, shoulders hip level or lower, wrap grab cloth, stay on your feet and drive through the ball carrier.”

Although popular in Nye County, the method had originally drawn some fire from one of the top coaches in college football, Urban Meyer, the Ohio State coach.

In an interview by Jon Solomon for CBS Sports, Meyer said he was against it at first.

“Rugby tackling “was one that I fought at first and I said no, we’re not going to do that,” Meyer said.

Meyer eventually changed his mind and is now one of its biggest advocates.

“I listened,” he said. “I did as much research as I could and ultimately we jumped in. The idea was a tremendous success right out of the get-go. You could see the difference.”