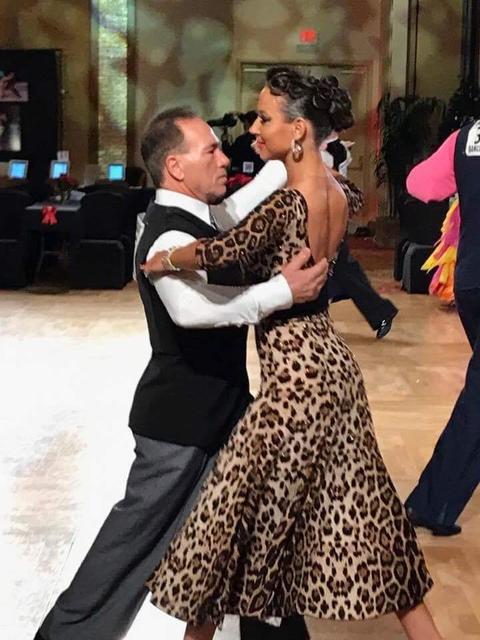 Gary Miller and his instructor Sophia Konstantinova tear up the dance floor doing the tango at the Nevada Holiday Dance Classic on Dec. 8 at the Tropicana Hotel in Las Vegas. Miller has only been dancing for about eight months. Special to the Pahrump Valley Times 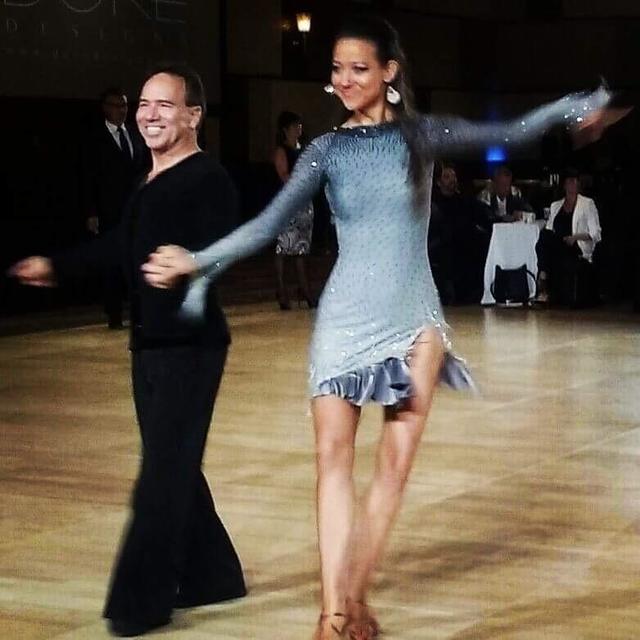 Gary Miller and Sophia Konstantinova at the Pan American Nevada Ball Dance Sport Championships at the M Resort on Aug. 18. Special to the Pahrump Valley Times

Some people can’t sit still and they just have to fill that void.

Gary Miller is one of those people. At the age of 65, he got the dance bug and is living proof old dogs can learn new tricks.

“Since April of last year I have been doing competitive ballroom dancing in Las Vegas,” Miller said.

He said he started off with Latin dancing, the rumba, cha-cha and swing.

“My favorite is the rumba,” he said. “I like it because it’s a very exotic, sexy moving dance.”

Miller got into dancing because he was always dancing for recreation.

“I just love to do dance,” he said. “I would go to the Nugget and just dance for fun, but never had any formal instruction in it.”

In December, he did the Nevada Holiday Dance Championships and danced the tango, foxtrot and the waltz and was awarded two third places and three second places out of nine couples for his efforts.

“I am still a beginner dancer and go to classes twice a week,” Miller said.

Konstantinova, who has been dancing since she was four, had a lot of praise for Miller. She said he has some natural ability and that she likes his confidence.

“He has a winning attitude and I like his mentality,” she said. “I do a lot of competition dance and we have been dancing together and have been successful.”

She said Miller is a special case.

“He has many excuses for not dancing,” Konstantinova said. “His height, his age, or he can say it hurts too much to dance, but he doesn’t complain. He is goal-driven and refreshing to work with. And more importantly, he is willing to work hard at it.”

Konstantinova sees a lot of dancers and she said for learning new skills, Miller has a lot of confidence. She has had a school in Las Vegas for over three years and another school in California.

She said it takes a certain kind of person to be successful at it because in ballroom dancing you are dancing with a partner.

“Dance becomes addictive and you must truly want to do it,” the instructor said. “You have to love learning and you must work well with others.”

Konstantinova said she specializes in seniors who want to learn and in teaching new talent.

“I love the challenge in teaching students new to dancing and I enjoy looking for new ways to teach and explain moves,” she said.

Las Vegas was the place for Gary Miller because they offered him ballroom dancing.

In Pahrump, there is competitive dancing with VIP All-Stars, who offers hip-hop and ballet classes and hopes in the future to offer ballroom dancing soon. Their phone number is (775) 537-3629.

“We are the only school that offers competitive dancing,” owner Natalia Rodriguez said. She said her school also offers gymnastics, cheer, and has new boxing and jiu-jitsu classes.