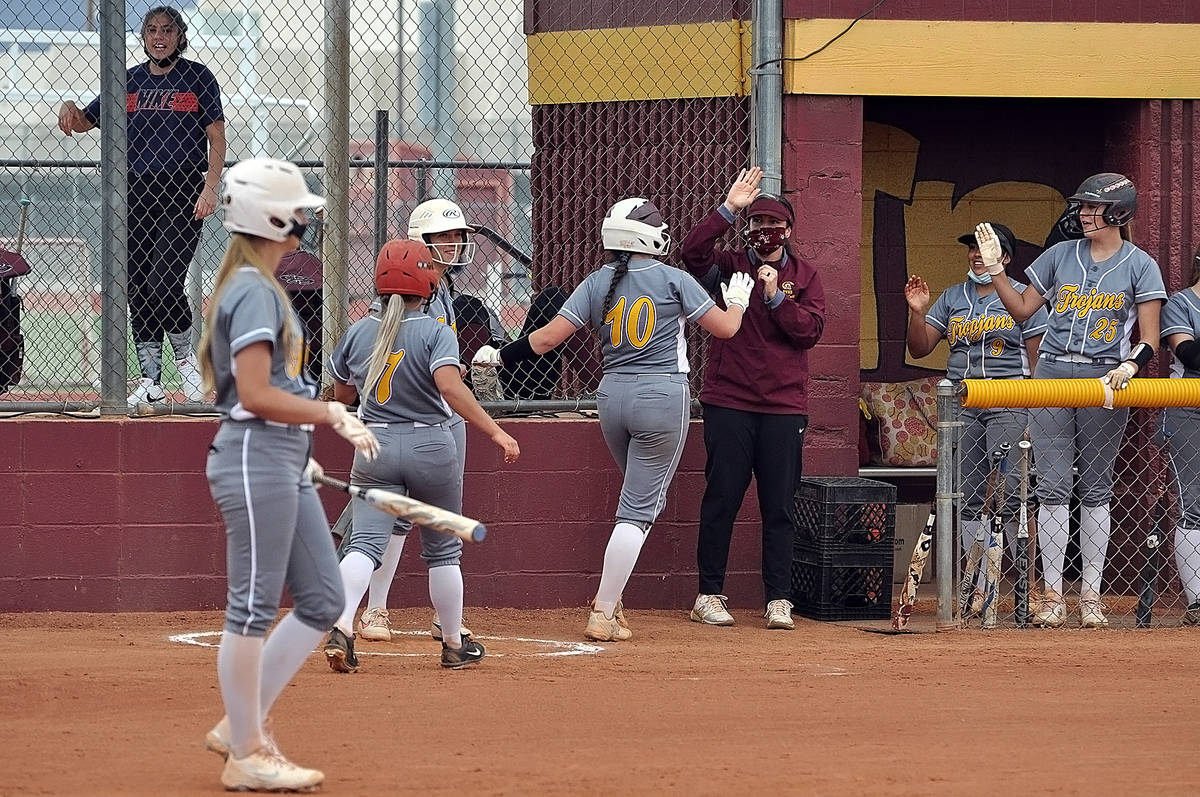 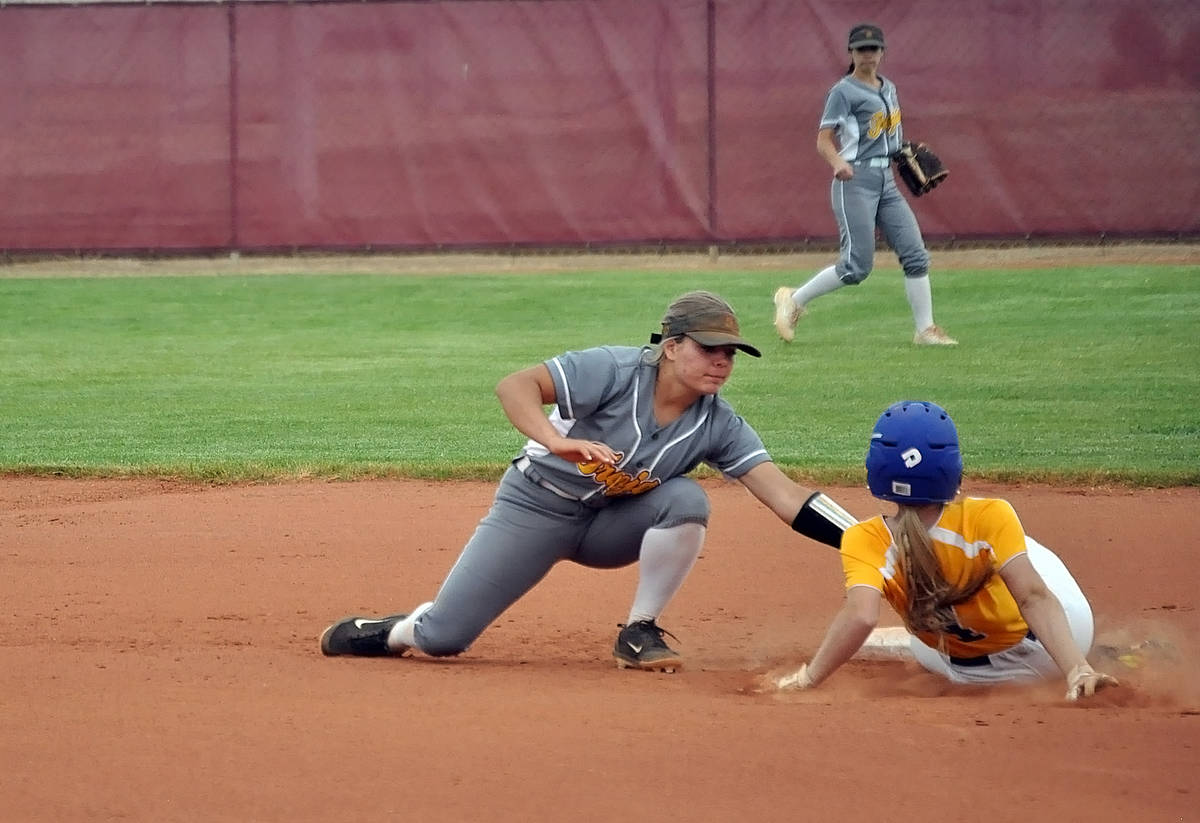 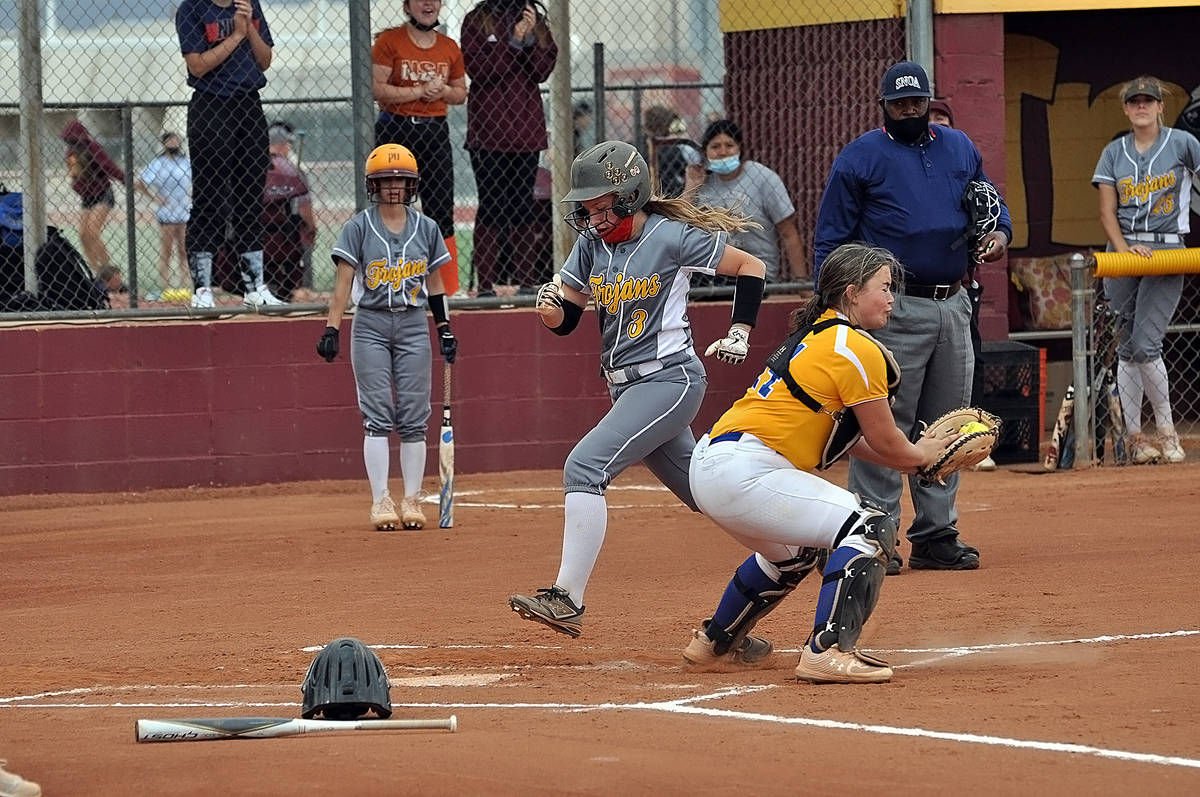 It didn’t seem to matter if the balls went sailing over the fence, such as Ava Charles’ 2-run home run in the third that gave the Trojans a 7-1 lead, or were sent into the outfield, such as the RBI single by Ciara Stragand that ended the 13-3 win over the Pirates at Floyd Field, they made solid contact throughout the game.

“It was straight down the middle,” Charles said of the pitch she hit over the fence. “It was right there. She was throwing me strikes first pitch, and I missed the at-bat before. But I knew it was coming again, so I was like, it’s a good pitch and I’m going to swing. I’m not going to miss, either, because it’s right there for me.”

But almost everyone was hitting the ball well against the Pirates.

“I think the last few days, even since Gorman’s game, things are clicking,” Trojans coach Cassondra Lauver said. “Things are starting to come together. They are feeling more confident at the plate, they’re feeling more comfortable with their swings, and they’re just more sure of themselves. I’m excited for them.”

The best display of that confidence and comfort came during the third inning, when Pahrump Valley connected for 5 hits and scored 3 runs. Makayla Cadwell ripped a single, Allanah Coen followed with another one. A fly to left was followed by a double by Kalea Whitney. Ally Rily ripped a single, as did Dee Dee Egan. Cadwell, Coen and Rily scored during the outburst.

“We had some lasers,” Lauver said. “We didn’t have a lot of pop flies. Hitting that meaty part of the ball is the best sound, so satisfying for these girls.”

“I get into a groove after a while,” Charles said. “I adjusted my bat path and I’m keeping my hands higher so I don’t dip, and I can be straight with the ball and have a smooth swing instead of being under and dumping and popping it up. If you don’t have a good bat path, you can’t really have a quality at-bat.”

And both players and coaches are capable of analyzing a problem and finding a solution, as Charles did recently when the need arose for an adjustment.

“I could not figure out what it was, and then I figured out that it was my hands not getting up far enough,” the sophomore explained. “They would go back, and then I would dip. But I finally figured it out, and my swing’s doing pretty good right now.”

Charles and Rily shared pitching duties, holding the Pirates to 5 singles and 1 double in the five-inning game. Lauver said the Trojans’ pitchers have shown an ability to work through situations before they become critical.

“They come in and get the job done, and they battle through any adversity they’re trying to overcome,” she said. “If it’s not looking right the first time, I know Ally for instance was like, I need to get a few more throws in because I’m not feeling like I’m ready just yet. She went back to the bullpen between innings, came back and did a great job.”

So while the hitting and pitching are progressing, the defense is another matter, and the team knows it.

“That’s the one thing we talked about,” Lauver said. “If we had to pick something that we need to continue working on immediately, it would be the amount of errors we had. We need to clean that up, and every single girl agreed. There were lots of head nods, like, yeah, we need to do better at that.

“Definitely, they’re coming out and busting their butt every single practice. I think they’re starting to understand the game better, how the ball travels, how they need to attack the ball, I think it’s coming together.”

But the way the season is going, perhaps it would be best not to get too comfortable. Even the schedule is being done on an almost impromptu basis. Take Monday.

“We were supposed to play Sunrise Mountain,” Lauver said. “About two hours before we were supposed to leave, I got a call that they didn’t have a team for whatever reason, but Las Vegas High School also had their game get canceled for some reason, so we ended up playing each other. It was fun to go out and see someone completely different.”

The result was a 13-1 win for the Trojans over the Wildcats, a school Pahrump Valley rarely plays in any sport.

Next up for the Trojans, who played Clark on Thursday in Las Vegas, is a visit to Mojave on Saturday. The next home game will be Tuesday when Desert Pines makes the trip to Pahrump. 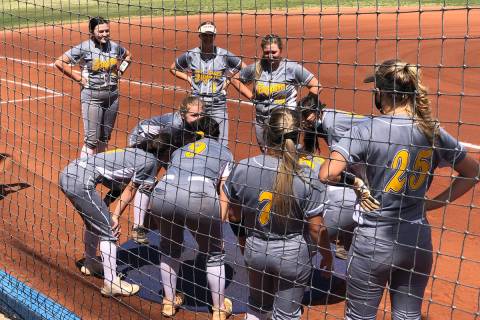