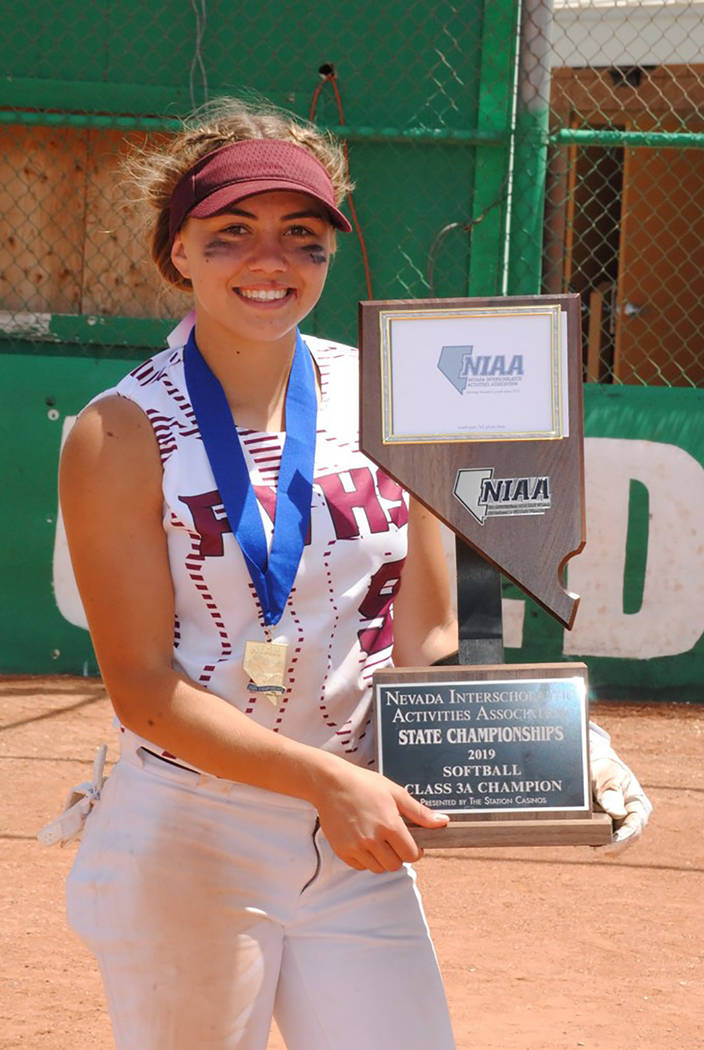 Cassondra Lauver/Special to the Pahrump Valley Times Pahrump Valley High School's Skyler Lauver holds the Class 3A championship trophy after the Trojans won their first state title in 14 years in May in Mesquite. 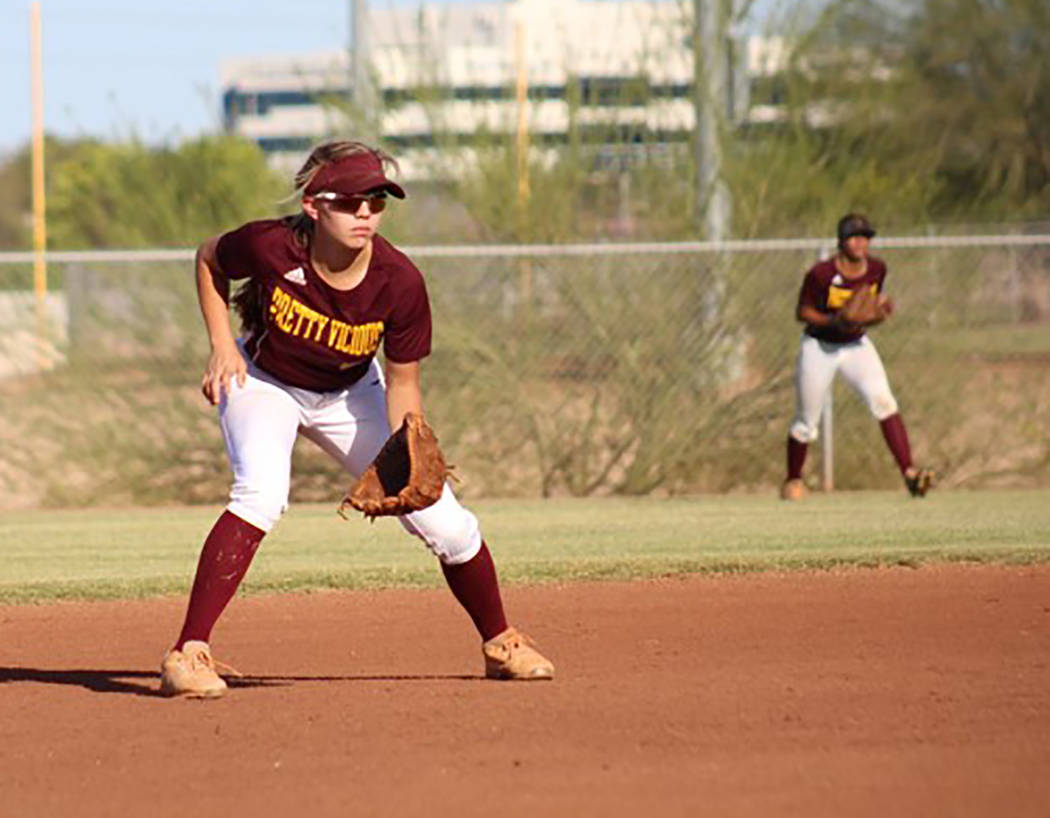 Cassondra Lauver/Special to the Pahrump Valley Times Skyler Lauver, left, at shortstop for the Pretty Vicious club team she played with for several years. Lauver has played with three Las Vegas-based her teams, including her current team, Impact Gold. 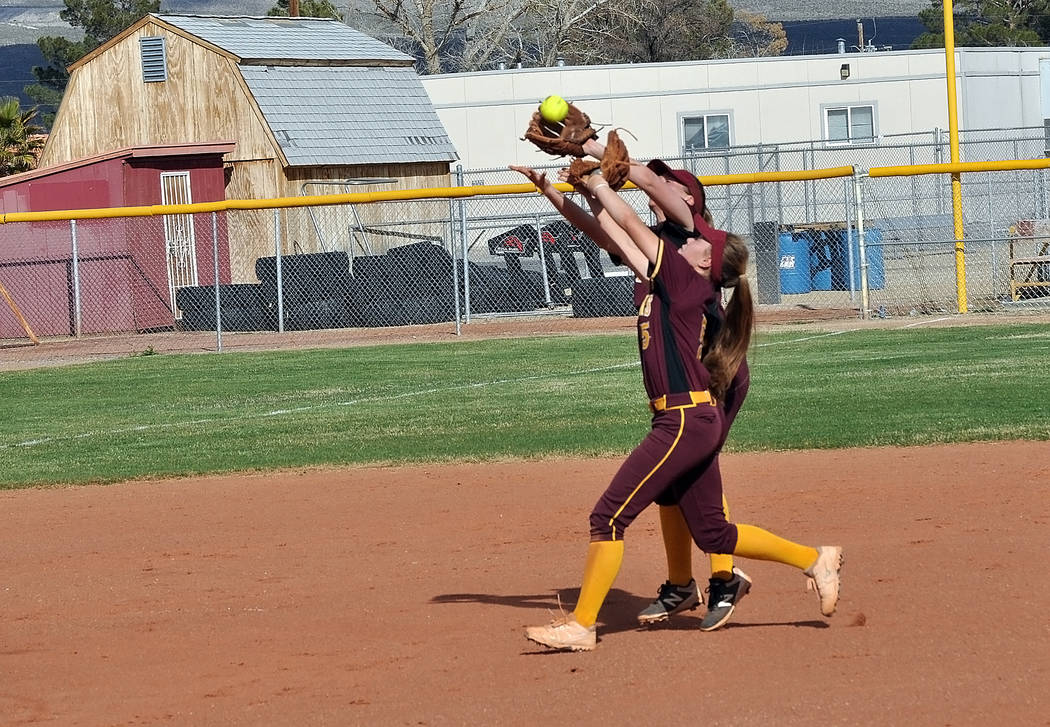 Horace Langford Jr./Pahrump Valley Times Pahrump Valley High School softball players Jackie Stobbe and Skyler Lauver nearly collide fielding a ball during a March 13 game in Pahrump. The two will be teammates again next year, as Lauver has accepted a full-ride offer to play softball at College of Southern Nevada.

The College of Southern Nevada’s softball program has established a recruiting pipeline into Pahrump.

“I got a full-ride offer from there,” Lauver said after her Impact Gold team won a game Tuesday night at Faith Lutheran High School in Las Vegas. “I’m going to be signing soon.”

CSN is not a softball power, going 16-31 last spring, including 14-22 to finish fourth in the six-team Scenic West Athletic Conference. But second-year coach Ashley Johnston seems to inspire confidence on the recruiting trail.

“I really like the coach,” Lauver said. “I get along with the coach really well. She’s really nice and she understands a lot of the things that I’m specifically working on. She was left-handed when she played, so there are things she knows that I need to fix that she can help me with.”

Presumably, that help is needed at the collegiate level, as Lauver has the high school game pretty much under control. Nevada Preps named her second-team all-state, the only player from a Class 3A school to be honored. But it was hard to ignore her .578 batting average with 9 doubles, 10 triples, 3 home runs, 49 RBIs and 63 runs. She finished with a .561 on-base percentage and slugged .875.

Class 3A coaches recognized her season by naming her the Sunset League co-MVP, the Southern Region most valuable player and first-team all-state.

One of those Class 3A coaches is her mother, Trojans coach Cassondra Lauver, who knows as well as anyone that Skyler’s success is no accident.

“She has been an outstanding leader on her team from the start,” Cassondra Lauver said. “Skyler is driven, dedicated and knows the game well. From battling to make a U12 all-star team in Pahrump to being selected as a regional MVP and all-state player multiple times, she is self-driven and an athlete built because of a work ethic and passion to improve.

With her pedigree, Skyler Lauver could have continued her softball career in a lot of places, but she approached the college selection process with an eye on the big picture.

“I really like the campus, but I also like the fact I’ll be close to home and the fact that I have my first two years paid for, and I’ll get extra money because I’m in-state with the Millennium Scholarship,” she said. “Financially, it’s the smartest thing to do, and in general I feel that it’s a really good fit for me.”

“Skyler has had multiple offers to play at the college level and has decided that CSN is a perfect fit for her,” Cassondra Lauver added. “She has a great connection with coach Johnston and believes in her vision of making CSN a softball powerhouse.”

“I know she’s trying to rebuild the program, and I think I can help with that,” she said of Johnston. “I feel like a lot of the people she’s been recruiting the past year are really good, and we’re going to get the program turned around.”

Cassondra Lauver has been Skyler’s coach for years, as her and husband Rich coached the Pretty Vicious travel team for several years. Skyler also has played for three Las Vegas-based teams, currently Impact Gold, a team that includes several of her Trojan teammates.

“She’s excited to still be growing as a player. a speedster, and slap-hitting at times,” Cassondra Lauver added. “She’s begun to practice that and you can expect to see it some in the upcoming season, although it’s not something she ever intended to do until coach Johnston shared her vision of what Skyler would become as a Coyote.

“Skyler has put her heart and soul into this game. She has loved the game and hated the game. But in her heart, this has been a dream of hers for years, and I am so excited for her and proud of her.”