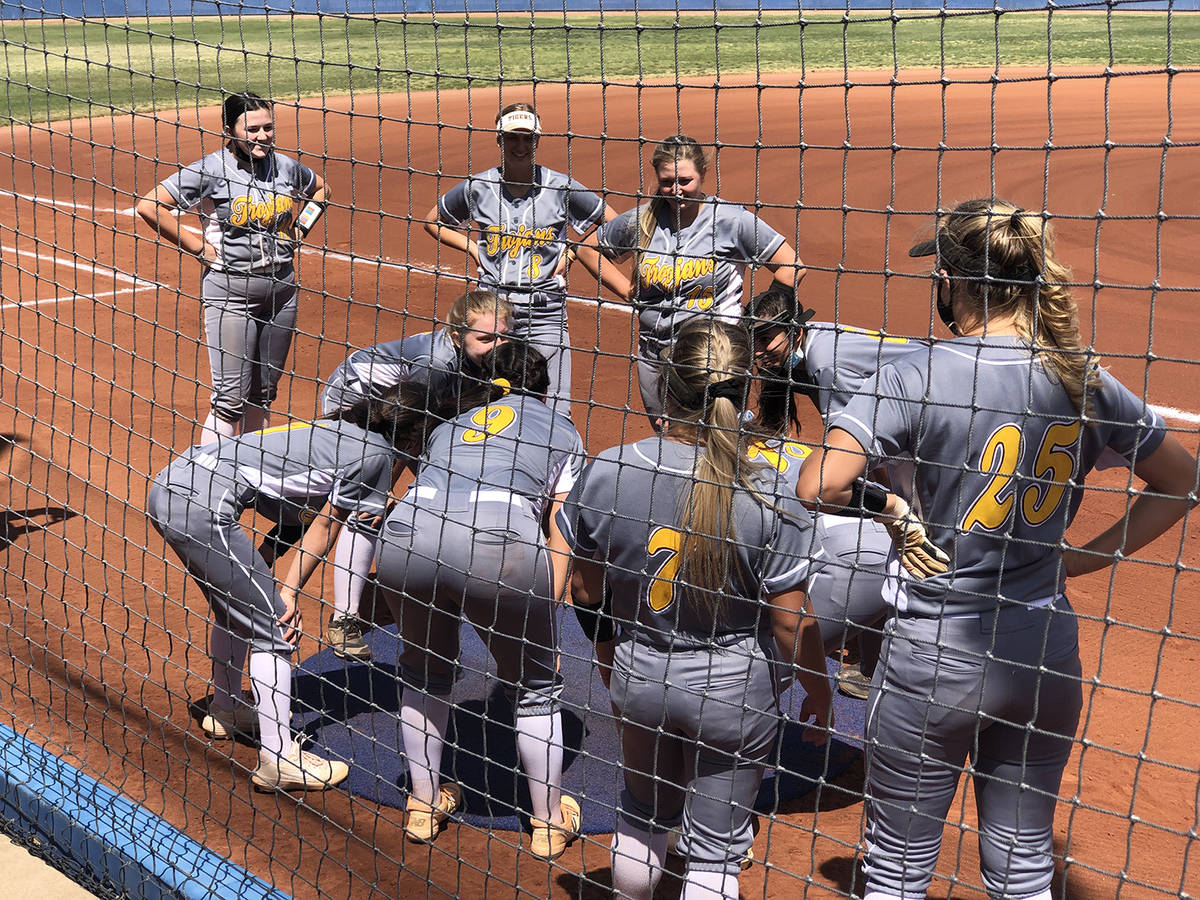 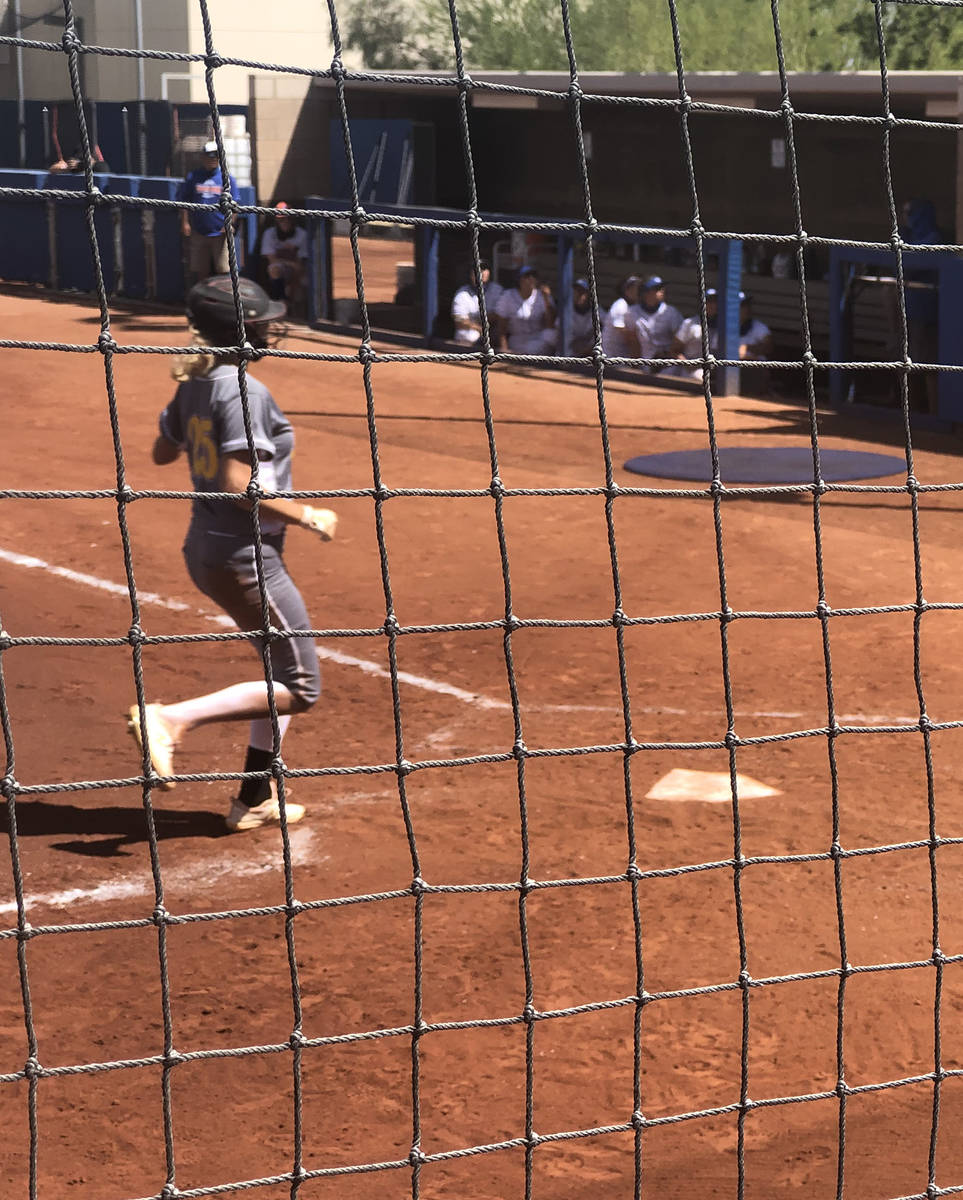 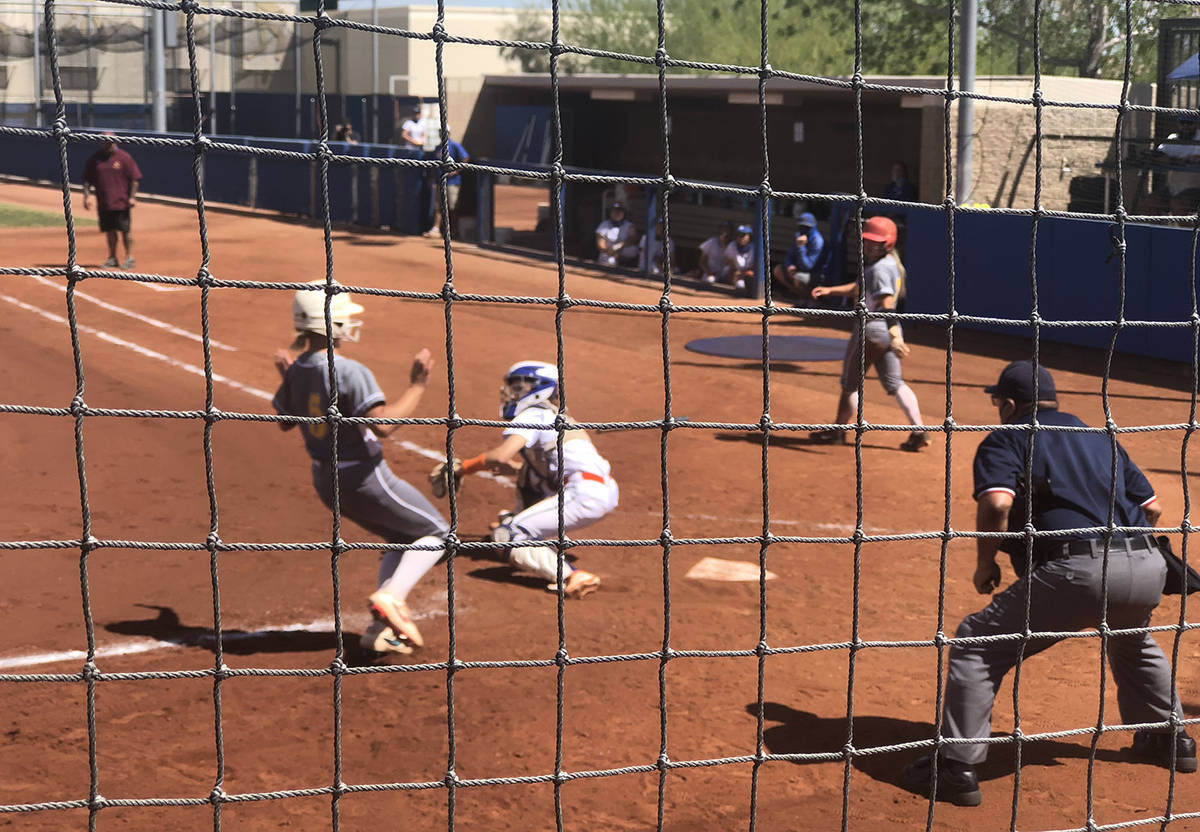 Tom Rysinski/Pahrump Valley Times Lizzie DeAngelis tries to score on a double by Ava Charles during the second inning of Saturday's 10-4 loss to Bishop Gorman. DeAngelis was out on the play.

Sure, both games were at Gorman, and the Trojans lost both of them. Other than that …

“When we got here in our circle after the game, I definitely think that you saw the demeanor of the team last Friday versus today, completely different,” Trojans coach Cassondra Lauver said after the 10-4 loss Saturday in Las Vegas. “The confidence level in the girls from last week to this week, completely different.”

The first game was a 15-5 Gaels win, a mercy rule ending after the Trojans had taken an early 5-0 lead. This time, the teams were basically even until Gorman coach Kevin Smith changed pitchers after a hit batter during the top of the fourth. The Trojans were on the receiving end of two hit batters and seven walks up courtesy of Gorman starter Sarah Aguilar.

But when Rylie Pindel replaced Aguilar, everything changed. A wild pitch on strike three to Haven Nelson allowed a run to score and cut the Gaels’ lead to 5-4, but after that the Trojans managed just two hits — a booming double in the sixth from Ava Charles, who went 3 for 3 with 2 doubles and an RBI, and a single by Allanah Coen that took a crazy hop over the head of the Gorman second baseman in the seventh.

“She’s their No. 1, and they started their No. 2 against us,” Lauver said. “She gets in there and does a good job. I don’t think we were intimidated by her at all. It was just working on our timing, making sure we’re getting up there to hit.”

Early on, they didn’t need to hit much. After the Gaels scored in the bottom of the first, the Trojans took a 3-1 lead in the second on a hit batter, a walk, a ground ball, a walk and Charles’ first double, which scored Ally Rily and almost scored Lizzie DeAngelis, but the Gaels executed a perfect relay throw to get DeAngelis at the plate.

That was a strong defensive play the Trojans matched in the fifth, when some outfield misadventures helped Gorman extend its lead to 8-4. But a perfect relay to Rily nailed Pindel — who doubled twice and drove in 3 runs — at the plate. Pindel’s 2-run double in the third gave Gorman a 4-3 lead.

Between Aguilar’s wildness and Pindel’s precision, the Trojans only had 5 hits to Gorman’s 13. DeAngelis drew a bases-loaded walk for the only Pahrump Valley RBI other than Charles’ double — Kalea Whitney scored on a wild pitch in the second and Dee Dee Egan scored on that missed third strike wild pitch on Pindel’s first batter — but the feel of the game was dramatically different from the one that took place on the same field eight days earlier.

“We are just making small steps forward every single day,” Lauver said. “I think the girls are learning a lot about themselves. I think they are becoming more confident and more educated about the game of softball.”