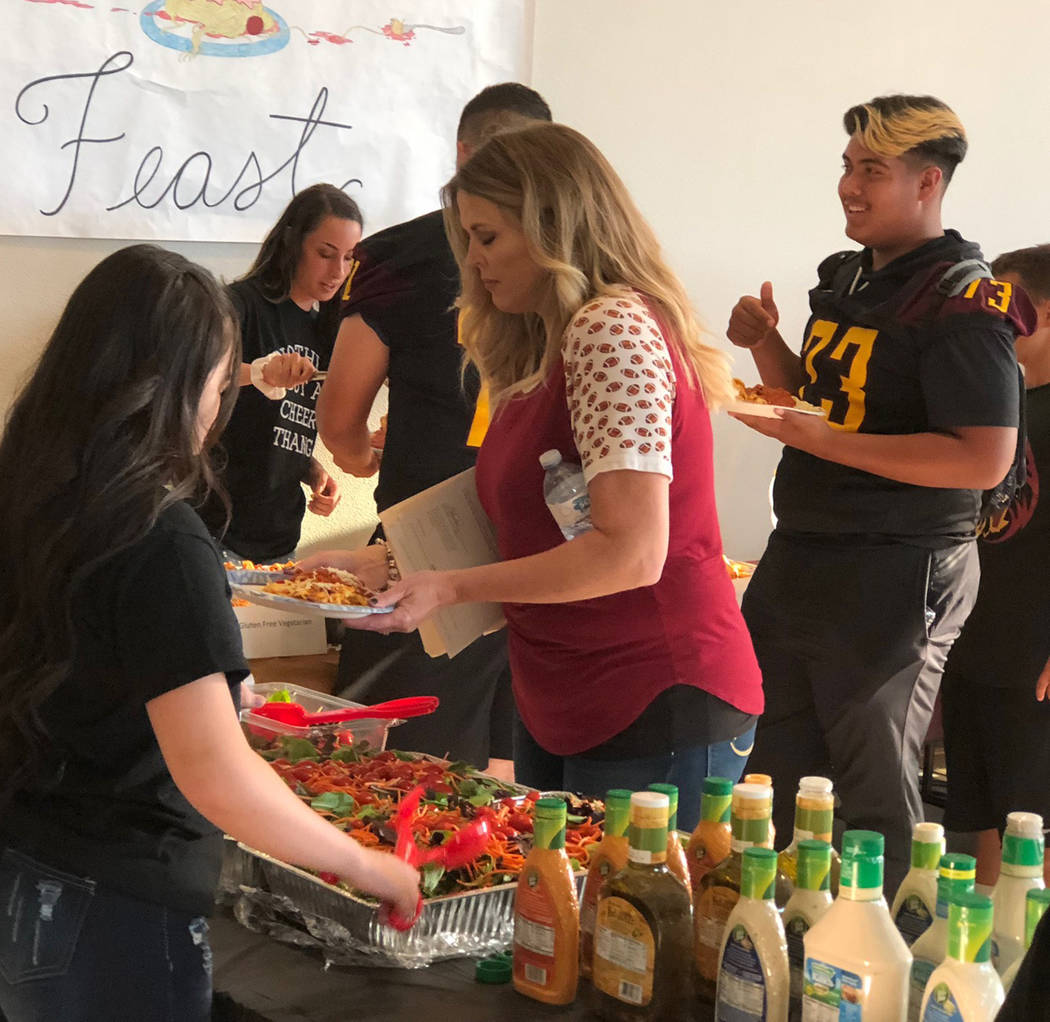 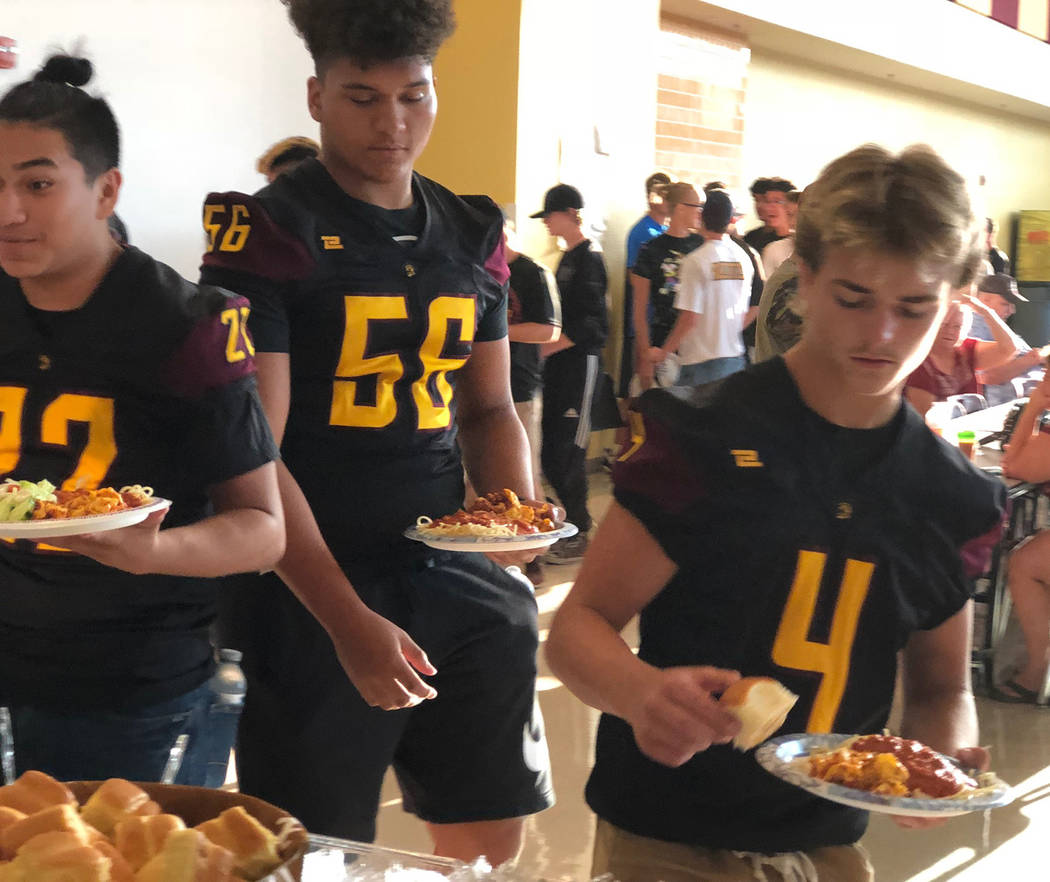 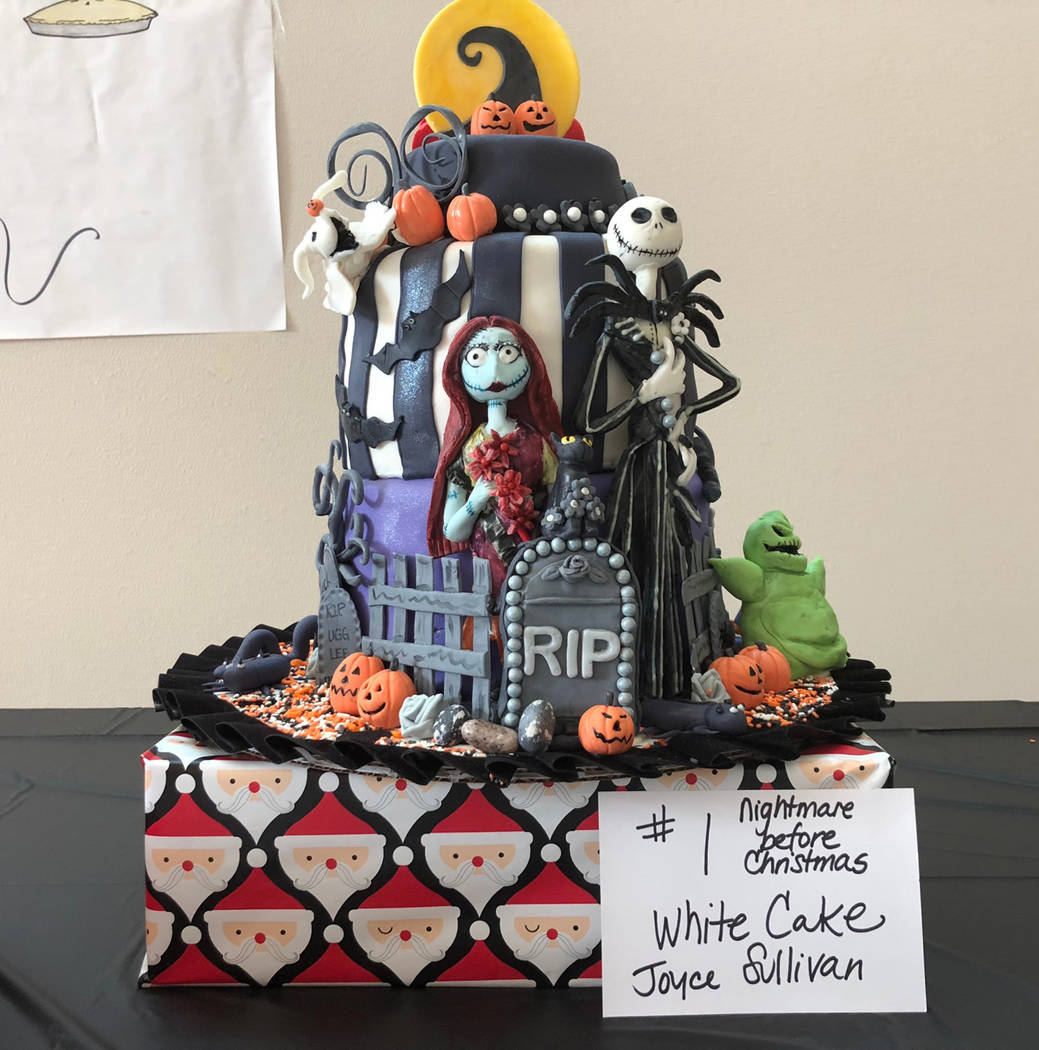 Tom Rysinski/Pahrump Valley Times Among the most elaborate cakes available at the 2018 Spaghetti Dinner & Bake Sale to benefit the Pahrump Valley High School football team was this "Nightmare Before Christmas" cake courtesy of Joyce Sullivan.

There aren’t many places where $5 gets you a spaghetti dinner and you can bring a dessert unannounced and have it auctioned for several hundred dollars.

With the Pahrump Valley High School team at camp at Southern Utah University, parents and supporters are gearing up for the annual Spaghetti Dinner and Bake Sale, coming up Aug. 3 in the high school cafeteria.

“We were just trying to find a way that we can raise money for the team without running fundraisers that go for weeks,” is how Holly Clayton explained how the event started.

And the one-night aspect of the fundraiser is a big plus to Joe Clayton, Holly’s husband and the Trojans’ seventh-year football coach.

“It allows us to not have to continue to fund-raise. These boys put so much time in their off-season training, and we want 100 percent of their focus to be on that training. We don’t want them to have to be knocking on doors.”

But they would have to knock on doors if the Spaghetti Dinner and Bake Sale wasn’t such a huge success. But it has been; last year, roughly 350 people bought tickets to the event and many of them eagerly bid on an array of cakes and other desserts. The event raised close to $10,000.

“What that fundraiser does for us is we don’t survive without it. Simple as that,” Joe Clayton said. “We’ve been self-sufficient because of that one fundraiser every year. We haven’t had to beg or borrow money from anybody. Everything from practice jerseys to our sleds, and now we’re talking about how our equipment is starting to get worn out and next year we might have to replace this or upgrade that.”

Properly equipping a football team is not exactly the same thing as getting a team ready to play basketball or volleyball.

“Football is kind of its own entity,” Joe Clayton said. “You’re not just talking about equipment that none of the other sports have to use, but you’re also talking about the numbers, when there’s 80 boys in your football program and you have to suit them all up from head to toe. That is covered by the school, however, because the school pays so much for the basic equipment just to play the sport, we have to fund everything else. The school can’t afford all of it.”

Luckily for the football team, there are dozens of people around who can afford to fork over serious cash for the privilege of sticking a fork in a cake, or cookies, or pie, or whatever somebody wants to bring to the school cafeteria.

“They can show up at the door with their items,” Holly Clayton said, noting no pre-registration was necessary. “I ask that people write a description of their dessert to give the auctioneer something to talk about. I encourage creative writing.”

“Tamara (Trudeau) has won it three years in a row, and she is out of town,” Holly Clayton said. Trudeau’s Reese’s Cake has drawn the high bid from Rick Marshall three years running, last year netting $1,000. With those titles up for grabs, Holly Clayton encouraged both professional and home bakers to bring something and see what happens.

“It’s very good advertising for people who bake cakes or have bakeries,” she said. “It’s not often you have a captive audience of 350 looking at your dessert. And the person who bids the highest amount will get the VIP experience. Joe and I will buy dinner and put them up in the crow’s nest for the homecoming game.”

A new twist this year is special prizes that will be attached to some of the desserts in a trial run sponsored by High Desert Water Systems.

“When you bid on a cake or cookies, you have a chance to win an extra prize,” Holly Clayton explained. “They’re just going to be small prizes and we’ll see how it goes, and we might expand on that next year.”

Expanding this year is the support of Pahrump’s Walmart, which responded quickly when Holly Clayton posted June 30 a list of items still needed for the event on the Pahrump Valley High School Football Facebook page, including 25 pounds of hamburger; 50 cans of spaghetti sauce; tomatoes, cucumbers and/or carrots to add to the salad mix; 400 dinner rolls; eight cases of water; and juice concentrate.

“A little shout-out for Walmart,” Joe Clayton said. “I just met with the new manager, Tyler, and he said whatever you need. He said I’ll give you everything you need for your spaghetti dinner. Just let me know. We always need certain items to fill it out, and Walmart’s now on board and 100 percent supporting us.”

This is obviously not a typical Sunday picnic, and it takes a lot of people to make it happen, both in the planning and in the execution.

“The cheerleading squad is coming, and there’s 22 cheerleaders. They will be serving again,” Holly Clayton said. “We’ll have Ski (Censke) and his auction team back again, I think there were eight of them last year. We’ll have our football players helping out and moms up there keeping track of what was donated and how much money is raised. There are at least 25 people besides cheerleaders that are helping keep things organized.”

Holly Clayton said she starts working on the dinner by the end of May, and the only things she hasn’t lined up for sure are enough chafing dishes and Sterno.

There’s not much doubt she’ll have them when the crowd starts filing in before 6 p.m. on Aug. 3.

“I’ve never seen a community that supports its youth programs like the local businesses here,” Joe Clayton said. “Like Don Trudeau (of Saitta Trudeau Chrysler Jeep Dodge), for example. Every year he lets us take two minivans up to SUU. It’s always, no problem, just let me know when you need them.

“The community support, the parental support, is second to none.”

Tickets for the Spaghetti Dinner and Bake Sale are $5 and can be purchased from any Pahrump Valley High School football player. The bake sale will follow dinner, and Holly Clayton said anyone is welcome to bring a dessert to be auctioned.

“Just show up at the door,” she said.