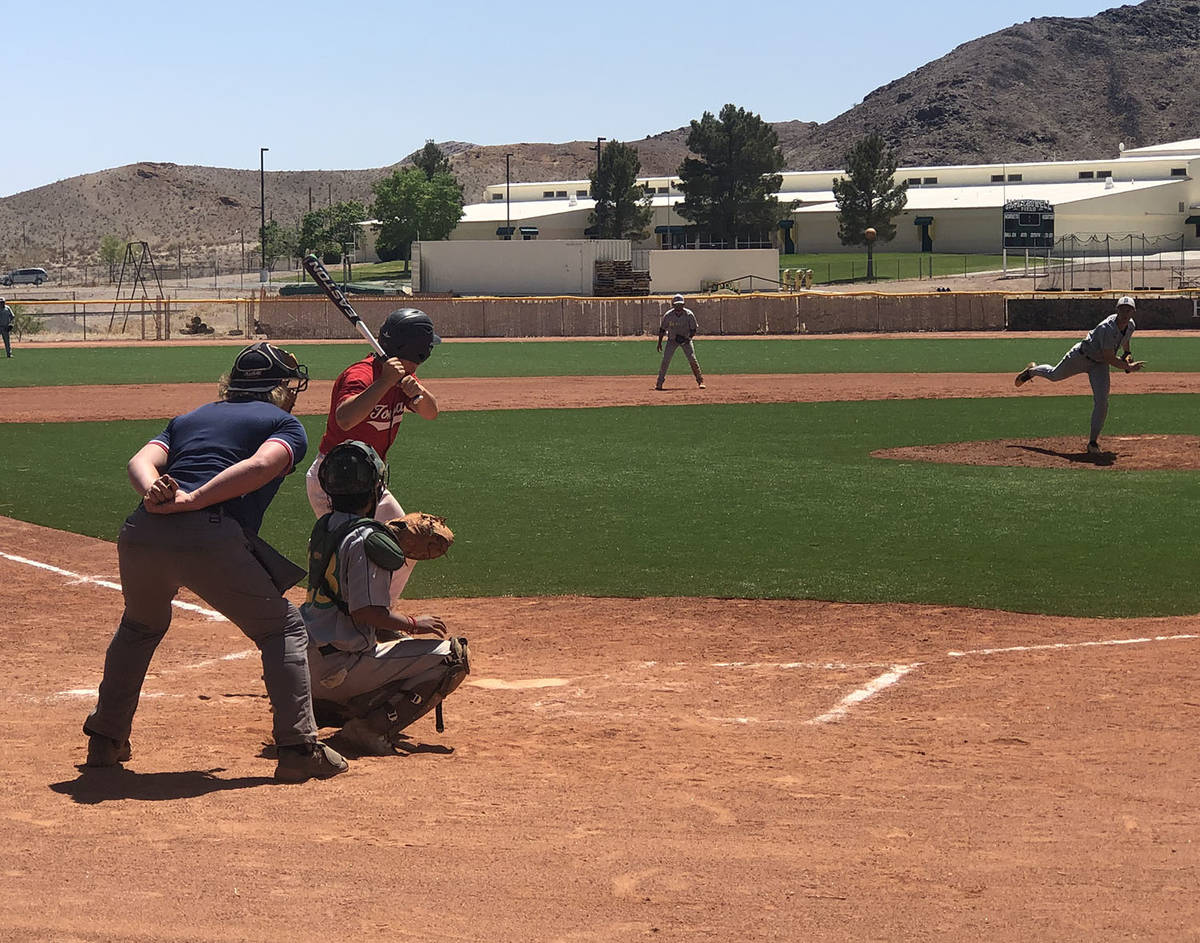 Tom Rysinski/Pahrump Valley Times Beatty High School senior Brayden Lynn pitches during the first game of a doubleheader against Tonopah on Friday, May 7, at Keith Koerner Memorial Field in Beatty. The Hornets dropped both games to the Muckers.

The Hornets (0-5) pushed across 11 runs in the bottom of the first inning of the opening game of their doubleheader against visiting Tonopah, taking an 11-5 lead. By the middle of the third inning, the lead was gone. By the end of the game, Beatty was on the wrong end of a 26-13 rout.

Game 2 was not nearly as chaotic, but again the Hornets took a lead on the Muckers. They led 4-2 after the third inning, 7-2 after the fourth and 9-5 after the fifth, but Tonopah erupted for 8 runs in the top of the sixth and went on to a 15-9 win to complete the sweep.

Moises Gonzalez highlighted the 11-run outburst in the opener, coming up with the bases loaded and one out and sending a ball into left field that was misplayed into a home run. Sem Sandoval, Liam Mossey and Oscar Lopez scored ahead of him for a 9-5 Beatty lead.

Alfonso Sandoval belted a 2-run triple and Shawn O’Dell singled in a run during the inning, while Gonzalez and Brayden Lynn each scored twice, for the Hornets, who took advantage of 4 errors, 3 wild pitches and a hit batter during the inning.

It didn’t go well from there, as 3 runs in the second and 4 in the third pulled the Muckers even at 12-12 before they coasted to the win.

But the Hornets rebounded in the second game, taking a 4-2 lead in the third thanks to an RBI triple by Alfonso Sandoval and run-scoring doubles by Ethan Mendoza and Mossey. The Hornets built the lead to 7-2, but again the Muckers came back, and an 8-run sixth settled the matter.

Virgin Valley 4, Pahrump Valley 0: Riley Price tossed a 1-hitter, striking out 10 without a walk, to pace the Bulldogs on Thursday in Mesquite.

Kalea Whitney had the only hit for the Trojans.

Ciara Stragand also hit 2 doubles for the Trojans, while Dee Dee Egan and Makayla Cadwell also had 3 hits apiece. Cadwell drove in 3 runs, while Stragand drove in 2. The top four batters in the order combined to go 11 for 11 with 12 runs, 3 doubles, a home run and 9 RBIs.

Pahrump Valley girls finished 1-2-3 in the shot put and the discus to highlight the Trojans’ efforts in a Friday meet at Durango High School in Las Vegas. Cheyenne and Pinecrest Academy Cadence also competed in the meet.

Sophomore Hunter Otteson won the discus with a throw of 99-3, classmate Ivan Crisler crossed the line first in the 300 hurdles in 47.6, and freshman River Cable’s 35-3 won the triple jump. All three marks are personal records.

The Hornets took on their Class 3A hosts as well as Class 4A Faith Lutheran and Las Vegas.