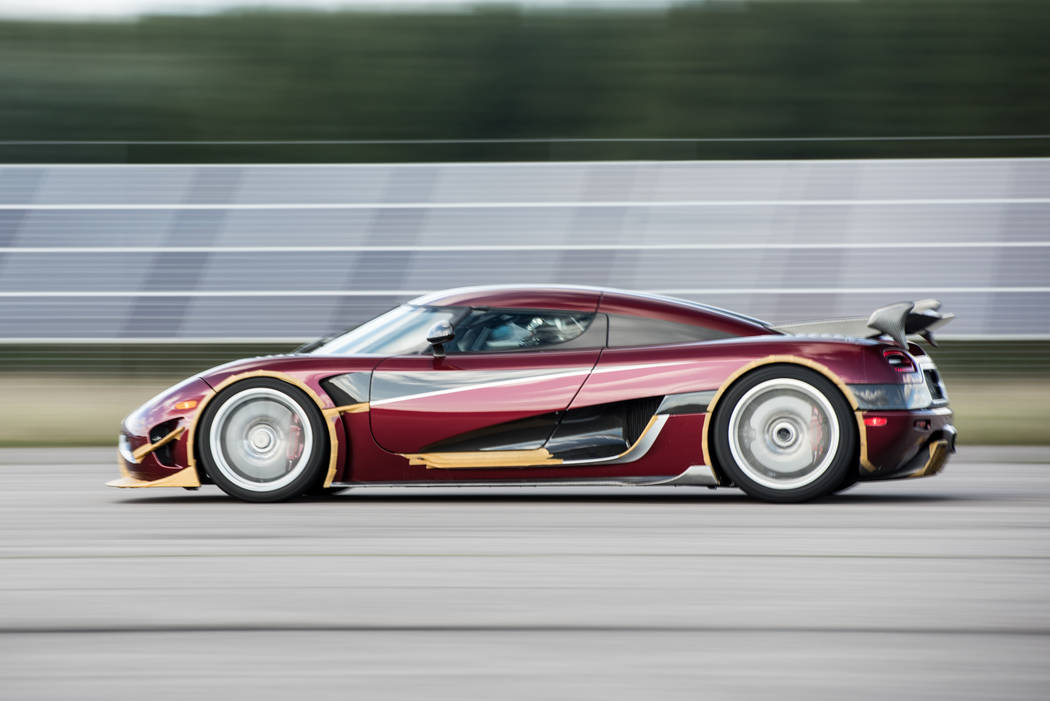 Special to the Pahrump Valley Times The car from Sweden will come to Pahrump to break two speed records on Nov. 4 at the Spring Mountain Motorsports Ranch. The Swedish car cost from anywhere from $1.5-$2.5 million to own. The event is being sponsored by Straight and Narrow LLC. Be aware sections of Highway 160 will be shut down on that day.

One of the fastest production cars in the world will be coming out to Pahrump to break two speed records on Nov. 4.

Spring Mountain Motorsports Ranch will be hosting a private event in which a Swedish car maker will be coming out to Pahrump to break the records.

Joel Oscarson, strategic development coordinator for Spring Mountain Motorsports Ranch, said “this will be one of the most exciting events ever attempted on Nevada’s highways.”

“We have received a temporary occupancy permit from the Nevada Department of Transportation to attempt a world speed record on a very straight section of highway, that is the main artery, connecting the rural community of Pahrump and Las Vegas together.”

He said traffic will be diverted for this event by NDOT and the highway will go down to one lane in both directions, an 11-mile stretch of southbound Nevada Highway 160 between Tecopa and Sandy Valley roads in Clark County from 7 a.m. until 3 p.m., Nov. 4.

“This attempt has been described as an outlandish attempt to dethrone an industry leader in speed records,” Oscarson said. “We believe the exact opposite and have great plans to not only beat the current record of 268 mph from a production vehicle but to hold that record for the foreseeable future.”

He said there are two records that will be broken that day, the first being the 240 mph on an open public highway and the other being the 268 mph record for the overall top speed of a production car. The price of the car ranges from $1.5 million to $2.5 million.

“I am confident that both records will be broken that day,” he said. “This will be the first time that they have been able to attempt to break the record because they never could get an open highway long enough to do this.”

Oscarson said this event has been in the planning stages for about a year now.

“The Swedish car company is a member of our club and this event will be costing them around $100,000 to shut down the highway and all the logistics, insurance and other things that went into this event,”Oscarson said. “We have been working closely with them as a liaison to help them organize this event and the event is being put on by Straight and Narrow LLC, who are also members of our club.”

He said to see this event one has to be invited.

“To get to the site where the records will be broken, one has to be accompanied by Spring Mountain Motorsports personnel,” Oscarson said.

The event is planned at Spring Mountain Motorsports Ranch from 10 a.m. to 3 p.m. on Nov. 4.

“We will make multiple attempts throughout the day and will be providing shuttle service to and from the staging area and back to Spring Mountain motor resort,” he said.

In addition, Oscarson said that they have organized a production company that will film and release the production to the general public at a later date .