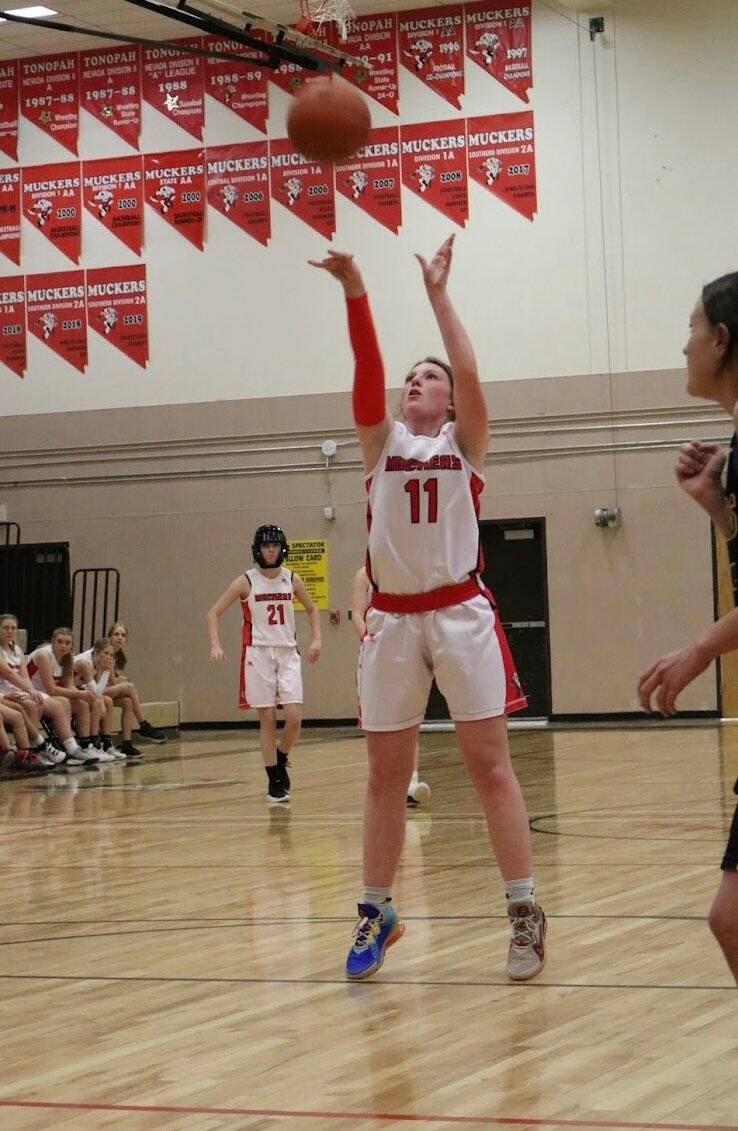 Tonopah Muckers guard Jessica Callaway (11) attempts a free throw during a game earlier this season. (Special to the Times-Bonanza) 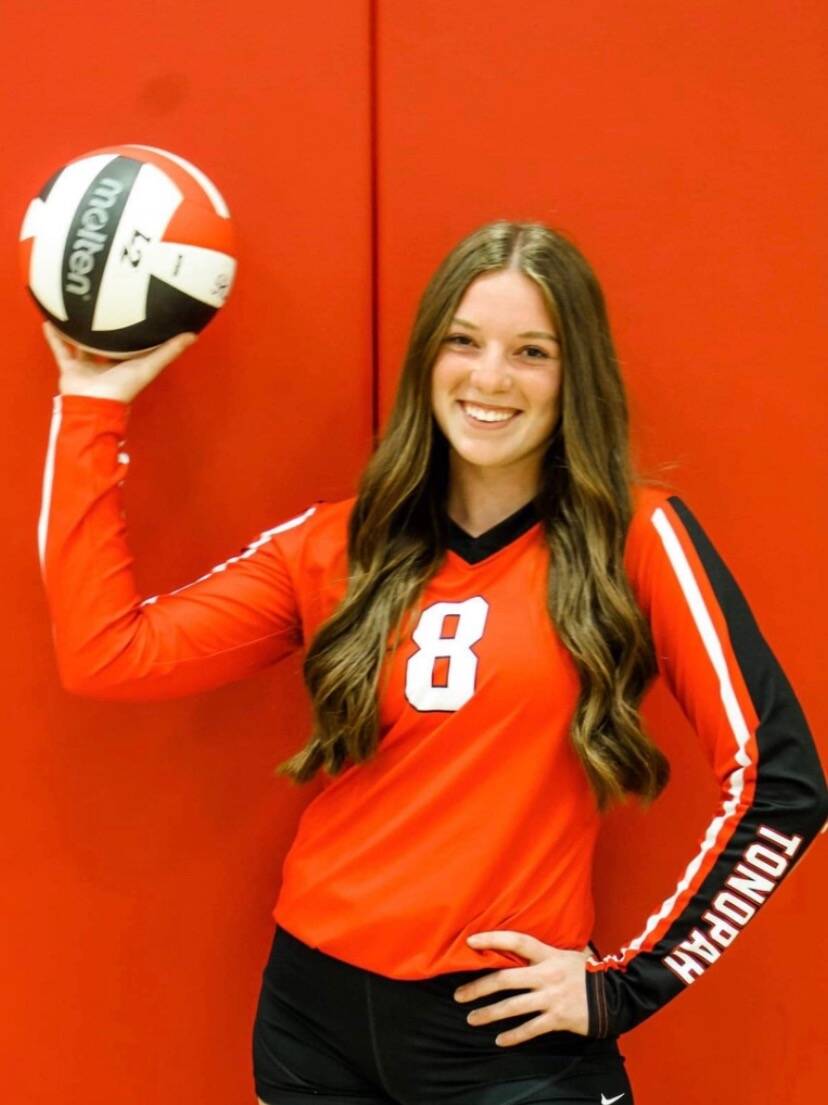 Tonopah High School senior Jessica Callaway (8) poses for her volleyball picture during her senior season in 2022. (Special to the Times-Bonanza)

From the Midwest to central Nevada, small towns have always been the way of life for this Tonopah High School senior.

Callaway’s family decided to move to the Tonopah area because her aunt was living there. The Callaways liked the area and decided to stay here permanently.

“There’s less opportunities for a few things, but I like living in small towns,” Callaway said.

Callaway is a three-sport athlete for Tonopah High School. She is a member of the varsity volleyball, varsity basketball and varsity softball teams.

She initially got into playing volleyball during her sixth-grade year so that she could play with her friends. Now, after being a four-year player on the school’s varsity team, she recognizes that she plays for her teammates and knows that they can rely on her and vice versa.

“It was really nerve-wracking at first,” Callaway said of making the varsity team her freshman year. “That first game was anxiety through the roof, but I got used to it and got more experience, and that ended up helping me throughout my entire high school career.”

Callaway mentioned that playing with people who were better than her helped her grow and become a better player.

The seniors helped Callaway a lot early in her career. They would be there for her when she got down about messing up on a play or they helped her if she was going about a play or situation wrong.

To this day, Callaway tries to do these same things for the younger players on the team.

“I just really remembered what my seniors were like,” Callaway said. “I try to help the people that are younger than me to kind of develop the team that was with me.”

This past fall, the Tonopah girls volleyball team won their league championship and made it to the state semifinals.

After defeating one of their main rivals in Pahranagat Valley High School, Callaway said that she and the team felt like they made the town of Tonopah proud.

Even though she started playing basketball in middle school, it wasn’t until high school that Callaway started watching professional basketball games on TV.

“I started watching it my freshman year,” Callaway said. “I didn’t really care about it too much before then. Sometimes in class, if we weren’t doing anything, I would pull up a game.”

“Occasionally, I still do,” she said with laughter.

While Callaway was on the JV team, she learned a lot from watching the varsity team play. She would watch the seniors on the team and how their attitudes were while they were on the court.

As a senior this year, Callaway finished as the second leading scorer on the team and was one of the leaders of the team.

She mentioned that being a leader came with some pressure but that it has helped her be a better role model for the younger players.

In the spring,Callaway plays her third and final sport for the Muckers.

Callaway’s main position in softball is as a pitcher. When she isn’t pitching, her secondary position is shortstop.

Her pitching career didn’t get off to a good start as she struggled in her first big tournament, but Callaway knew that she needed to put the work in to get better and began staying late after practice to get some extra pitches in and become a better player.

She’ll be going out for the team one final time this year when the spring season rolls around in March.

When Callaway isn’t playing sports for her high school, she enjoys playing the ukulele and hanging out with her friends.

“I just asked for it for Christmas one year,” Callaway said of her start with the ukulele. “I ended up being pretty good at it.”

She’s been playing the instrument for about two or three years now. The first song that she learned how to play was a version of “I’m Yours”.

For those of you who may not know what the ukulele is, imagine a miniature version of a guitar.

Although I’m sure there are others, I think Callaway may be the first teenager I’ve met that plays the ukulele. Most teenagers usually play the guitar, don’t they? But more power to her!

After high school Callaway plans to attend college at the College of Southern Idaho in Twin Falls. Her goal is to graduate with a business entrepreneurial degree because she hopes to one day open her own business.