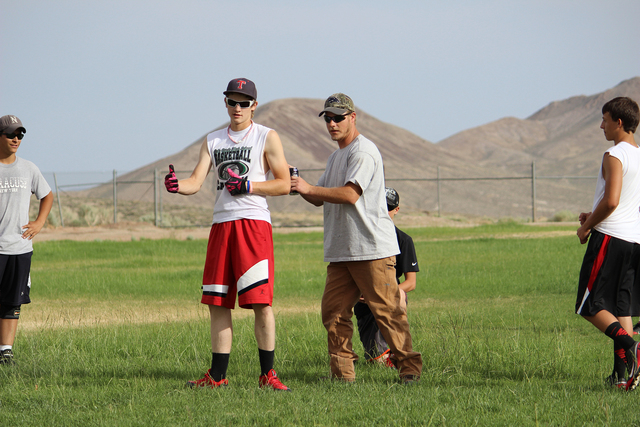 The upcoming Sam Stringer Memorial on July 19 will see many IMCA Modified drivers converging on Pahrump to try to win the $1,500 purse. This could mean the six to 10 IMCA Modifieds from Tonopah could be coming down.

Three of those racers coach football for the Tonopah High School football team and said they are ready for the big race.

These coaches take it to the next level and regularly blow off steam at the local Tonopah Speedway. The racers/coaches are Duffy Otteson, James Thibodeaux and Steve Stringer.

Steve Stringer, the oldest son of Sam Stringer, used to drive a West Coast Super Stock car. It was the last car his father raced before cancer took his life almost three years ago, but it was not the only car Sam drove. In addition to coaching, Steve teaches at the elementary school in Tonopah.

Steve said Thibodeaux got to talking about the strengths of racing Modifieds and after thinking about it all three ended up racing Modifieds this season. Steve and Otteson decided to leave the Super Stock class because of what they perceived as a dying class. The Super Stock numbers have been dwindling and the IMCA Modified Class has been growing in Tonopah.

“My father did drive Modifieds. The Sam Stringer Memorial was centered on the Super Stocks because that is what he was known for the last part of his life, but the class has died. We changed the cars for the race to the IMCA Modifieds,” Steve told the PVT.

“The season is still young. We just concentrate on doing the Tonopah Speedway and all three of us will try to come down for the Sam Stringer Memorial race in Pahrump,” he said.

Otteson said this was his first year racing IMCA Modifieds.

“I switched over to a modified because it is good competition and more cars. Plus I can race all over the place and be legal,” he said.

Otteson also wants to race in the Stringer Memorial. Otteson had done Super Stocks for the past two seasons.

Steve said it is a friendly competition between the three of them and they all just love to race.

“We are all pretty good friends. Duffy bought his car in December and it was just a frame. I spent a lot of late nights over at Duffy’s getting his car together. I helped him with some updates to the car. I have also helped James too and in return they have all helped me when I have needed a hand,” Steve remarked.

All three love racing the IMCA Modifieds because the car is so unpredictable.

“IMCA Modifieds have anywhere from 400 horsepower to 700 horsepower. The cars have very little restrictions to the engines. You can’t have aluminum heads, they must be steel. They also limit you on the type of camshaft you can have,” Steve said.

The IMCA class is a lot about driving skills and not about how much you spend on your car,” he emphasized.

“Most super Stocks are flat. The Super Stocks limit the suspension and the Modifieds tend to be more of a handful and are harder to control,” Steve explained.

To get into the IMCA Modified class can be a costly endeavor.

People have started in Modifieds without racing in other classes like Mini Stocks. To get into Modifieds, you can easily spend over $10,000.

“I bought mine with a rolling chassis minus the motor. An engine could cost about $5,000. I do all the maintenance on the car. This was the first time I ever did any motor work myself. I wanted to save some money,” Steve said.

Steve said he would love to have his name on the Trophy for the Sam Stringer Memorial.