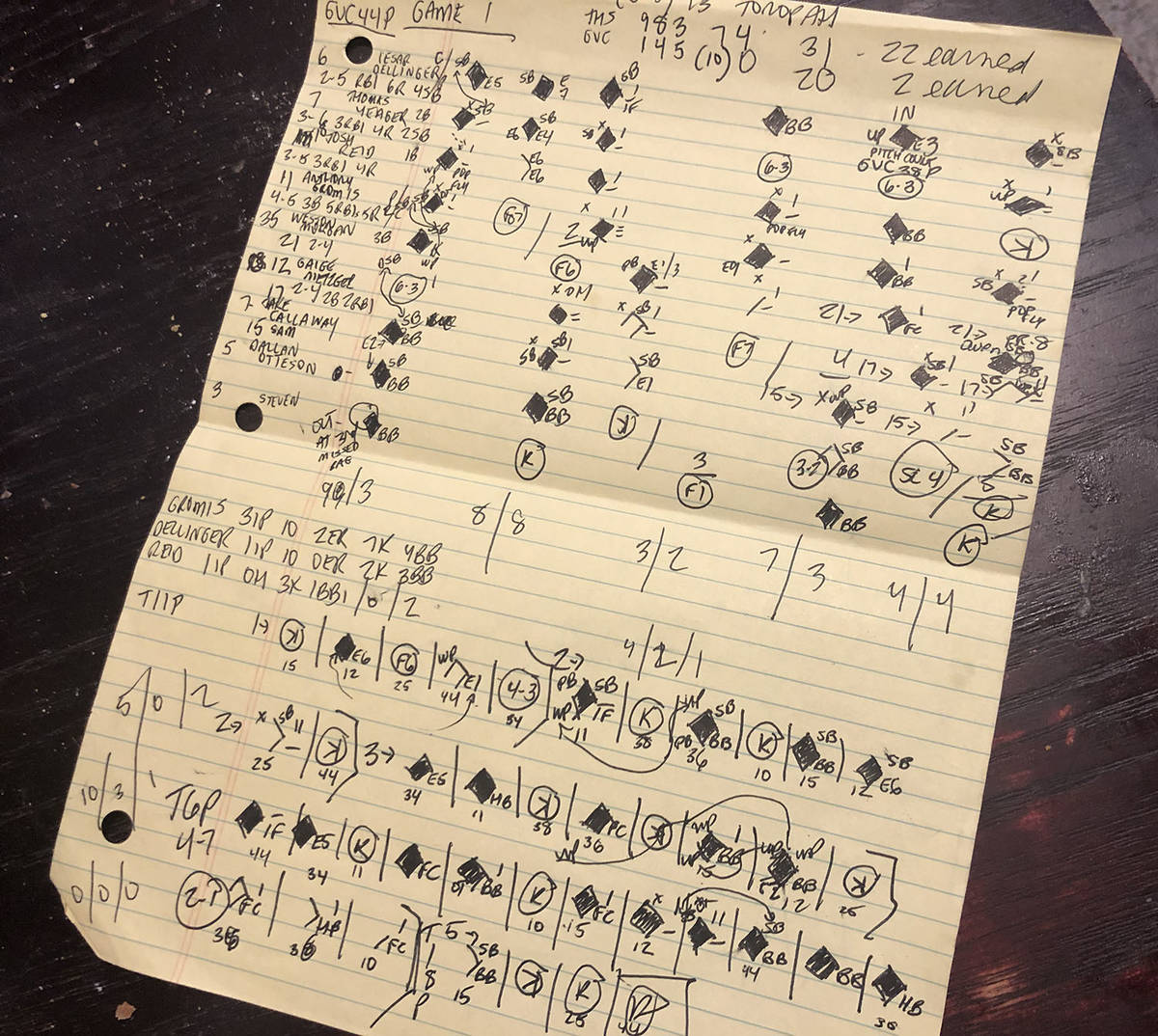 Tom Rysinski/Pahrump Valley Times Is it an inkblot from a Rorschach test? Is it a crime scene after it was sprayed with luminol? No, it's a scorecard from a recent baseball game in which 51 runs were scored, some earned. 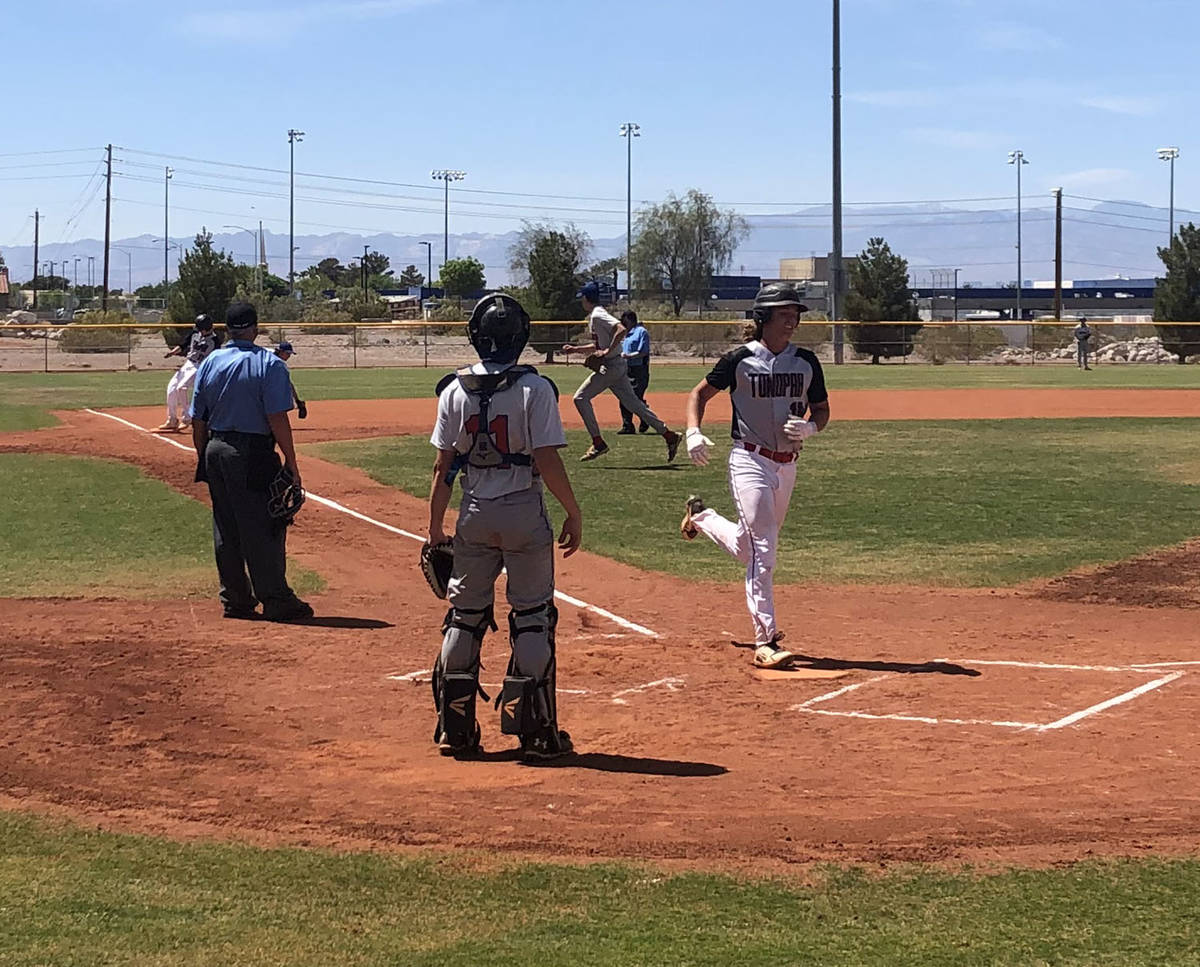 Tom Rysinski/Pahrump Valley Times Scoring a run is one of the few statistics you can trust from online box scores, as almost everything else is a matter of opinion.

The words were loud and clear from the announcer at Virgin Valley High School, although I assumed they were planning a blooper reel.

It was 2019, and the Pahrump Valley High School softball team was competing in the Class 3A State Tournament. I have two memories from that tournament: Kaden Cable’s game-winning home run in extra innings to beat Fernley, and, “Base hit! RBI!”

Look, I’ll admit I don’t handle stupidity well, ignorance less so. I hold my tongue a lot, partly because I don’t want to cause any trouble and partly because it’s usually not going to do any good anyway.

This was the situation: A batter came up with a runner on first. She hits a routine, little-effort-required comebacker. The pitcher fields the ball cleanly but then sails her throw to first well down the line in right field. The batter winds up on second, and the runner on first comes around to score.

Look, I’m sure the announcer is a very nice person who is good to her kids, grandkids, great-grandkids and great-great-grandkids (OK, I might be guessing on those last two), but she had no business being at the mike of a state championship game. Is it that hard to find someone who knows anything about the game to do that? Everything should be first-rate around a state tournament, from the playing field and the umpires on down.

I was reminded of “Base hit! RBI!” last week when I was comparing box scores from a couple of games. There is no way to do this job well without relying on websites for scores and statistics; after all, I have four high schools to follow with multiple teams at each one, several who insist on playing games in faraway places. Heck, home games are at faraway places for me.

My time card is mythological enough — and my mileage report all too real — without trying to get to every game. But on this day I was looking at box scores of a game I attended, just out of curiosity. And I confirmed what I already knew: Don’t believe everything you read or hear.

I’m not talking about anything totally absurd, like the government is going to ban hamburgers or something equally ridiculous, just simple box scores. Between NevadaPreps, MaxPreps and GameChanger, there are a lot of box scores out there.

Sadly, the old GIGO acronym applies equally well to online box scores: Garbage In, Garbage Out. This usually manifests itself in what is a hit and what is an error, but when you realize RBIs are tied to hits vs. errors, and then realize that runners are getting credit for stolen bases on wild pitches and passed balls, and a single and an error turns into a triple, you also realize that, aside from things such as strikeouts and the final score — one hopes — nothing can be trusted.

I consider myself a proud graduate of the Roy Uyeno School of Baseball Scoring. The curriculum is simple: It’s an error.

Anyway, it was a game I attended, and I scored it myself. I score every game I go to, and my pad often becomes a mess.

But when I put statistics in the paper from a game I covered, you can believe everything you read. Or at least you should. I have plenty of flaws, but I am obsessed with statistics.

Anyway, the game was played on a hot Friday afternoon, which is no excuse for this silliness. We’ll start simple: hits. The winning team had 20 hits on one website, 30 on the other. Seriously, a difference of TEN HITS. Miraculously, I had 20 as well.

Errors? Site one read 10. Site two read zero. Have you ever watched high school baseball? Zero errors, even for a good team, is cause for either celebration or an investigation. With small schools, it’s almost always the latter.

Clearly, scoring a run is so obvious everyone had it right. Rah!

So why am I telling you this? Well, partly because it’s 4 a.m. and I need to fill space. But also because there will come a time when you or your son or your daughter has statistics that don’t match up with statistics from another source.

Don’t worry about it.

Just keep all of this in mind when you check box scores online. And please don’t worry about anyone being shortchanged. If a kid is good enough to play at the next level, he or she will get noticed. If not, who really cares about anything other than the final score?