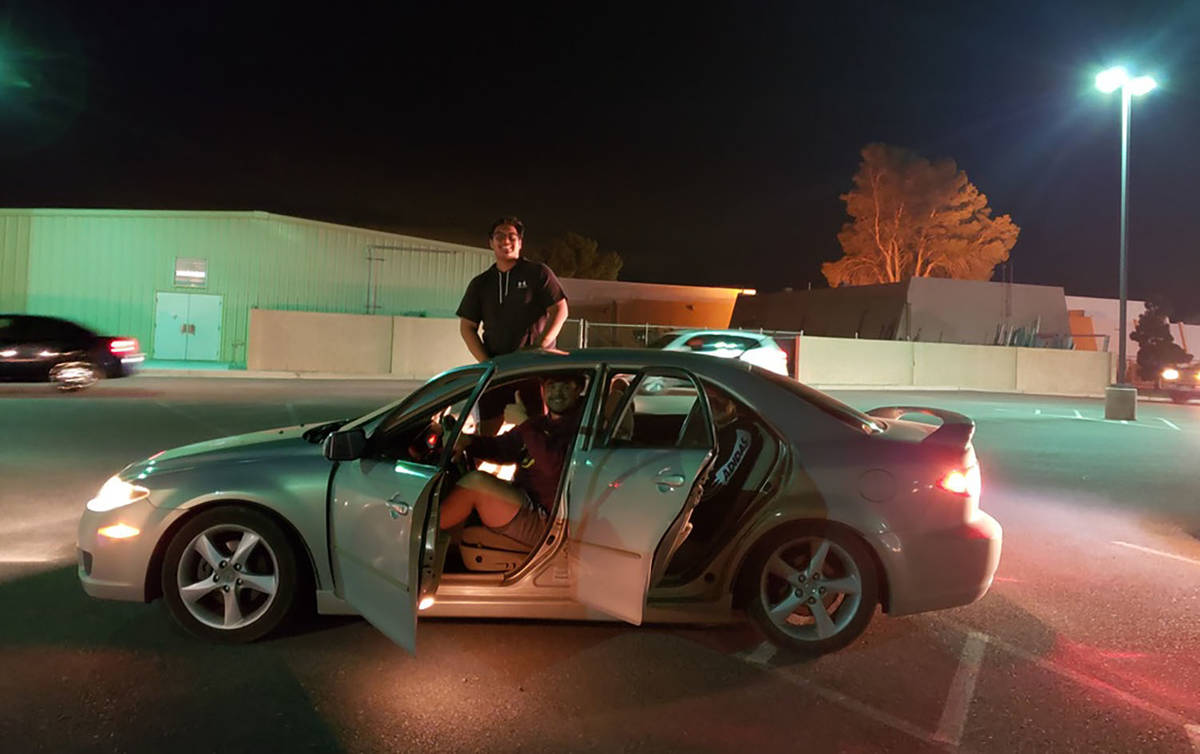 Special to the Pahrump Valley Times Pahrump Valley High School students, parents and supporters gathered April 17 at the school for the #BeALight project, which lit up the lights of Trojan Field for 20 minutes at 20:20 in honor of the Class of 2020. 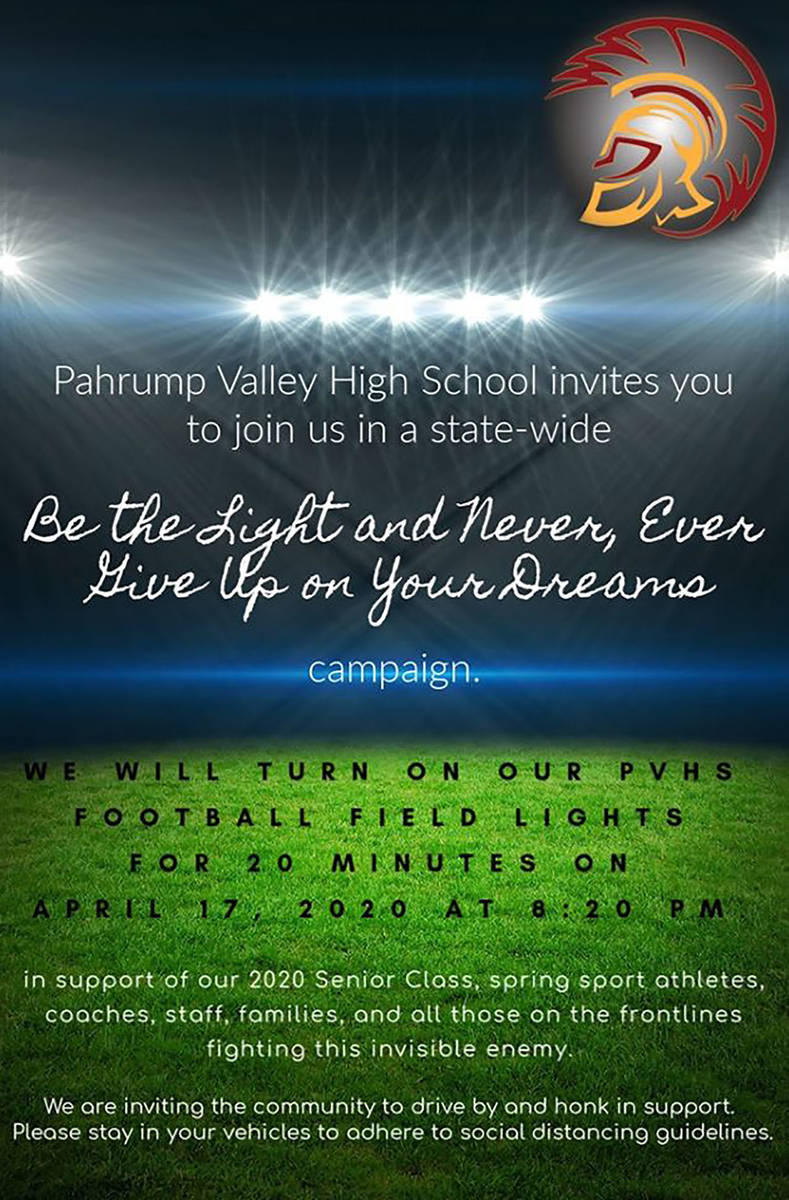 Special to the Pahrump Valley Times Pahrump Valley High School extended an invitation to join in a 20-minute tribute to the Class of 2020, spring sports athletes, coaches, staff, families and those on the front lines of the fight against COVID-19.

Today is May 1, best known by some of us for those parades in Moscow’s Red Square honoring “International Workers’ Day” during the Communist era.

Fun fact: Did you know that May Day as a holiday to honor labor is rooted in the United States? The date was picked to commemorate the Haymarket affair, a deadly event generally considered one of the watershed moments in the history of the labor movement which happened May 4, 1886 in Chicago. The conference called for the “legal establishment of the 8-hour day, for the class demands of the proletariat and for universal peace.”

One out of three ain’t bad, I guess.

But May 1 has another meaning in local sports, at least this year. May 1 was supposed to be the last day of the regular season for spring sports. And it was going to be a busy one.

Glancing at the schedule, I likely would have been in Beatty for a baseball doubleheader against Green Valley Christian. Pahrump Valley’s softball and baseball teams were slated to be at Bonanza, Tonopah baseball was scheduled to be in Carlin, Round Mountain baseball was supposed to be at Spring Mountain while the softball team played at home against Sandy Valley, and the track and field teams from Pahrump Valley, Beatty and Tonopah were going to be in Boulder City for the Small Schools Invitational.

As I said, a busy day, with regionals starting May 5 for baseball and softball and May 8 for track.

With all of that gone, some folks got the idea of finding a way to pay tribute to those whose seasons were lost while simultaneously expressing hope and optimism that the games soon would return.

Let’s put this on the table right up front: Cheap symbolism, empty gestures and sappy crap generally hold little interest for me. I’m much more interested in the tangible, and symbolic gestures better mean something important.

The #BeALight idea is one such thing. Tonopah High School and Pahrump Valley High School each held a night in which the lights of the football stadium were lit and residents were urged to drive by, honking horns in support of this year’s seniors, who had their spring sports season obliterated by a virus.

Karissa Niehoff, the executive director of the National Federation of State High School Associations — the Indiana-based outfit that governs competition for most high school sports and activities in the United States — made note of the development in an open letter in April.

Seniors in this year’s class, however, will be among the toughest graduates ever as their lives have been the bookends to two of the worst tragedies in our nation’s history,” Niehoff wrote. “Born sometime during the 2001-02 school year, which began with the horrific events of September 11, 2001, these resilient 2020 graduates had an abrupt ending to their high school days with the ongoing national health crisis.

“Understanding their disappointment of not getting to compete this spring, people from coast to coast are expressing their support for these high school students. With an idea apparently born in Texas, further developed in Colorado and supported by many others during the past several weeks, lights at high school stadiums throughout the country have been brightening the night skies. The #BeALight hashtag accompanies post after post of schools participating in this recognition of seniors who are missing their final season of high school sports or performing arts.”

Turnout was strong enough at Pahrump Valley High School that George Campnell, the school’s principal, was compelled to post about it on Facebook.

“PVHS would like to thank the hundreds of community members who came to the BE The Light event,” Campnell wrote. “Your support was amazing, and I was touched by one of the most inspirational events I have attended in my 28-year educational career journey.”

The event was such a success there and around the country that Niehoff thought it should happen more often.

“These lights have been turned on to say thanks to those seniors and to let them know they will be missed,” she wrote. “Their contributions to high school activity programs will be remembered forever, and the benefits they received will guide them throughout their chosen careers.

“Electric bills notwithstanding, perhaps these lights can burn for 20 minutes every night until the games return later this year. The lights signify hope – a hope that these lights will burn again this fall to showcase high school sports and performing arts.”

A nice sentiment, but how many nights do you think people are going to show up? Every night would get tedious and meaningless pretty quickly. There are other things to do, and even other people getting honored with remain-in-your-car parade-style tributes.

But how about once each week? What would be more symbolic, and more of a symbol of hope that things get back to normal in time for the new school year, than having 20 minutes of Friday night lights each week? Considering how few lights have been on since schools were shut down, certainly 20 minutes of stadium lights would not do much damage to the electric bills, Niehoff noted.

And the hope those lights would symbolize might be even more important than we realize. Much like independent businesses will have a harder time surviving this current mess than large chains, some organizations that offer opportunities to play sports might also struggle financially.

“With the loss of many nonschool and club sport opportunities due to financial issues, high school sports and performing arts could fill an even larger void in the lives of our nation’s youth,” Niehoff wrote. “And we look forward to that time ahead when student-athletes are on the field and fans are in the stands.”

Now, Niehoff is also the chief propagandist for what she always refers to as “education-based athletic programs.” May I translate? “Play for that gym teacher and not the English guy at that club with 30 years of experience doing nothing but coaching soccer or you are a bad person. And so is your momma.”

Or something like that. (Pahrump Valley happens to have two very fine soccer coaches whom I like personally and respect professionally; I meant that sentence generically. So don’t try to stir up anything.)

But Niehoff might be right, at least temporarily, in this case. And if school sports and activities are going to play an even larger role than we think in returning us to “normal,” whatever that will be, then turn on the lights and let’s get karma on our side.

Nothing wrong with a good symbolic gesture once in a while.