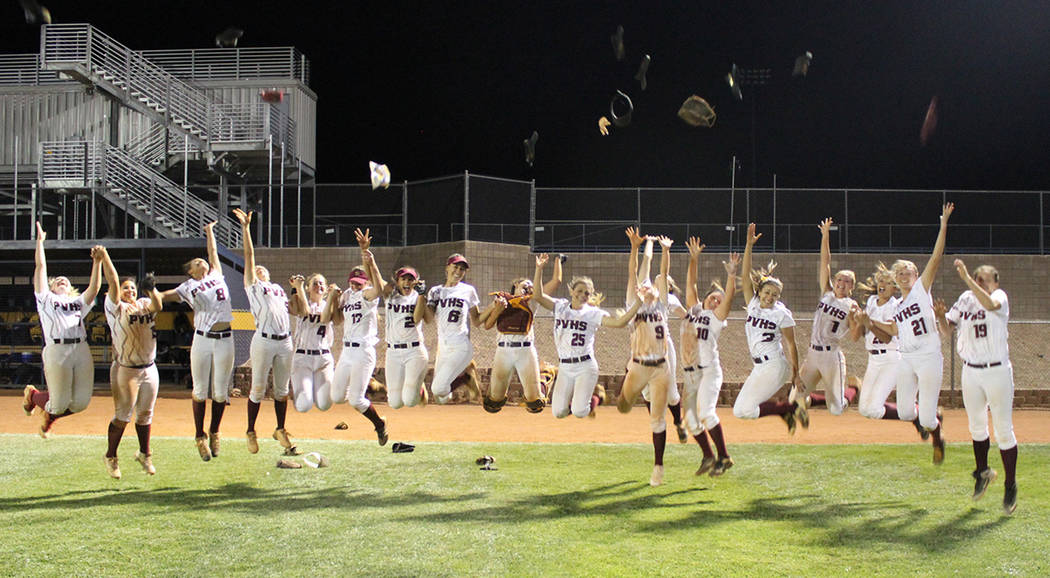 Cassondra Lauver/Special to the Pahrump Valley Times Pahrump Valley High School softball players celebrate a win over Moapa Valley in Boulder City that clinched a spot in the 2018 Class 3A state tournament. 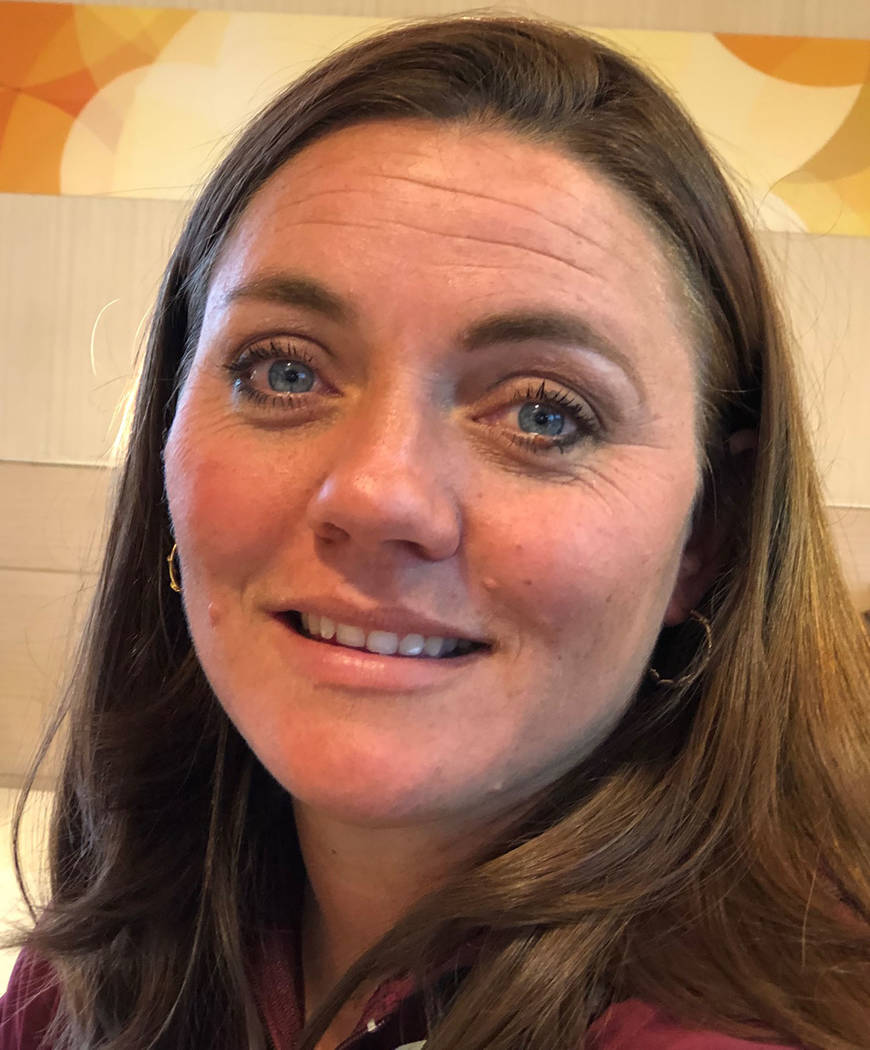 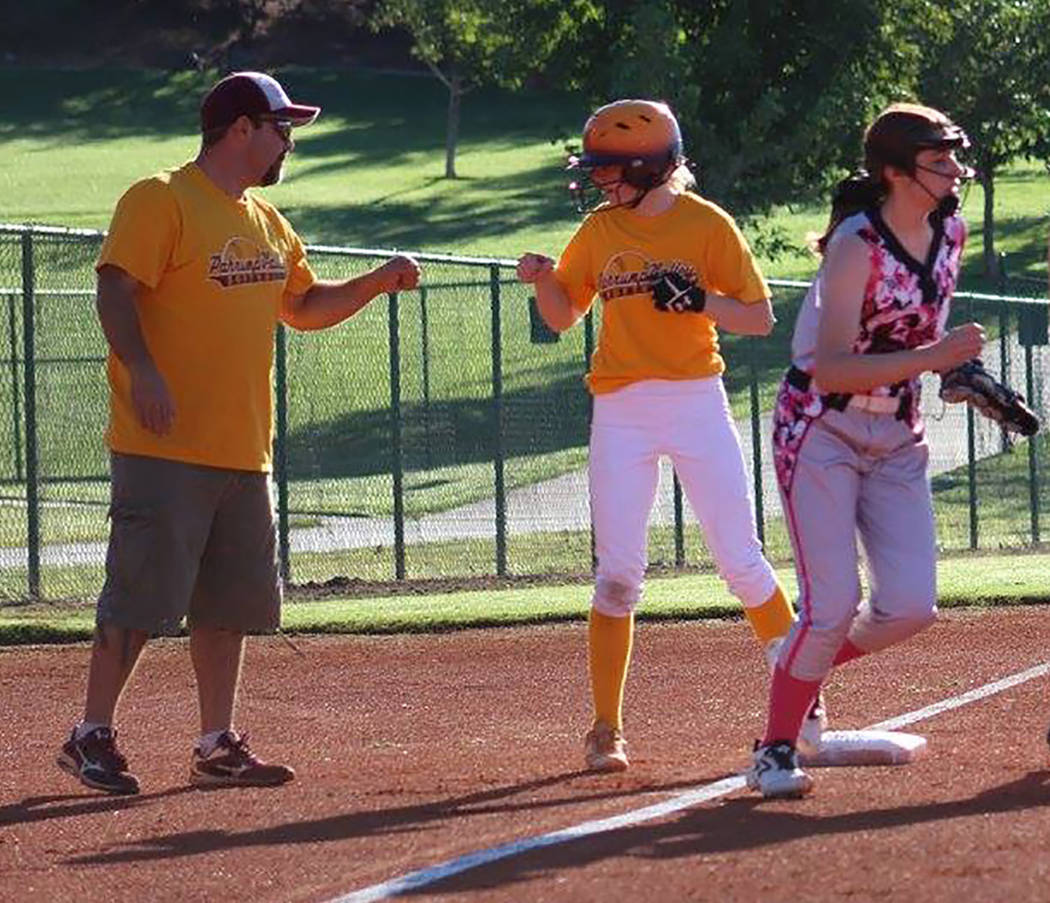 Cassondra Lauver/Special to the Pahrump Valley Times Rich Lauver congratulates Evandy Murphy after a triple during a U16 softball game against the Southern Utah Rebels.

Back in 1992, when Bill Clinton was running for president, he was fond of telling voters, “When you buy one, you get two,” in reference to his wife, who is at least as smart as he is, if not as politically astute.

There is a pretty clear parallel in Pahrump Valley High School’s hiring of Cassondra Lauver as its new head softball coach. Buying one definitely gets two, as Lauver’s husband, Rich, has coached baseball and softball for the Trojans while never being accused of being overly political. Not political enough, perhaps.

The Lauvers check a lot of boxes: Both are Pahrump Valley graduates. Cassondra played softball for coach John Toomer, now the school’s athletic director, while Rich played baseball for the Trojans before moving on to play for Lassen Junior College in Susanville, California, Cerro Coso Junior College in Ridgecrest, California, and Cal State San Bernardino.

Cassondra started coaching when their daughter, Skyler, was 8 years old. Skyler now is a junior and a 2018 Class 3A all-state player. They have coached former and current Trojans who played for the Lauvers’ Pretty Vicious travel team.

Rich is a former athletic director at the school and has had great success in the same role his wife now occupies. He was the softball coach when Pahrump Valley won its only state championships in the sport in 2003, 2004 and 2005.

That is the level at which the Lauvers want to see the Trojans perform. Routinely.

“Our focus is that our ultimate goal is to win a state championship,” Cassondra Lauver said. “All this other stuff is what we have to do to get there.”

“We’ll probably be the first team ever to walk into a season expecting to win a state championship without ever having been in that game,” Rich Lauver added.

The Trojans have been to the past two state tournaments after finishing as the runner-up in the Southern Region. They have dominated the Sunset League the past two years, winning by the mercy rule 20 consecutive times. But at state, they have gone 0-4 against Northern Nevada teams. Last season, they lost 12-2 and 8-0 and quickly returned home.

The coaches want more. Rich Lauver says much of the problem is a regular-season schedule that features too many noncompetitive games that don’t prepare teams for the postseason. He goes back to the days when all of the southern region’s teams in what is now Class 3A were in one league.

“Back when it was a competitive league, if you don’t show up, you lose. In every sport, almost,” he recalled. “It was Virgin, Moapa, Boulder, Pahrump and Faith Lutheran. Faith had an advantage in some sports, but as a whole, you show up or you lose. Every team, every time. No one would go undefeated in hardly anything, and it was great. We would go up north and fight and compete in all sports.

The rather unusual plan calls for making the most of those quick blowouts in Sunset League play.

“Every time we play at home in a league game, where we know it’s going to be a blowout, we will take the minimum number of players to the away game and leave two full teams in Pahrump, whether it’s varsity or JV, and as soon as that game is over the “real” game happens,” Rich Lauver explained. “You will see, 10 minutes after the game, the rest of the coaching staff will be running a seven-inning scrimmage battle, right after the game, against ourselves.

Those are not the words of someone satisfied to win the Sunset League and then hope for the best in the postseason.

“That is not our goal,” he declared.

It might sound intimidating, but remember that most softball players in Pahrump already know the Lauvers, who have been together since she was 15 and he was 17. And Cassondra Lauver is excited to be working with them.

“I love their heart when it comes to the game, I love the fact they want to work hard,” she said of the current Trojans. “We go out there and we are intense and we hustle. They’ll see us working hard, and they will also want to work hard. They are just an incredible group of kids.”

But the Lauvers are much more than a two-headed softball monster married for 22 years. The new coach touched base with several people she wanted to join her on the coaching staff, and had her husband not been permitted to be part of that staff, and that was by no means a certainty, it would have been a deal-breaker, she said. She made sure, as Rich said, that her ducks were in a row.

The biggest ducks, aside from the Lauvers themselves, are three pitching coaches, quite a change from last year when there was no pitching coach on the staff. A year earlier, Sara Coleman filled that role for the Trojans and now, after taking a year off and getting married, Sara Coleman-Colucci is back and will be an assistant coach with emphasis on pitching and outfielders.

Whitney Roderick, a 2014 Pahrump Valley graduate, was a four-year varsity starter and the type of mow-‘em-down pitcher the Trojans have not always had. She is now a middle school teacher and will be an assistant coach with an emphasis on pitching and corner infielders.

The third pitching coach will be Taylor Frazier. A native of Wyoming, Frazier used to travel three hours into Nebraska to play travel ball. Her emphasis will be on pitching and middle infielders.

“Our pitching coaches each will be assigned two pitchers, and if somehow something’s not working out they might trade off, they might look to each other for guidance, but this is your player,” Rich Lauver explained. “Go make this player insanely awesome, and here is your second player. Sara will have primarily young pitchers, and Taylor will be with the varsity most of the time and be calling the pitches.”

Staying on board is last year’s assistant coach, Susan Toomer, who will take over the junior varsity team. Rich Lauver will be a volunteer assistant with emphasis on practice planning and hitting. That makes perfect sense, as Rich has a very clear philosophy when it comes to practice.

“When our travel team was running drills, I went to a high school practice to help them with some stuff, and they’re running the exact same drill,” he recalled. “And the first thing I did was say, ‘Stop! Why are you doing that?’ ‘Well, because coach blah blah blah.’ ‘No, what’s the reason for doing that?’ And they had no idea, and in multiple drills. So not knowing the purpose of the drill voids the whole drill.

“I believe if they just do things robotically, they won’t have the buy-in. They’ll have the, ‘I’m going to be a machine and listen, and I will be respectful.’ But the true buy-in is in recognizing the value of that. Doing something because I told you to is not buying in.”

Does all of this sound kind of intense?

“It’s a little bit intimidating at first, I would think, because we don’t have a lot of lag time,” Cassondra Lauver said. “We hustle to the next station or the next drill or whatever we’re doing. We have work to get done, and we’re going to hustle throughout the entire practice. We want them to have friendly competition.

“This is the way I’ve approached things in my classroom and in softball,” continued Cassondra, an eighth-grade math teacher. “Be a hard worker. Go after things you want. Don’t get outworked. I would hope that’s not something new and bizarre for a kid, but I think the picture of what hard work looks like might be different.”

The Lauvers have evidence that what they do works, and in one sense bringing people with so much softball credibility in town to the high school team is a no-brainer. But anyone with a passing familiarity with administrators on any level knows the obvious isn’t always the choice, and the folks who make the decisions at Pahrump Valley High School should get some credit for this one.

Few people at this level know softball as the Lauvers do. Few people have coached three consecutive state champions as Rich Lauver has. Good luck finding a high school coaching staff as loaded as the one Cassondra Lauver has put together, with more volunteer assistants on the way.

Buckle up, everybody. It’s going to be one heck of a ride.