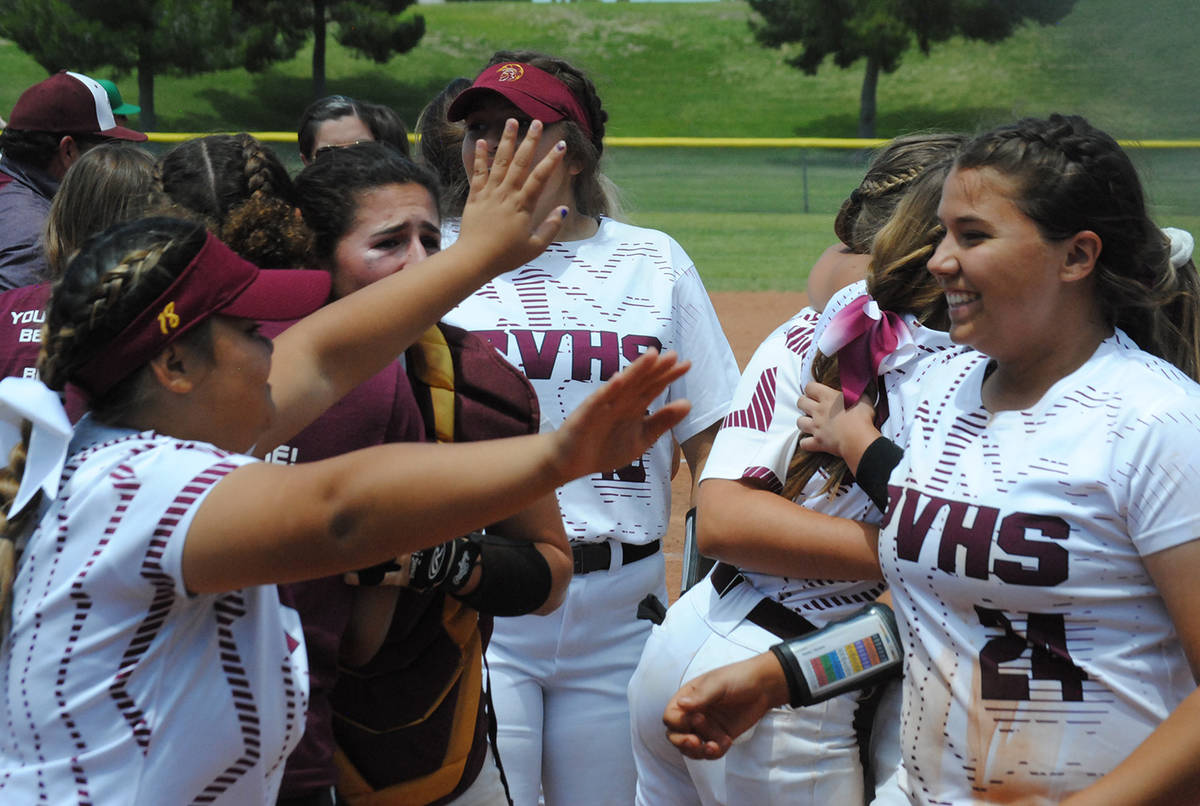 Charlotte Uyeno/Pahrump Valley Times file The Pahrump Valley High School softball team celebrates defeating Fernley for the 2019 Class 3A state title in Mesquite. The Trojans lost a chance to defend that title because of the COVID-19 pandemic. 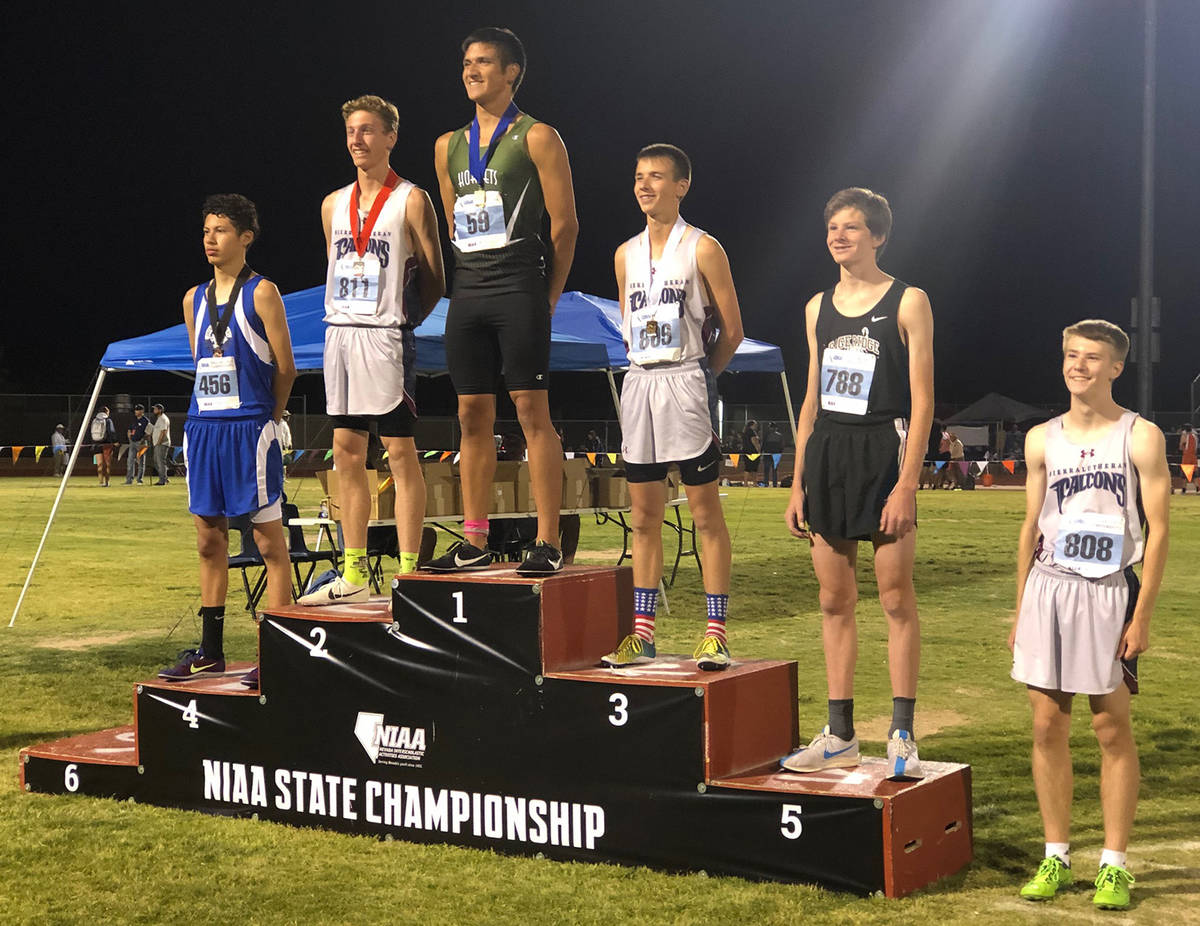 Tom Rysinski/Pahrump Valley Times file Beatty's Jose Granados stands tall after winning the 1,600 meters at the 2019 Class 1A championships. A senior this past year, Granados was expected to add to his nine region titles and four state crowns before COVID-19 called off the spring season.

When the Nevada Interscholastic Activities Association announced a dramatic pandemic-induced revision of the athletic calendar for 2020-21, the response was a mixture of disappointment, relief and happiness.

The disappointment was in the realization that there would be no sports before January, which, while probably inevitable, still is depressing to contemplate. No football Fridays, no soccer games, no volleyball matches, no Saturday morning cross country meets and no tennis matches. Fall isn’t really fall without those things for some of us.

The relief was a reaction to a decision that had coaches, administrators, athletes and parents waiting anxiously for weeks. The Southern Nevada Football Coaches Association wrote to the NIAA practically begging for a decision earlier last week, and coaches encouraged parents to call the NIAA to try and get the decision-making process moving. The announcement last Thursday at least let everyone know what was going on, whether everyone liked it or not.

Happiness came from knowing that nothing would be canceled because of COVID-19. Yes, it is very unlikely — the NIAA used the phrase “not anticipated” — that there will be state tournaments in any sport. To get every season in, each was reduced to six weeks of competition, leaving little room for postseason play. But at least every season had a schedule, and every sport would be played.

There is no “right” reaction any more than there was a “right” solution, but overall the NIAA came to a pretty good conclusion. Postponing fall sports in the hope that the pandemic would be more manageable in the near future was more or less pointless. Nobody knows for sure exactly what will happen, and the people who have been right most often since the pandemic started have been the ones who expected the worst; you know, the ones who didn’t ignore it until it dramatically ended an 11-year bull market on Wall Street and who didn’t get bored with it until red states starting getting hit hard.

Simply moving fall sports to spring might be a good idea for colleges, where very few athletes play more than one sport, but it would have been a bad idea for high schools, which are full of athletes that do that. Forcing them to choose could be defensible, I suppose, but why go there?

Think about what it would be like to play football and baseball at the same time, or soccer and softball, or any two sports that are normally played in different seasons. At the biggest schools, some teams would lose a top player who chose another sport. In medium-sized schools, many teams would be weakened significantly because top athletes would have to make a choice. And at small schools, including Beatty, Tonopah and Round Mountain, teams would have to cancel seasons since there wouldn’t be enough athletes to go around.

So the NIAA schedule removes that problem. Other states plan on playing football in the spring and “weaving” basketball in somewhere. (The only weave that belongs in basketball is the old Princeton offense, which confounded far more talented teams for years.)

Not having a state tournament is disappointing, but when you get right down to it, only a handful of teams will be affected. Does it really matter to a bottom-dwelling team in any sport that the season will end in six weeks?

At Pahrump Valley, several teams had to believe they were contenders this season, and to have to settle for a league title or the championship of a truncated region tournament will leave them wondering what might have been. But teams that play in the spring already had that feeling last year, and that’s where I have an issue with the NIAA plan.

The Trojans softball team lost the chance to defend its first state title since 2005. The Trojans baseball team liked its chances with two top-flight seniors in Chase McDaniel and Cyle Havel and a roster stocked with younger talent. The Trojans golf team is a regular in the postseason, and in track and field there are always individuals with a chance at glory. Not to mention Jose Granados at Beatty, where he was looking to add to his pile of Class 1A region and state titles on the track.

None got the chance.

The NIAA should attempt to give the spring sports what they already have lost once. PVHS baseball coach Brian Hayes certainly is thinking that way.

“Many of the baseball coaches are fighting for our kids to have a state tournament this season, even if it rolls out into the summer,” Hayes said. “Spring sports lost our state tournament last year, and it would be tough for our athletes to lose out on that two years in a row.”

Exactly. The winter, fall and spring seasons will follow each other directly, with the last week of competition in one overlapping into the first week of practice for the next.

Spring sports will not have that problem. The only thing coming after them is summer.

But the other point is more important here. Student-athletes lost the chance to compete for a state title once. That didn’t happen to fall sports, and it didn’t happen to winter sports. Only the spring sports are faced with two consecutive years without state champions being declared.

For the spring, just let them play.