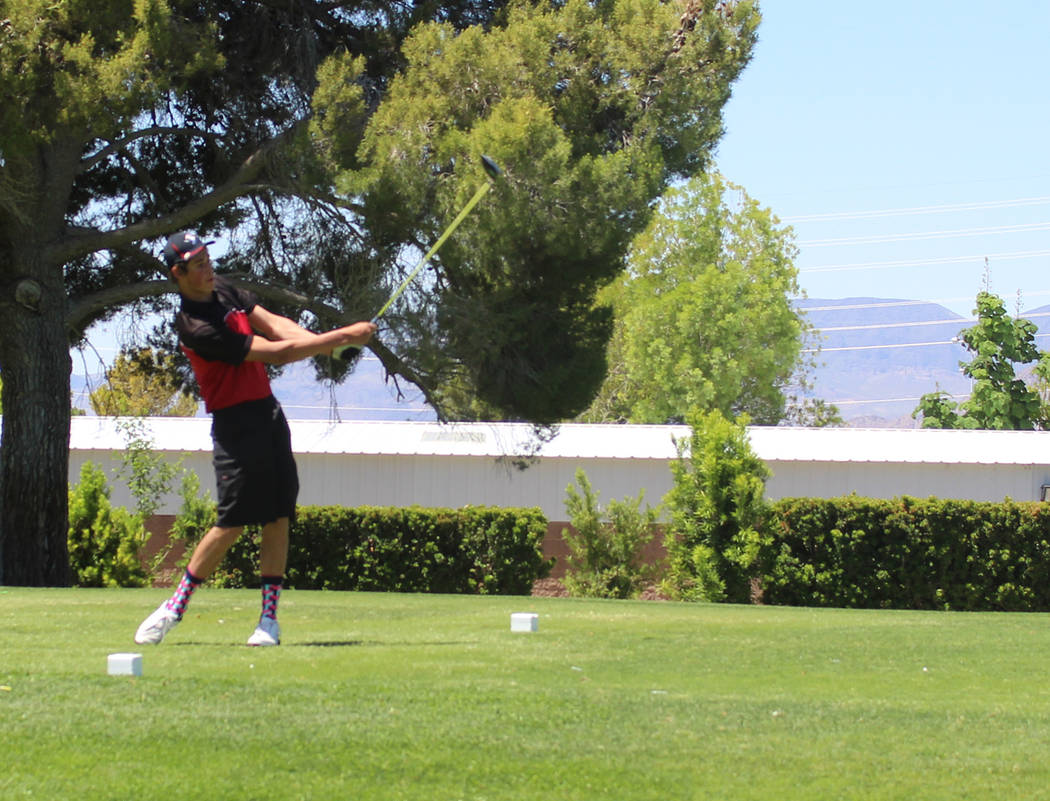 Tom Rysinski/Times-Bonanza & Goldfield News Sophomore Damian Paice of Tonopah tees off on the first hole to begin second-round play at the Class 2A state tournament May 17 at Boulder City Municipal Golf Course. 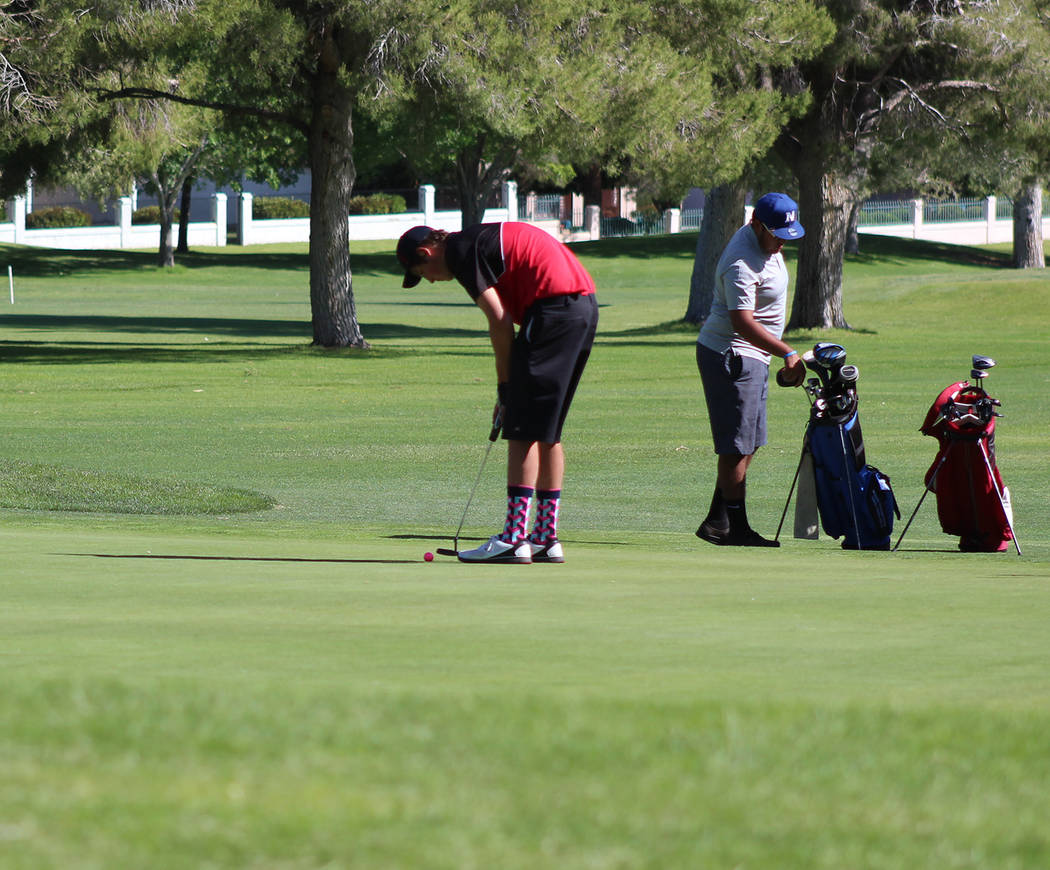 The golf season didn’t end on the highest of notes for Kevin Pope and Damian Paice, but just playing on the final day of golf season was an achievement for the Tonopah teammates.

Pope shot a two-day total of 195 and Paice finished with 214 at the Class 2A state boys golf championships May 16-17 at Boulder City Municipal Golf Course.

But for Tonopah golf coach Robert Otteson, the story was getting there, in part because it had been a while since two Muckers qualified for the state tournament.

“It only happened one other time, years and years ago,” Otteson said. “Our second year in the league we had two kids — Denver Otteson and Drew McCloud.”

Tanner Otteson qualified for the states a year ago as a Tonopah senior, but overall success has been limited. The lack of a golf course and true practice facilities is well known in Nevada golf circles.

“These other coaches around here tell us quite often they are surprised by how good the kids we have are considering we don’t have grass to putt on and grass to hit off of,” Robert Otteson said. “We’ve got a little artificial green, but it just doesn’t roll like it does on regular grass.”

“We don’t have a course or anything,” Pope added. “We have to hit off of turf, and our balls get messed up from the dirt we have to hit in. It’s a lot different hitting off of grass than turf.”

That didn’t stop Pope and Paice from qualifying for the states with solid performances at the 2A Southern Regional tournament at Canyon Gate in Las Vegas. Paice fired a 91 and Pope a 99 in that one-round event as the Muckers came within a shot of qualifying for states as a team, missing out on the fifth-golfer tiebreaker.

“That course was more to my liking,” Paice said. “It was more open. It was easier to hit straight. I was hitting my driver really well then.”

“I don’t like this course,” he said of Boulder City Municipal. “It’s way too hard for me.”

“I told him all you can do is get better,” Otteson said of Paice. “He said he couldn’t hit the driver straight.”

While Paice struggled with his driver, Pope’s putter was giving him issues.

“I could have hit some better shots,” Pope said. “The greens had bad slopes and bad breaks.”

“Kevin looked good,” Otteson said. “If he could have putted today, he’d probably be in the mid-80s. He said he had the same problem (Wednesday). He just doesn’t putt well on these greens.”

Both Muckers did better on the second day than the first. Pope shot rounds of 102 and 93, while Paice finished with 113 and 101. Cutting strokes off of their scores on the second day was a positive sign to Otteson.

“I’m proud of them,” he said. “Any time you can do better the second day means you’re coming back and trying.”

Improvement has been seen throughout the Muckers’ lineup this season. Paice estimated he was shooting about 120 at this time last year, and Otteson said junior Austin Leach was shooting 70 strokes better than he was at the beginning of the year.

Generating interest in golf without a course in town is a challenge, but Otteson approaches it with missionary zeal.

“We’re going to get a kids’ summer program so we can get a little more interest in this,” he said. “We had six kids this year, so our numbers are up, and maybe next year we’ll have eight or 10 kids. And all these kids are coming back next year.”