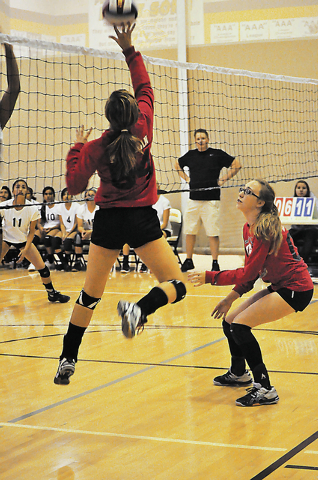 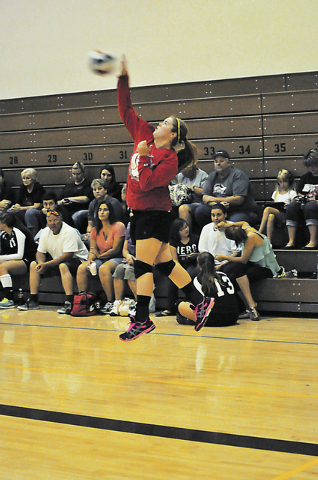 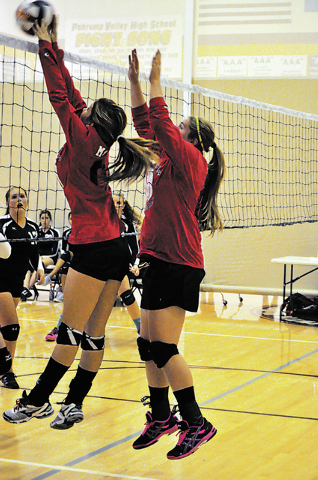 The Tonopah Muckers are one of the best teams in Nye County and they proved it by beating most of the teams at the Pahrump Valley Volleyball Invitational on Saturday.

Tonopah has a team that can come from any direction with agility and strength. The team also has solid serving, and with six seniors, they play as a cohesive unit.

Coach Harvey Gonzalez was proud of his girls’ performance in Pahrump.

“The girls have been playing for a long time together. They are a great group of girls. We are trying to integrate some of the younger girls. Three girls from the junior varsity team made the trip with us. We wanted them to have the experience. There is a lot of work still to do. There are some holes on defense that we have to cover and plug. We can’t get lackadaisical. I am very pleased at what I saw today,” he said.

Gonzalez takes over from longtime coach Judi Boni and hopes to repeat as the Division 4 state champions.

Serving was definitely a skill the Muckers unleashed on Saturday.

“The serving is off the charts today. They practice hard on that. It’s a hard working team and they are fun to be around. We will have to play Pahrump, a bigger school that has a lot of talent. It will be good for the girls. My biggest worry is defense. We have to make sure we are covering the angles,” he said.

After the Pahrump game in which Tonopah beat the Trojans 2-0, Gonzalez was pleased.

“Those ladies played their hearts out. They were flying to the ball. They wanted it and wanted it bad. When the girls put their mind to something they are tough to beat. I am very happy that they showed up. They were trying to make a statement. I am extremely proud of them. I just hope they can keep up the intensity because nothing has been done yet. We are just playing volleyball now and they have a long way to go, but they are wonderful to watch when they get going. As long as they stay up and remember their coverages they can do it. We still have work to do with our blocking, our footwork is throwing us off, but for the most part it is coming back to us. I say if they played like this last week we would have done better at the Ely tourney,” Gonzalez said.

Ashley Gray was upbeat and confident about her team. She is one of the Muckers who has worked hard in the off-season to improve on her serving. When Gray serves, she gets high on the ball and delivers a cannonball to the other team every time.

“I changed up my serving this year. I did not start jumping until this year. We wanted this game bad because we beat them last year and we wanted to keep it going this year,” she said.

Coaches at the PVVI said Tonopah has not missed a beat since getting a new coach. They did not win the tournament, but were in the semifinals and lost to the Pahranagat Valley Panthers.

“We don’t block that well. That will not be our strong point. So we have to focus on serves and we have to focus on defense. We try to let our opponent make mistakes that is all we can do. We are starting to hit harder. Tonopah is tough this year. Tonopah has a new coach, but he has them right where they were last year. They just have to be a little more consistent,” Whipple said.