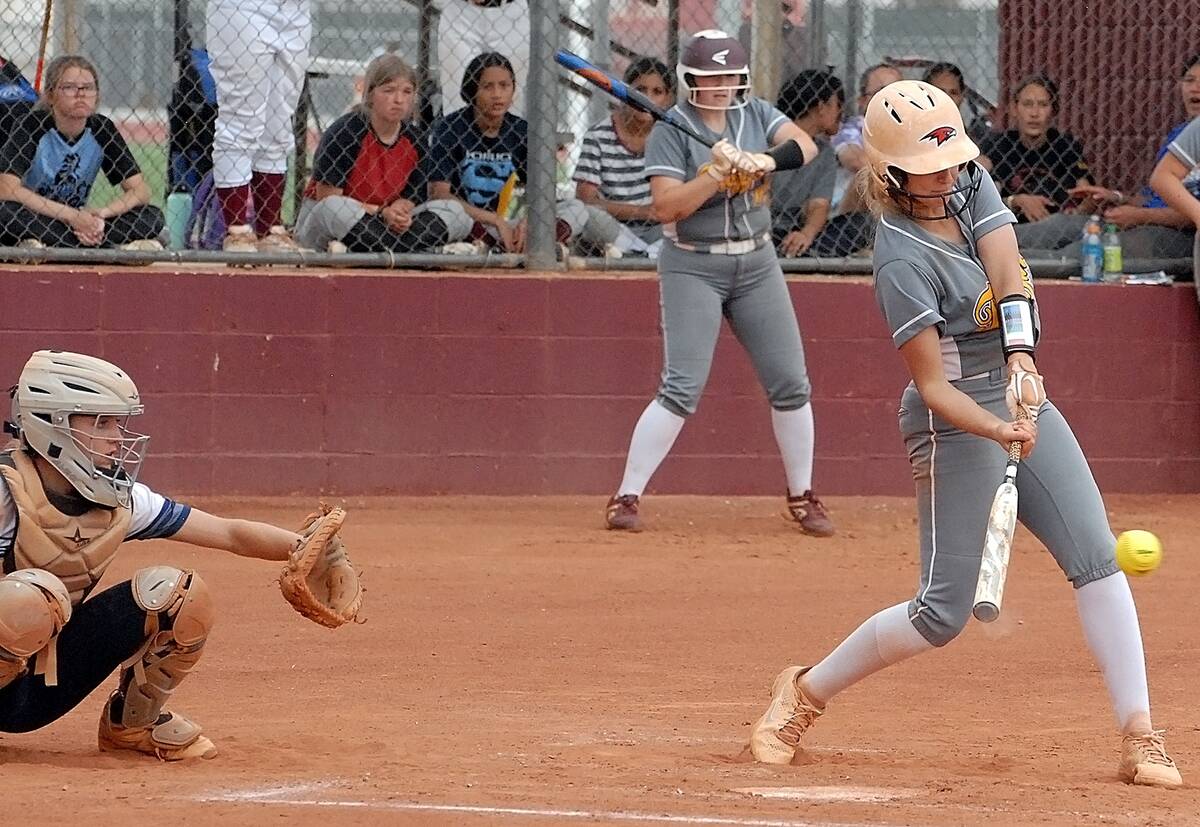 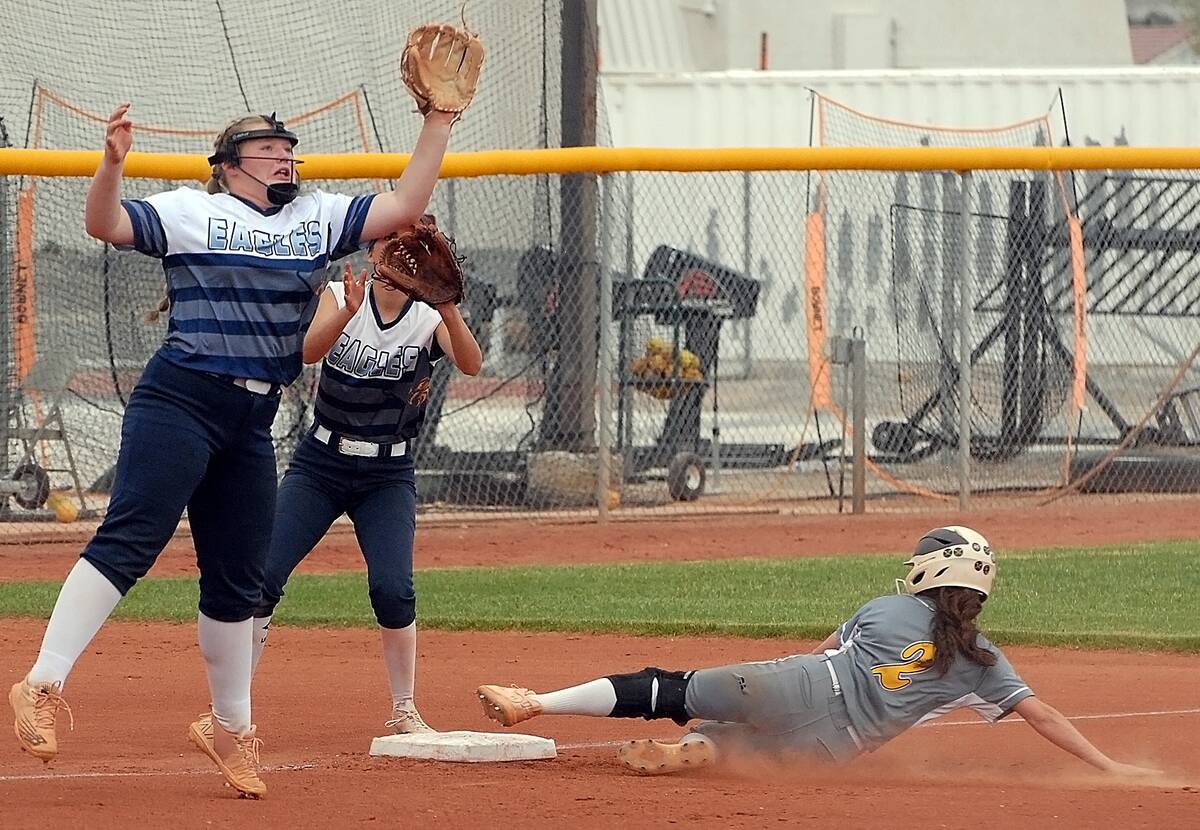 The team opened the tournament with a tough game against the Lowry Buckaroos. The Trojans were defeated by a score of 16-1.

Immediately following the game against Lowry, the Trojans had to play the second half of their back-to-back games on Thursday morning.

This time, the Lady Trojans were playing against the Winslow Bulldogs, who traveled from Winslow, Arizona to participate in the tournament.

I overheard one of the parents confirm that it is in fact the Winslow that is referenced in the song “Take It Easy” by the Eagles.

This game went much the same way as the first game against Lowry.

Ava Charles got the start on the mound for Pahrump Valley. She lasted into the third inning, giving up all 16 runs and allowing 14 hits to the Bulldog batters.

Charles was relieved by Ciara Stragand in the third inning, who finished the game off for the Lady Trojans.

The Trojan batters could only muster up five hits in the game, with Charles getting two of them. Three of the five hits by Pahrump Valley went for doubles.

Stragand, Charles and Shania Hopkins each had a run batted in for the Trojans.

Pahrump dropped the game against the Bulldogs by a score of 16-3.

On Friday, the Lady Trojans played another doubleheader.

The Panthers entered the game 2-0 in the tournament games after getting wins over both Lowry and Winslow.

This was the best game the Lady Trojans played throughout the tournament.

Both teams got on the board early as they headed into the second inning tied 3-3.

Stragand got the Lady Trojans on the board with a 2-run single to the center fielder. Cat Sandaval came around to score easily, while DeAnna Egan came in to score on a fielding error by the Panthers.

During the next Pahrump Valley at-bat, Haven Nelson came in to score on a double steal attempt.

After Palo Verde tied up the game in the bottom of the first inning, the Lady Trojans took the lead back in the top of the second inning on an RBI single by Egan.

Sandaval got her second start of the tournament for Pahrump. She pitched four innings, giving up four runs on five hits while striking out two batters.

Following the 3-run first inning by the Panthers, Sandaval only allowed one hit over the next three innings.

She was eventually replaced by Stragand in the fifth inning.

Despite the Lady Trojans entering the bottom of the fifth inning with a 4-3 lead, the Panthers were able to get multiple runners on base. They tied the game up on a wild pitch. The next batter drilled a pitch to deep center field to score the game-winning run for Palo Verde.

Pahrump Valley dropped the game by a score of 5-4.

The second half of Friday’s doubleheader was played against the Bingham Miners of South Jordan, Utah.

The Lady Trojans’ game against the Miners was another tough one for the tournament.

Pahrump Valley pitching got attacked early and often. The Miners put seven runs on the board in the top half of the first inning.

Egan was the leading hitter for the Lady Trojans. She finished the game 3-for-3 with three singles.

Despite only going 1-for-2 on the day, Hopkins had her hands on two of the four runs scored for Pahrump Valley. In the bottom of the first inning, Hopkins delivered a two-out single that scored the team’s first run of the game.

In the bottom of the second inning, Hopkins took a bases-loaded walk that helped bring in another run for the Lady Trojans.

The Miners came out on top in this matchup by a score of 16-4 against the Trojans.

In the final game of the tournament, the Lady Trojans played in a wind-filled game against the Imperial Tigers.

The wind seemed like it wanted to rival what went on during the boys’ baseball tournament last Monday in Las Vegas. The wind was swirling and the dust was flying everywhere.

There were a few times in the game where the ump even called for a pause in play because there was so much dirt flying through the air.

The game got off to a painful start for Pahrump Valley. Their first two batters were both hit by pitches.

It appeared that Sandaval was hit in her knee brace, but it didn’t offer much protection from the ball. She had to take a few minutes to shake off the pain of the hit so that she could make it down to first base.

Both batters who were hit, Sandaval and Egan, came around to score when Stragand lined a pitch to deep center field for a two-run double to give the Lady Trojans a 2-0 lead.

This would be the last time they saw the lead in the game, as Pahrump struggled at the plate.

Pahrump Valley scored their last run in the top of the fourth inning when Toni Cross-Smith scored on a wild pitch after just hitting a triple.

The Lady Trojans would drop the last of their tournament games by a score of 12-3.

They’ll be back in action on Wednesday, April 20, when they travel to Valley High School to take on the Vikings. First pitch of this game is scheduled for 3:30 p.m.