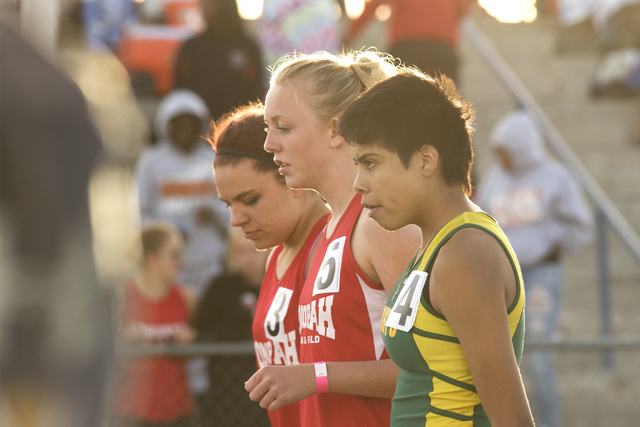 The Beatty girls took the Southern Regional Division IV title with 145 points on Saturday. It was the seventh regional title by the girls according to their coach Ellice Dunsterville.

The girls beat Tonopah, who came in second, by 10 points. Lund came in third with 67.

The coach said the Beatty girls had the lead from the beginning of the meet and at the end of the first day their lead was about where she expected it to be. It was on the second day that things got close.

“Going into the last two events we had a two-point lead over Tonopah, or so I thought,” the coach said.

An Indian Springs girl inadvertently ran five events. In track each athlete can only run four. The girl was disqualified and points and medals were exchanged, giving the girls the championship.

Athletes that finished in the top four qualified for state. Most of the Beatty girls team will be going to state.

In the 100-meter dash the girls will send sophomore Vanessa Gamboa, who took third place (14.49 seconds) and sophomore Rosa Gutierrez, who took fourth (15.83). The two Beatty girls at state need to beat freshman Kayla Slattery from Tonopah who took first place (13.90) and also beat the Northern times from their regional meet.

The Hornets will send all four girls relay teams to state.

This year Beatty has only one jumper going to state and that is Gil, in the triple jump. Gil took second place (27-08.25).

Kellie Rogaczewski from Smith Valley had the best score from the North (32-02) in the long jump.

The coach felt the girls had outdone themselves.

“I was so proud of them,” she said. “Many of them had personal records (PR’s) in their events throughout the two days and you could see the confidence on their faces that deep down they knew they could win division as a team.”

Dunsterville was excited about this finish.

“Both teams really stepped it up and brought all they had, both individually and for the team,” she said. “Had it not been for the four boys pole vaulting, which they all cleared opening height, we would have stayed in third place behind Tonopah and Spring Mountain.”

The boys qualified in all four relay teams for state.

Jacob Ybarra threw a 90-05 in the discus for fourth place. The best throw came from the North’s Erik Carpenter from Carlin (128-04).

Beatty took first through fourth in the pole vault: Nate Russell vaulted a 9-07, Luis Flores vaulted a 8-0, Rowdie White vaulted a 7-03 and Favela vaulted a 7-0. Braxtun McCann vaulted a 12-0 from Smith Valley and is the height to beat.

The Hornets took third and fourth in the long jump. Junior Adajar took third place (17-04) and Russell took fourth (16-01). Ethan Hardacre of Sage Ridge from the North jumped a 21-0.

The track coach said the boy’s score was “the icing on the cake.”

“They worked just as hard, and came back from behind to take runner-up to Spring Mountain and beat Tonopah by three points,” Dunsterville said.

As far as how Beatty will do at state, Dunsterville said the North is strong but the girls and boys have a lot of confidence.

“We are going to have a fun weekend, and see some amazing results within our own team and many other teams also,” she said.