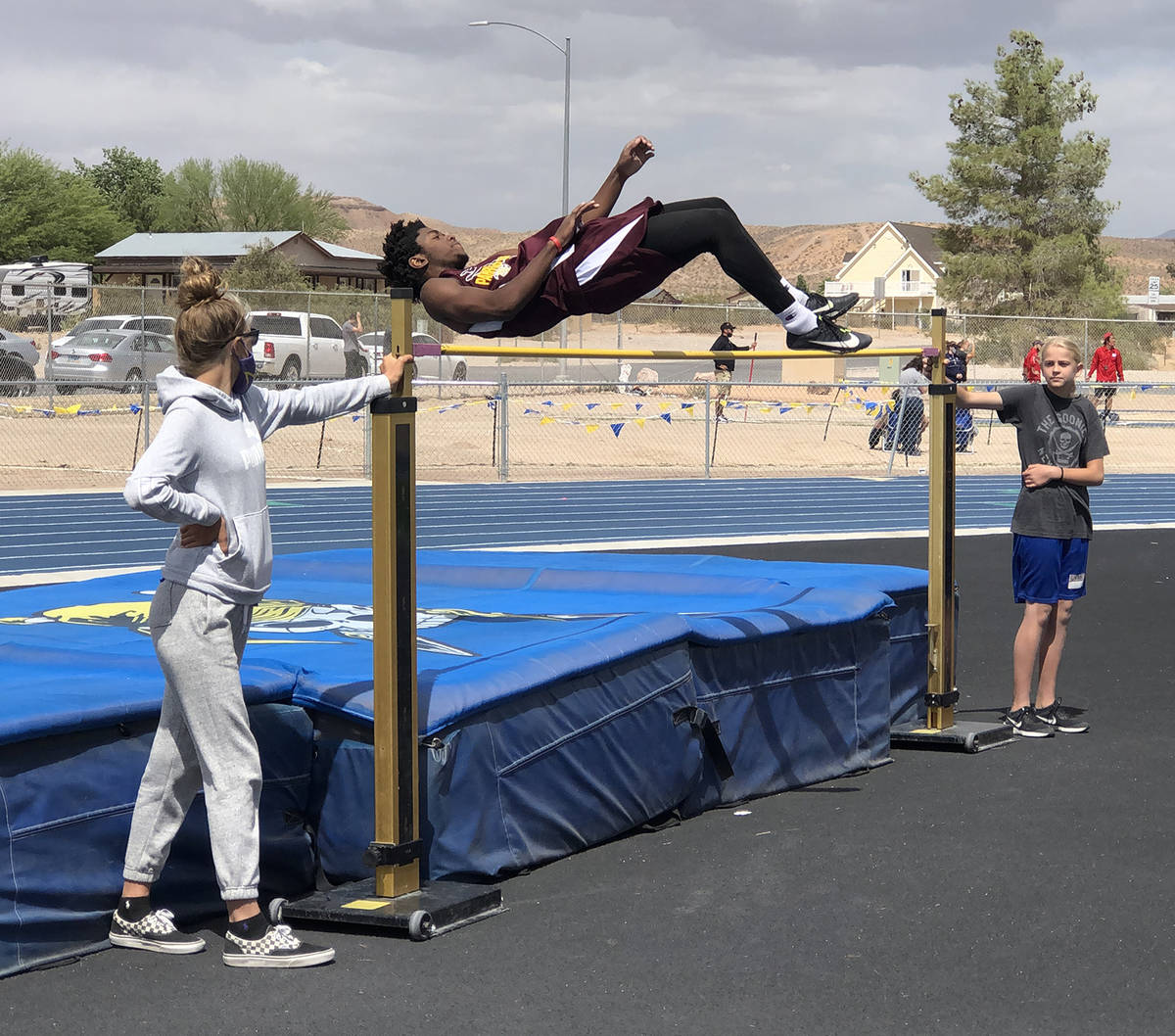 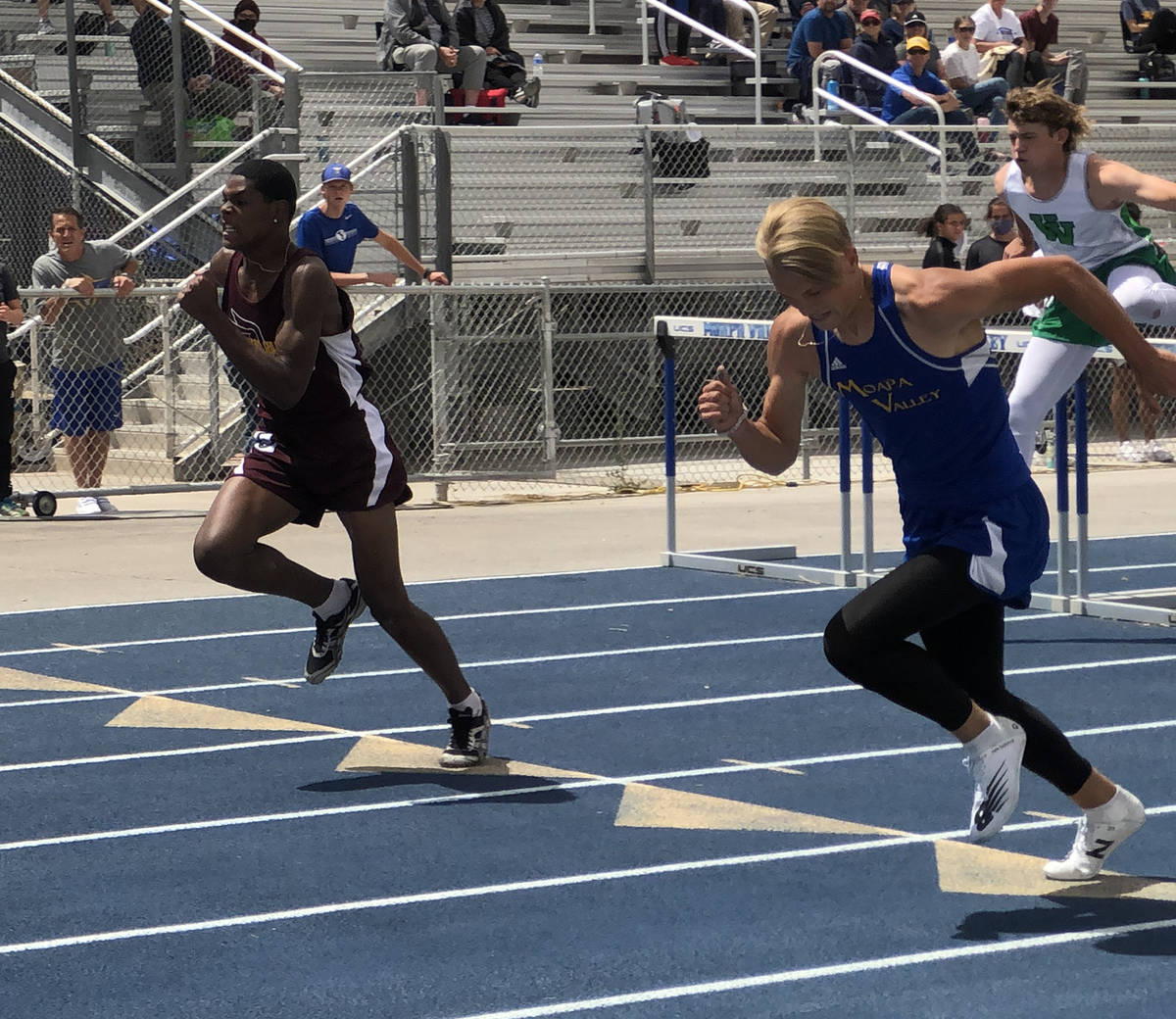 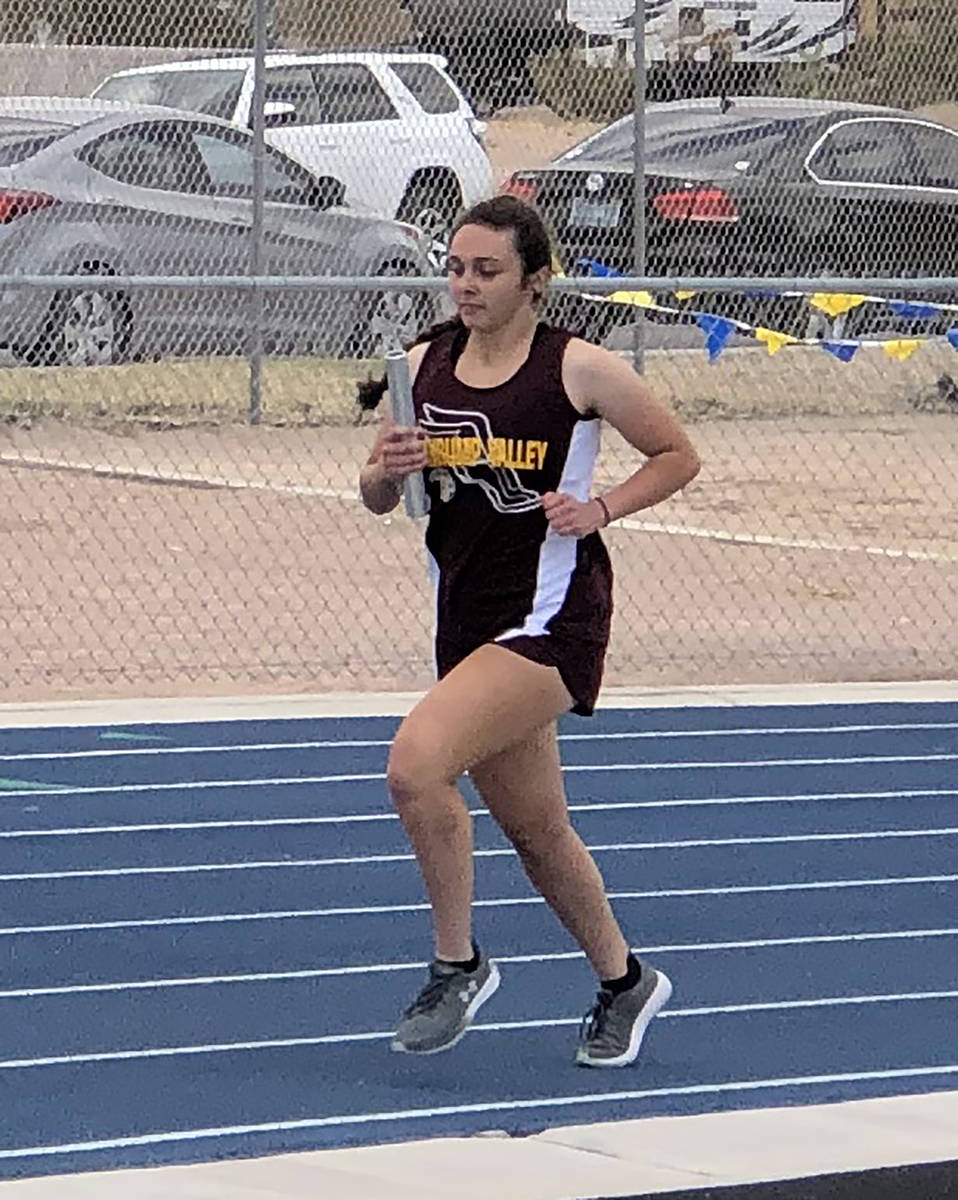 Tom Rysinski/Pahrump Valley Times Freshman Emily Lewis runs the opening leg of the 4 x 800 relay for Pahrump Valley at the Class 3A South Region Championships on Friday at Moapa Valley High School. The Trojans won the event by almost 26 seconds. 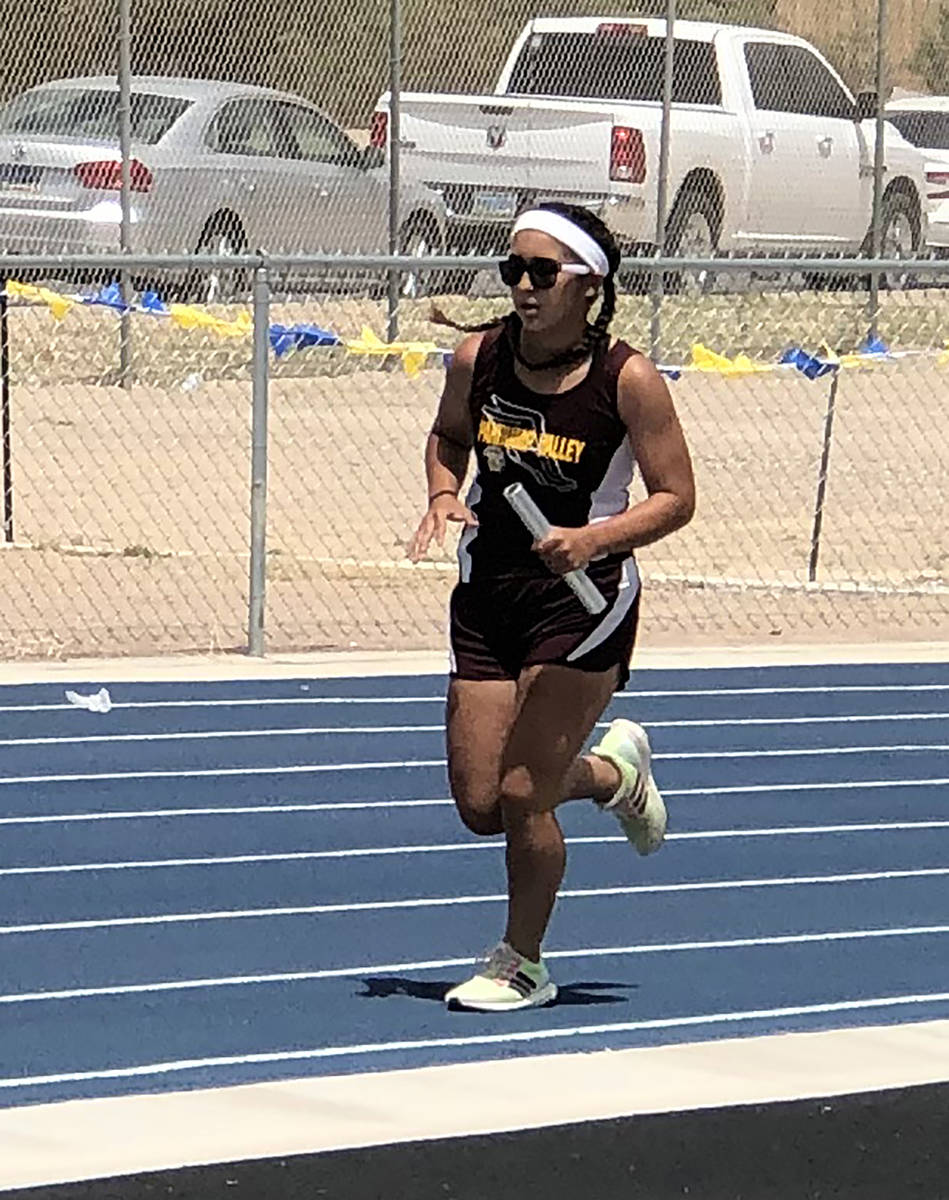 Tom Rysinski/Pahrump Valley Times Freshman Paris Coleman runs the second leg of the 4 x 800 relay for Pahrump Valley at the Class 3A South Region Championships on Friday at Moapa Valley High School. The Trojans won the event by almost 26 seconds. 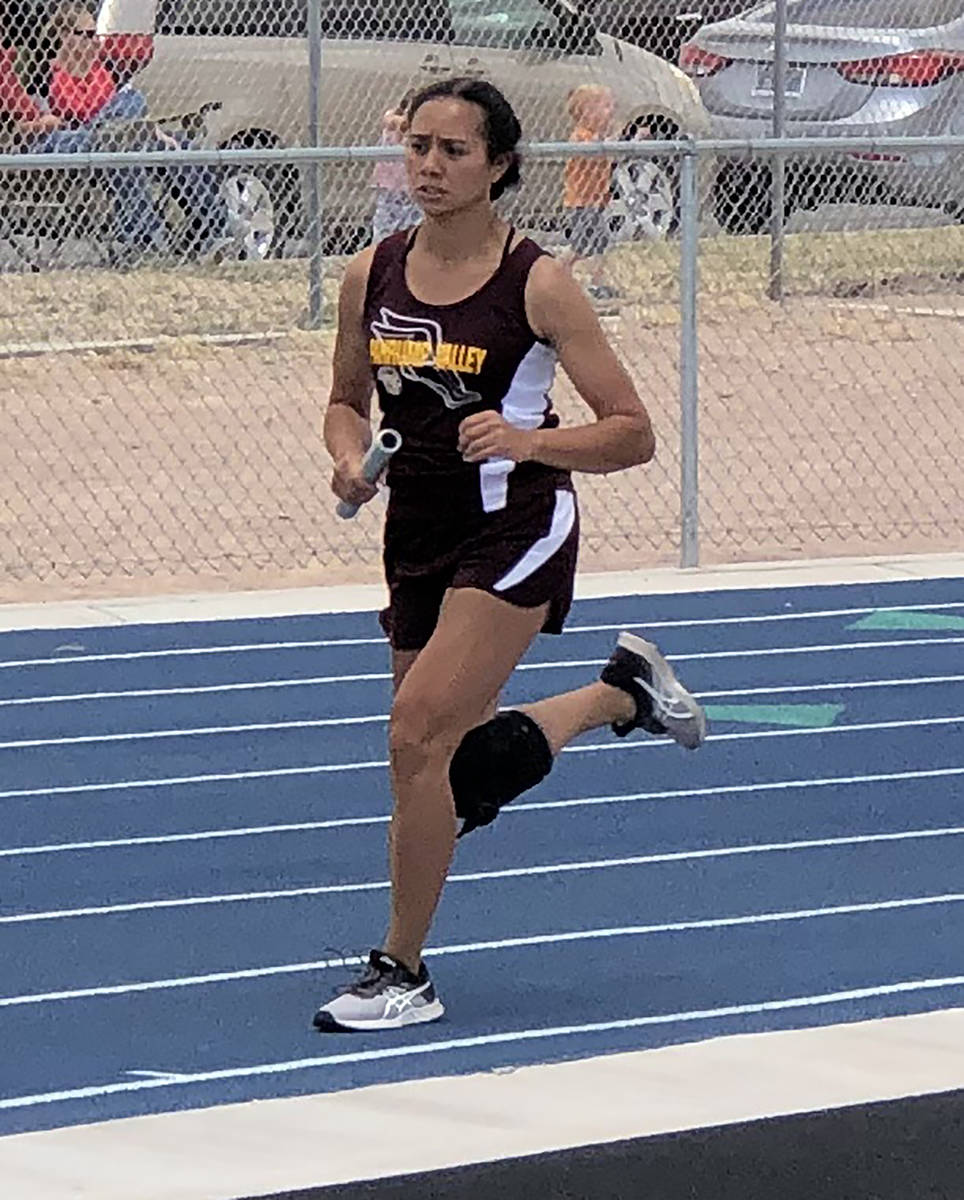 Tom Rysinski/Pahrump Valley Times Junior Makani Araujo runs the third leg of the 4 x 800 relay for Pahrump Valley at the Class 3A South Region Championships on Friday at Moapa Valley High School. The Trojans won the event by almost 26 seconds. 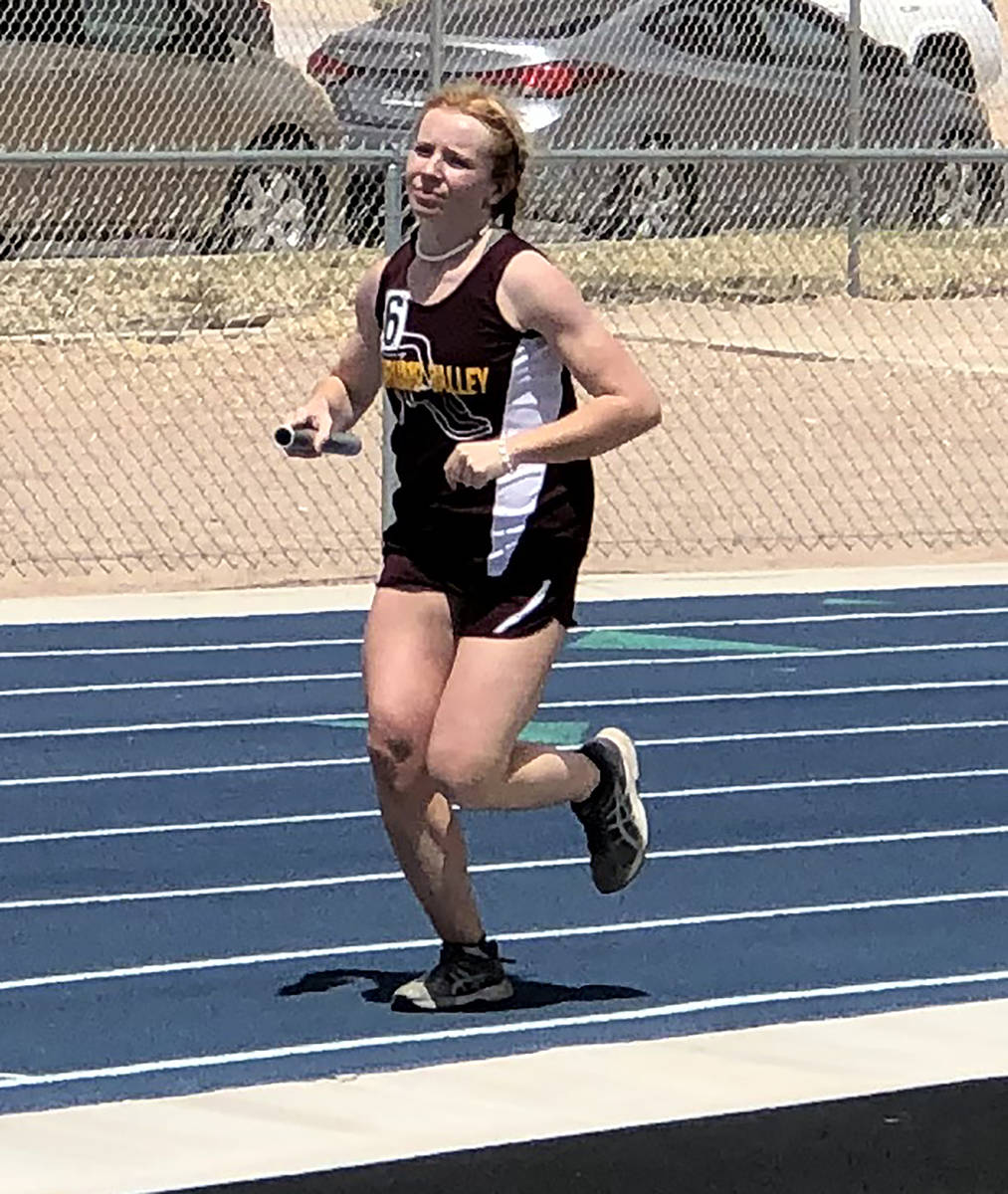 Tom Rysinski/Pahrump Valley Times Senior Makayla Gent runs the anchor leg of the 4 x 800 relay for Pahrump Valley at the Class 3A South Region Championships on Friday at Moapa Valley High School. The Trojans won the event by almost 26 seconds.

But when you go into the meet as the favorite — the Pahrump Valley High School sophomore was the only high jumper in the region to have cleared 6 feet during the abbreviated season — the twin goals can, every once in a while, cause a moment’s hesitation.

That was the case for Edghill after he and juniors Jimmy Kelly of Virgin Valley and Peyton Neilson of Moapa Valley each cleared 5-10. With the bar being raised in 1-inch increments at that point, Edghill pondered skipping 5-11 and gunning for 6 feet, which was his personal record in the event.

“That’s what I was going to do,” he admitted afterward. “But they lost, so I had to secure the W.”

So when Kelly and Neilson failed to clear 5-11 (5-10 was the personal best for each of them), Edghill took care of business first, winning the meet and scoring 10 points for the Trojans by soaring effortlessly over the bar.

But he wasn’t done.

Having already ducked out of the high jump to do the long jump — “I did a few jumps, but they don’t count because I didn’t feel like doing it,” he said. So he went down as a scratch, but it’s worth noting that had he matched his personal record of 19-5.75 set May 7 at Durango, he would have placed second, just ahead of Kelly. Again. — Edghill ran off to take part in Pahrump Valley’s 4 x 100 team. Edghill teamed with Triston Church, Logan Gavenda and Brandon Ondrisko to place fourth in 47.41 seconds.

Despite a discussion around the high jump pit that Edghill wouldn’t have much left in the tank after that, he insisted he was fine to finish the high jump.

But the high jump is much more than just a physical contest to him.

Edghill said he has been high jumping for more than three years, starting in seventh grade.

“I picked it up really quickly, because I had a really good coach,” he said, crediting Jennifer Miller at Rosemary Clarke Middle School.

Gavenda placed fourth in the high jump, clearing 5-6, with sophomore Ivan Crisler (5-4) and freshman Chase Otteson (5-2) right behind him.

But Crisler had bigger fish to fry, and had been working more on his hurdling than on his high jumping in recent weeks.

“Because I feel like I’m better at hurdles than I am at high jump, so I want to work on what I’m better at,” the Pahrump Valley sophomore explained.

Looming in the hurdles was Moapa Valley junior CJ Anderson, whose best time of the year going in (18.24) was slightly better than Crisler’s (18.64).

“I was kind of confident,” Crisler said. “I saw some tall guy, and I thought he was going to beat me. But he started hitting the hurdles and I was clearing the hurdles, and I caught him and I passed him.”

Not by much, as the two raced to a thrilling finish.

Officially, Crisler’s time was 17.96, while Anderson’s was 17.98 with Virgin Valley senior Camron Noel finishing third in 18.73. All three times were PRs.

Along with 10 points in the 100 hurdles, Crisler picked up 6 points for placing third in the 300 hurdles (46.82), 4 points for his fifth-place high jump and 3 more with a long jump of 17-8, good for sixth. That was almost one-fourth of the team’s points, as the Trojans boys finished third in the meet, racking up 99 points.

That total left them just 12 behind second-place Virgin Valley and well behind host Moapa Valley’s 242.

Pahrump Valley’s girls wound up fifth with 59 points, 20 points behind fourth-place Clark. But the girls also had two winners, with senior Kate Daffer and the 4 x 800 relay team earning 10 points each for the Trojans.

Daffer’s win was no surprise, as she had the best seed distance in the discus entering the meet at 103 feet. But she exceeded that Friday, recording a personal-best 113-8. The senior also finished third in the shot put at 29-10.

Freshman Emily Lewis got the Trojans off to a great start in the 4 x 800 relay, and classmate Paris Coleman, junior Makani Araujo and senior Makayla Gent kept it going. When Gent crossed the line in 11:09.85, the Trojans were almost 26 seconds ahead of second-place Boulder City.

The Trojans had a few other top-five performances: Senior Bodhi Ledford’s 101-4 discus was good for second, Lewis finished third in the girls 1,600 in a PR of 6:07.94, and Gavenda turned in a fourth-place distance of 37-9 in the boys triple jump.

Pahrump Valley track and field coach Fred Schmidt saw some good things at Moapa Valley and was proud of his team for getting through this most unusual of seasons.

“I think the results show a good representation,” Schmidt said. “I’m thankful to my coaching staff for staying fast to those principles we all believe in, ‘always moving forward,’ which is work hard and stay focused on your goals even amid the craziness.”