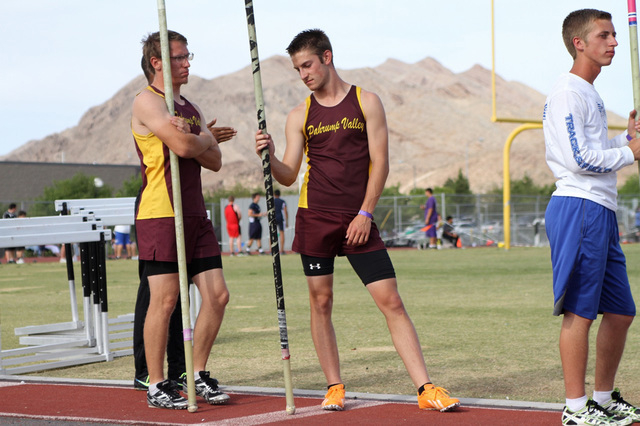 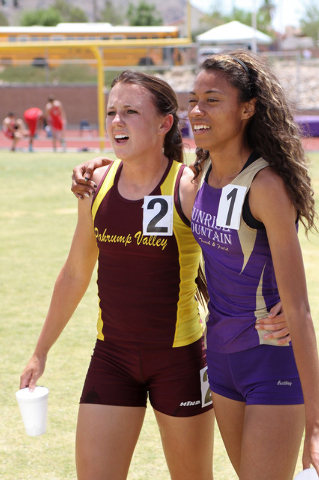 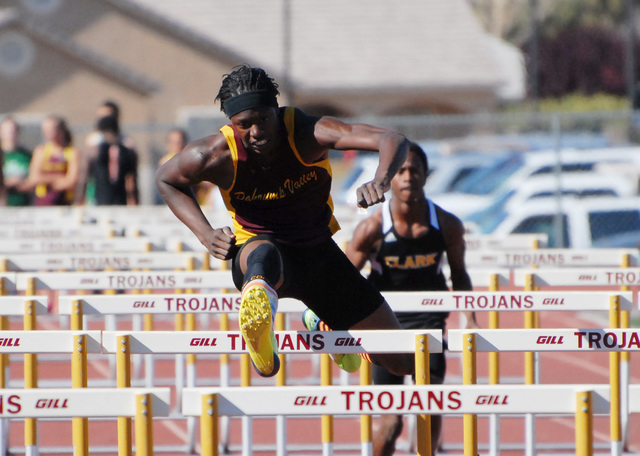 The Trojans Track team will send six boys and seven girls to the state track meet this Thursday for the meet in Carson City on Friday.

Devon Montgomery will be competing in the 110 hurdles after winning first place (14.60) and also is in the 300-meter hurdles, where he finished first with a 38.93. In the 110, Montgomery edged out JR Hubert of Moapa Valley, who had recorded a faster time on paper going into the race.

Kirkwood had entered Montgomery in the 300 over the 400 because he felt Montgomery had a better chance of winning state in the 300. Kirkwood commented on his performance in the 300.

“Devon had a pretty good clean race. He ran clean and he didn’t hit any hurdles and he ran like his hair was on fire between them. The other kid just could not keep up with him and this was a personal best but it was not a school record. He just crushed his opponent in the finals.”

Kirkwood said Isaac Davis was disappointed in the triple jump because he missed qualifying for state by a couple of inches with a mark of 40-01.5. The 4th place finisher was Bryce Neagle of Faith Lutheran with a 40-08.5.

“He did triple jump first and hit a 40. He just missed it and so he took it out on the high jump and qualified in that with a 6-01.0. I expected him to do well in the triple and the high and he got the high. Good for him,” Kirkwood said.

The boys qualified with one of the best times of the year in the 4×100-meter relay, running with Keenan Harris. Their time was 44.15 seconds to take 4th place.

“It was pretty low and the team did a good job of knocking a second off,” Kirkwood said.

There was a little bit of controversy at the meet. Michael Carlson didn’t qualify for state in the 300 because the judge said he knocked a hurdle into lane 6 from lane 5 and so they disqualified him.

“Two hours later I saw a video of the race and saw that Michael went over the hurdle cleanly and some other runner smashed into it causing the hurdle to fly,” The coach explained.

Kirkwood said the video could not be used to change the race results but he did mention it to the judges to let them know they had made a wrong decision.

“I just wanted the judge to know that he blew the call. Protesting would not have changed anything. Michael ended up finishing in 5th place anyway,” he said. Carlson did qualify in the 110 with a 15.07 time.

For the girls, Megan McDermott qualified for state in the triple jump, Andi Bishop for the pole vault, Sydney Sladek for the 800 and 400, Kelbie Middleton for the 100 and 200, and the 4×100 relay. Three other girls qualified for the 4×100 also, Kelsey Souza, Amber Hill and Jamie Murphy.

McDermott runs the hurdles but did not qualify for them this year. For the triple jump she qualified with a 31-10.00 and finished fourth at the regional meet. Her best jump this year was 32-10.75.

Andi Bishop qualified in the pole vault with a height of 7-6.00 and her best ever vault this year was 9-00. She finished in 4th place.

Sydney Sladek was the best in the South in the 800-meter run. She finished 1st with a 2:15.70 time. She also qualified for state in the 400-meter run, finishing in 2nd place with a 58.18 time against Clarrisa Maxey of Faith. She is ready to defend her 800-meter run title.

Kirkwood was not surprised by the regional results.

“I think the people that advanced were our work horses all year. These were the best,” he concluded.