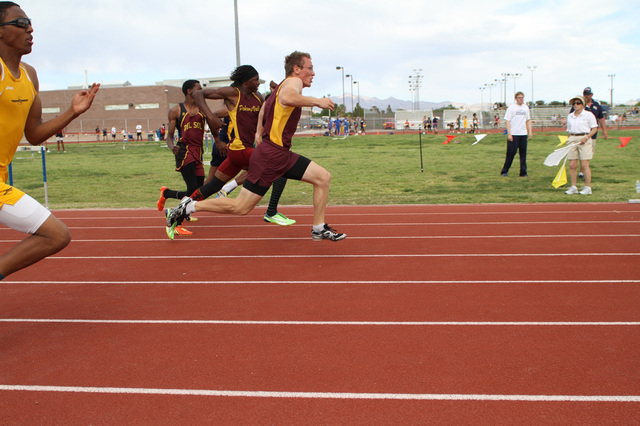 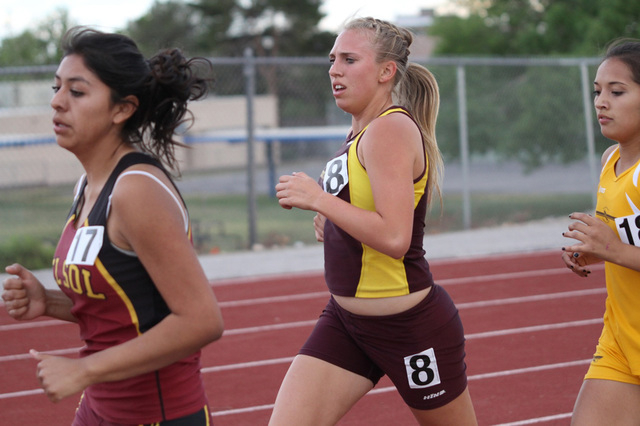 Trojans track traveled last week to two different meets. Earlier on Wednesday they went up against the Cheyenne Desert Shields and prevailed on both sides of the house.

On Friday, the team traveled to the Ron Resler Invitational in Boulder City and had some more outstanding performances by both boys and girls.

Trojans Coach Ed Kirkwood was not surprised with his team performances.

A lot of what happens on the track is due to the hard work of Devon Montgomery. He has taken up some of the slack when sprinter Keenan Harris pulled his hamstring muscle almost a month ago.

“Devon broke the school record in the 400-meter run, which was 50.50. This was a hand time with a correction added to it. The team had a good experience running in the wind,” Kirkwood said. “The handoffs for both girls and boys are really starting to click. The teams are starting to get to know each other for when to say ‘go’ and when to take off is a lot smoother.”

Not only did Montgomery do well in the 110, but Michael Carlson had a first in the 300-meter hurdles (41.9) and he posted 10-00 feet in the pole vault for his personal best for a first place.

“He has been trying to get down to 2:07 and was excited to get his personal best,” Kirkwood said.

The boys also did well in the jumps with Isaac Davis taking a first in the high jump, sailing over 5-10.00. Davis also took first in the triple jump with a 39-04.50.

“Cipollini got a new pole and is making adjustments. The vault coach said he will just come out to a meet and will PR one day going from a 10-foot mark to a 12-foot mark. The coach said he is slowly increasing the length of his approach. It’s a big thing to move to a new pole for vaulters because it’s longer and heavier, so it takes some time to get use to,” Kirkwood said.

After Cheyenne, the boys traveled to the Ron Resler Invitational on Friday, where they competed against 18 teams and finished 8th with 41 points.

Montgomery was helped in the 110 hurdles by Michael Carlson, who finished 2nd with a 15.85 time. Carlson also took eighth in the 300-meter hurdles (43.15) to score more points.

In field events, Isaac Davis scored by finishing 8th in the high jump with a 5-08 and he finished 8th in the triple jump.

In the pole vault, Jacob Stearns posted an 11-00 vault to get fifth along with Nico Cipollini, who was awarded 7th for the same height.

Trojans Coach Ed Kirkwood was more than satisfied with how his girls did against Cheyenne.

“The girls swept the hurdles and did a nice job,” Kirkwood said.

In girls field events against Cheyenne, Caeli Havel for the Trojans had another great day.

Caeli Havel filled in for Cassandra Clark who is out on medical.

“She is only a freshman and she is doing well and the important thing is she is getting experience,” Kirkwood said.

Andi Bishop took first in the pole vault (8-00) as the Trojans swept this event. Valentina Colon and Gray posted a 5-06 and a 5-00 respectively.

At the Resler Invitational the Lady Trojans had a good finish with a 9th place showing out of 21 teams.

The next big meet for both teams is against Faith Lutheran, which is April 23 after Clark County Schools have their spring break this week.

Kirkwood feels the meet could go either way and it will be close.

“Faith has gotten better. They have some freshmen and sophomores running some good times. They have a lot of events where they can put two kids ahead of us. We have some events where we can put one or two ahead. It should be interesting because they have people in every event. They had no vaulters last year and now they do and have a girl who has jumped higher than Andi. Same with the boys, their boys can jump just as high as our boys. They are thin in the high jump and they are just tough,” he said.