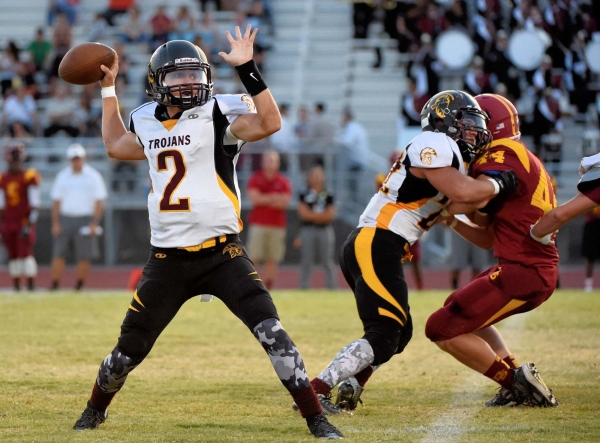 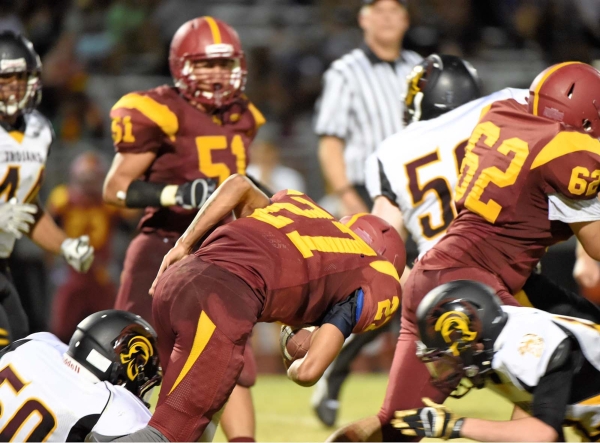 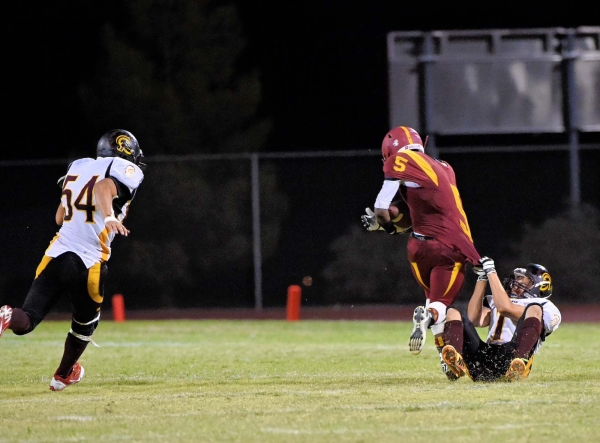 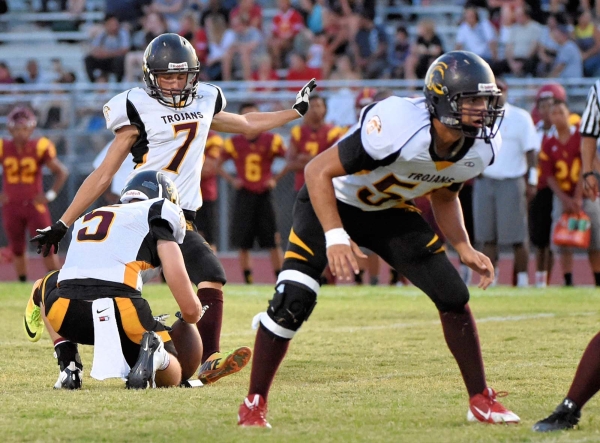 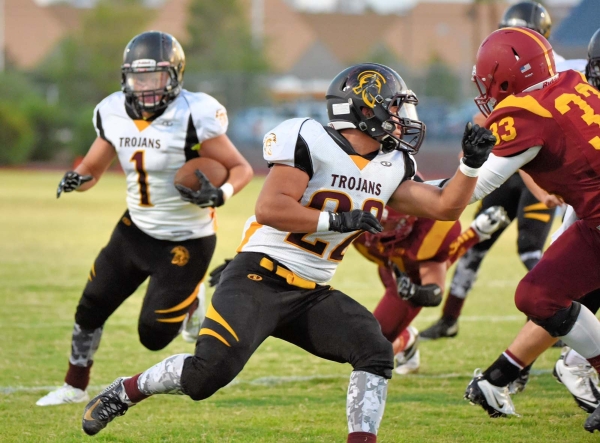 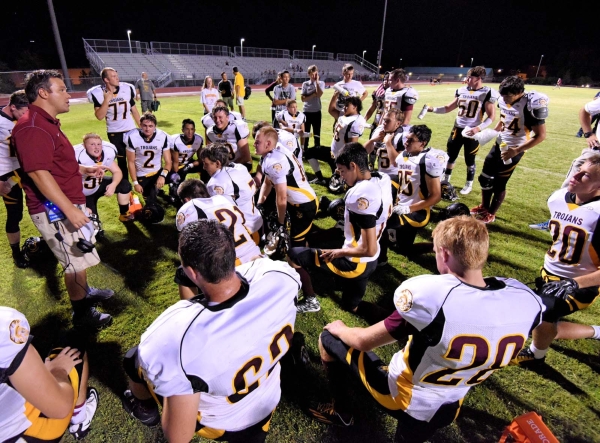 A former UNLV football player now coaching in high school football debuted on Friday night and won. No, we’re not talking about Randall Cunningham at Silverado, but Adam Gent, who has adopted Pahrump as his new home.

The latter may not be a famous football player, but he knows the game and he knows how to win and he did it in a big way last Friday as the Trojans (1-0 overall) trounced Del Sol, 21-0, in Las Vegas.

Pahrump came out with a successful balanced attack through the air and on the ground. The Trojans had 254 yards of offense with 118 yards on the ground and 136 through the air. The defense also deserves some credit causing two fumbles and three interceptions.

The Trojans received the ball in the first quarter and made it look easy on their first possession. In the first series TJ Milk threw a 36-yard pass on third down to Parker Hart that took them into Dragon territory to the 25-yard line. Moments later on third again, Hart found himself all alone in the end zone for the first touchdown pass of the year.

Hart was the leading receiver for the game with 3 receptions for 93 yards.

After the game, he was still calming down.

The Dragon offense was non-existent in the first quarter as they fumbled the ball midfield on their first possession and this led to another Pahrump score. Daniel Kinkade ran the ball in the end zone for the second touchdown to give the Trojans a 14-0 lead after the first quarter.

At the end of the first quarter, defensive lineman Jake Labarbera went down with an injured knee.The game was delayed for nearly 30 minutes as Labarbera needed transport to the hospital and Del Sol didn’t have an ambulance on the field. According to Dr. Michael Taylor of Affiliated Chiropractic, Labarbera possibly dislocated his patella and could return depending on what his doctor finds.

The Dragons tried to respond in their second possession and marched down to the goal line but was intercepted. This would be one of two interceptions on the night made by Pahrump. Riley Sutton had the first one and Devlin Dillon had the second one. Both prevented Dragon touchdowns.

In the first half, the Dragons went down to the goal three times, fumbled, intercepted and ran out of time.

In the second half the Dragons fumbled on the opening drive and then on their second possession late in the third quarter they again got to the red zone of the Trojans and threw their second interception.

The Trojans took over the ball and found themselves once again near the Dragon goal line. Milk scored the last touchdown on a keeper. The Dragons got the ball two more times but the Pahrump defense kept them from scoring.

After the game, Gent praised his players for their efforts and said they made adjustments and that was the key to the win. He said his team had completed the first goal he had set for the team and that was to win the first game.

“I told my team at halftime it’s the next play. I want them always moving on to the next play,” he said. “My assistant coaches made some great adjustments after the half.”

Gent emphasized how tough it was to get a win on the road.

“We kept fighting and our boys battled and it was all heart,” he said. “We stopped them twice on the goal line. It’s tough to win on the road in Vegas. The boys worked hard all week and now it’s time to move on to the next one.”

Milk said after the half the offense had to just calm down. In the second quarter the team just could not make a decent play and this led to a couple of sacks on the quarterback and some penalties at key moments.

“We all calmed down and then we had fun,” he said. “We relaxed. The more we had fun and played relaxed, the better we did.”

The Trojans open at home this Friday against Sunrise Mountain (1-0 overall) who beat a hapless Western, 54-6. Sunrise has won only four games in the past three seasons.