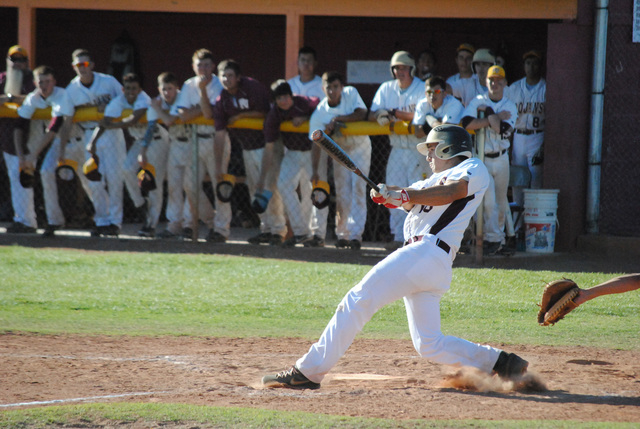 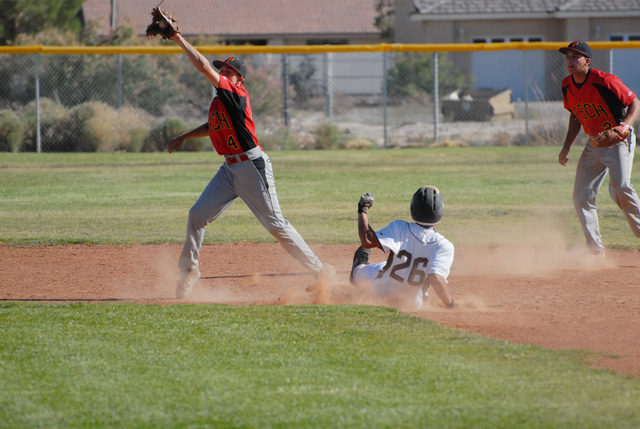 Catcher Carlos Rivera for the Trojans baseball team didn’t wake up saying, “I am going to be the hero today.” He just came to the ball park and played hard.

In the bottom of the 7th inning, he came up to bat with the bases loaded and the game tied with no outs.

“I have never done this before but I thought to myself, ‘The bases are loaded and I am going to get a hit and the winning run.’ I was looking fastball and the infield was in so I knew if I hit it to the outfield it would score a run,” he said.

Fastball indeed — Rivera slammed the ball into left field to drive in Chad Uyeno for the winning run, game over and the Trojans win 5-4 and advance to the next game at Chaparral High School.

This scenario has been a theme for the Trojans all season and Trojans Coach Brian Hayes is loving every second of it. Hayes has said all along his team was a scrappy bunch that had a lot of heart.

“I am proud of these kids and with this group of kids I think anything is possible. I think we are getting to that point where we don’t give up. Last year we had a few games even in a playoff game. We were down and things fell apart a little bit. I was waiting for it. It’s going to come and I told my wife yesterday that we were going to win. We got down and our kids didn’t get down on themselves and they kept playing. That’s what we did in the last inning. We battled and got the Martinez kid off the mound and they gave us the chance to win the game. Martinez was an all-state pitcher,” Hayes said.

The team did not get down and took a hopeless situation and battled back. Tech came up in the top of the 5th inning and drove in two more runs.

The Trojans were down 4-1, but they kept coming at Tech. In the bottom of the 5th they answered with 2 more runs of their own. With bases loaded AJ Segura drove in a run and then Rivera drove in the 3rd run to make the score 4-3.

This set up the win in the 7th. With the Trojans down by 1 run, Dylan Ault hit a double to lead off. Tech intentionally walked Chad Uyeno. Segura hit a single to right field to load the bases for Richard Greene with no outs.

“I just wanted to make contact with the ball. I knew if I hit the ball in the middle it was a run scored and the game is tied up. He threw me a hanging curve,” Greene said.

Greene whacked his ball into the outfield to score. Ault and Rivera did the rest.

The Trojans traveled to Chaparral on Wednesday and lost after tying the game in the 7th by scoring 5 runs. The game went into extra innings and in the 9th inning Chaparral got a break. The lead-off hitter was hit by a pitch. He then stole second base, went to third on a sacrifice and scored on a walk-off single.

Pahrump played Mojave on Thursday too late to report.