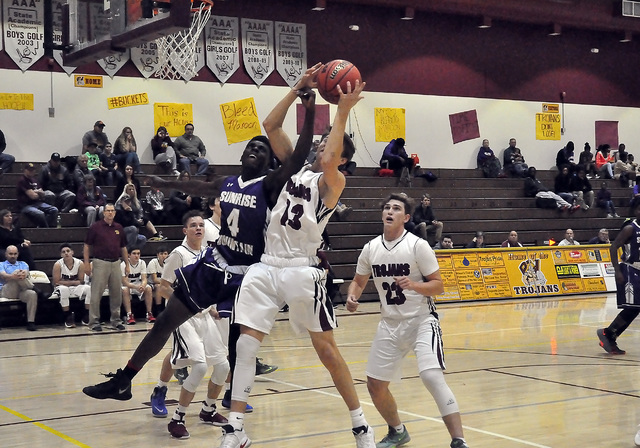 Cory Bergan tries to take the ball to the hoop. Sunrise Mountain did a good job of keeping Pahrump out of the paint. Horace Langford Jr. / Pahrump Valley Times 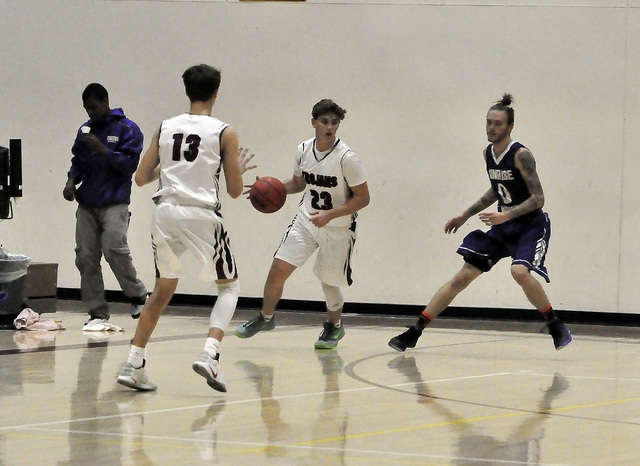 Parker Hart drives the ball toward the key in the first half, when he was just getting warmed up. He sank seven points in the fourth quarter against the Miners on Tuesday. Horace Langford Jr. / Pahrump Valley Times

The Trojans boys basketball team came up short in the fourth quarter and ended up losing a close one to Sunrise Mountain, 53-42.

For the Trojans (5-10 overall, 0-1 Sunset League) it was not a typical second half of play.

The Pahrump defense played tough for four quarters and kept the Miners from making outside shots, forcing them to go inside.

The Trojans have had some weak third and fourth quarters offensively in past games and that’s usually where opponents have won it. But that night was not one of those games. Pahrump scored nine in the third after having a close first half, (22-14) which kept them in the game and then limited the Miners to just 12 points in the fourth quarter and 20 in the fourth.

Trojans coach John Toomer acknowledged that the defensive effort was good, but he still wants his offense to produce more points.

“The element we need more of is scoring,” Toomer said. “That’s why we are not winning the close games.”

The boys have lost five games by 10 to 11 points this season.

Pahrump’s top scorer, Antonio Fortin, had an off night. He usually scores 15.8 points per game and only had four points for the evening.

Parker Hart led the team with 12 points and David Sidhu came off the bench and scored 11. Hart came on strong in the fourth, scoring seven.

Bryce Odegard had a good day of defense, getting multiple steals but paid for it with an arm to the nose in the fourth quarter. Odegard had four points.