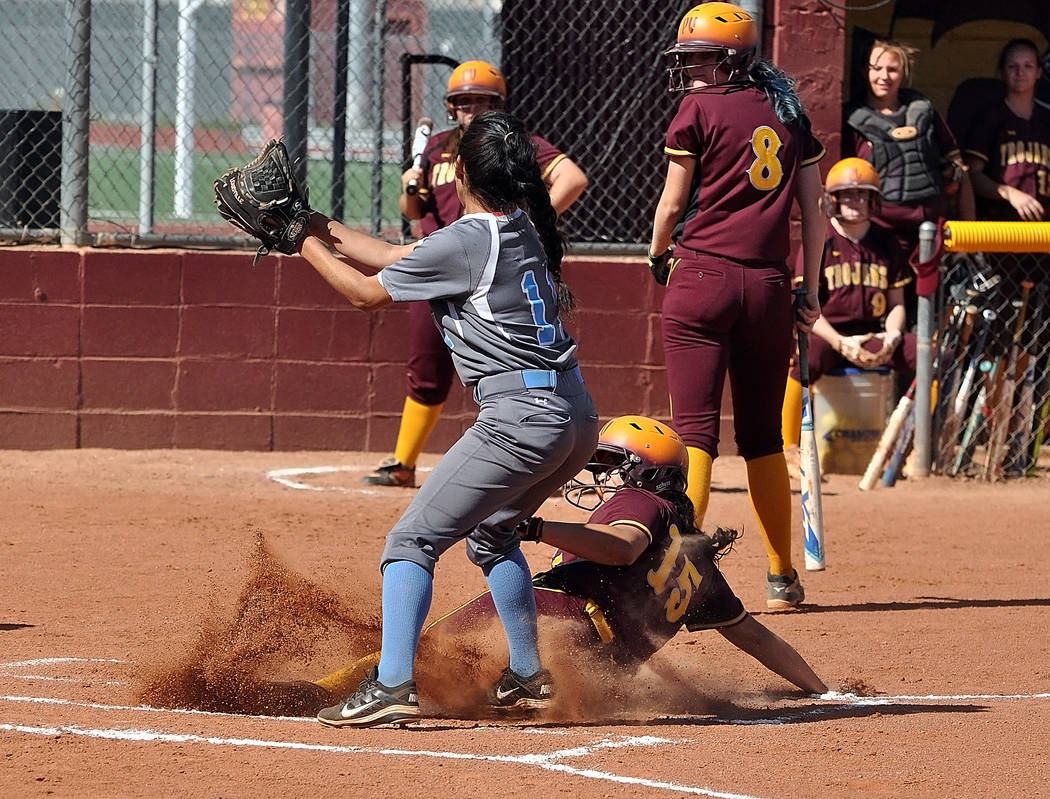 Horace Langford Jr./Pahrump Valley Times Taylor Egan slides safely at home in the game against Western. The Trojans defeated Western 22-7 last week. Egan is one of many talented sophomores on the team.

This season, Trojans baseball and softball may not get as much credit as they deserve because of the lack of competition. The Trojans baseball team has had seven league games with opponents where they won the game by 10 runs or more.

Despite the scores and being undefeated, you will not see either the baseball or softball team in the latest top 10.

Regardless of their competition, both baseball and softball teams are quality teams with quality coaching staffs. Eli Armendariz and Brian Hayes are sticklers for defense. Both coaches are skilled at playing small ball, moving base runners around to keep the pressure on the opponent’s defense. We are blessed to have them both.

The news gets even better. Both teams are young teams. The Lady Trojans lost three seniors and the baseball team lost four. The majority of the players will be coming back.

Of course, the true test is how they will do in state competition. This is where their hitting and pitching skills will be measured.

As I sit and write this, both teams should get by Mojave and go into the playoffs undefeated and the first seed, which means they will have home field advantage in the first part of the regional playoffs as long as they keep winning. The regional title for baseball and softball will be decided on May 13 at Southeast Career Technical Academy at noon. Both teams should make it to the state competition.

Why are we seeing such quality teams now? I feel to answer that you have to look at the youth baseball and softball teams. These teams keep getting better and better and they are exposing our youth to quality competition at an early age. The Pahrump Youth Softball Association and Little League both regularly play Las Vegas teams. Both youth leagues support travel teams where the teams are exposed to tough regional contests.

Softball coaches such as Rich Lauver and Sam Charles dedicate countless hours, taking their travel ball teams throughout the Southwest region for competition. Of course, the Little League is doing the same thing. Hank Maglia, a coach in the Majors division, said the competition between Las Vegas and Pahrump is getting better.

“The Las Vegas kids all play travel ball, and I thought we did well against their Red Sox team that seemed like they were all 17 years old,” Maglia said.

The president of the Pahrump Little League, Lou Banuelos, agrees with Maglia.

“I just saw one Las Vegas kid that pitched and he was around 6-foot-2,” he said. Banuelos said Pahrump is coming along.

He said Caroline Thacker, who does the scheduling, has made some strides in getting more home games for Pahrump. He also gave a pat on the back to coaches Drew Middleton, Jason Sandoval, and Tom Metscher for all building solid competitive teams that could take on Las Vegas.

I feel in the coming years we will be experiencing a renaissance in softball and baseball.