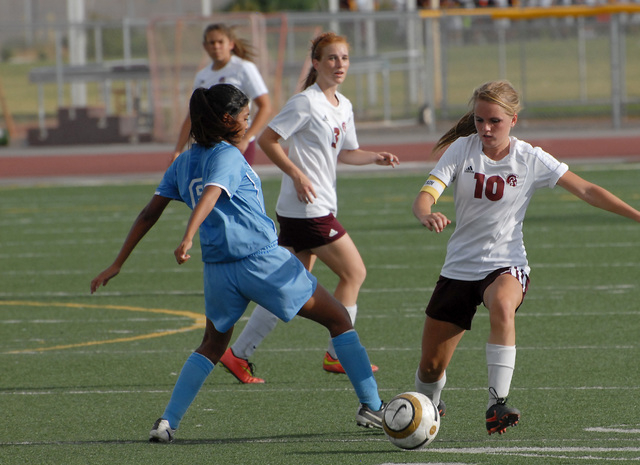 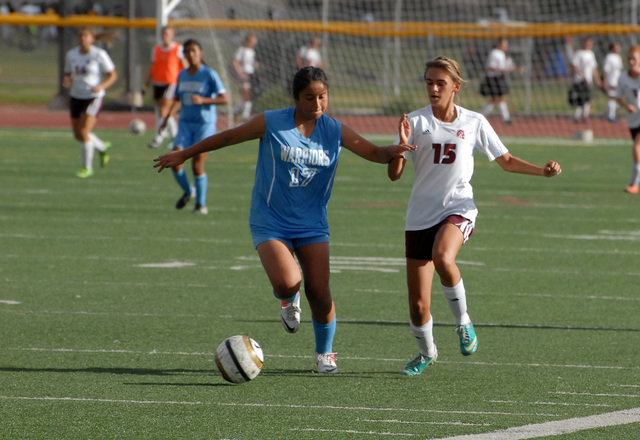 There was absolutely no doubt the Lady Trojans were not going to let this game get away from them. The Trojans were not about to drop a second game and they let the Warriors know that right away. Pahrump triumphed over the Western Warriors last Tuesday 6-0. The Trojans improve to 5-2 overall and 2-1 in league play.

The Trojans were coming off last week’s loss to the Clark Chargers (2-1) and did not mess around with Warriors. They scored early in the first 15 minutes of the game to make it 1-0 on a goal by Sydney Dennis.

The team spent most of the day on Western’s side of the field. After the first goal was scored the Trojans had four more shots on goal and then scored on a pass from Yesenia Garcia to Vaniah Vitto, who put the ball into the net with ease with 16:49 to go in the half.

Paige Chafee scored next at 10:38 left on a solo shot to make it 3-0 and that was the score at halftime.

Chafee scored another one to start the second half and the score was 4-0. Dennis then made it 5-0 on a 25-yard shot that hit the goalkeeper and then went in with 32 minutes to go in the game.

The sixth goal was scored by Western. Yes — they scored on themselves, when Chafee came down and kicked a hard crossing pass that then hit a Western player, who headed the ball into the net for the final score.

Last week Trojans Coach Pam Larmouth said her players had problems with the heat. Tuesday was about 101 degrees on the field, but this didn’t seem to slow the Trojans down.

“Last week we had two players out and only one sub. I think we were a little unprepared for Clark. They came out so strong and that’s our fault. We have to assume everyone is going to come out and beat us. We are experimenting. It is tough playing without Alyssa Turner,” Larmouth explained.

The Trojans have to work with the players that they have. Lately that is not much since Turner is out. That leaves them with just two subs. “We put Paige on the wing. That is her position. She is so much more confident out there. It gives the team more confidence. She sets the pace for us on wing. We have to keep working at it to see what works,” the coach said.

The Trojans play Spring Valley on Monday and Larmouth said not much is known about them.

“I know they scored 3 points against Faith and that tells me they are strong at the top or that Faith is struggling at the back. We have our eye on them and they play Cheyenne on Friday,” Larmouth said.

What is known about Spring Valley is that they lost to good teams last year in a tough Division I Northwest League. They finished 2-8 with the likes of Arbor View and Palo Verde. Spring Valley this year is 0-2 in league, losing close games to Faith and Sierra Vista (3-4).

Turner is still out with a knee injury. She said she was supposed to get an MRI done last week and that did not happen. She did say that she is walking normally on it.

The Trojans defense played a tough game, despite not having Turner. The defense was a big reason why the team beat Western. They didn’t let Western come near the goal. The veteran defense is made up of Brittany Klenczar, Sabrina Lunetto, Ashlyn DiBlasi and Madeline Pereira. Klenczar is filling in for Turner, she normally plays midfield.

“The defense did pretty well today. We have to work a little more on our headers,” Pereira said. She added the Trojans beat Western simply because they did everything better than last week.

Dennis is quickly becoming one of the top players on the team. Like her older sister Sarah, who graduated in 2012, the younger Dennis has played soccer most of her life. “I have been playing for about eight years now. I just started playing year round last year. I really like it and I have improved a lot,” she said.

She said she lives and breathes soccer and that she owes a lot to her older sister. “I have always looked up to her and she has taught me to work hard and helped me with passing and touches. My technical skills come from working with my club team,” she concluded.