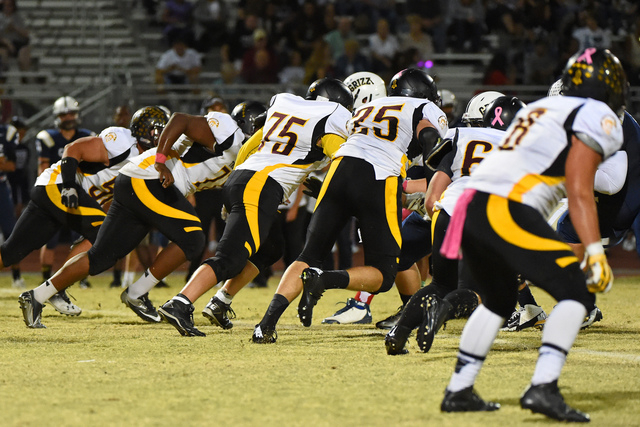 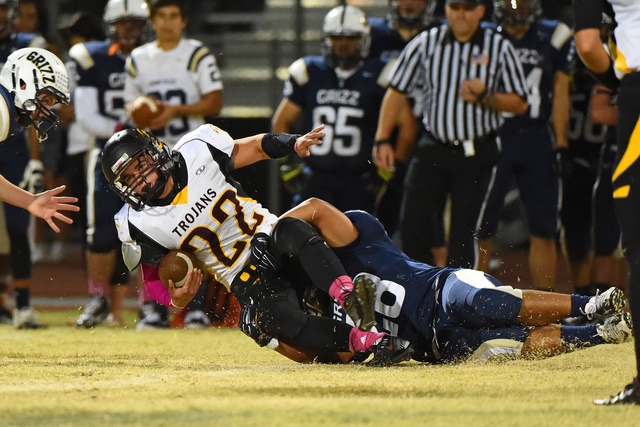 Last Friday night the game was all about defense as the Trojans (3-4 overall, 2-3 Sunset League) lost to the Grizzlies (5-2, 4-1) in a low scoring conference battle 13-7. With the victory, Spring Valley now sits alone at the top in the Sunset League. Pahrump is in seventh place just behind Mojave.

The game went as predicted with both teams not able to produce much offense as the game came down to turnovers. Trojans quarterback TJ Milk had two too many interceptions to the one given up by Grizzlies QB Christian Tasi. The interception by Milk resulted in a 53-yard pick six for the Grizzlies with just 2:31 remaining in the game. If the Trojans had not given up that interception, the game would have been tied at 7-7.

For the Trojans, their only touchdown came in the fourth quarter on a Milk to Devlin Dillon toss for 12 yards, which resulted in six.

Overall, the Grizzlies were able to stop the Pahrump rushing attack by allowing only 54 yards. The Trojans managed another 60 yards in the air for a total offense of 114 yards.

Spring Valley scored their only offensive touchdown in the second quarter on 6-yard pass reception.

Trojans Coach Joe Clayton was pleased with the team’s hard work and told his team after the game to keep their heads up and to look to the next game.

“You know, the guys played really well. Obviously it was very similar, or almost similar, to the Clark game, where our defense was hanging us in there,” he said.

“The defense just played phenomenal tonight — you can’t say enough about it. They gave up seven points (to Spring Valley). To hold them to thirteen points with them being one of the big six, I can’t complain about that defense. Again, our defense was phenomenal.” Clayton argued that Spring Valley could be the next league champions.

After such a defensive game, it’s hard to believe Pahrump’s defense gave up 50 points to any team.

As for the offense, Clayton added that his offense could not make the first downs against Spring Valley and this prevented his team from getting in rhythm.

“Our offense needs to move the ball and get us first downs, and obviously to get the scores … we were held to seven points and we don’t usually get held there,” Clayton said.