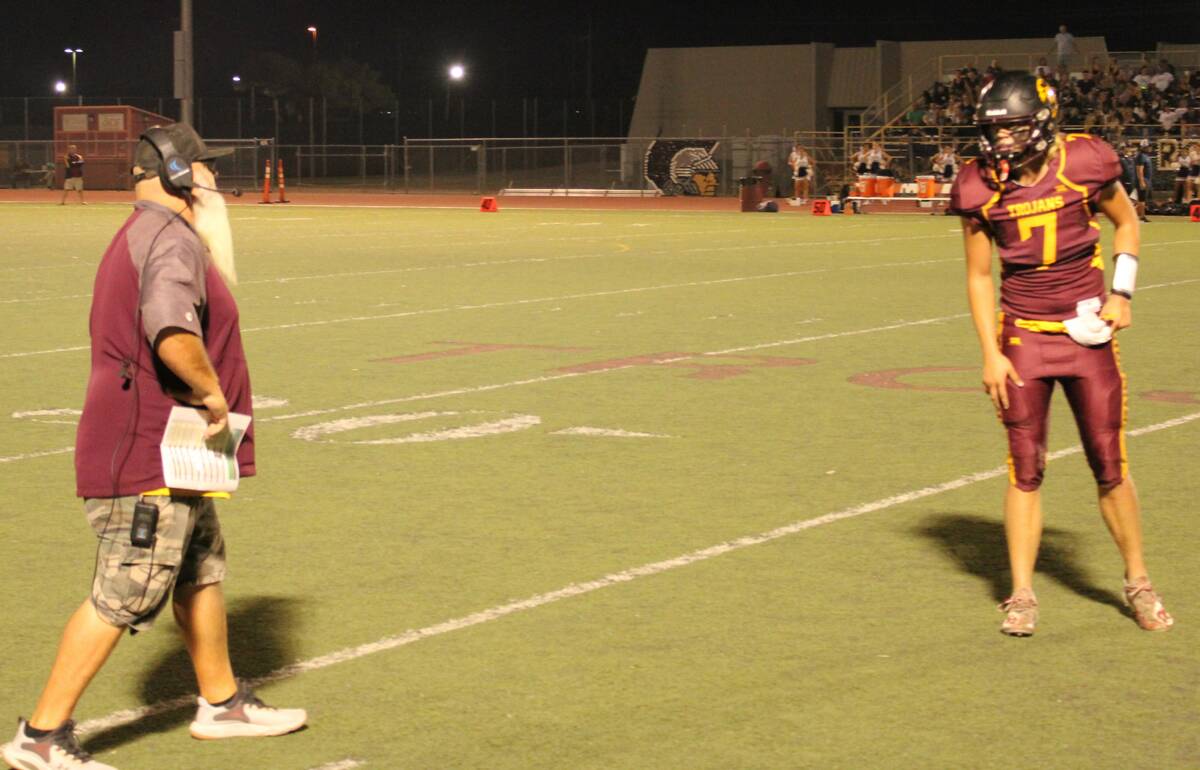 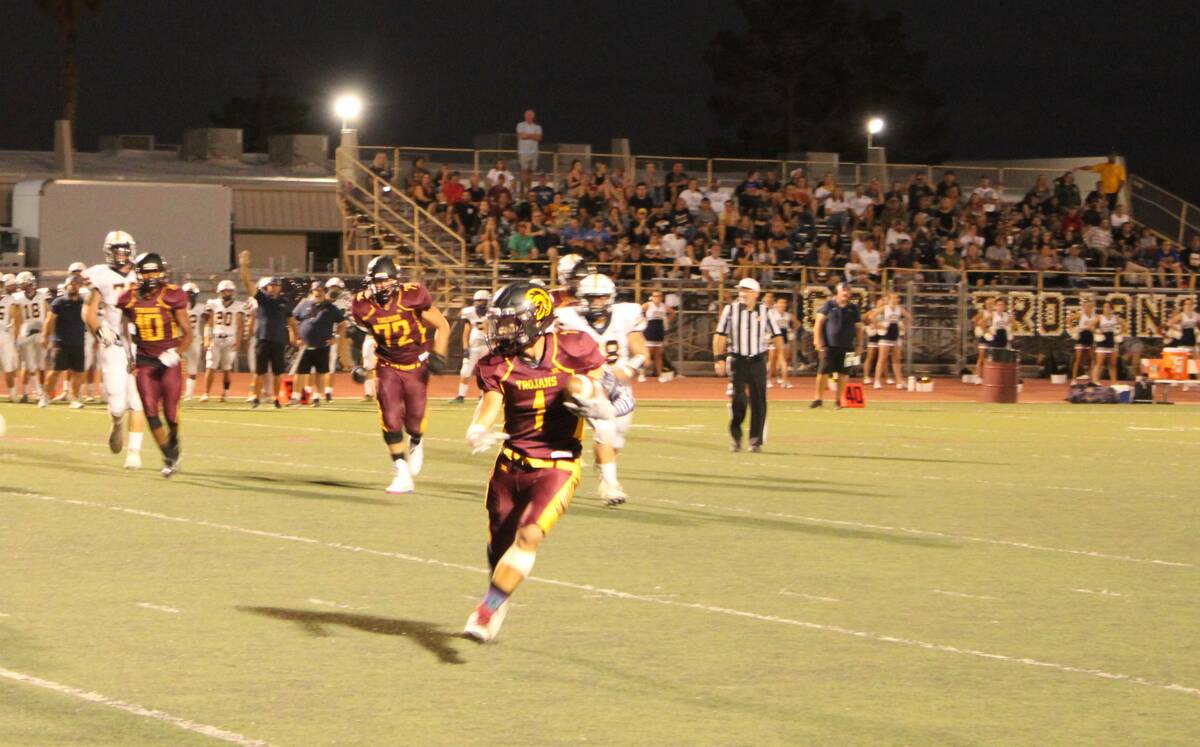 Danny Smyth/Pahrump Valley Times Junior running back Brennen Benedict (1) takes in a 12-yard pass for a touchdown in the first quarter of Pahrump Valley's 28-25 loss to the Boulder City Eagles on Friday, Sept 23. 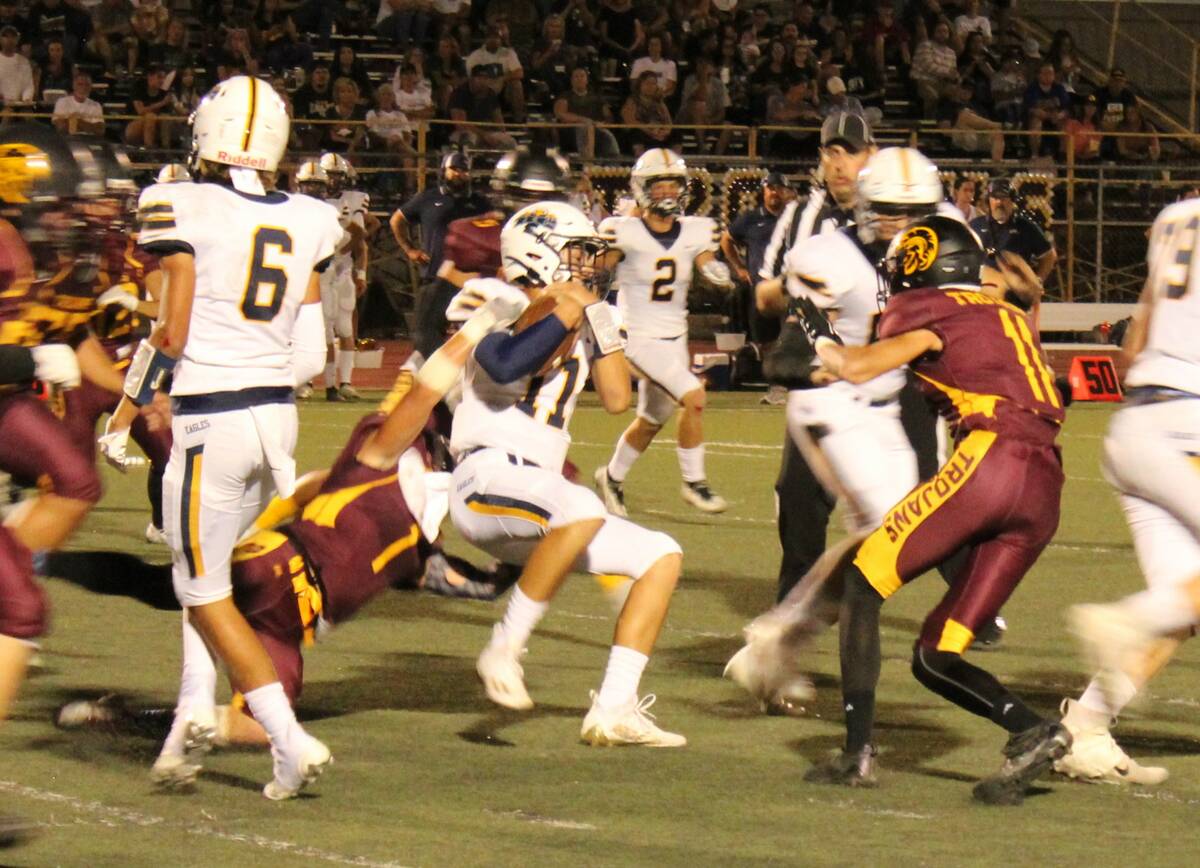 Danny Smyth/Pahrump Valley Times Brennen Benedict (1) makes a tackle against Boulder City's quarterback during the Trojans' loss to the Eagles on Friday, Sept 23. 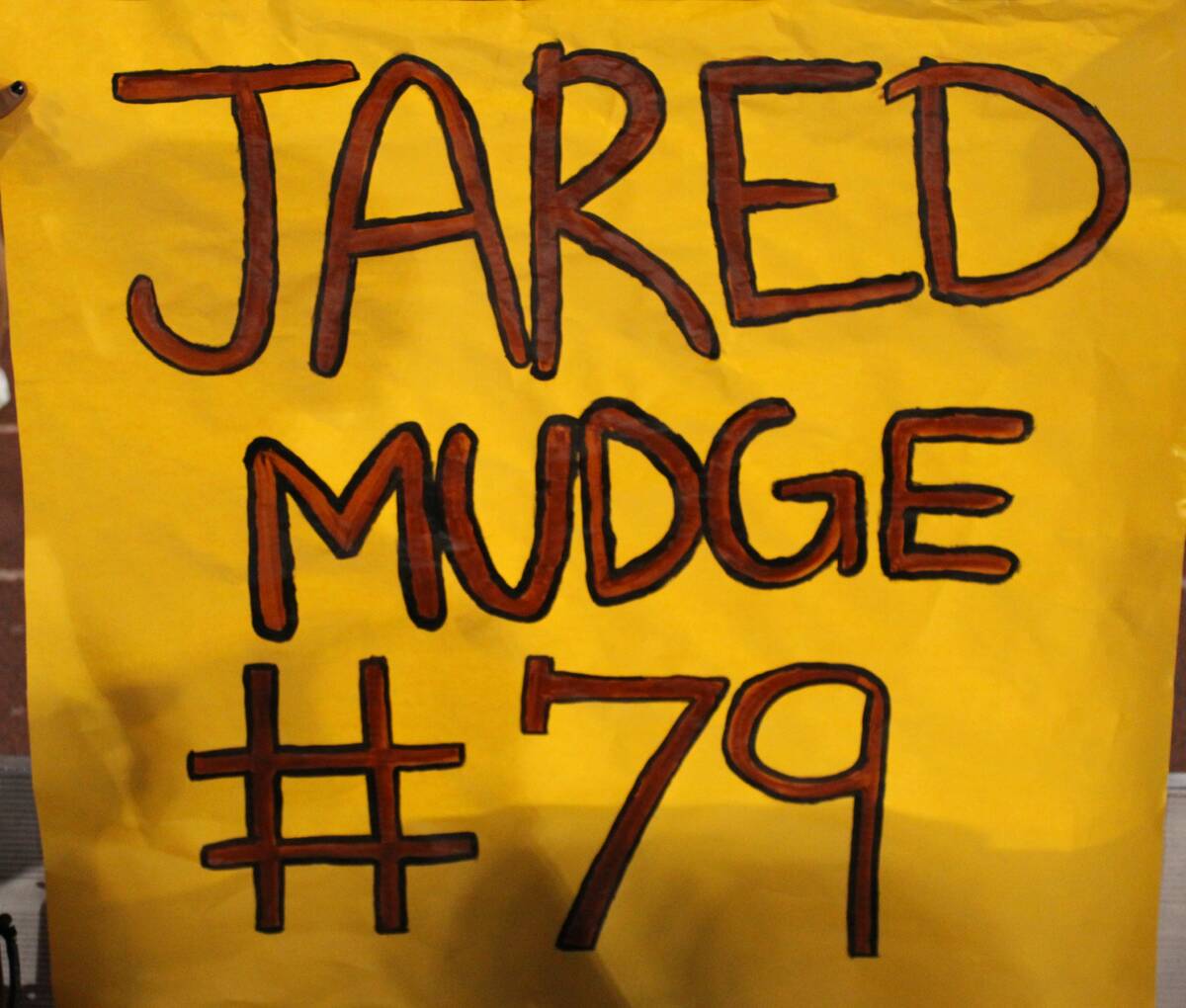 Danny Smyth/Pahrump Valley Times Pahrump Valley High School held a moment of silence before the game to honor the life of former student and PVHS football player Jared Mudge, who passed away due to complications from appendicitis. 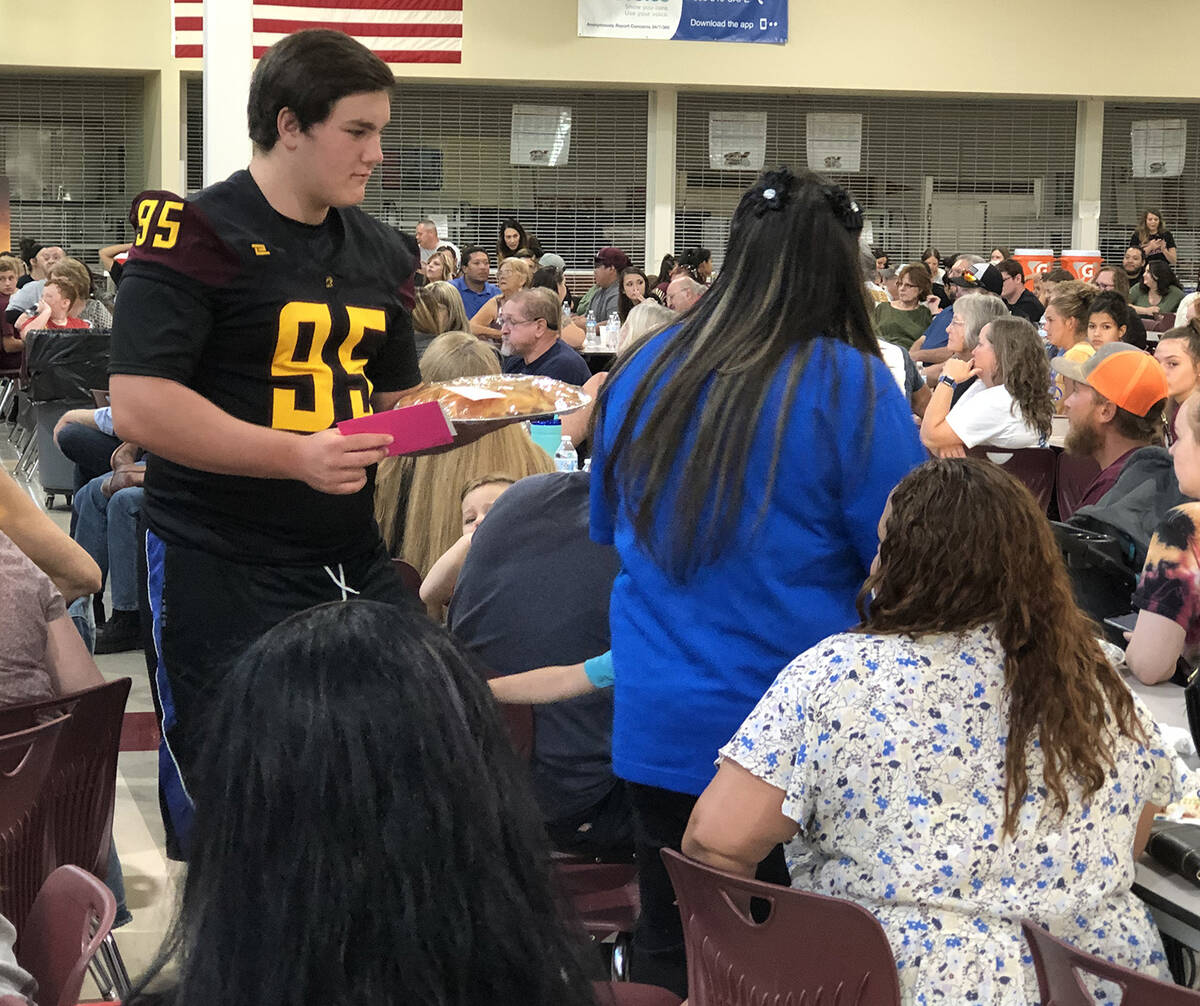 Pahrump Valley Times file photo Jared Mudge at a dessert auction at PVHS in 2019. Mudge passed away last week at the age of 19 due to complications from an appendicitis attack. Mudge played football for the Trojans before moving down to Arizona to play football in 2020. The Trojans held a moment of silence for him at Friday's game.

The Pahrump Valley Trojans were defeated at home in their first league game of the season by the Boulder City Eagles, 28-25.

The Trojans came into the matchup with a 2-2 overall record, having just lost to Moapa Valley and looking to get back on track.

Before the game began, Pahrump Valley High School held a moment of silence for Jared Mudge.

Mudge passed away last week at the age of 19 due to complications from an appendicitis attack. Mudge played football for the Trojans before moving down to Arizona to play football in 2020.

While at his high school in Arizona, Mudge won a state championship during his senior season.

Once the game had started, Pahrump Valley got off to a great start. They marched down the field on their first drive, capping it off with a 12-yard touchdown connection between senior quarterback Scott Oscarson and junior running back Brennen Benedict.

This would be the first of two touchdown connections between the two Trojan players.

Pahrump Valley would hold their 7-0 lead going into the second quarter, but the Eagles would tie the game on a 3-yard touchdown run by senior running back Hunter Moore.

Moore finished the game with 23 rushing attempts for 115 yards and the one touchdown.

After a quick three-and-out by the Trojans offense, Boulder City got the ball back and marched back into Trojan territory. They would end the drive with a 19-yard passing touchdown by junior quarterback Jacob Bryant.

Bryant ended the day completing six of his seven pass attempts for 112 yards and two touchdowns. He was very efficient throughout the game.

Oscarson would take over the game on Pahrump’s next possession.

He led the team down the field with his passing and running abilities. Midway through the drive, Oscarson had dropped back to pass in Boulder City’s territory. After the pocket collapsed, he scrambled downfield for a 12-yard run to keep the drive going.

“Offensively, this is probably our best game against a good team,” Trojans head coach Thom Walker said. “And I thought Scott Oscarson, he played outstanding. Running the ball, throwing the ball. He had a really good game.”

On the very next play, Oscarson ran the ball again for another big game.

He finished the night with 39 rushing yards, 78 passing yards and two passing touchdowns.

Following Oscarson’s second big run of the drive, senior running back Cole Venturo would take the ball in for a Trojans touchdown, giving them a 14-13 lead going into halftime.

Usually, when a team scores just before halftime, they tend to take over momentum in the game and carry it into the second half.

However, Boulder City did everything they could to eliminate Pahrump’s momentum.

On their first drive out of the half, the Eagles took the lead for good on a 54-yard touchdown pass from Bryant to senior running back Bruce Woodbury.

The Eagles would add another touchdown before the end of the third and went into the final quarter of the game with a 28-17 lead.

Boulder City was able to hold on to the ball for nearly eight of the 12 minutes in the fourth quarter, giving Pahrump just two possessions in the quarter.

After getting the ball back with less than two minutes left and facing an 11-point deficit, the Trojans were able to zoom down the field and score a touchdown with a 2-point conversion in just 44 seconds.

Unfortunately, the Trojans weren’t able to get the ensuing onside kick, coming up short in their comeback attempt.

The Trojans will hit the gridiron again this Friday, Sept. 30, when they travel to Las Vegas to take on the SLAM Nevada Bulls.

Both teams will be entering the contest with identical 2-3 records. This will be the first league game of the season for the Bulls.

Kickoff is scheduled for 6 p.m.