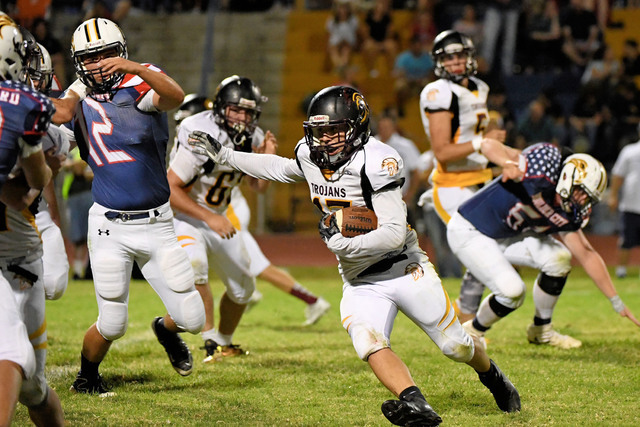 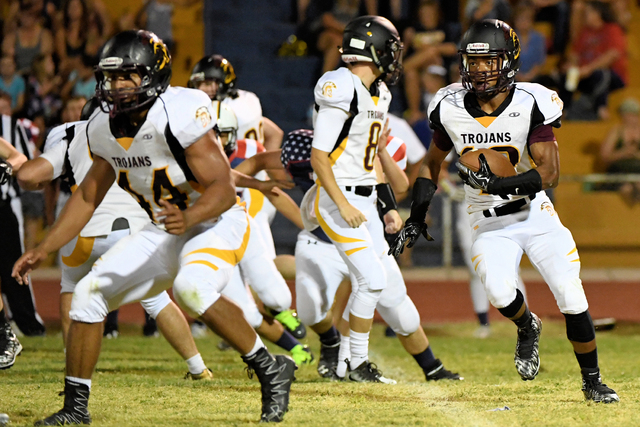 Peter Davis / Special to the Pahrump Valley Times Nickolas Redmond carries the ball in the 35-6 victory the Eagles.

“It was good to finally get the monkey off our backs,” Trojans football coach Joe Clayton said. “We were aware that we hadn’t had a win against them in a long time. We have gone into games with Boulder City with some good teams and have always fallen short. We were elated to win this one, and it felt good.”

Pahrump (2-1 overall, Sunset League) beat the Eagles on the ground and used 10 rushers to run all over Boulder City for 207-yards rushing out of 254 yards of total offense.

Jesse Dillon led the rushing attack, with 47 yards and two touchdowns. Dillon scored the first touchdown with 9:15 to go in the first quarter and again in the fourth on a 23-yard TD run.

Case Murphy also had two TDs, his fourth TD of the year, one rushing and a 55-yard fumble recovery.

Nico Velasquez scored the other rushing TD on a 10-yard run, his fourth of the year.

Clayton said he has his go-to backs but likes to spread out the run game.

“We have a small team and so our wings basically run by committee, and this gives our fullbacks and running backs some rest,” he said. “The rest is needed because our boys play both sides of the ball.”

It was another good outing from the Trojans defense as they shut down the Eagles, limiting them to 36-yards passing and just 96-yards rushing.

For Pahrump, the win was redemption for the loss to Del Sol.

“I think our team looked past Del Sol,” Clayton said. “I told them five turnovers is not going to win; we’ve got to take care of the football.”