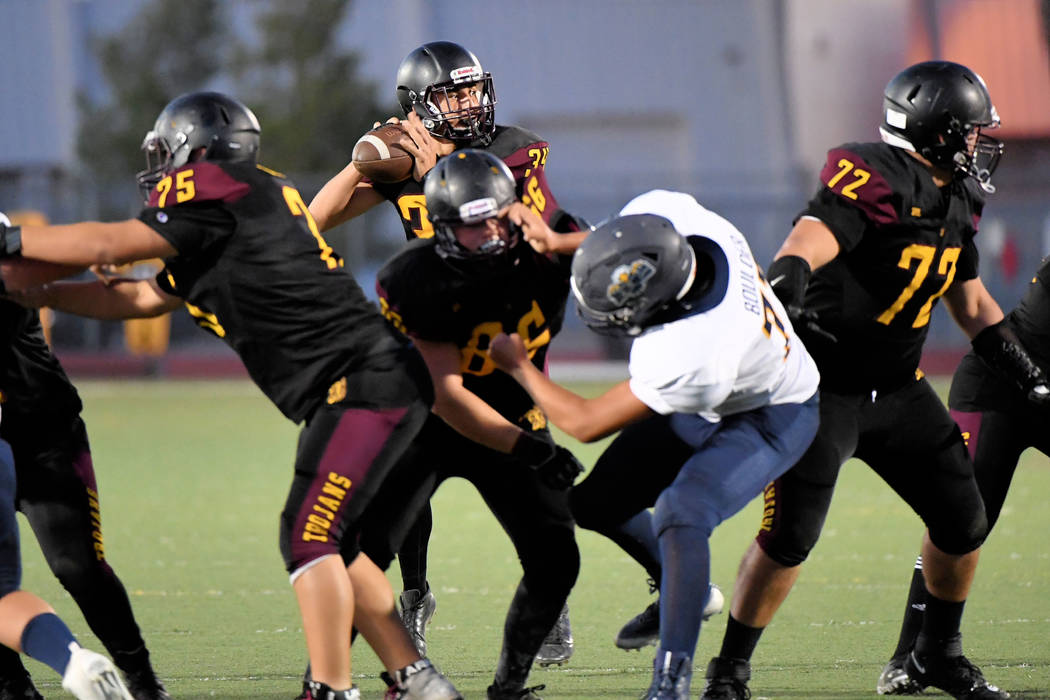 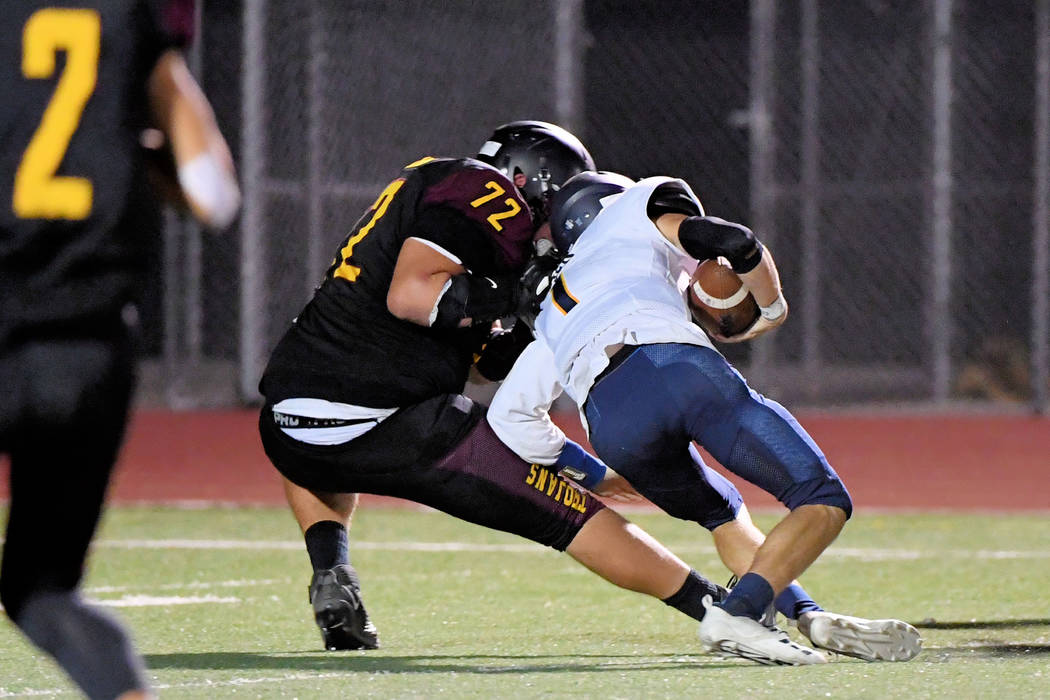 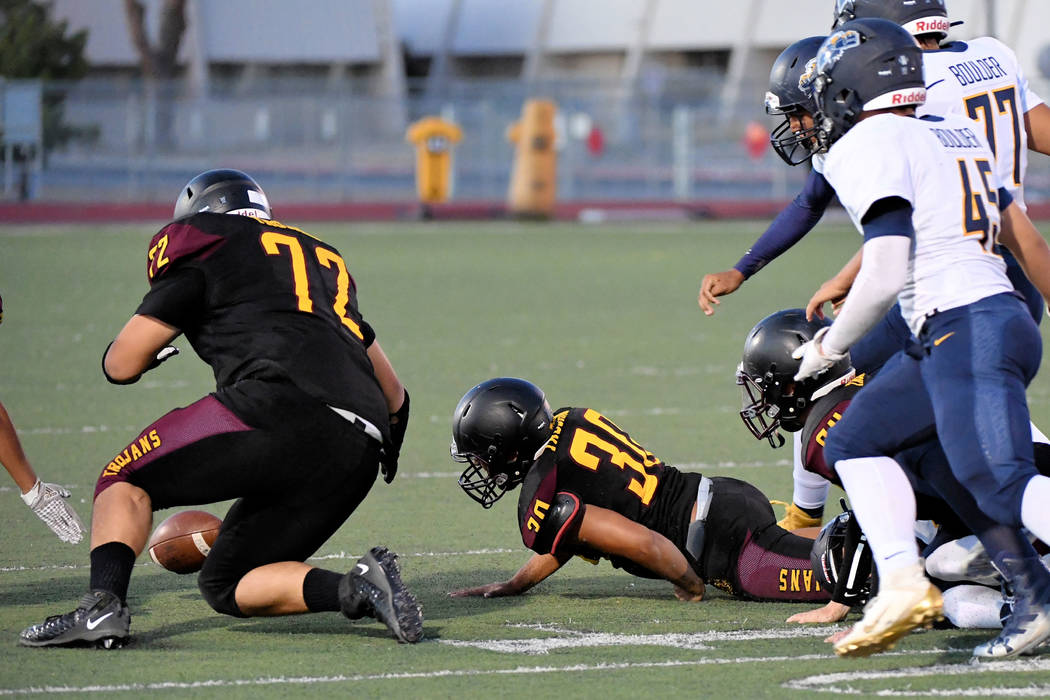 Peter Davis/Special to the Pahrump Valley Times Caleb Sproul (72) and Fabian Soriano (30) react to a fumble during the first half Friday night.

The 20-18 loss to Boulder City on Friday night was not the worst news for the Pahrump Valley High School football team in the past week.

“We got some bad news yesterday,” Pahrump Valley coach Joe Clayton said Tuesday morning. “He has to have surgery. I just felt bad for the kid. There’s obviously a tear that needs to be surgically repaired.”

You can’t replace McGhee, who was an integral cog in the Trojans’ rushing machine, but other injury news was not as bad for the already-thin roster. Jacob Lopez could be ready for Friday night’s game at Coronado; Jacob Buys, who was hurt against Boulder City, might not miss any time; and Tony Margiotta is on track to be back in time for the start of Sunset League play.

“For whatever reason, he’s a miraculous kid,” Clayton said of Margiotta, who suffered a ligament injury against Virgin Valley. “He actually sprinted and ran with the guys yesterday. As long as he’s conditioned, especially with the bye week next week, it looks like he’ll be ready for league.”

Clayton said Buys twisted his knee but looks like he’ll be ready for Coronado, while Lopez is “a little sore, not quite 100 percent.”

Blaming the officials is often a distasteful way of shifting blame for a defeat, but what do you make of it when both coaches are not just irritated by enraged by the way the game was called?

Clayton said he and Boulder City coach Chris Morelli agreed after the game that the officiating had been “not lopsided” but “atrocious.” Pahrump Valley was flagged 12 times for 87 yards — the yardage deflated by the fact several of them were half-the-distance markoffs near the goal line — while Boulder City “committed” 14 penalties for 100 yards.

But Clayton was particularly angry about the number of holding calls against his team, penalties he said had no basis in fact. Twice, the Trojans were hit twice on the same drive twice with holding penalties. The second drive was devastating, as the Trojans were penalized on consecutive plays after taking over at the BC 20 after a fumbled pitch. Despite the short field, the Trojans were turned back when a fourth-down run was stuffed by the Eagles for a 2-yard loss.

And don’t get Clayton started on the ineligible receiver non-calls, which he said the game films verified should have been flagged.

In a nutshell, while both sidelines went berserk over the officiating, the key calls hampered the Trojans’ offense and the key non-calls aided the Eagles’ offense. Suddenly, losing by only 2 points seems to be a miracle.

Baby steps through the air

Pahrump Valley sophomore quarterback Roman Roberts, in his second start of the season, misfired on his first pass and tossed an interception on his second. Undaunted, Roberts found an open Andrew Avena down the middle for a 31-yard gain on a drive that took the Trojans from their own 32 to the Eagles’ 5 over 6 minutes, 4 seconds of the third quarter. On the same drive, Roberts hit Dylan Wright for 10 yards to erase a 9-yard loss on first down deep in Boulder City territory.

“As he gets more experience, knowing he’s got a decent arm and he’s very accurate, hopefully we can incorporate play-action a little bit,” Clayton said.

Not surprisingly, with former quarterback Dylan Wright on the field, the halfback pass found its way back into the Pahrump Valley playbook. Wright hit Avena for 10 yards once, but on another occasion the Eagles were ready for it.

“We tried the one time, and they were prepared for it,” Clayton said. “They got it covered really well.”

The Trojans and Eagles each showed some serious short-yardage defense after halftime.

First it was the Eagles, who, after the Trojans marched 63 yards got a stop on fourth-and-goal from their own 5 when Dylan Wright was tackled for a 1-yard loss. Early in the fourth quarter, the Eagles fumbled a pitch to give the Trojans the ball on the BC 20. Two holding penalties slowed Pahrump Valley, but Boulder City again came up big on fourth-and-5 from the 15, pushing the Trojans back for a 2-yard loss.

Then it was the Trojans’ turn on what would have been a game-saving play, had the ending gone differently. After their fourth-down stop, the Eagles put together their best drive of the night, motoring 82 yards to the Trojans’ 1.

The last two plays of the drive did not go quite as well. On third-and-goal from the 6, BC quarterback Parker Reynolds scrambled to his left and almost turned the corner, but he was shoved out of bounds at the 1 while trying to stretch his arm to get the ball to the pylon. Some on the BC side thought he was in, and there were rumblings about “getting screwed like last year.”

On the next play, Reynolds tried a sneak into the line, and the Trojans were all over it. While it took the officials several minutes to decide where, in fact, the play ended, eventually the ball was spotted at the 1, and the Trojans took over with 43.9 seconds left in the game.

Then there were the ultimate short-yardage plays: 2-point conversions. For the second year in a row, Pahrump Valley played a game in which only one conversion was successful in a 2-point loss. Last year it was Virgin Valley combining with the Trojans to go 1 for 8 on conversions. This year, it was the Eagles and Trojans going 1 for 6.

“I think what happens is defensively they can be a little bit more aggressive, knowing the worst-case scenario is they’re giving up two,” said Clayton, referring to the fact a defense won’t be burned for a big play on a conversion. “They can bring a lot more pressure at the point of attack where they might be a little bit more hesitant at midfield.”

Did he or didn’t he?

When Reynolds stretched to try and get the ball into the end zone on that third-down scramble, many on the Boulder City side thought he made it. The rumblings about “getting screwed like last year” referred to a play on which then-senior Thorsten Balmer was ruled short of the end zone when, after they spotted the ball, the ball appeared to be touching the goal line.

Tom Grossell, who works on the chain gang on the visitors side, was able to move away from the sidelines and over behind the end zone because chains aren’t needed on goal-to-go situations, and he had a slightly better view than the folks on the sidelines or in the stands.

So did Reynolds get in?

“No, not even close,” Grossell said.”But I thought (Balmer) got in last year.”

The difference, of course, is that the Eagles scored on the next play last year but were stopped on fourth-and-goal this time on the next-to-last play in regulation.

“As thin as we are we have to be a little bit more creative than everybody else,” Clayton said. “We’vre taken his defensive reps away, and he’s given us a little more offensively.”

Peugh carried 14 times for 57 yards against Boulder City and went into the game averaging close to 5 yards per carry.

A frustrating, controversial loss to a longtime rival on homecoming does not lead to happy, peppy people. But Clayton said his players have reacted well to both that loss and a second consecutive 1-3 start.

”It’s the first time in a loss as tough as that that my entire staff was just so excited about how well they played, considering all the obstacles they had to overcome,” Clayton said. “We’ve been telling the boys how tough our nonleague schedule is and how it’s going to prepare us for league. They’re starting to understand it’s only going to make us better as we get healthier.”

Let’s take a look at that nonleague schedule.

Lowry, which was awful the two seasons before 2018, has turned things around. After squeaking into the playoffs last year, the Buckaroos are off to a 4-0 start, following up their come-from-behind win over Pahrump Valley with victories over Sparks (25-7), Spring Creek (21-20) and Fernley (34-28).

SLAM Academy, a relatively new program, figured to be the weakest link in the schedule, and the Bulls are 2-2, beating Class 2A Calvary Chapel and California’s Silver Valley in addition to a 42-14 loss to Del Sol.

Boulder City is 2-1 with a loss to Class 4A Cimarron-Memorial and a 12-7 win over Cheyenne.

This week’s opponent, Coronado, is 2-1, losing its opener to Foothill of Santa Ana, California, before defeating Moapa Valley (9-8) and Sunrise Mountain (58-0).

Add it up and that’s 13-4. Take away the games against Pahrump Valley and it’s 10-3. It would appear Clayton has a point.

Tony Margiotta could be back. Jacob Buys and Jacob Lopez should be full strength. There is an off week after the Coronado game. The Trojans can see themselves being as ready as they can be for the start of league play, and the tough nonleague schedule is partially designed to get them prepared for that.

The Trojans’ first league foe will be Cheyenne, and at this early point it looks as if that game could decide the league title. The Desert Shields are 3-1, and while they haven’t faced the quality of schedule the Trojans have faced, they have shown they can score points in wins over Eldorado (54-14), Rancho (43-7) and Cimarron-Memorial (29-23). The loss? None other than Boulder City, which defeated Cheyenne 12-7 in Week 2 in Las Vegas.

Everybody else is either 1-3 or 1-2. And the Sunset teams’ wins have come against Class 2A Calvary Chapel, perennial bottom-dweller Rancho, and those Bulls from SLAM Academy.

Without depth — and without McGhee — nothing will come easily for the Trojans. But if they have everybody else healthy for the start of league play, the goal of defending their Sunset title is not out of reach.