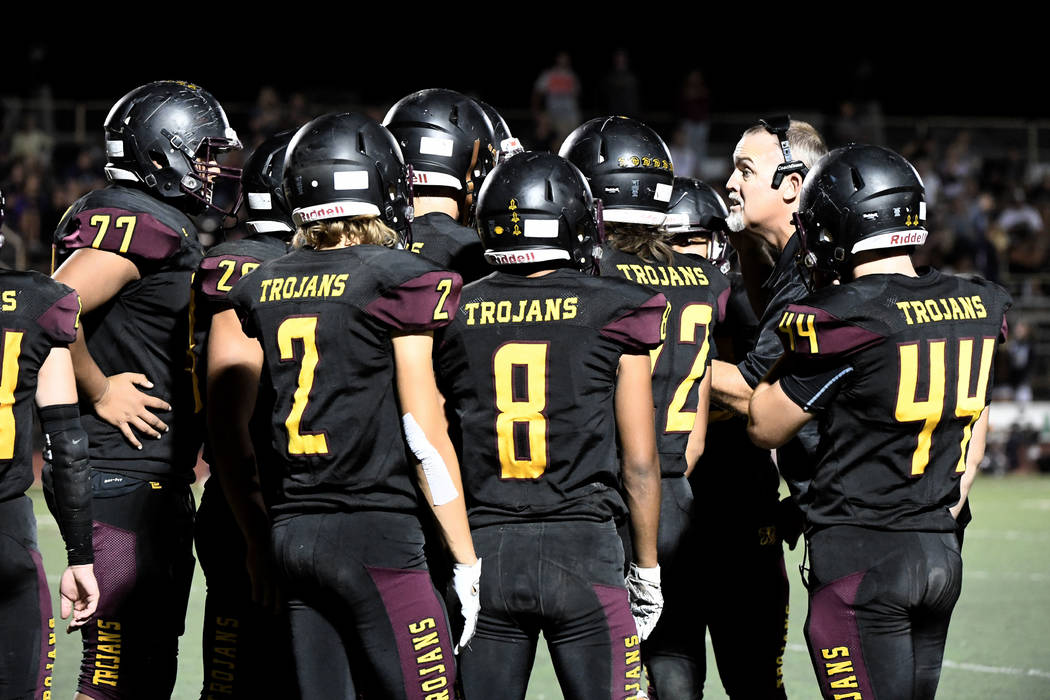 ■ Outlook: Del Sol is coming off of a 49-0 rout of Western, although not much can be gleaned from beating the Warriors. Perhaps a better gauge would be common opponents: Each team has defeated SLAM Academy (Pahrump Valley 32-14, Del Sol 42-14) and lost to Virgin Valley (Pahrump Valley 20-0, Del Sol 28-27).

The Dragons are led by dual-threat quarterback Damani Wilks. The 6-1, 160-pound senior has rushed 58 times for 631 yards and 7 touchdowns while completing 51 of 89 passes for 631 yards and 6 touchdowns with 7 interceptions. Wilks (11.27), Rich Biago (10.33) and Sheik Fofanah (9.52) have strong yards-per-carry averages. All three rushed for more than 100 yards in a 57-27 win over Sunrise Mountain, while Wilks rushed for 179 in the Western game. Trojans coach Joe Clayton says his base defense is well prepared to face Del Sol’s offense, which is more akin to a spread than the offenses of most of Pahrump Valley’s opponents this season,

The player most on the Trojans’ minds is linebacker Bryan Juarez. “We’re very focused on working on him,” Trojans coach Joe Clayton said. “We had a tough time with him last year, and he’s a senior now.”

The Dragons are surrendering an average of 27.5 points per game against teams with a combined record of 18-19. The Trojans have done worse, allowing 29.8 points per game, but their opponents have combined to go an impressive 26-13. Clayton has been telling his players over and over about the quality of Pahrump Valley’s opponents, and the rigorous schedule could begin to pay dividends tonight.

■ Did you know?: Del Sol led last year’s game 14-7 early in the second half, but the Trojans played their game to wear down the Dragons. A ground game that racked up 305 yards — 138 by Casey Flennory — was devastating, and a 69-yard TD pass from Dylan Wright to Joey Koenig highlighted the 27-14 win.

■ Coach Clayton says: “Del Sol is absolutely beatable. … This is the absolute turning point in our season. This is absolutely the biggest game these boys have had in a long, long time. Winning here could catapult us into the No. 2 seed (in the Sunset League).”