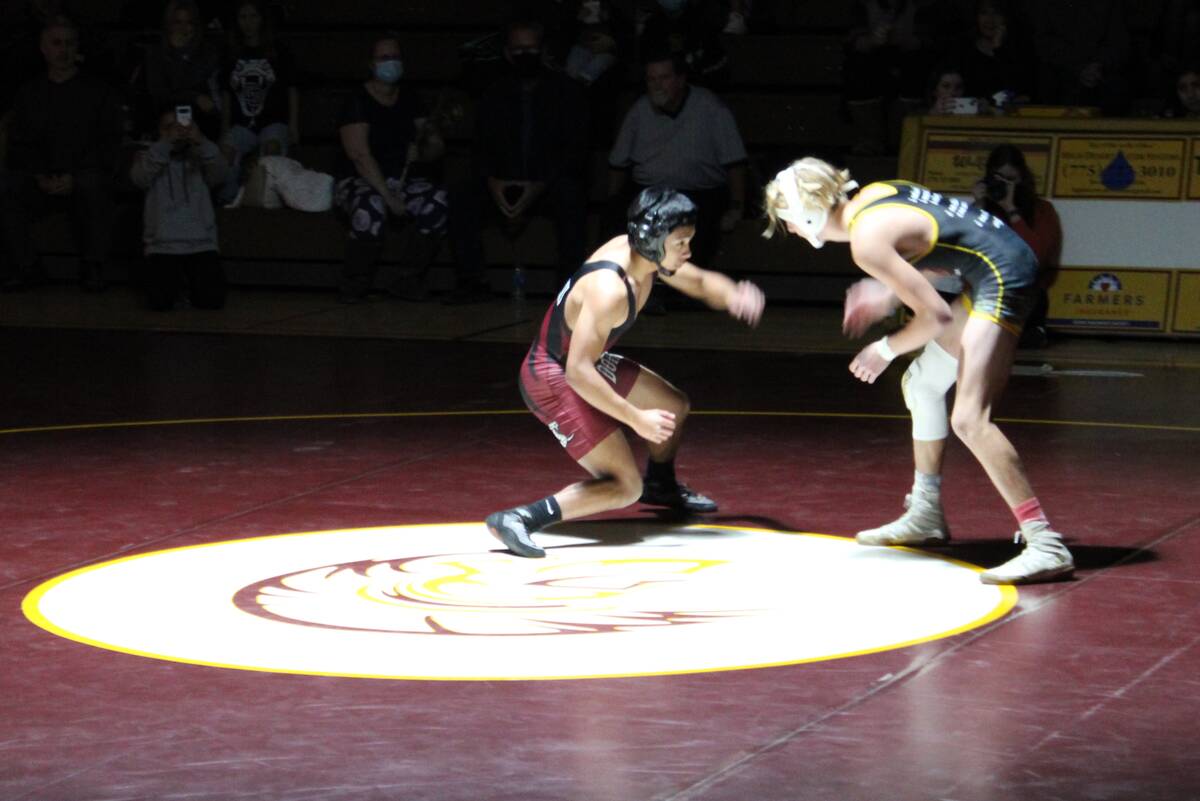 Danny Smyth/Pahrump Valley Times Pahrump Valley Trojan wrestler Gunner Cortez (right) waits to make his move before getting the first-round submission win against his Desert Oasis opponent in their match on Wednesday, Jan. 19, 2022.

Among them were Chris Vega and Coby Tillery. Each won their wrestling matches by way of pin fall.

Tillery finished with two first-round pins, including a 28-second pin against his opponent from Del Sol.

The Trojans defeated the Dragons of Del Sol by a score of 78-6. Many of Pahrump’s wins against the Dragons came by way of forfeit due to Del Sol not having available wrestlers in all of the weight classes.

However, of the ones that did wrestle, Pahrump Valley won by pin fall in each matchup except one, which was the only win for the Dragons.

In their second matchup of the night, the Trojans faced off against the Diamondbacks from Desert Oasis.

The Diamondbacks had wrestlers in all available weight classes except for one, so there was only one forfeit win for the Trojans in this round.

The Trojans won all of their matchups except for two. One of these finished in a pin-fall loss and their other finished in a decision loss by a score of 3-2.

Senior Henry Amaya of the 152-pound division had the only decision loss of the night for the Trojans. He was involved in a very heated, back-and-forth battle against his Desert Oasis opponent.

The score was 3-0 for the Diamondbacks wrestler before he was called for back-to-back delayed penalties, giving Amaya his two points.

In the final moments of the match, Amaya tried getting in an advanced position, but his opponent was able to prevent him from making any offensive moves.

Amaya finished 1-1 on the night after getting a win via forfeit against the Dragons.

Ty Hanks had the two most exciting matches of the night for the Trojans. He won both of his matchups by way of pin fall, but won them each in very different ways.

In his first matchup, Hanks won with the fastest pin of the night in just 26 seconds of the first round against his opponent from Del Sol. Before I could even finish writing down his name he had already gotten his opponent in a pinning position.

In the second matchup against his opponent from Desert Oasis, Hanks would need nearly the entire clock to get the win. Hanks had fallen behind his opponent early, but was able to battle back and take the lead on the scoreboard in the third round.

With just 31 seconds left in the match, Hanks was able to get top position on his opponent to get the pin-fall victory.

Watching both of the team’s benches, you could tell that each school really wanted the win. At one point, just before the pin, almost every Trojan wrestler and coach were standing up to cheer and yell for Ty. Once he got the victory, the entire gym erupted in excitement.

Pahrump Valley got the victory over Desert Oasis by a score of 78-9.

The Trojans’ next event will take place Jan. 21 and 22 when they participate in the Chaparral Invitational at Chaparral High School.