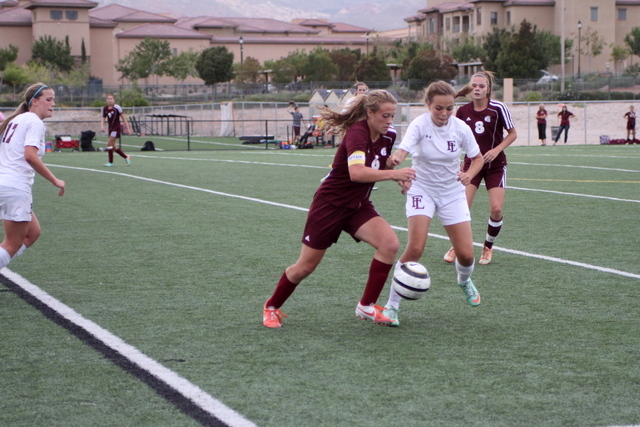 The Pahrump Valley girls soccer team knew they were going to have to play their best game against Faith Lutheran last Tuesday and they did. The game was played on the Crusaders home turf and Faith played as expected — hard and tough. According to Trojans Coach Pam Larmouth, the team played their best soccer up to this year despite coming up short, 2-1.

The Trojans (7-4 overall, 4-3 Sunset League) are now in fourth place and the Crusaders (10-3-2, 7-0) remain in first with six games remaining in the season as the second half of the season begins on Friday.

“Not every girl had an amazing game, but every single girl on the field did just what we asked of them: play harder than the opposing team, first to the ball and most importantly, fix your errors,” Larmouth said.

One of the problems the team had been having was lack of experience playing together, but knowing how important it was to play Faith tough seemed to bring the team together the coach said and the girls played liked they had been playing together for years.

The coach believes her team is finally playing in the positions they were meant to play in. She said this was the second game that the team played with the girls in these positions and it worked well. According to the coach, the girls backed each other up like true veterans.

“I have been telling them for most of the season that the only competition they will face on the field is the player that is willing to work harder than they are,” she said. “They did not have anyone on Faith’s team that worked harder than they did.”

Unfortunately penalties played a big role in the game. Larmouth said every score made during the game was a result of a referee call.

“Without the referee calls the game would be a tied game at 0-0,” she said.

Sydney Dennis scored the only goal for the Lady Trojans on a penalty shot that went right over the goalie’s head and curved into the net.

Paige Chafee was the most valuable player of the game with an amazing effort in midfield playing Alyssa Turner’s position. She was first to the ball and never stopped running.

Larmouth said the team was full of heart due to players like junior Yesenia Garcia and senior Brittany Klenczar. Garcia is one of the team’s leading scorers. The coach feels Klenczar is the leader of the team because she teaches and keeps the girls in position.

“She is the heart of the team and a great leader,” the coach said. “She never stops, in soccer as in other aspects of her life, she is a winner, she doesn’t know the meaning of give up and she leads this team by example and with thoughtful instruction.”

Senior defender Alyssa Turner, who has spent nearly half the season on the bench due to a knee injury, has been cleared to play and will play at Mojave (0-8, 0-7) on Friday at 4 p.m. Turner is another leader on the team and will add much needed experience to the defense.